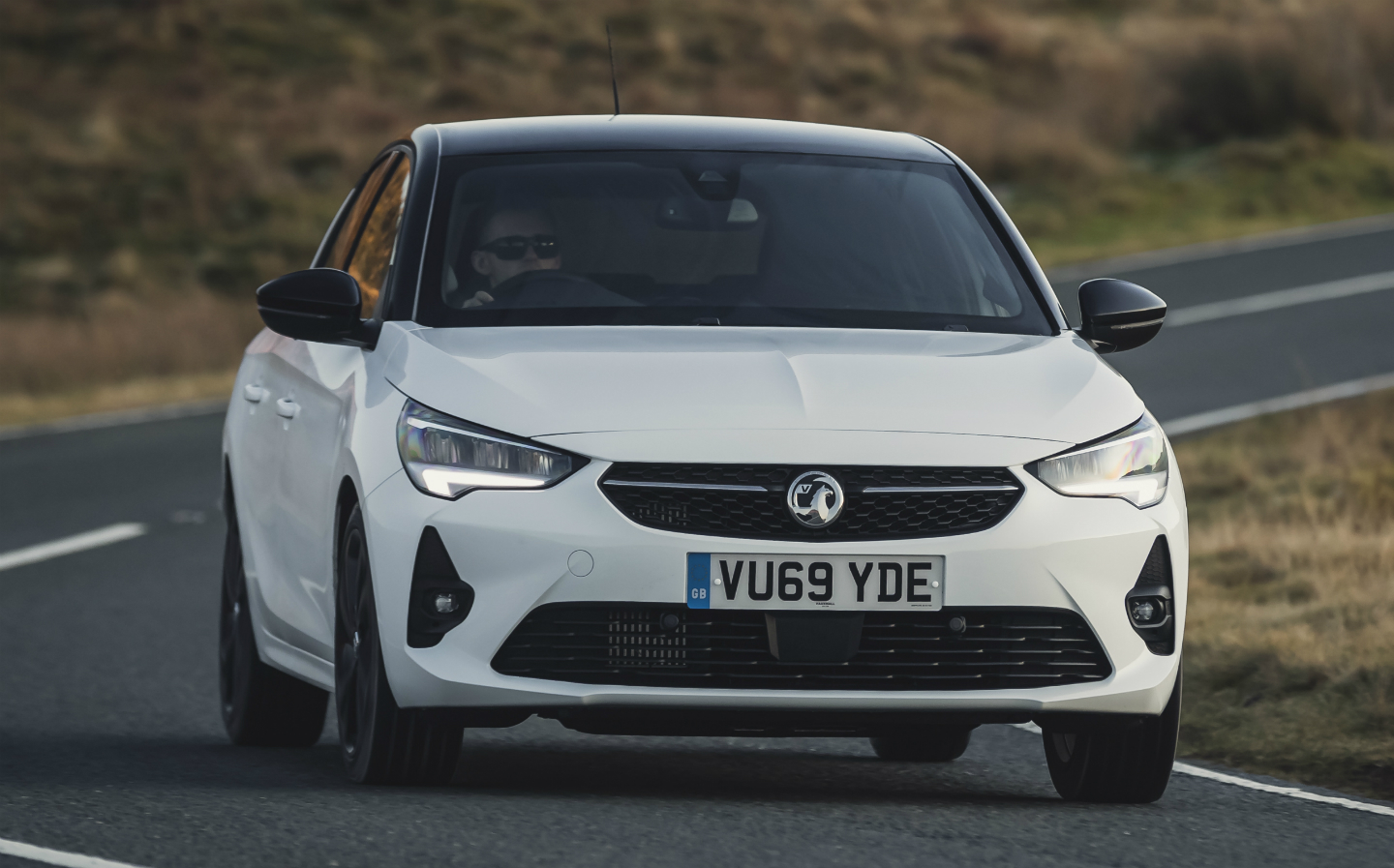 TO SAY that the automotive landscape in 2020 was a bit anomalous is something of an understatement. The coronavirus pandemic, which forced the country into lockdown from March to June, made it a very tough year for car makers and dealers with some of the biggest brands reckoning with financial ruin. New car sales fell by nearly a third during the year, the most dramatic decline since 1992.

There were two and a half months or so of steady buying at the beginning of the year, and sales seemed to recover during summer and the beginning of autumn. However, lockdown two — the sequel no one wanted — arrived at the start of November putting further pressure on the industry.

While pure-electric car sales bucked the downward trend, with sales up 186% on 2019, there isn’t a single model in the top 10 bestselling cars list for the year as a whole, as volumes were still low.

This might change over the next few years, though, with exciting new models arriving and the government’s proposed ban on the sale of petrol and diesel models due to come into force in 2030. 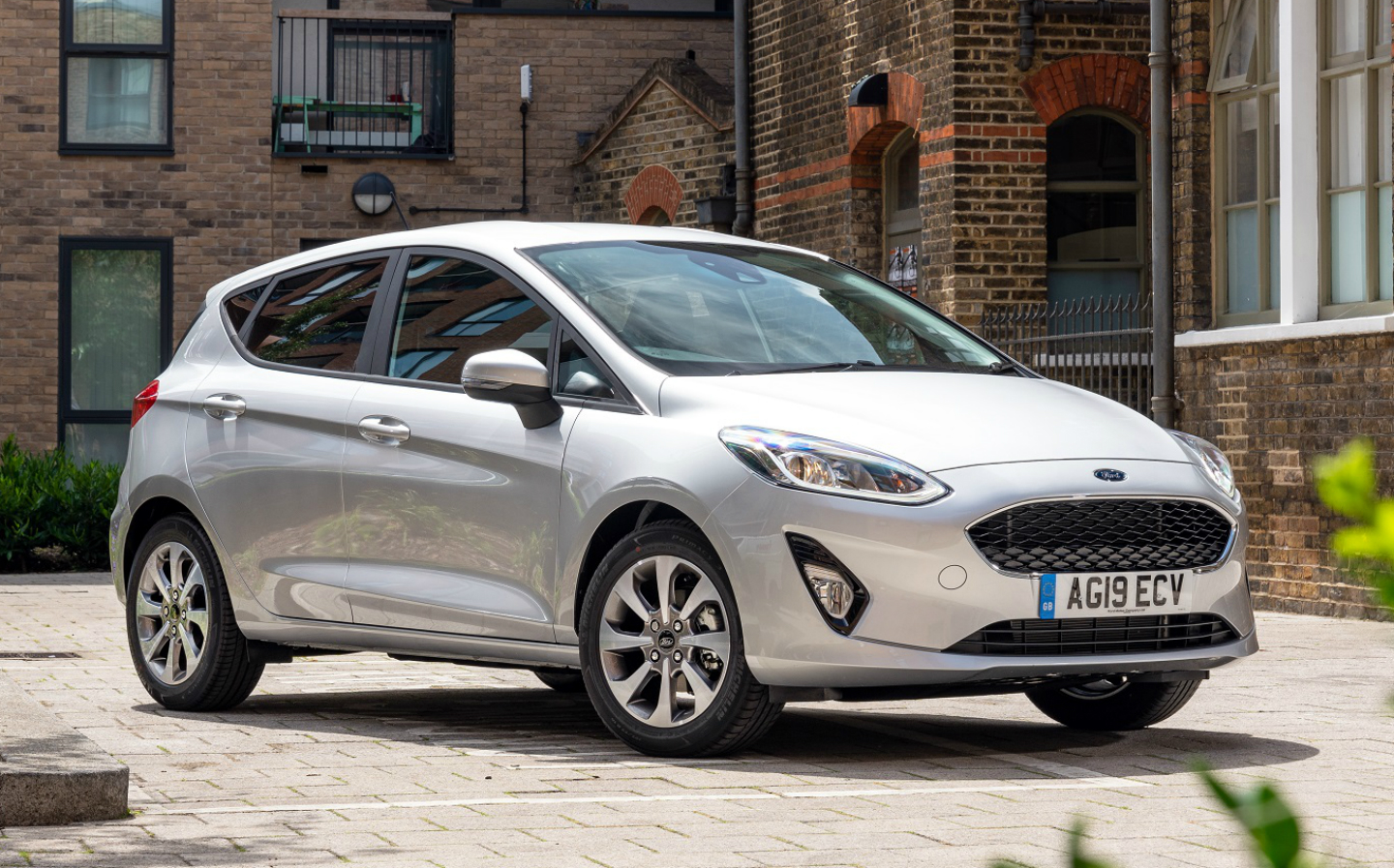 No surprises here. The Ford Fiesta maintained its place at the top of 2020’s best-selling cars list repeating the result from the year before. It’s no longer as small as it once was (they grow up so fast), but it’s still one of the best cars in its segment, being practical, spacious and really good fun to drive.

The Corsa has a bit to go before it catches up with the Ford Fiesta in terms of sales but Vauxhall has put in the work to make sure its supermini can go the distance with its arch rival. It relaunched in 2020 with good looks and new powertrains, including a pure-electric option for the first time, which has a very respectable 208-mile range between charges. It seems to be working, with Vauxhall topping the bestseller list at some points last year and slowly making up the gap to the omnipresent Fiesta.

The Corsa even managed to impress notorious Vauxhall-phobe Jeremy Clarkson, who found the new model to be “peppier and more eager” than one of its other competitors, the Renault Clio. The Corsa, he said, provided endless hours of joy to the bored 18-year old daughter of his girlfriend, Lisa, during the first coronavirus lockdown.

“She will certainly be the first person in human history to say that her only true happiness for a long time was a brown 1.2-litre Vauxhall Corsa,” he said. 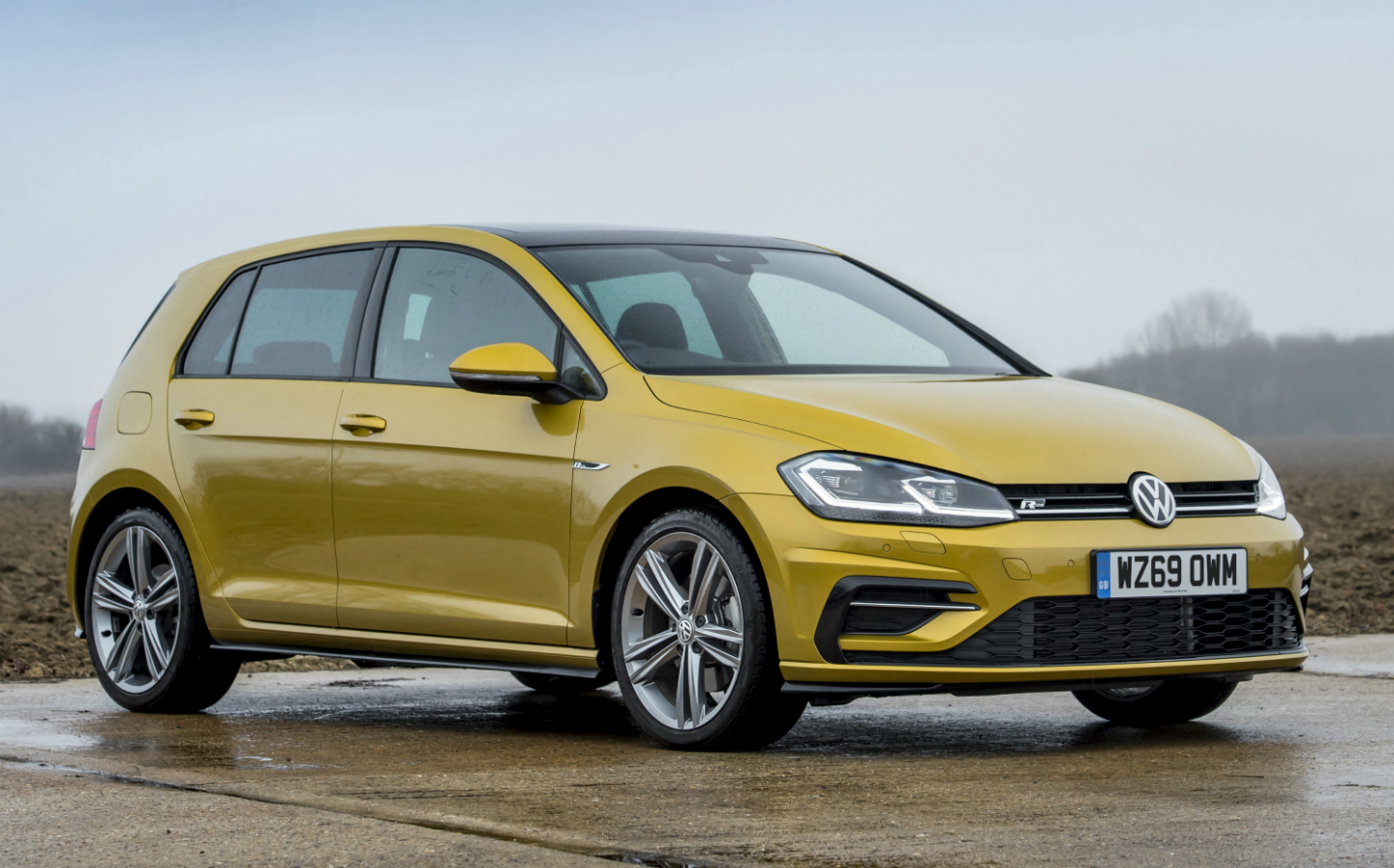 It would be something of a crime if the Golf didn’t make the top ten, wouldn’t it? It’s a ubiquitous sight on the roads of the UK, and the hatchback against which all others are judged.

The Golf has been climbing over the course of the year, and more powerful variants have arrived recently in the form of the much-adored GTI hot hatch and the even hotter Golf R . There are also new hybrid powertrains available on the eighth generation of the car, which could maybe sway customers trying to decide between the Focus and the Golf. 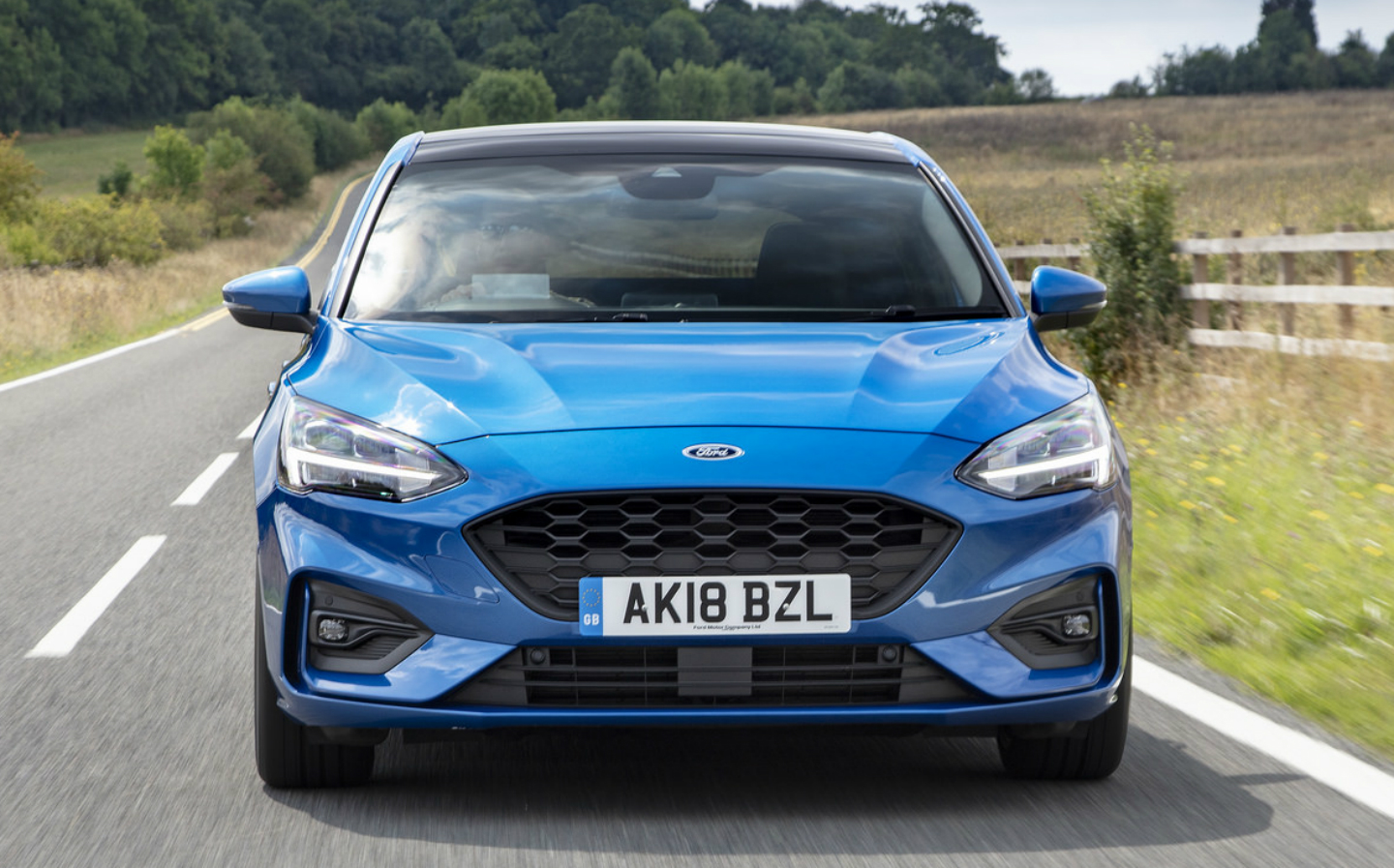 The Fiesta’s bigger brother was the second best seller in 2019 and remained hot on the supermini’s heels in the first months of 2020, but has slowly fallen behind and out of a podium position. Being outsold by the Golf, which is perceived to be slightly more upmarket, is a bit of a shock, in fact. Like the Fiesta, though, owners love that it’s great to drive, practical for the whole family and priced just about right. 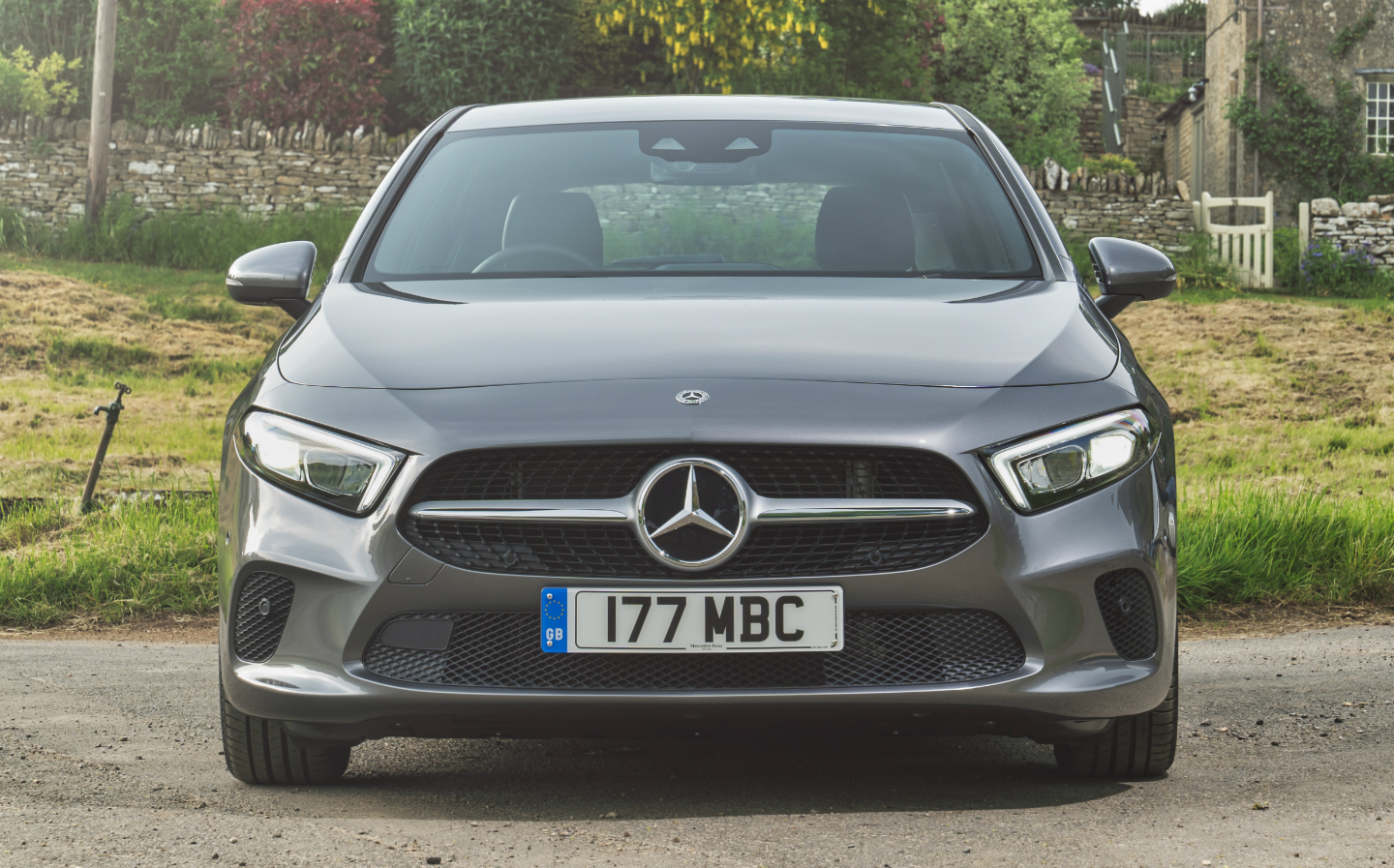 It’s not too often that a premium car maker like Mercedes finds itself in these kinds of lists but the entry-level A-Class has turned out to be a runaway success, accounting for more than a quarter of the company’s sales last year and leapfrogging the “everyman” Nissan Qashqai.

It was, in fact, the nation’s bestselling car in October — something that commentators have put down to it being the only car in its class that can currently be delivered as a plug-in hybrid.

The A-Class’ success is no surprise, with its slick design and premium tech — and a range of affordable deals that take some of the sting out of the pricetag. 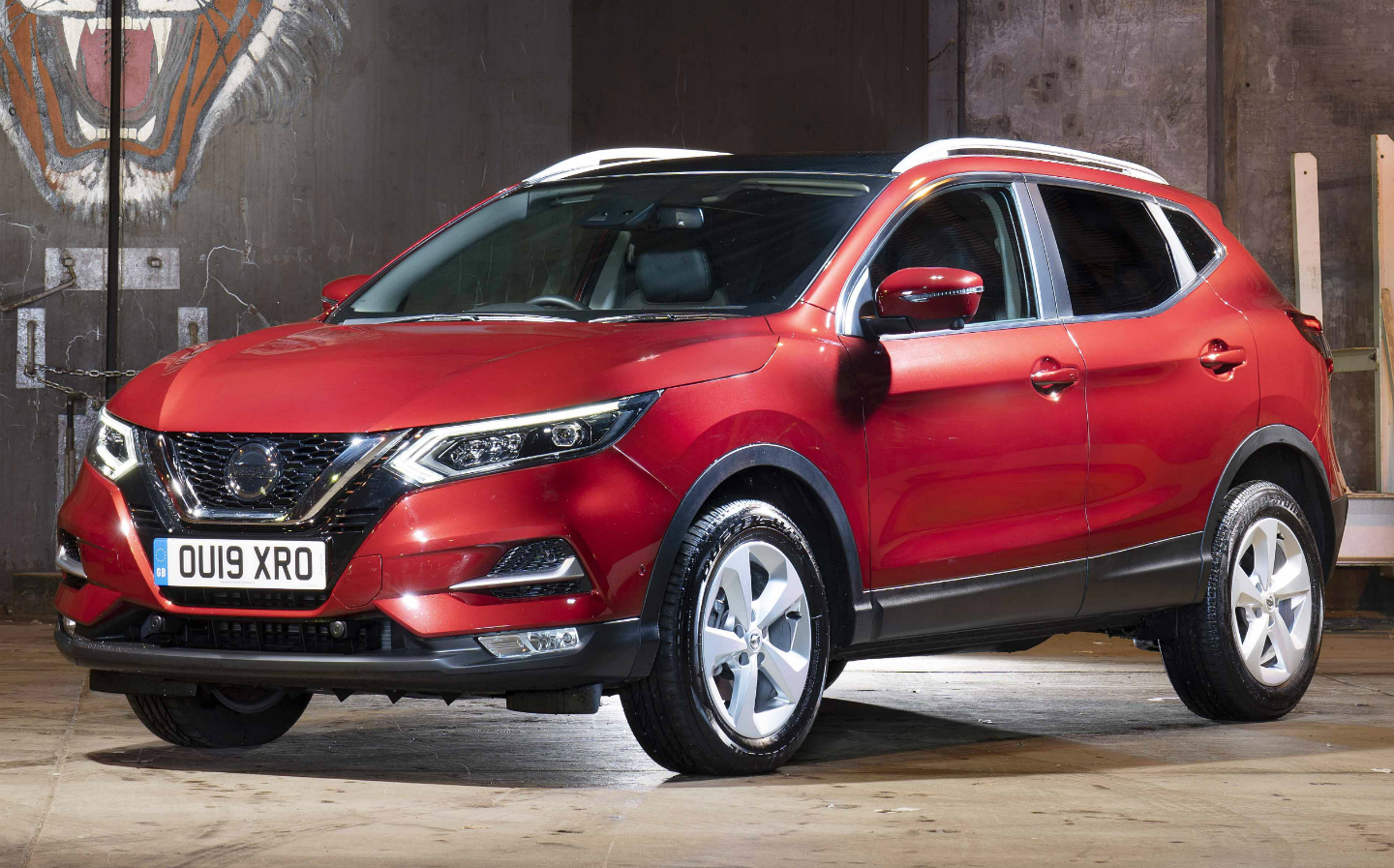 The Nissan Qashqai faces heavy competition in one of the industry’s hardest-fought sectors — the compact SUV market.

It’s fallen in the rankings since the beginning of the year, after being in third place back in February. However, the Qashqai is still the most popular compact SUV out there, despite an ever increasing number of competitors including the Kia Sportage, Ford Kuga and Seat Ateca. 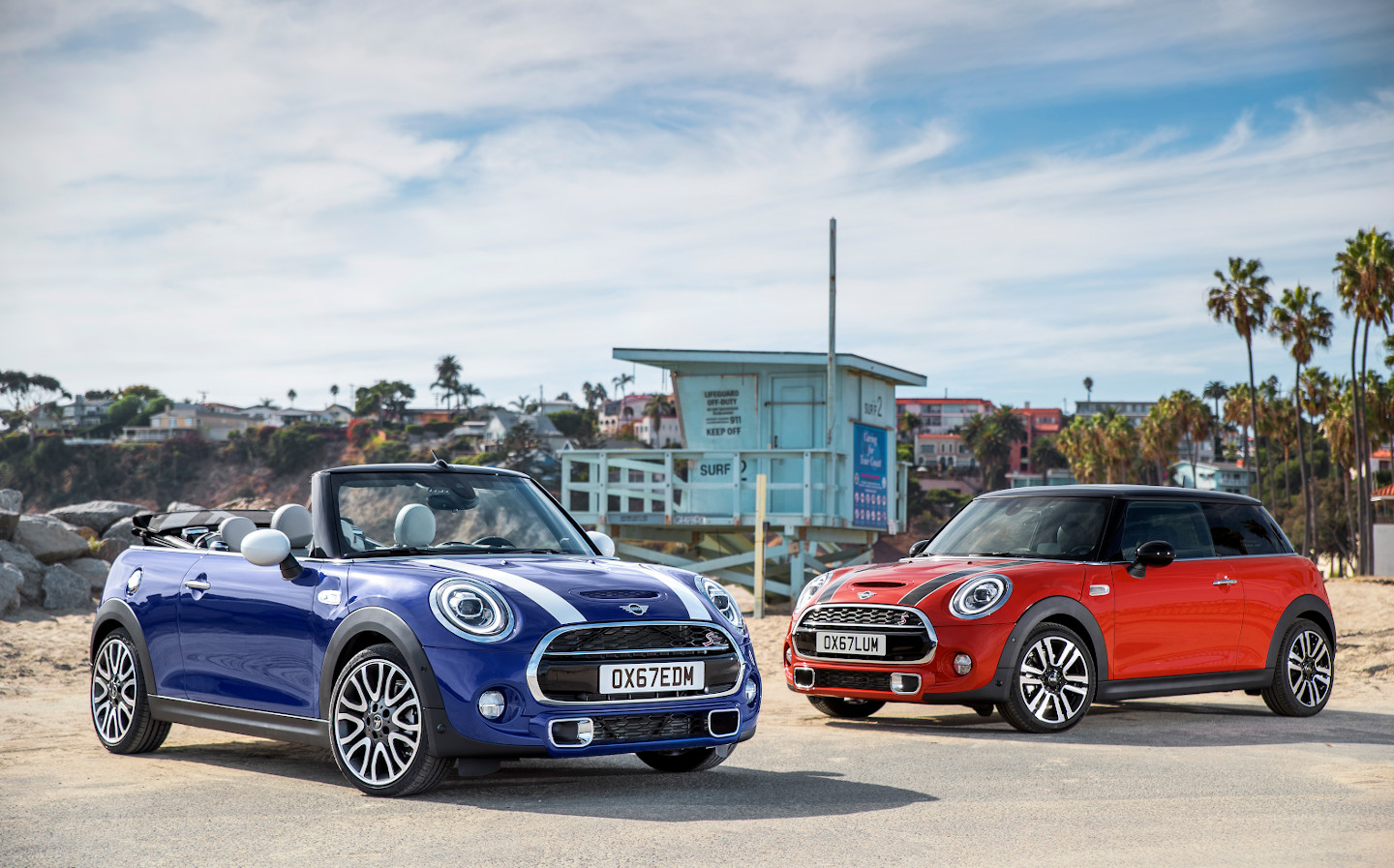 The Mini Hatch didn’t make the top 10 list at the beginning of the year, despite finishing in the points in 2019, coming eighth. However, after a good performance in June, when it was the fifth most popular car in the UK, the tenacious supermini has fought its way back onto the board.

And if you think the Mini Hatch is perfect in its current guise, grab one now, because the company’s boss has told Driving.co.uk that in the future it will get smaller (going against the grain), returning to its Mini roots.

Last year was a big one for the company, with the launch of the Mini Electric, the company’s first pure-electric car. 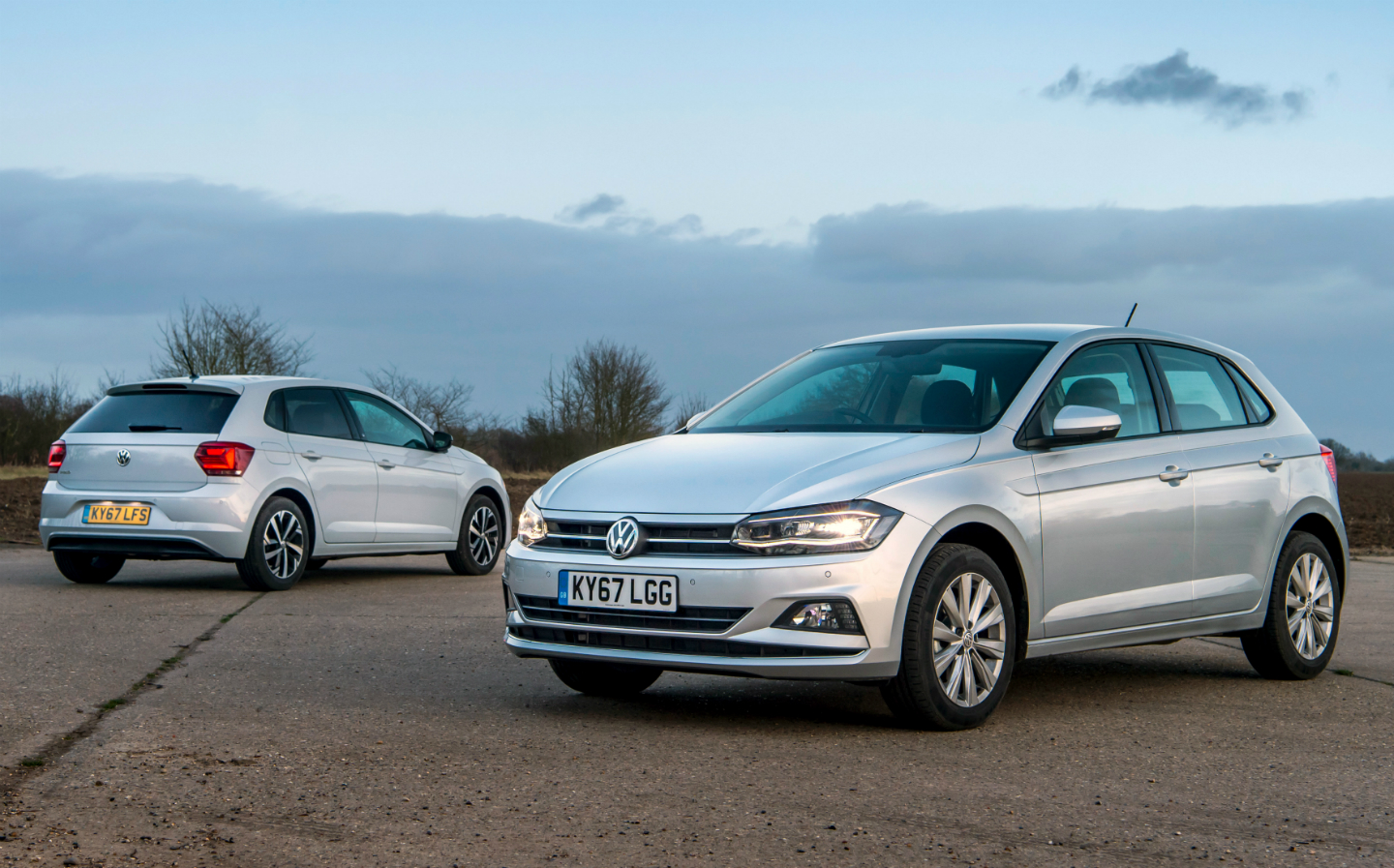 The Polo might live slightly in the shadow of its bigger sibling, the Golf, but it has forged its own reputation as a stylish supermini that feels slightly more upmarket than the Fiesta, the Corsa or the Yaris. It might not be hot on the heels of two of its three rivals in this list, but the Polo has held steady over the last year. 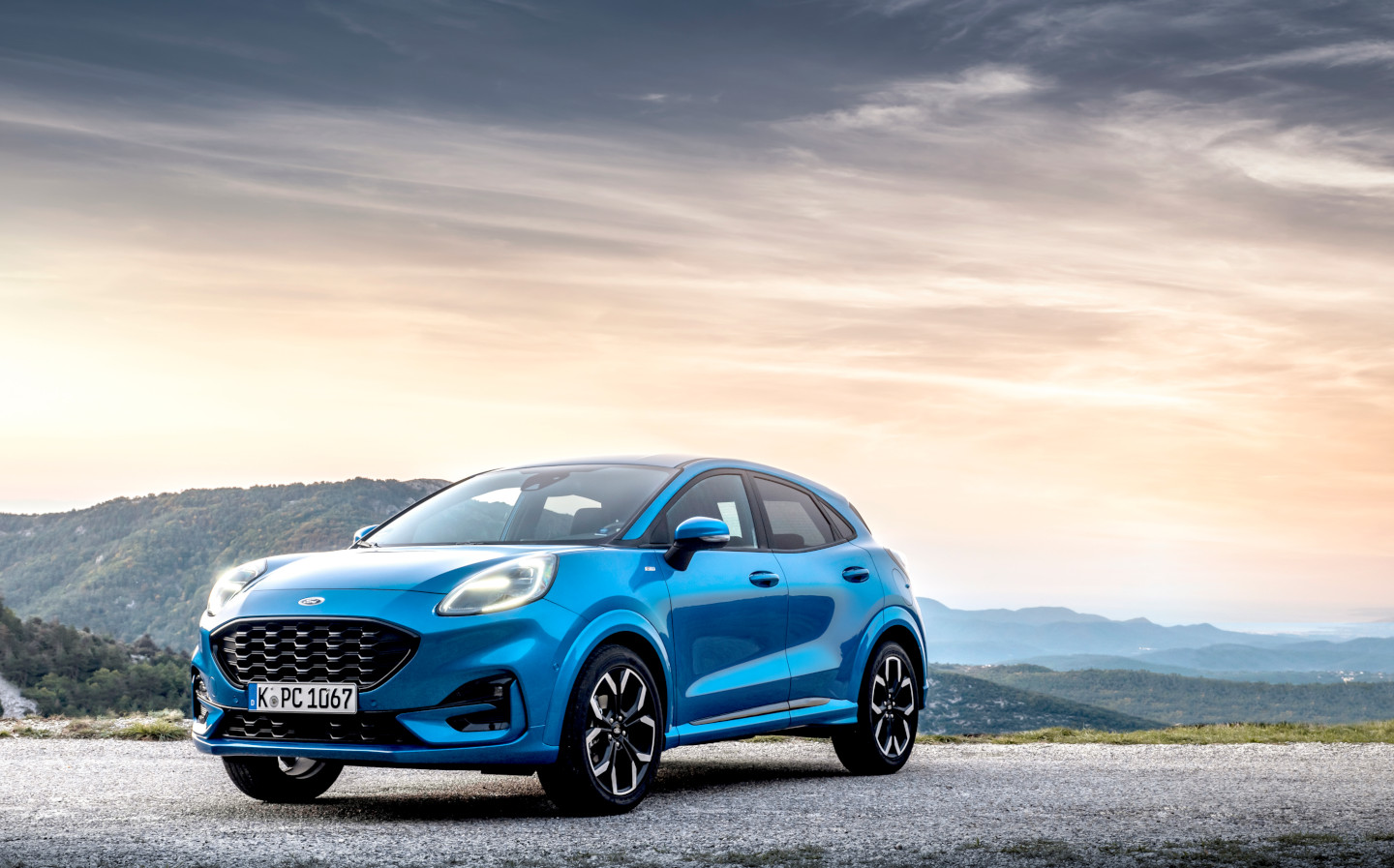 The Ford Puma was a brand new model last year and competes with a lot of cars in the compact SUV market — not least the perennial favourite Nissan Qashqai. It has done that by trying to be the most practical of the lot — it’s got a big boot with a deep “megabox” storage bin, complete with drain plug, beneath the floor. It also has washable seat covers. According to Jeremy Clarkson, it’s almost “as though this car has been designed by an actual person who leads an actual life”.

Based on the chart-topping Fiesta, and with a sporty ST version recently released, the Puma is going to look to hold on to its space on this list as long as it can. 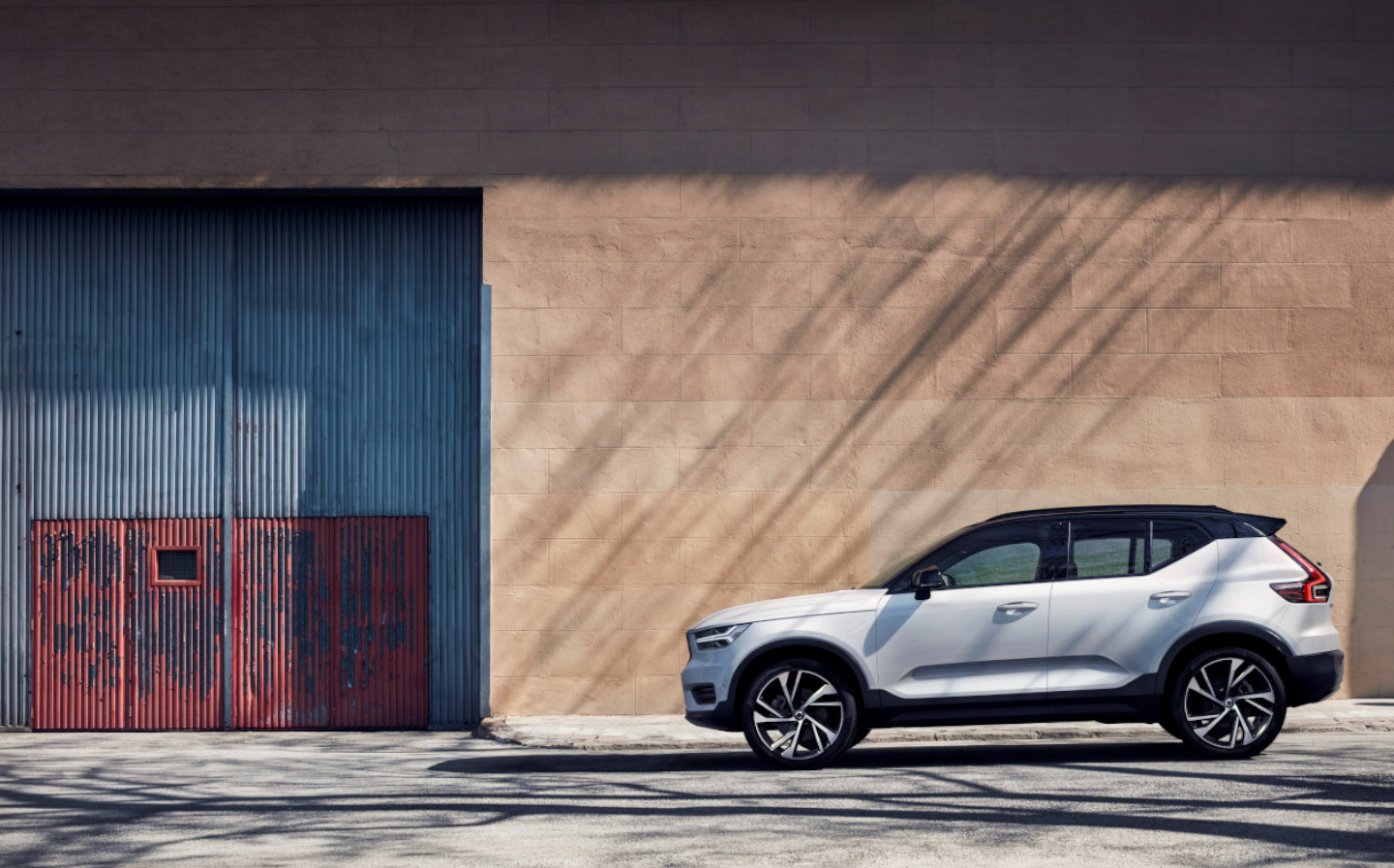 Volvo’s baby SUV has proved, rather unsurprisingly, to be the Swedish car maker’s most popular model in 2020, overtaking the BMW 1-series at the eleventh hour to grab the number 10 spot.  That’ll be partly down to its chic, minimalistic Scandi design, which The Grand Tour’s script editor Richard Porter described as “distinctive without being contrived, and chunky without being childish”, in his review of the car.

For those with a bulkier bank account and Thunberg-aligned sensibilities, there’s also the XC40 Recharge P8, which, as well as having the advantage of being practical, sensible, safe and comfortable, is properly fast.

What’s most popular: petrol, diesel, electric or hybrid? These are the figures from the Society of Motor Manufacturers and Traders on the best-selling car fuel types of 2020, and the year-on-year change. 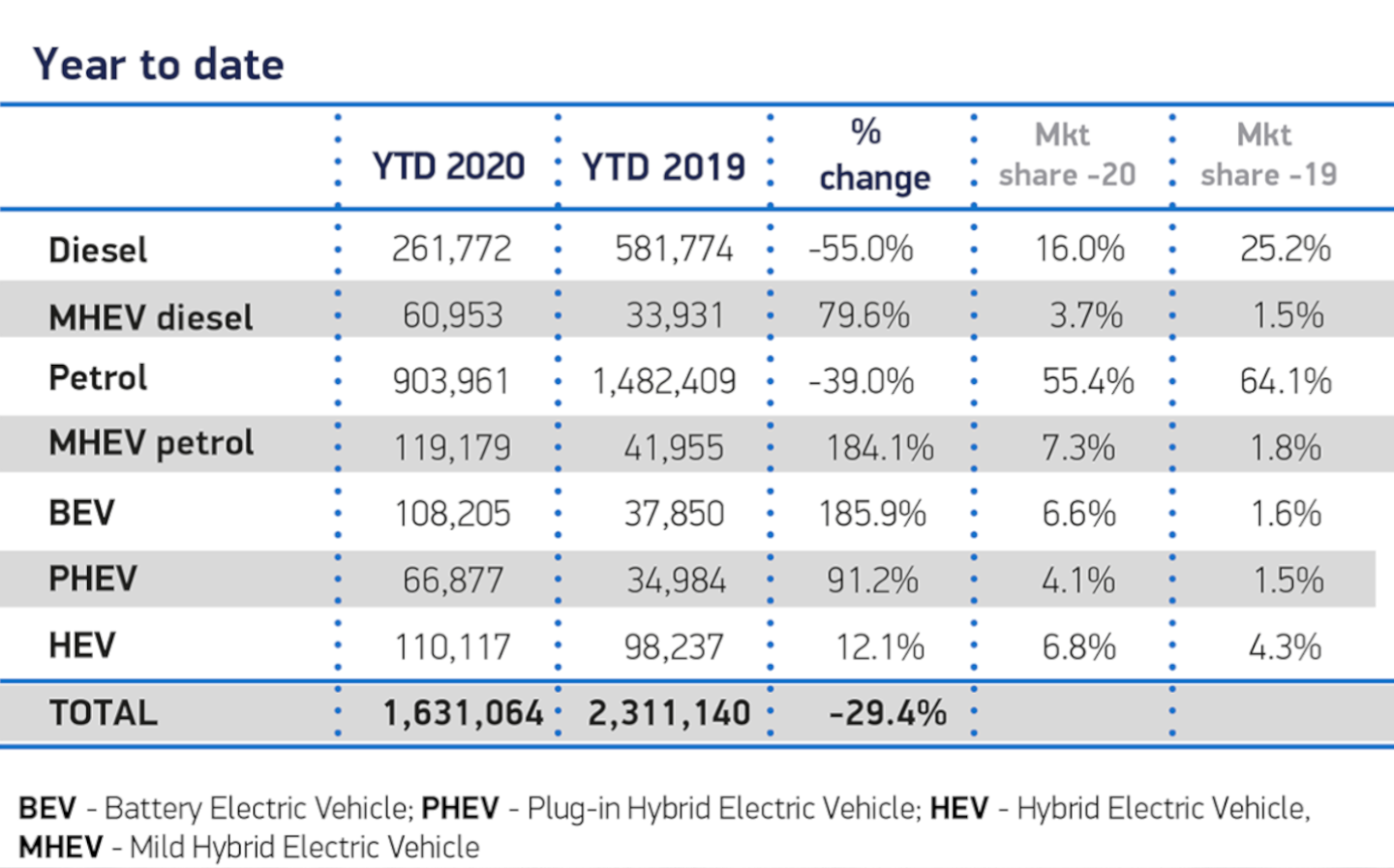 – Enjoyed our roundup of the bestselling cars in 2020? Then you might like to read about Jeremy Clarkson’s five best cars for 2020.

– If you’re looking to protect your car from bad weather, here’s our selection of the best car windscreen covers on the market.