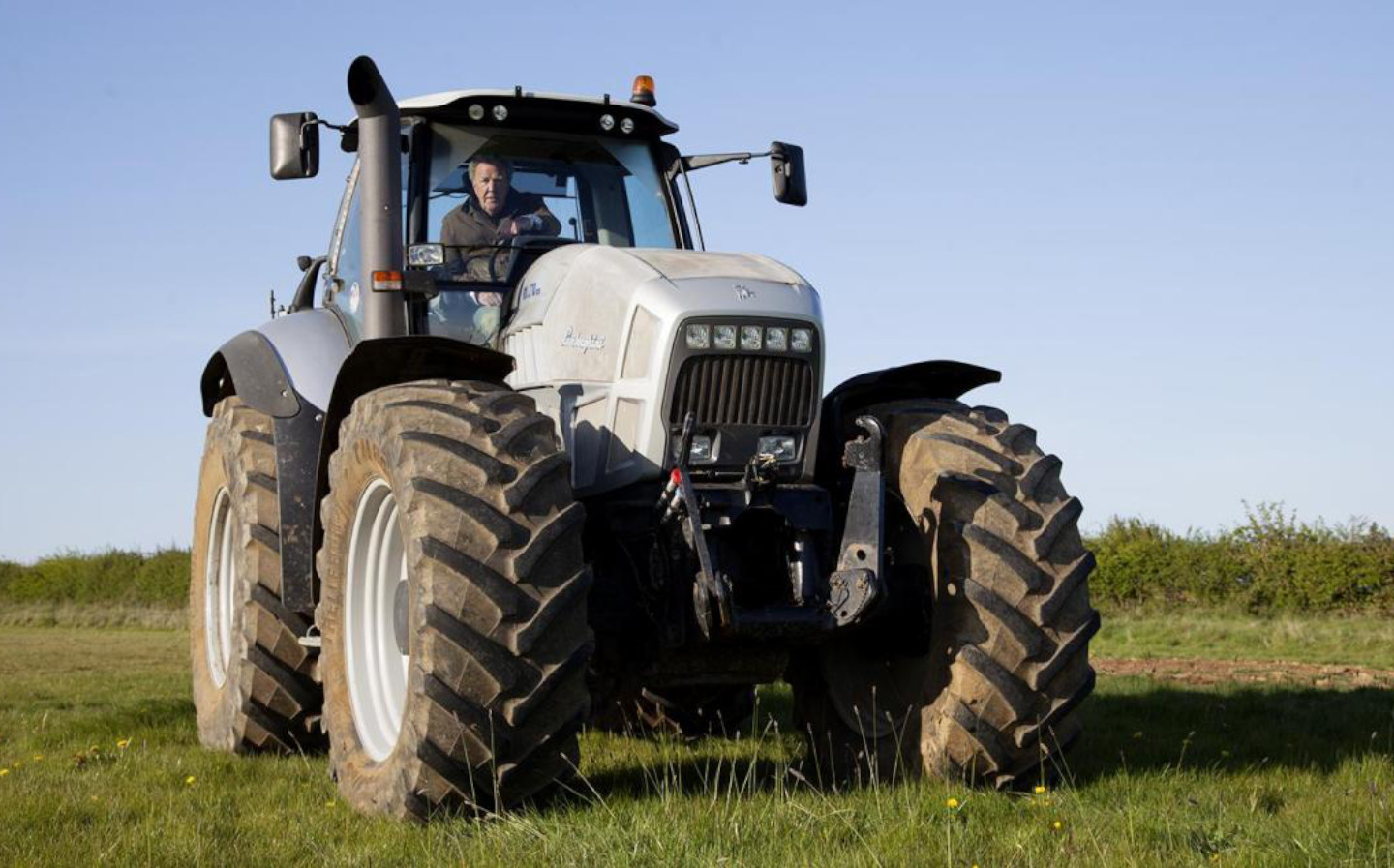 WHEN THE coronavirus pandemic brought the world shuddering to a halt in Spring 2020, it brought deliveries of press vehicles to a stop with it. While this was very obviously not one of the top-tier tragedies caused by the virus, it did cause Jeremy Clarkson and The Sunday Times a mild inconvenience in that, for the first time since he began jotting down his thoughts about cars for the newspaper nearly thirty years ago, the country’s most famous motoring writer could not write about cars.

What he decided to do is write about his farm instead. Clarkson has owned his farm, which he has called Diddly Squat, since 2008, and for the majority of the years since has paid someone with a vast wealth of agricultural knowledge to handle the farming duties for him. However, when that person retired a couple of years ago, Clarkson decided to take up the reins himself, and became a full-time farmer — while doing occasional trips to Madagascar for the Grand Tour or Manchester for Who Wants to be a Millionaire to finance his never-ending stream of costly agricultural mistakes.

Today, Clarkson’s Farm, a show chronicling one of Clarkson’s years working on the farm has premiered on Amazon Prime Video. In order to mark the occasion, we thought we’d look at nine things we’ve already learnt from Jeremy Clarkson about farming.

Clarkson has detailed the relationships he has with many animals, but none is more strained than his rivalry with sheep. The trailer for Farmer Clarkson illustrates this, with various scenes showing ovine antics, which include jumping over stone fences to escape the 61-year old, and kicking him in the knackers.

“They take absurd risks,” Clarkson writes, “and feign a lack of interest in everything, while deliberately being obstructive, stubborn, rude and prone to acts of eye-rolling vandalism.” To his mind, they are nothing but “woolly teenage boys”.

Read about Clarkson’s rivalry with sheep

2. Chainsaws are easy to lodge in trees

As you can imagine, one of the things that drew Clarkson to farming was the possibility of using absurdly powerful machinery. So, when undertaking some light woodland management one weekend (a task that he says you can’t “‘have a go’ at … any more than you can ‘have a go’ at underwater oil-rig maintenance”), the natural tool of choice had to be a chainsaw.

However, after a lot of sweating, swearing and one near death experience, Clarkson decided that he’d be better off paying someone with a bigger machine to do the heavy work. The only use for chainsaws, he says, is “chopping off a drug dealer’s arms”.

The summer of 2020 was, among other things, extremely dry. That spells trouble for farmers, who obviously depend on rainfall for the prosperity of their crops. So, in a frantic attempt to irrigate his broad beans, Clarkson attempted to pinpoint the location of a series of underground water pipes that a 19th century owner of his land had installed.

So, on the advice of a neighbour (“called Charlie, who may be mad”), he set about locating the Victorian pipes with a pair of metal coat hangers. Water divining, also called dowsing, is sometimes used in water parched farms in California, and is considered by many to be a pseudoscience.

“In my mind water divining is like ley lines and horoscopes,” wrote Clarkson. “It’s nonsense. Two coat hangers will not react to the presence of water. Except for one thing. They do.”

Read about Clarkson’s experiments with dowsing

4. Farming is the most dangerous job … in the world

According to the Health and Safety Executive, the farming, fishing and agriculture industry accounted for 20% of all workplace deaths in 2020, and farmers are 18 times more likely to suffer a fatal workplace accident than the average worker.

Clarkson can see why, especially when he tries to fit tools to the back of his tractor, which involves attaching sharp implements to an invariably greasy surface, while standing on mud in the dark. “Imagine covering yourself in baby oil then playing Twister in a Burmese sawmill. Then you’re on the right page,” he said.

Read about Clarkson’s brushes with death 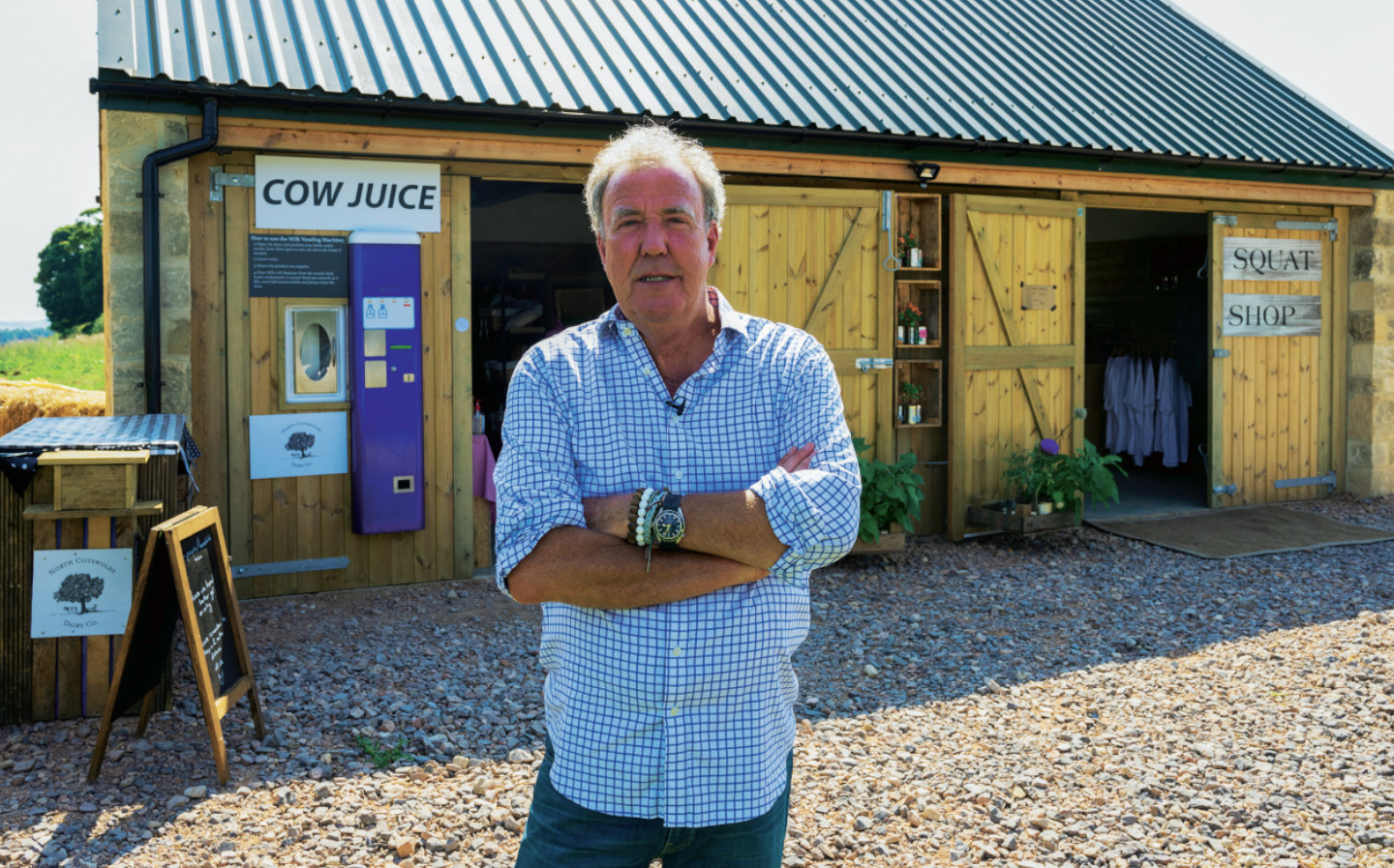 5. Government red tape is the bane of farmers

Clarkson has written repeatedly about how pestilent government can be for farmers. Interference comes in many forms: the writer has beef with everyone from the parish busybodies who take issue with the colour of the roof of his farm shop, to the Department of Agriculture, Environment and Rural Affairs, who track farmers using satellites and force them to adhere to a whole host of obscure rules.

And Brexit has only served to intensify this issue: attempting to diversify his crop to include Durum wheat, which is used to make pasta and is more commonly grown in France, Clarkson found his consignment stuck at the channel, entangled in red tape. “And there was no point asking the French for clarification,” he wrote, “because all you get is the Gallic shrug, a universally recognised symbol of complete uninterest. Tinged with a hint of ‘Well, you shouldn’t have left the EU, should you.’”

6. Farming is incredibly important for the environment

Well, we knew this already but Clarkson is excellent at illustrating the point. One of the effects of his transition to farming is that he has become a vocal supporter of rural conservation and eating seasonal produce, rather than transporting exotic and environmentally unfriendly items — in one recent interview, he claimed that eating two avocados is as bad as driving a VW Polo for a year.

“If you want to do something for the planet, eat what’s in season and eat what has grown just down the road,” he has written. “That is how you solve it, not by opening the countryside up to ramblers and then buying food from abroad.”

He cares about this so much, in fact, that he even put to paper a few of his favourite recipes, almost all of which make use of home-grown ingredients.

7. You can still buy Lamborghini tractors

Any petrolhead worth his salt will know that, before it made bedroom-wall-poster V12 supercars, Lamborghini was a manufacturer of the rather more humble tractor. What most people may not know, however (over at Driving.co.uk we certainly didn’t), is that it is still possible to buy one.

Lamborghini’s tractor-making business was sold in 1973, though tractors are still made bearing the famous name. They are made in Germany “but they still look Lambo-mad”, says Clarkson. “If an Aventador were to make love to a spaceship, this is what you’d end up with.”

8. Vauxhalls now give Clarkson the fear

Clarkson has never been the biggest fan of Vauxhalls. When he was asked to review the Vauxhall Vectra in 2002, he instead opted to write about the Reed Warbler, a small British bird, which he thought was a lot more interesting than the car. And he has since described Vauxhall’s offerings as “automotive wallpaper paste”.

However, becoming a farmer has intensified Clarkson’s Griffinphobia, as all the representatives of the Department of Agriculture, Environment and Rural Affairs who turn up at Diddly Squat farm to stop him from doing something drive Vauxhalls.

In a 2020 review of the Vauxhall Corsa, he wrote: “When I see an Insignia coming into the yard, I dive into a vat of slurry to escape, because it’s always someone with a clipboard and an expenses chit and an encyclopaedic knowledge of the obscure rule I’ve just bent. I can’t remember what my teachers drove, but I bet all the annoying ones who enforced the rule on top buttons being done up had Vivas.”

Read what Clarkson had to say about the Vauxhall Corsa

9. Pigs are the Steve McQueens of the farming world

Sheep are not the only ruffians on Diddly Squat farm. Deciding that he’d like to start eating home-grown bacon sandwiches, pork cheeks and his own signature pork and pepper pasta, Clarkson bought two pigs (named Stephen and Stephen, after Fry and Hawking, due to their intelligence) and began to rear them.

However, his plans to become a farm-to-table establishment were hampered by the fact that his hogs are too congenial. Not only are they clever, but they’re cute and have the brio to constantly try and escape their pen. As Clarkson wrote: “Yesterday morning I noticed they’d turned their house into a vaulting horse and in the afternoon I received a call to say that one of them was riding a motorcycle down the fence line between Germany and Switzerland.”

Owning Stephen and Stephen, in fact, has put Clarkson off eating pork completely.

This article affiliate links that have been chosen independently by Driving.co.uk journalists, and our reviews are unbiased. We may earn revenue if you click the links and buy the products, but we never allow this to affect our opinions.