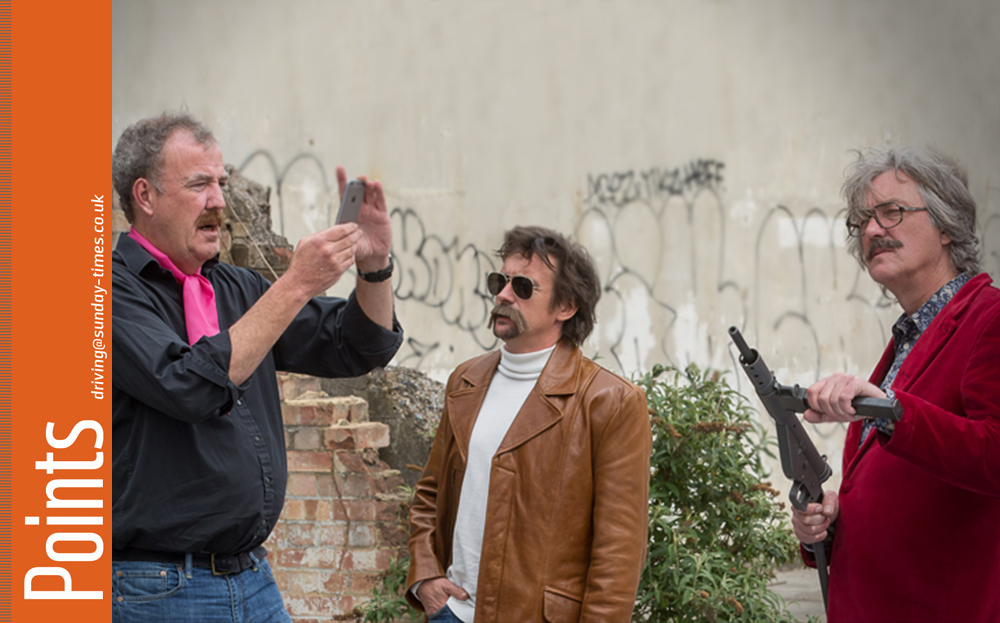 The show must go on

It was so good to see Jeremy Clarkson, James May and Richard Hammond together (April 26). There’s magic in these three amigos. Surely the Top Gear “incident” would have been sorted out much more sensibly in almost any other commercial enterprise.

I have worked in two advertising agencies, a bank, a building site, a restaurant and a betting shop and in each there has been some sort of physical altercation between staff that, in all cases, was sorted out without shutting down the shop.

I was appalled at the behaviour of Clarkson and then quite shocked to read that so many people still support him. As a point of principle, I do not read his column in Driving. To have all three former Top Gear hosts contributing, thus recreating the show, is too much.

Sat nav screens measuring 6½in as standard on BMWs with the option to upgrade to a larger display (“Ditch the map: sat nav to be standard on all BMWs”, News, last week)? More distractions for drivers? No. The best sat nav is obviously voice only.

Take your eyes off the road for two seconds at 30mph and the car will have travelled 90ft; take them off for two seconds at 60mph and it will have covered 180ft. That is why a woman passenger died on a slip road off the M18 when a texting lorry driver crashed into her car at 55mph. If TV screens are banned from the driver’s vision, why not other displays?

Drive a decrepit diesel-powered vehicle through a Highland gale and you will not affect the health of the locals. Do the same during a sultry London summer and you certainly will. Pollution depends on usage, not ownership, but in both cases you are likely to be penalised by money-grabbing politicians.

Rather than being made to pay more than the current vehicle tax, shouldn’t I pay less to encourage me to keep my diesel? I bought my Audi 12 years ago; it’s done 70,000 miles at an average 53mpg and its good condition suggests it will go on. By contrast, my wife’s brand-new car is zero-rated, has a claimed 65mpg but returns less than 30mpg.

Reader David Mcdonald received a speeding ticket for driving at “422mph” in a 30mph zone (“On the record”, Points, last week). He has pleaded not guilty but I advise him not to be optimistic. Sixty years ago I received a summons for riding my motorcycle across a zebra crossing as a lady began to cross on my far side. The policeman claimed I was riding in an easterly direction. If true, it meant he would have stopped me before I reached the crossing.

The magistrate said the law did not concern itself with trifles and fined me two guineas, reimbursed by my aunt and my grandma. I hope Mr Mcdonald is as fortunate.

I was recently caught by a speed-trap van parked at a bus stop. I’ve noticed them waiting in other spots where ordinary motorists would be penalised. They’re not police vehicles, either, but subcontractors to the Kent force and to the Met.

You’re no fund any more

Your feature about the political parties’ plans for motorists makes several references to “road tax” (“Green means stop: what the parties have in store for motorists”, last week). I thought everyone knew there was no such thing.

The Driver and Vehicle Licensing Agency is mugging us all since the abolition of tax discs (“Licence to print money” Points, last week). The payment of vehicle tax in monthly increments was to save on printing costs for paper discs, but now there is no reason it can’t run from the moment you pay it — just like MoTs and insurance.

Reader Hugo Rose needs to know three things about the Bugatti Veyron (“Road to excess”, Points, last week). Its successor — the Chiron — is due out next year; the Veyron was an engineering masterpiece; and these groundbreaking cars introduce new technology that trickles down to all vehicles for years.

Further to the letter from Jeremy Haworth on personal numberplates (“King’s ransom”, Points, April 26), I recently saw the numberplate UR 5ILLY on a black Ferrari. Unlike Mr Haworth, I did not have the chance to talk to the driver . . .

Read all about it

I was recently collecting my newspaper when the gentleman in front of me bought The Sun and the Daily Star. I followed him out of the shop. As I got into my Ford Mondeo, he was getting into his Rolls-Royce. I laughed for days.

The main reason for having 20mph zones is to make people walking and cycling feel safer, not simply about collisions (“Limited usefulness”, Points, April 26). In Holland, cars are treated as guests in many residential areas.

Rough with the smooth

Can anyone explain why comfort and a hard suspension are still problems in modern vehicles? I was driving Vauxhall Cavaliers and Astras 25 years ago that were vastly superior in ride quality compared with today’s so-called premium brands. I drive an Audi A3 and it can be bone-shakingly uncomfortable on some surfaces.