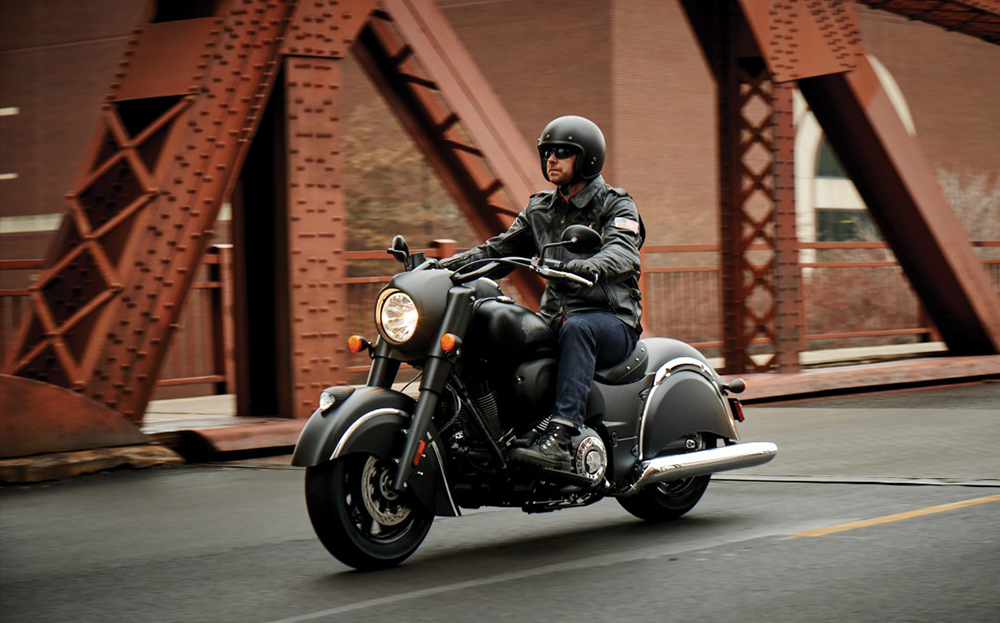 I DIDN’T start riding motorcycles because they were popular. They weren’t, in the 1980s. Well, they weren’t popular with the mainstream — bikes were still for ruffians and rebels. I sat astride my metal pony with a steely glint in my teenage eye and a sneer skewed across my spotty mouth.

Now every blighter’s got a bike. Every week another rock star, film star or reality-TV star fresh from baking in a jungle jumps straight onto a bike, followed by a fleet of documentary makers and PR advisers. And I hate it. Which is why I’ve always been pretty happy to hide that particular light in my life under the bushel of privacy, or what remains of it.

I still ride bikes but I do so privately. I wear a full-face helmet so people can’t recognise my once-famous mug, and I ride for purpose, to London from the country, rather than hang out in famous cafes full of famous people being famous with bikes. I do the odd bike-related charity thing, because that feels kind of personal. If it’s raising money for an air ambulance or a new bike to rush blood to hospitals, then I’ll happily lend my ugly little mush to the cause.

But beyond that, biking is a private affair. Mine and mine only. Which makes the Indian an interesting proposition.

This is not a subtle bike. Yes, it’s finished entirely in satin black, including most of the chrome. But it’s big enough to have its own horizon, and that alone makes it stand out. The one I’ve got is standard, which means, the man handing it over tells me, with quite a sad face, that it’s got the factory pipes rather than the loud aftermarket ones. And it is the basic model, he stresses, so it’s not got all the bells and whistles. Which means my luxuries are limited to keyless start and cruise control. Which is at least one bell and one whistle.

This is not the first time the Indian brand has been revived. At one point it seemed a weekly occurrence. There have been many legal wrangles over the name and many lawyers have made a lot of money, which they have probably spent on Harley-Davidsons.

Biking is a private affair. Mine and mine only

The two brands were once America’s biggest motorcycle producers, but a cock-up over who would make what for the US army in the Second World War, and failure to advance technologically, meant Indian died while Harley went on to bellow its “potato-potato-potato” war cry around the world and dominate the market for essential transport for Hell’s Angels and Hollywood glitterati. 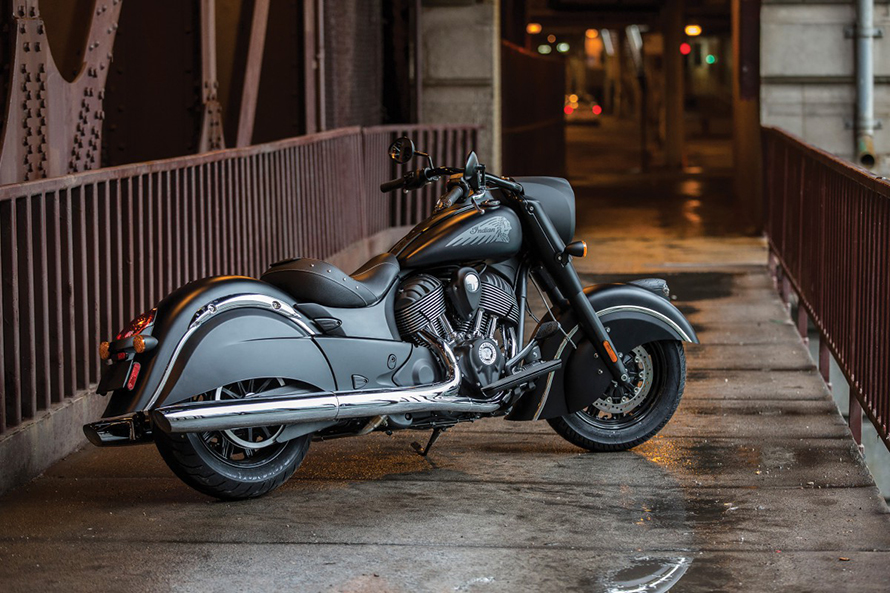 But the Indian name has echoed on, resonating down the years. It’s an alternative to the Harley, something as yet untainted by weekend biker accountants in thousand-quid jackets.

I should point out that I already have an Indian. Mine, though, is a 1946 Indian Chief, and while the similarities in the art deco lines around the huge, swooping mudguards are clear, it’s an entirely different proposition. It’s finished in a traditional pastel blue. The seat is shiny brown leather and looks like something favoured by a transvestite tractor driver.

When it first arrived, it stood in my yard, where I and a few biker friends looked at it for a while, mugs of tea in hand. “What you gonna wear to ride it then, Rich?” one of them asked. It was a good question. Racing leathers would be wrong, as would modern textile waterproofs.

“Cowboy boots, feather boa and a leotard would look about right. Top it off with a showgirl’s headdress,” another said. He had a point.

“Cowboy boots, feather boa and a leotard would look about right. Top it off with a showgirl’s headdress,” another said. He had a point.

On the original Chiefs, the throttle was on the left grip. The clutch was operated with the left foot, and the gears with a lever on the left of the tank. Which is why pretty much everyone who rode one died in a crash. The new one, though, is modern-day familiar. Just really big. Getting on it is like throwing a leg over a liner.

I’m glad of the standard exhausts. The thing makes enough noise on a visual level not to require actual aural assistance in grabbing attention. And the noise is warm, full and enveloping: a woolly cardigan with a straight razor in the pocket, rather than a leather jacket with tassels. Anyone hoping to join from a side road holds back until this matt-black freight train has rolled past. I thread it along country lanes towards bigger roads, hoping not to need a three-pointer on tighter bends. I don’t. 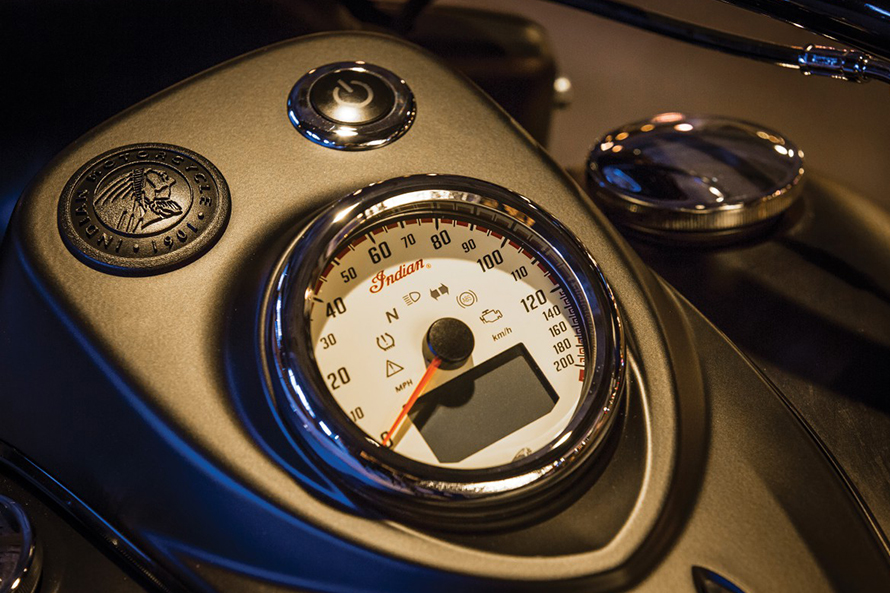 The weight, though massive, is low down, and it’s only going into downhill bends that I’m aware of it, feeling as if I’m rolling round the corner rather than driving through it. On the flat, the 1.8-litre V-twin Thunder Stroke III engine (I know — but if that doesn’t make you giggle, pull funny faces at yourself in the mirror and lighten up, for God’s sake) may cough up only 92bhp, but does so from an rpm low enough to count on one knee.

Weirdly, I want to change up constantly. I quickly run out of gears because I’ve shifted up each time the revs have passed the “3” mark and not needed to change down again.

It’s brisk but not in a sports bike way, more in a skip-off-a-cliff way. I’m worried that the footboards, like two shed doors stuck out flat on either side, will touch down when I corner. They don’t. On other models, with fairings, the rake is steeper to counter the weight and quicken the steering. On this, the lightest Chief, the rake is shallower, but it still turns in well enough for what it is.

A biker comes the other way. Refuses to return my nod. Another does the same. And there’s the answer. Biking is too popular. Everybody who isn’t doing it at least approves of it. But even bikers don’t like this creature. And that alone makes it work for me.

Clarkson, Hammond and May Live

The first post-Top Gear live show hosted by Clarkson, Hammond and May is in Belfast on May 22. For details, see tinyurl.com/ClaHamMayLive