Share Article
The Mustang that Waitrose would sell you
Pros
Feels light and poised
A raw – exciting, even – drive
I'd buy it
Cons
There are many rivals, and all are good
The bonnet is so vast you could land a helicopter on it
If you value your nose, avoid the optional carbon brakes
Cars > Mercedes-Benz > Mercedes-AMG GT 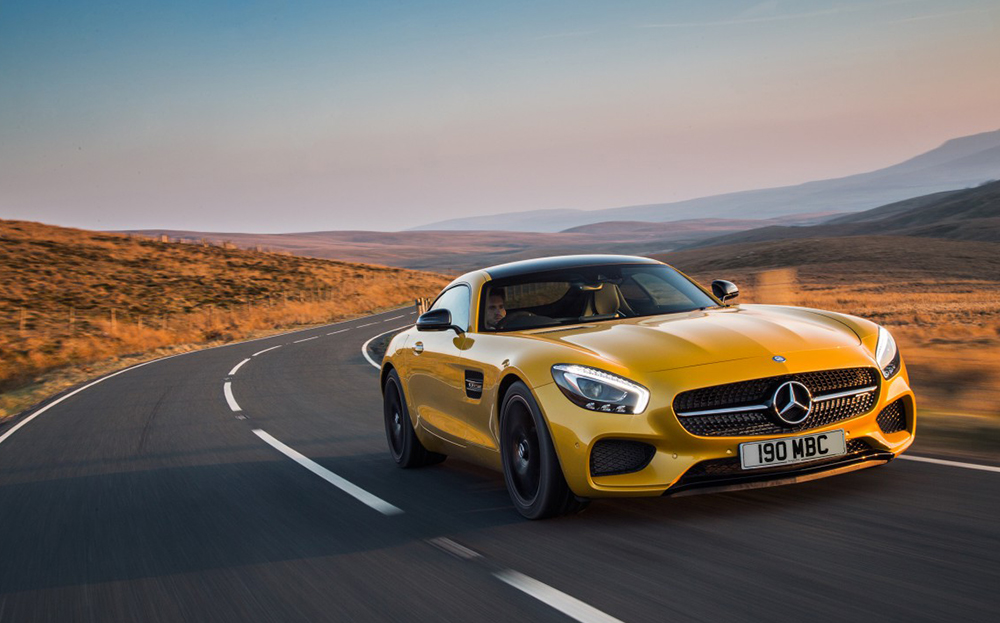 HAVE YOU ever tried to send a text from the back of a London cab? The suspension is so catastrophically hard that it’s just about impossible. And even if by some miracle you do manage to write vaguely what you had in mind, you will go over a speed bump as you’re sending it, which means it’ll go to completely the wrong person.

Life is a lot more smooth in the new four-wheel-steer Mercedes Vito Taxi vans, but these too come with a drawback. The windows don’t go down, so after half a mile on a hot day you start to feel like Alec Guinness in that box.

Of course life is a lot more comfortable — and cheaper — if you use Uber, and yet somehow I just can’t bring myself to make the change. I don’t know why. I’m not the sort of person who won’t have a mobile phone because “there’s nothing wrong with a good old-fashioned red phone box” and I’m not writing this on a typewriter. But there’s something about Uber that feels wrong.

Browse the used Mercedes cars for sale on driving.co.uk

Maybe it’s the name. Nobody likes a word that begins with U. Or maybe it’s the way Uber cars are driven: I follow them sometimes and it’s as though the driver has just ingested a litre of pethidine. And then there’s the smell. It’s an aroma that comes with its own mass and just a hint of gravity. It’s revolting.

There’s another thing too. I wonder what damage Uber is doing to the Mercedes-Benz brand. Because nobody is going to get out of an Uber E-class and think, “Mmmm, yes, I have got to get one of those.” The suspension is invariably worn out, the upholstery always has at least one worrying stain and the dash is always festooned with wires to power the driver’s sat nav, which, after you’ve made 16 left turns on the trot, you notice is programmed to work only in Kampala.

I know Mercs aren’t like that in real life. I know they are beautifully made and sensibly equipped and strong. But you don’t. To you, the Uber customer, Mercs are vomitous and horrid. 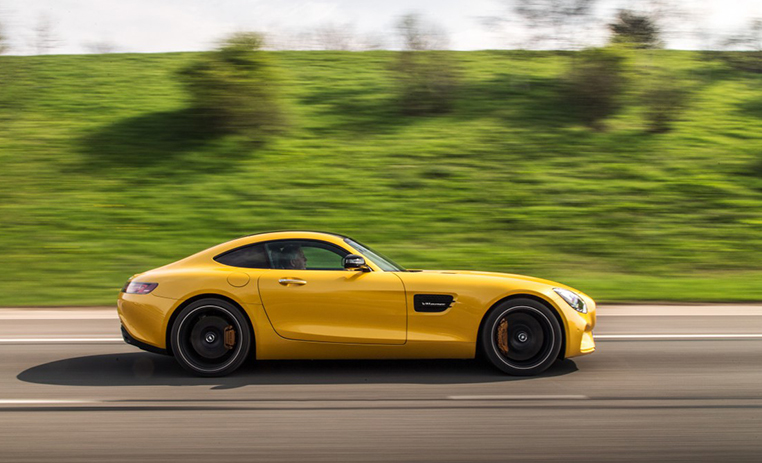 Which brings me neatly on to the problem you have if you are in the market for a six-figure GT car. It’s a nice problem, the sort of thing you could sort out in your head while lying on your back on a summer’s day in a field full of wild flowers. It’s this: there are now many GT cars costing six figures — or thereabouts — and they’re all very, very good.

There’s the Aston Martin Vantage, the Jaguar F-type, the Porsche 911 Carrera GTS, the Bentley Continental GT V8 S, the BMW M6 and, for rather less, the Nissan GT-R and the Chevrolet Corvette. Don’t laugh. The last model was excellent and the new one is even better.

And now, to make the decision even harder, there’s the car you see in the photographs, the AMG GT S. Which is not billed as a Mercedes because this has nothing to do with the diesel E-class in which you came home last night. Can we be clear on that? Good. So let’s move on.

The SLS AMG was a stupid car for stupid show-offs, which probably explains why I liked it so much

In the beginning was the SLS AMG, a silly-money quasi-supercar that I completely loved. It was fast only in theory because in practice it simply spun its rear wheels and went sideways. Really, it should have had wipers on the side windows.

What it had instead were gullwing doors, and I’ll let you into a little secret. No one has ever watched anyone climbing from a car with up-and-over doors and thought, “Crikey. I bet that bloke is intelligent and blessed with a gigantic penis.” Things that have never been said to someone climbing from under a gullwing door include, “Thank you for coming, Your Holiness.”

The SLS AMG, then, was a stupid car for stupid show-offs, which probably explains why I liked it so much. I certainly liked the noise. You may remember it was used as the Formula One safety car, and even when the racers didn’t sound like vacuum cleaners, you could still hear it — a thundering baritone to the wailing treble.

Anyway, the new car sits on the same basic chassis as the SLS but costs, for reasons that are not entirely clear, almost £50,000 less. Sure, you don’t get gullwing doors — which is a good thing — and you don’t get the old 6.2-litre V8. But that’s not the end of the world either, because what you do get is a wondrous 4-litre dry-sump V8 twin turbo.

It’s clever too. The turbos sit in the middle of the V, which makes the engine incredibly small. And that means it can be located low down and behind the front axle, for a lower centre of gravity and better weight distribution.

There’s more racy stuff, too, because the seven-speed insta-shift flappy-paddle gearbox sits at the back of the car, being fed by a carbon-fibre prop shaft.

The GT S weighs just over 1½ tons, which is light for a car of this size, and it feels it — it’s almost unnerving. Because from behind the wheel it feels as if you are sitting at the back of a supertanker. The bonnet is so vast that if it arrives on time, you will be 20 minutes late. It’s not just long either. It’s so wide that someone could land a medium-sized helicopter on it and you wouldn’t even notice.

It’s odd, then. Because here is a car with many track-oriented features and many buttons that will turn it from a cruiser into a Nürburgring barnstormer. And yet it has a bonnet that’s seven miles longer than necessary. 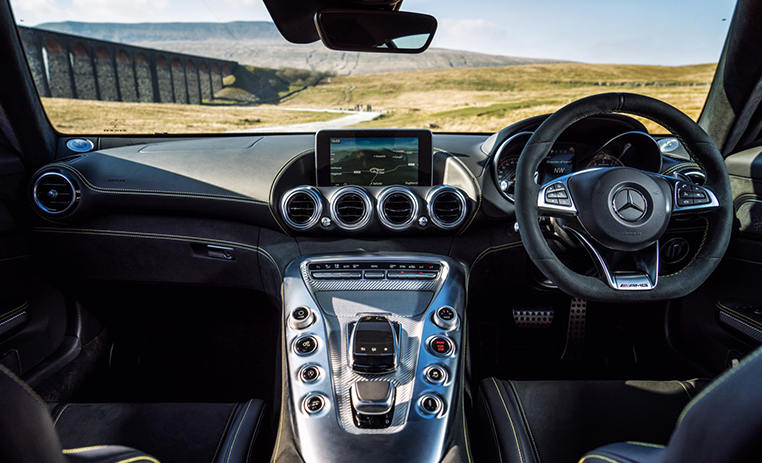 I think I know why. Behind all the racing paraphernalia and the Mercedes suede and silicone, this is a modern-day muscle car. It’s Merc’s Mustang. You sense this when you drive it. The GT S feels as though there’s very little rubber in the bushes and only the smallest amount of insulation between you and the oily bits. It feels raw. Much more raw than any other Mercedes and any of the other cars that you can buy for this sort of money. It feels — how can I put this? — extremely exciting.

It looks extremely exciting as well. I’m not going to say it’s pretty because it isn’t. The windscreen is wilfully upright and the back just sort of tapers away to a sea of nothingness. But, ooh, it has presence. You get one of these in your rear-view mirror and you will get out of the way.

This isn’t a silly car at all. Of all the vehicles in this bit of the market, it’d almost certainly be my choice

On a day-to-day basis, it’s swings and roundabouts. The hatchback at the rear is good and the boot’s big. But the width means it won’t fit in a standard London parking bay. And you should definitely avoid the optional carbon-ceramic brakes, which work like a switch. One minute you’re going along and the next you have a broken nose.

Inside? It’s close to faultless, really. Maybe the gearlever is too far back and maybe the sat nav screen looks a bit of an afterthought, but it has everything you could want and a few things you don’t. Why, for instance, would you want to make the exhausts louder?

In a silly car for silly show-offs, that sort of thing would work well. But this isn’t a silly car at all. Of all the vehicles in this bit of the market, it’d almost certainly be my choice.

Because, as I said at the start, I don’t use Uber. So Mercs are still all right in my book. And this isn’t a Mercedes anyway.

Browse the used Mercedes cars for sale on driving.co.uk