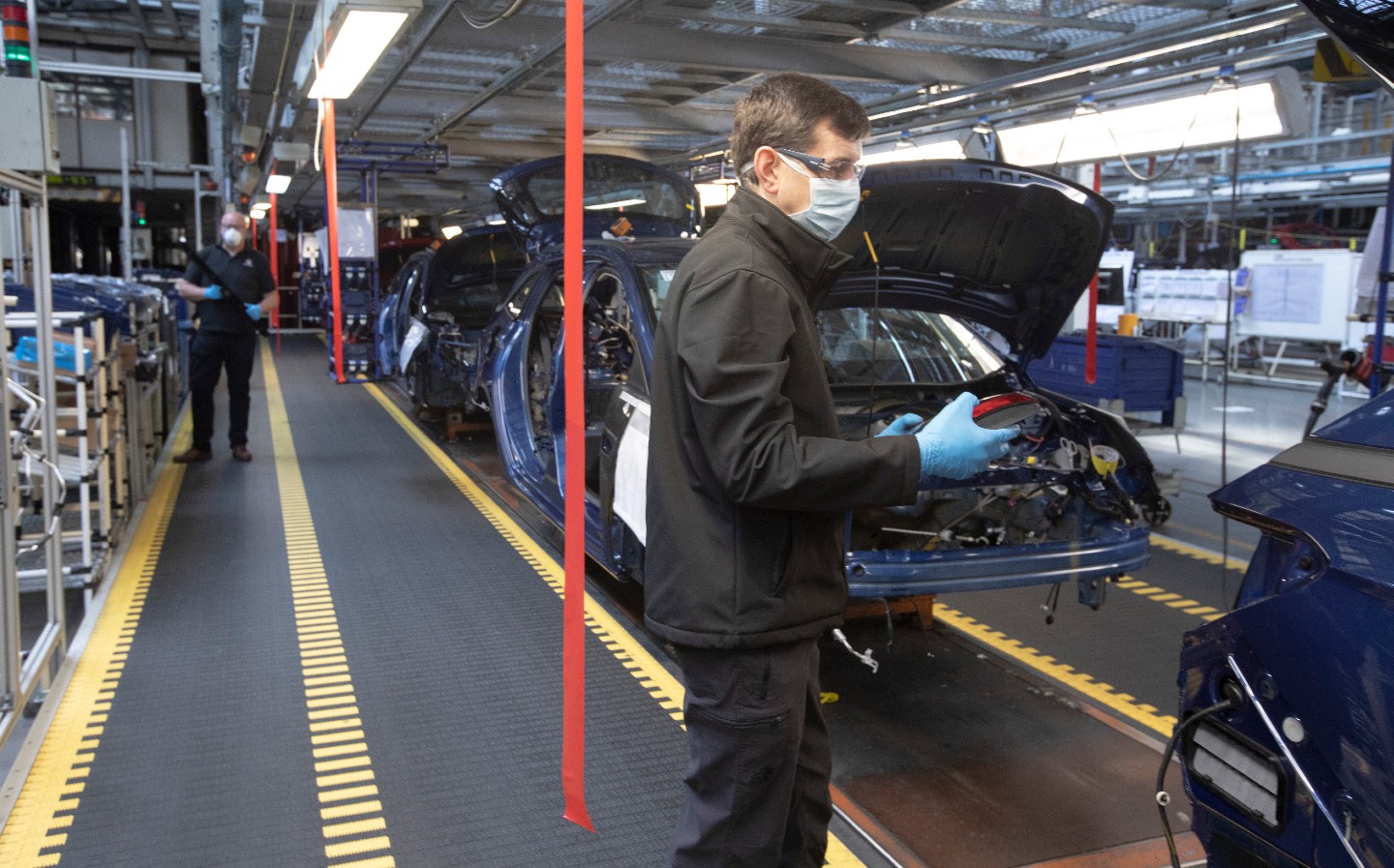 THIS YEAR has been a troubled one for the UK car market in more ways than one, but a single issue surpassed plummeting demand for diesel and uncertainty over Brexit to wreak havoc on an unprecedented scale: the Covid-19 coronavirus.

Even the pandemic couldn’t hold back some major vehicle introductions in 2020. Model launches have ranged from the exotic, such as the Ferrari Roma and McLaren Elva, through to volume offerings including the eighth-generation VW Golf and the all-new Ford Puma. There’s even (finally) a new, not-so-utilitarian Land Rover Defender.

And car companies have also been busy launching all-new electric models. These have included the Porsche Taycan and Mercedes-Benz EQC SUV, as well as the Mini Electric and the Honda e city cars.

Between these petrol, diesel and electric vehicles, there has been a new model to fit almost any budget or lifestyle.

However, while at the end of 2019 the promise of these new vehicle launches appeared to herald a bumper year for the country’s new vehicle market, all of that was put on the back burner with the rapid spread of the coronavirus around the world.

Car sales hit by the pandemic

By March, hospital admissions and deaths related to the disease made for grim reading. To stem the spread of the virus the first national lockdown was put in place.

With the mandatory closure of every outlet other than essential retail, the car market went into a precipitous decline. In April, the Society of Motor Manufacturers and Traders (SMMT) reported year-on-year new vehicle sales had dropped by a whopping 97.3%.

Coming out of that first lockdown, new car sales for the year were tracking 48.5% lower than the same period in 2019. This equated to 240,000 fewer private deals and an estimated net VAT loss of £1.1bn. In June alone new car registrations fell by 34.9%.

By late October, new car sales had made a strong recovery. But this was dealing from a very low base and the 1.38m units sold across the country still represented a year-on-year decline of 31%.

In early November the country was plunged into a second national lockdown to help curb the spread of the virus. But while this resulted in the sale of petrol and diesel models taking another nosedive (39.9% and 59.8% respectively for the month), battery electric (BEV), hybrid (HEV), mild hybrid (MEV) and plug-in hybrid (PHEV) models were up 73.3%.

Our view of cars has changed since Covid-19

Clearly, the coronavirus lockdowns have resulted in fundamental changes to the way we live and work. But while many people still have no choice but to travel to their workplace, many others have been logging on from home for most of the year.

With no commute, there has been a significant drop in total miles driven. With the total range of EVs curving upwards and the declining curve of miles driven, the two arcs have ended up meeting in a customer-friendly sweet spot.

In addition to this change in our working lives, the pandemic has served to polarise the view on our national health, including the quality of our air. While there are environmental concerns related to the production of electric vehicles, particularly the batteries, there’s no other choice which will have such a direct impact on reducing local, transport-related pollution output.

With no commute, there has been a significant drop in total miles driven

This also works on a collective level; the Ultra Low Emissions Zone in London, where older petrol and diesel models face an additional charge for driving into the city centre, has resulted in a 36% drop in nitrogen dioxide (NO2) measurements. It’s worth noting that most electrified vehicles are exempt from the ULEZ charge, while full EVs and PHEVs currently fall outside both the ULEZ and the congestion zone charges.

Car dealers adapt for the 2020 downturn

We’ve all been affected by the coronavirus lockdowns brought in across the country this year but while we’re looking at the UK car market, spare a thought for car dealers. Whether you love them or loathe them, dealers are an intrinsic part of the automotive landscape and few other businesses have been hit quite so hard by the pandemic.

Mike Hawes, chief executive of the SMMT had this to say: “With £1.3bn worth of new car revenue lost in November [2020] alone, the importance of showroom trading to the UK economy is evident and we must ensure they remain open in any future Covid restrictions.”

Like almost all other retail outlets, dealerships were closed during the first national lockdown. With no buyers permitted to enter showrooms, there was confusion even surrounding whether the dealers were permitted to fulfil click-and-collect purchases made online, with the vehicle handover being the major point of contention.

Speaking with Driving.co.uk, John Kirwan, editor of MotorTrader magazine, said: “Dealers were hit hard in the first lockdown when new car sales went into freefall. But they responded quickly by improving the way they interact with customers, making better use of call centres and digital tools to keep in touch with customers.

“PSA Retail, for example, overhauled its call centre and increased staffing levels to ensure they were keeping in touch with customers.”

Like many other business sectors, more car dealers have adapted by adopting online solutions.

Kirwan added: “The biggest change in the market was the acceleration of digital and a greater customer acceptance to buying new and used cars online. By the time of the second lockdown in England, the fall in sales in November was 27%, much lower than in April, down 97%.

“The majority of dealers had enrolled on click and collect, were accustomed to the new social distancing in place and were also offering more transactions online.”

With the introduction of new, more stringent Tier 4 lockdowns across much of south-east England, dealer showrooms are again closed. But with improved vehicle details available online, buyers can still choose their new car or van online and make payment before completing the transaction via click and collect. The same holds true in Wales under the country’s latest lockdown. In Northern Ireland all sales will cease, as even picking up a vehicle will not be allowed.

Dealers mark the point at which a vehicle is handed over to consumers. At the other end of that line is the assembly plant, where the cars that end up in the showroom are welded, glued and otherwise put together.

The Covid-19 pandemic has had an equally disastrous effect on car factory operations. By June, year-on-year finished vehicle output across the UK had dropped by 48% in response to falling demand. Over the first six months of 2020, UK-based car manufacturers produced just 56,000 units, the lowest output since 1954, as factories were forced to close.

Production did ramp up over the summer in response to the opening of the national market but according to the SMMT, nine out of ten of vehicles assembled in the UK were produced for export markets, most of which had reopened earlier than the UK.

A case in point was Honda. Like all other car makers, the Japanese company saw a significant drop in UK sales over the first lockdown, although by mid-summer sales had rebounded to where they were 1,000 cars ahead of revised sales forecasts.

In addition to declining sales, the coronavirus pandemic has had a direct impact on workers at the plant. According to a Honda spokesperson, the company implemented “a significant number of safety measures to mitigate risks and provide a Covid-secure site”.

While specific numbers were not available, the Honda official stated that the company had “utilised the government furlough scheme during the first phase of lockdown” as production was scaled back.

The automotive industry in the UK directly and indirectly (across the part supplier network) supports an estimated 820,000 jobs. By June, more than 6,000 redundancies had already been announced. With total output over 2020 expected to fall around 32% to about 880,000 units, the SMMT estimates that the sector could lose a further one in six workers due to the combined effects of Covid and Brexit.

Better times ahead for the UK car industry

Although Covid-19 has wreaked havoc this year across the UK automotive industry, there appears to be some light at the end of the tunnel. As vaccines start to be rolled out across the country, it can be hoped that both factories and dealerships can get back to the business of making and selling cars.

As SMMT boss Mike Hawes noted: “With a vaccine now approved, the business and consumer confidence on which this sector depends can only improve, giving the industry more optimism for the turn of the year.”

There are a series of noteworthy models due out in the coming year. Looking at hatchbacks, the all-new Citroën C4 will launch in January 2021, followed later in the year by the next Skoda Fabia. A new version of the Vauxhall Mokka crossover is also expected in early 2021, while a replacement for the popular Nissan Qashqai, featuring styling cues from the recently-revised Juke, can be expected in the summer.

There will also be a raft of new electric models, including the Audi Q4 E-tron and BMW i4. In addition, Ford will introduce the Mustang Mach-E, while Seat is expected to launch its El-Born, based on the Volkswagen ID.3.

There’s even hope that a new motor show, IAA Cars, will be held in Munich towards the end of 2021. After the Geneva motor show was cancelled in early 2020, this would be the first major European car expo since the Frankfurt IAA in 2019. There were reports that Geneva itself would attempt a comeback, for press only, but the new strain of Covid-19 may have blown that idea out of the water.

While there are other political and economic factors which could still cause upheaval across the UK vehicle market, the hope is that, with the rollout of a vaccine, at least the effects of the pandemic will, at some point in the near future, be consigned to the history books and we can get back to trying the new offerings from car makers under more normal conditions.