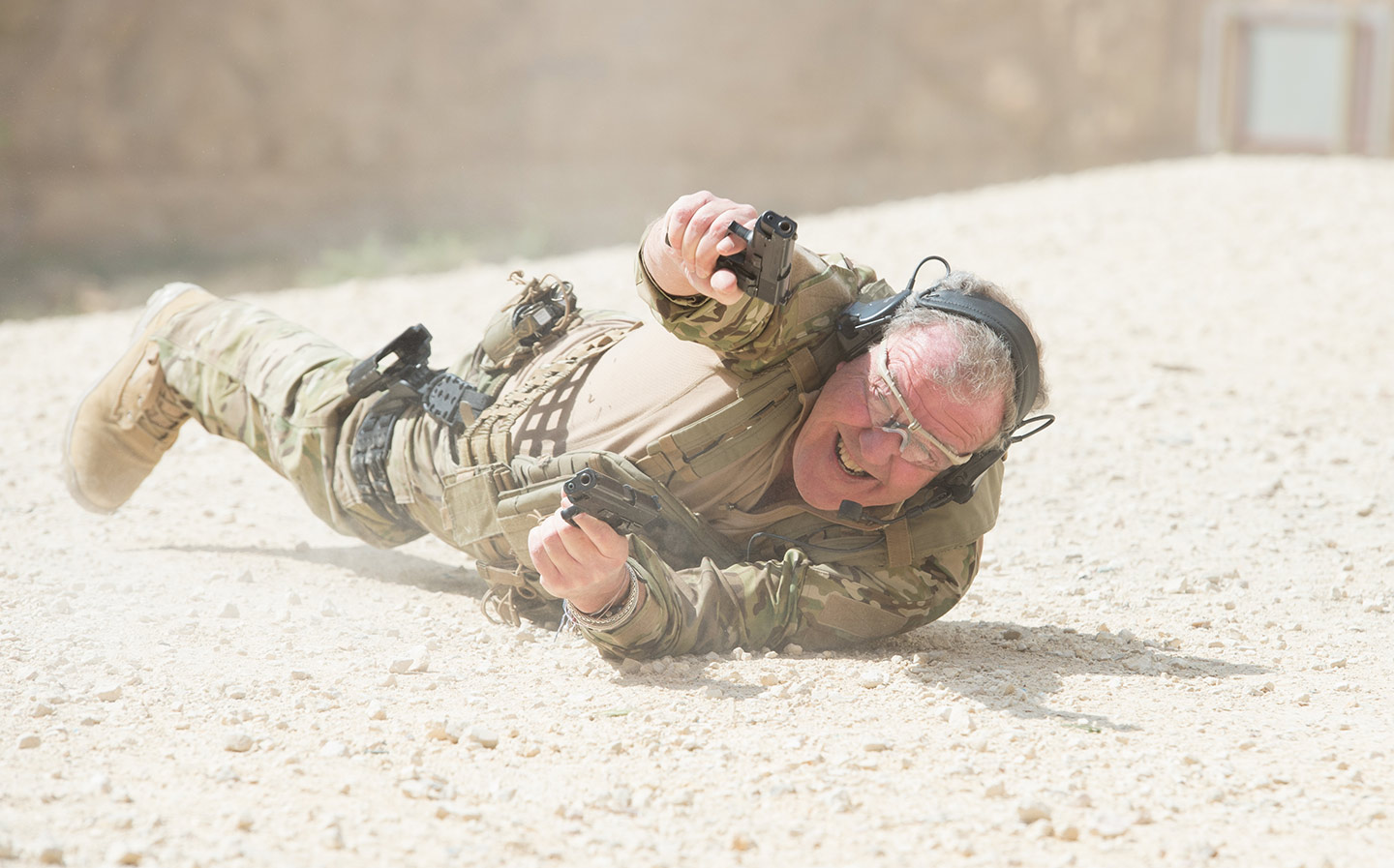 WHEN IT became obvious that Richard Hammond, James May and I were going to carry on making a car show, I knew only one thing for sure. It would not be based in a hangar, on a former RAF airfield, in the British countryside.

Twelve years earlier, the producer Andy Wilman and I had been to the BBC and sold them the idea of hosting just such a car show from just such an airfield. They liked the plan and the two of us were charged with the task of finding one. And frankly, we’d have had more options in 1940.

Time and again, we’d identify a site only to be told that the RAF still needed it for, er, glider training, or its annual brass band parade practice, or parachute storage.
And when we did find somewhere the RAF didn’t want any more, we became entangled in disputes about newts, bats, grasshoppers, ancient thoroughfares, rare stones and unusual grasses.

And then with the neighbours about noise. We’d tell them it’d just be Terry Wogan, once a week, in a reasonably priced saloon but they were having none of it and soon there’d be an action committee and housewives chaining themselves to railings.

Dunsfold in Surrey, the location we eventually found, was a one-off. There was no point looking for something similar for our new Amazon show because such a thing doesn’t exist. We considered northern France, which is near, and South Africa, because they don’t care about newts down there. Or health and safety. Or any of the other irritants that plague our lives in Britain.

But then the lawyers pointed out that we couldn’t host the show from a static location because, although it had been our idea, the BBC owned it. It was all a bit of a problem.
The eureka moment came when I was watching an episode of True Detective. In it, there was a scene where a Baptist minister, displaced by a fire at his church, had set up shop in a tent in a field. 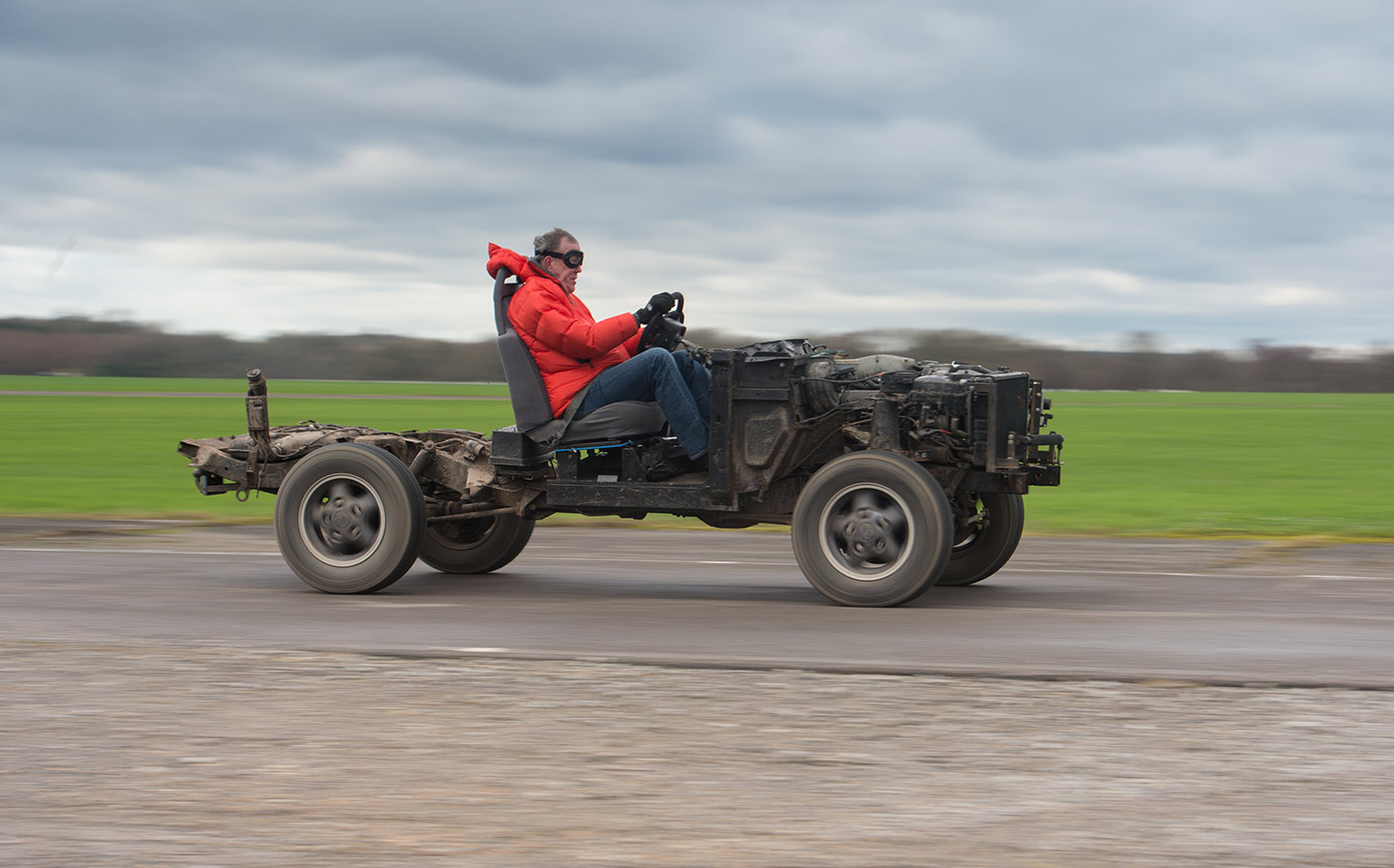 NAKED FRAME Clarkson at the wheel of “the Excellent”, a tractor-derived SUV

“Yes,” I exclaimed to my colleagues the next day. “We shall host our new show from a tent that will be in a different part of the world every week.”

Richard Hammond, who likes being damp and cold in Buttermere, was very excited at the prospect. And James May was excited too, but only because someone had just bought him a new penknife.

So we agreed. We’d be rootless, peripatetic, like music teachers in the Seventies. Or gypsies. Maybe after the show each week we could sell pegs.

It sounds simple. But it isn’t. First of all, the tent would have to be big enough to house a stage, a lighting rig, a crane, five cameras, a car, a tech gallery, a 4K data logging server — which is bigger than the USS Enterprise and more complicated — and an audience of at least 250 people. Any fewer and we’d have the same atmosphere you get at a village cricket match.

This meant the tent would have to be huge. A Las Vegas circus marquee, only bigger. And do you have any idea how much it would cost to fly such a thing from location to location? Especially if we folded it away when it was wet and therefore heavier than a mountain?

It turned out we couldn’t fold it away when it was wet because the fabric would rot. And then we discovered that we couldn’t break it down in one place, load it on a plane and have it built somewhere else in a week. So we’d need two tents, which would leapfrog one another from location to location. And then the director pointed out that we’d need a solid floor for his cameras to rove around on, on their little wheels. And that would mean two solid floors, each of which would weigh more than Asia.

Our budget — contrary to what you may have read in various hysterical reports — was not much bigger than it had been at the BBC. Yet the cost of our tents meant we’d have only enough left in the kitty each week for two pints of petrol and a box of James May’s beef Hula Hoops. 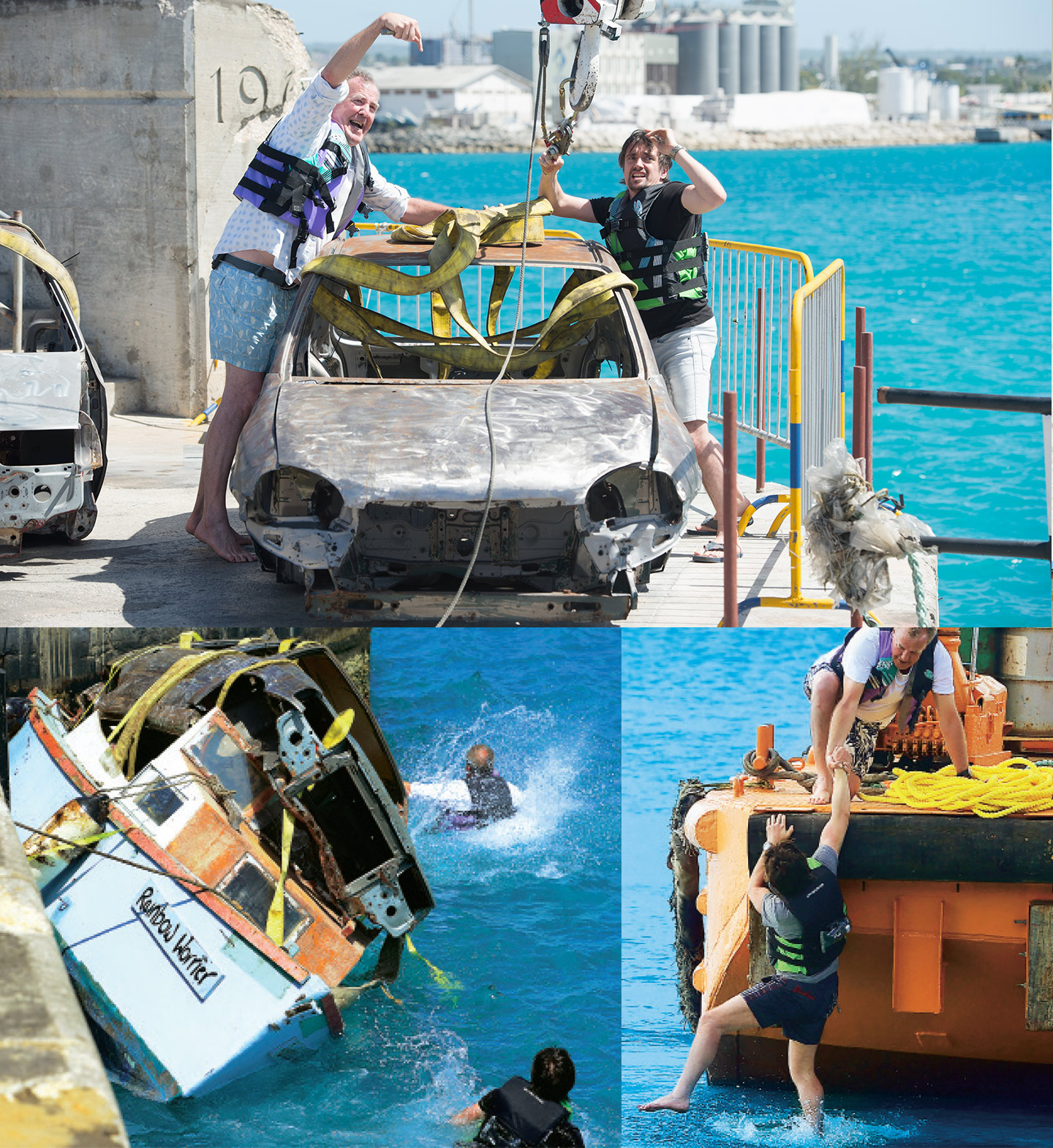 Happily, a magnificent company called DHL then rode into the equation, offering to meet our transport costs in something called a “sponsorship deal”. Finally, The Grand Tour was ready to roll.

Choosing the first location was easy. The three of us, in our former lives, had toured the world with a live show and learnt one thing: South Africa offers by far and away the best audiences in the world. Crack a gag at a Friday night event in London and you get a chuckle. Crack the same gag in Norway and you get a taste of what it might be like to be in space. But crack it in South Africa and they laugh for about a year.

So we found a field in a place called the Cradle of Humankind — because it’s, er, the cradle of humankind — and up went Tent One.

Except it didn’t, because South African customs had decided to impound just one of our containers: the one containing the tent’s feet. That was a bit like the time Vietnamese customs officials confiscated one of our walkie-talkies. It renders the whole operation pointless. However, as is the way when you are far away, it’s always easy, in a quiet corner with the senior man, to find a resolution.

I’m going to be honest with you: as the filming day dawned, we were all nervous. No show of this kind had ever been recorded in 4K. A Dutch company had built a multi-camera server and was fairly sure it’d work. But would it? In a field? In Africa? 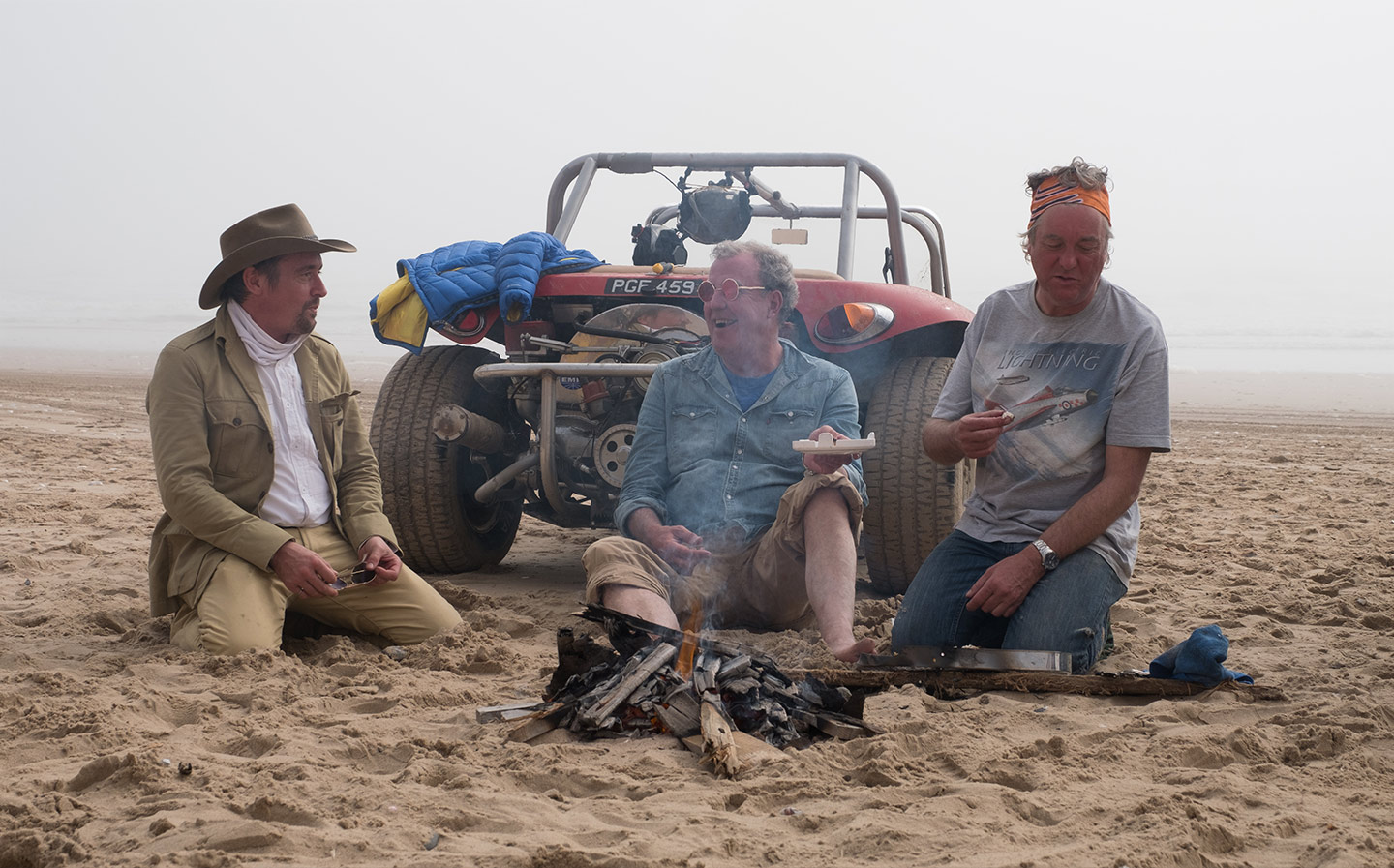 SANDWICHES IN THE SAND Hammond, Clarkson and May settle down for a snack in the Namib desert

And how would the audience react to all the new features? The Star in a Reasonably Priced Car, the Cool Wall, the Stig — all that had been left behind at Dunsfold and replaced with other stuff. Would that be like the Rolling Stones suddenly appearing on stage in tweed suits and doing Abba songs because of some uninteresting intellectual property issues?

And then there were the films we’d made. The newspapers had got it into their heads that, because we had £400m an episode, we’d be reporting each week from a different planet. “Oh look, James has been crushed by the atmospheric pressure on Jupiter. Haha. And Hammond is on Mercury … on fire. Hahahahahaha.”

Would everyone be disappointed to find the films had all been shot on Earth? And that they were still full of three middle-aged men falling over? With the occasional car sticking its nose into the frame?

Our biggest worry, however, was the make-up girl. The job had plainly gone to the lowest bidder, who turned up with a bag full of Artex and some trowels. Hammond was first in the chair and after half an hour emerged looking like he’d just arrived from Easter Island. It simply wasn’t him any more. 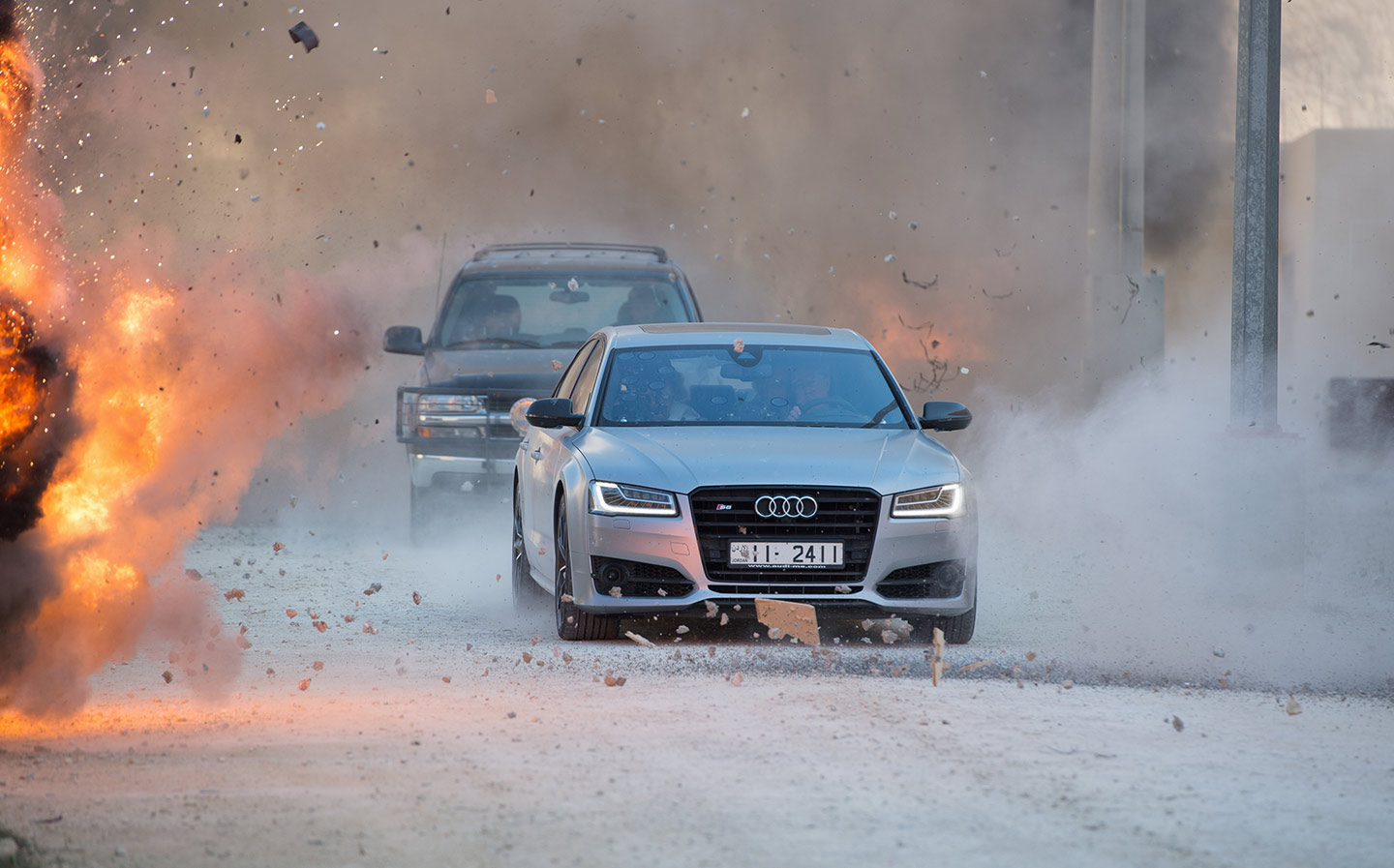 She’d heard that 4K was extremely high-definition television that shows up every wrinkle and spot, and had decided that the best solution to the problem was to encase our faces in a plastered box. Speech was impossible because we couldn’t move our mouths. James had breathing difficulties. I couldn’t get my head off the floor because it weighed so much.

Some chisels were found and soon we began to emerge from our tombs, like skeletons unearthed at an archaeological dig. Would anyone notice when we appeared on the screen? It was another thing to worry about.

“That’s really what’s at the core of The Grand Tour: our relentless and unending need to belittle and humiliate one another”

It’s hard to be sure whether our fears were founded because, of course, the audience was South African. Which means they laughed and cheered and clapped every time one of us even looked like we might be on the verge of saying something amusing or interesting.

The acid test will come when we get to Germany. That’s many weeks away, though. Next up, it’s Los Angeles. Then there will be a two-week stint in Britain. And after that we will whizz round Europe for a bit.

It’ll be strange. For 12 years, we got up on a Wednesday and drove to Surrey, where we were surrounded by familiar faces and familiar things. Now we will be somewhere different all the time. In front of a different audience, with different values and different tastes.

The only constant will be James and Richard, whom I hate. But that’s really what’s at the core of The Grand Tour: our relentless and unending need to belittle and humiliate one another.

Yes, we shall be in a different place each week, in a tent, doing new stuff. But when James comes back from the lavatory, having not shaken himself properly, you can be sure Richard and I will bring it up.

So hopefully, whether we are in Scandinavia or the Middle East or the United States of America, it’ll be a case of meet the new boss. Same as the old boss. 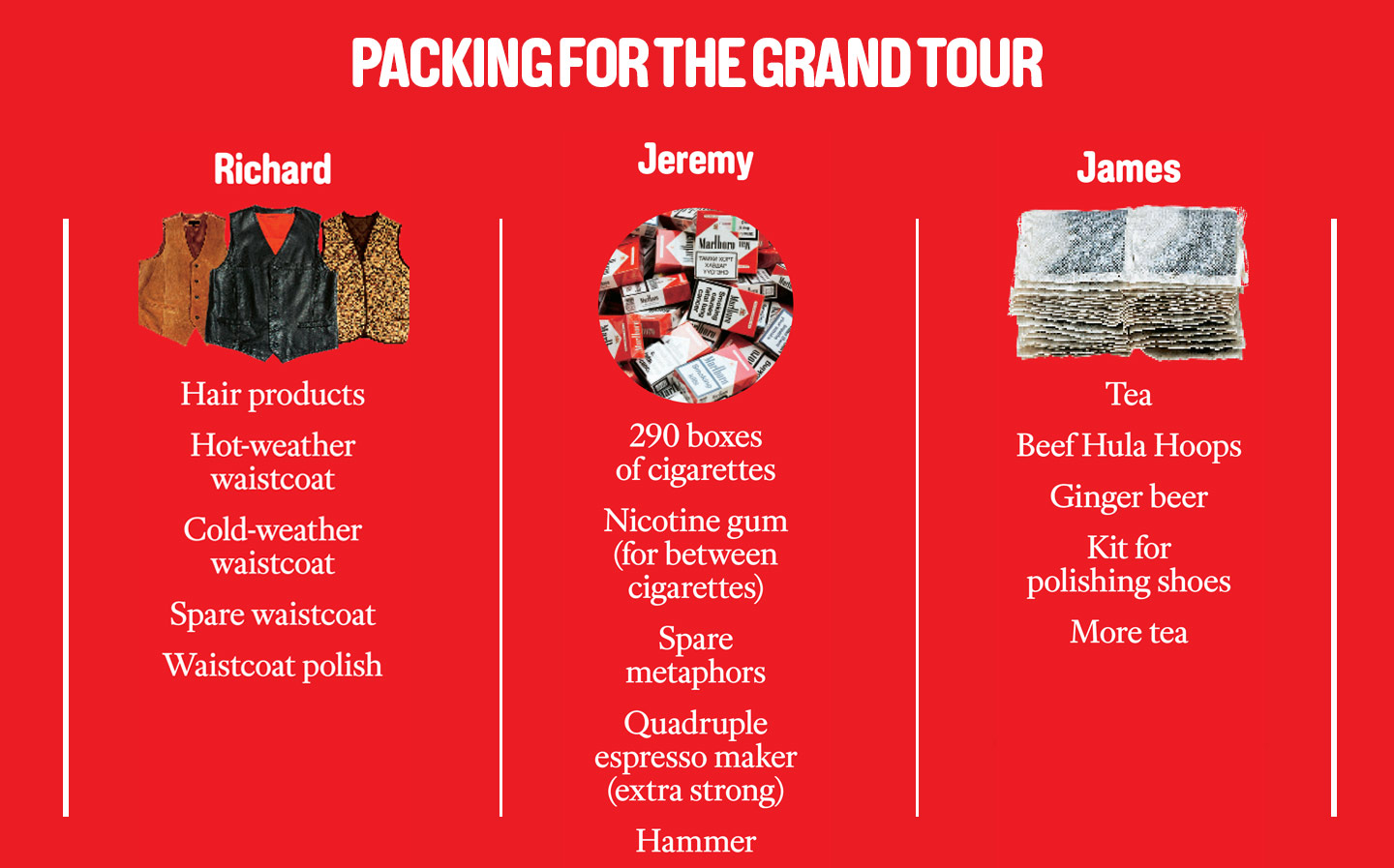