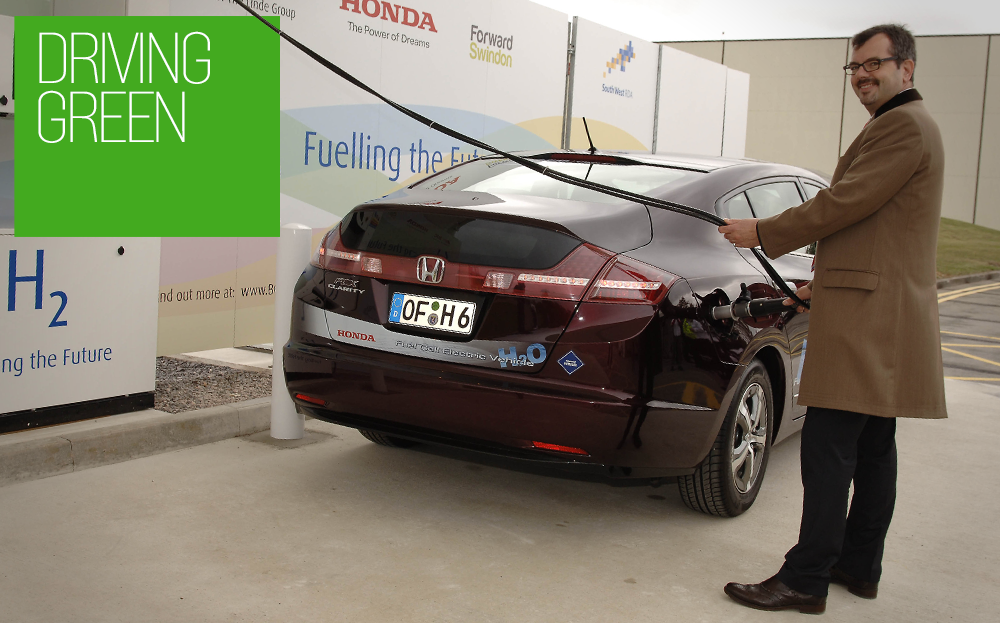 HYDROGEN is the most abundant element in the universe, and when it’s burned in air the only by-product is water vapour. So wouldn’t it be great if hydrogen could be used to power cars? Well, it can. To a point. But of course there are lots of catches.

Firstly, much of that hydrogen is joined at the hip with oxygen in the form of water, which has to be electrolysed to get the hydrogen out. Which means putting in lots of energy to get (potentially less) energy out*. Then the highly flammable gas has to be stored, and perhaps transported in trucks to filling stations (sound familiar?). Suddenly, hydrogen doesn’t appear to be such a wonder fuel after all.

But this hasn’t stopped many car makers working on hydrogen fuel cell vehicles (FCVs) for decades, and it’s around now that we’re starting to see their hard work reach fruition. Hyundai has already put a fuel cell ix35 on sale in the UK while Toyota is about to bring a handful of hydrogen-powered Mirais here for selected customers to try them out. Honda though, has been working on FCX prototypes since 1999, and its latest evolution, the FCX Clarity, has been notching up test miles in the US since 2008.

While Toyota hasn’t released a purchase price for its Mirai, the Hyundai is pitched at £53,105 – and that’s after a £15,000 subsidy from the European HyFive consortium. Bearing in mind the most expensive regular ix35 costs little more than half this, purchase prices are pretty unpalatable at the moment. After all, what do you get for all that money?

In simple terms, you get a car that’s much like an electric vehicle to drive, but it can be refuelled in minutes rather than hours.

Under the skin there’s plenty going on. An FCV is powered by hydrogen which isn’t burned – instead it reacts with oxygen from the atmosphere in a fuel cell to create electricity, which is used to power electric motors to drive a car’s wheels. The only by-product from the tailpipe is water that’s (technically) pure enough to drink.

Aside from the high purchase prices at present, running a fuel cell car isn’t easy because there’s currently virtually nowhere to refuel. There are just three public stations in the UK and eight others in private/corporate hands. Buyers don’t want to spend lots of money on a car they can’t refuel, while car makers don’t want to make products that nobody will buy.

Meanwhile the fuel companies don’t want to build infrastructure that nobody will use, so until there’s a level of critical mass in terms of infrastructure, fuel cells are likely to remain a very rare sight on British roads.

* This energy could come from renewable sources, of course, which would make it a very clean fuel but it begs the question: why not use that electricity to charge up a battery?