FRANK Stephenson’s back catalogue reads like a greatest hits of car design: the relaunched Mini and Fiat 500, the Ferrari F430, Maserati MC12 (race and road versions) and a number of McLarens that breathed some much-needed soul into the Woking-built supercars. Perhaps the ultimate example of his time at the company is the McLaren P1 hypercar, an outrageous 217mph carbon-fibre hypercar with active aerodynamics and a hybrid powertrain.

But since leaving McLaren in 2017, Stephenson has turned his hand to a number of other product designs, and his latest is a range of three child seats, from newborn baby to booster, that he claims will be the safest in the world when they launch in early 2021.

“The proposal was to design a baby car seat where we can really improve the market in terms of safety,” he told Driving.co.uk via video interview. “Through a lot of testing … they’ve raised the level of safety in different impact tests. You can get front impact, rear impact, side impacts, but they’re about just over 60% safer than the safest car seat on the market.”

Stephenson decided to get involved after Mobius, an Israeli company that typically manufacturers energy absorption systems for armoured vehicles, contacted him to say they’d like to apply their technology to the civilian world and had the idea to use it in baby seats, under the brand name BabyArk.

“The baby car seat market, especially in the US, hasn’t moved on since the 1970s,” Stephenson explained. “If you met certification for a baby seat in the ‘70s, it still complies today. There are very few products in the world that have not moved on since 1970. In Europe, it’s been since the year 2000, which is still 20 years ago.

“So there’s a market for protecting your most valuable treasure that hasn’t really developed, and it’s still ‘good is good enough’. My gosh, is there room for improvement there. Especially with all the new materials that have come along all the new technologies.

“It’s time that it moves on, and to kick the industry’s butt a little bit and spur them on to do something [about it].” 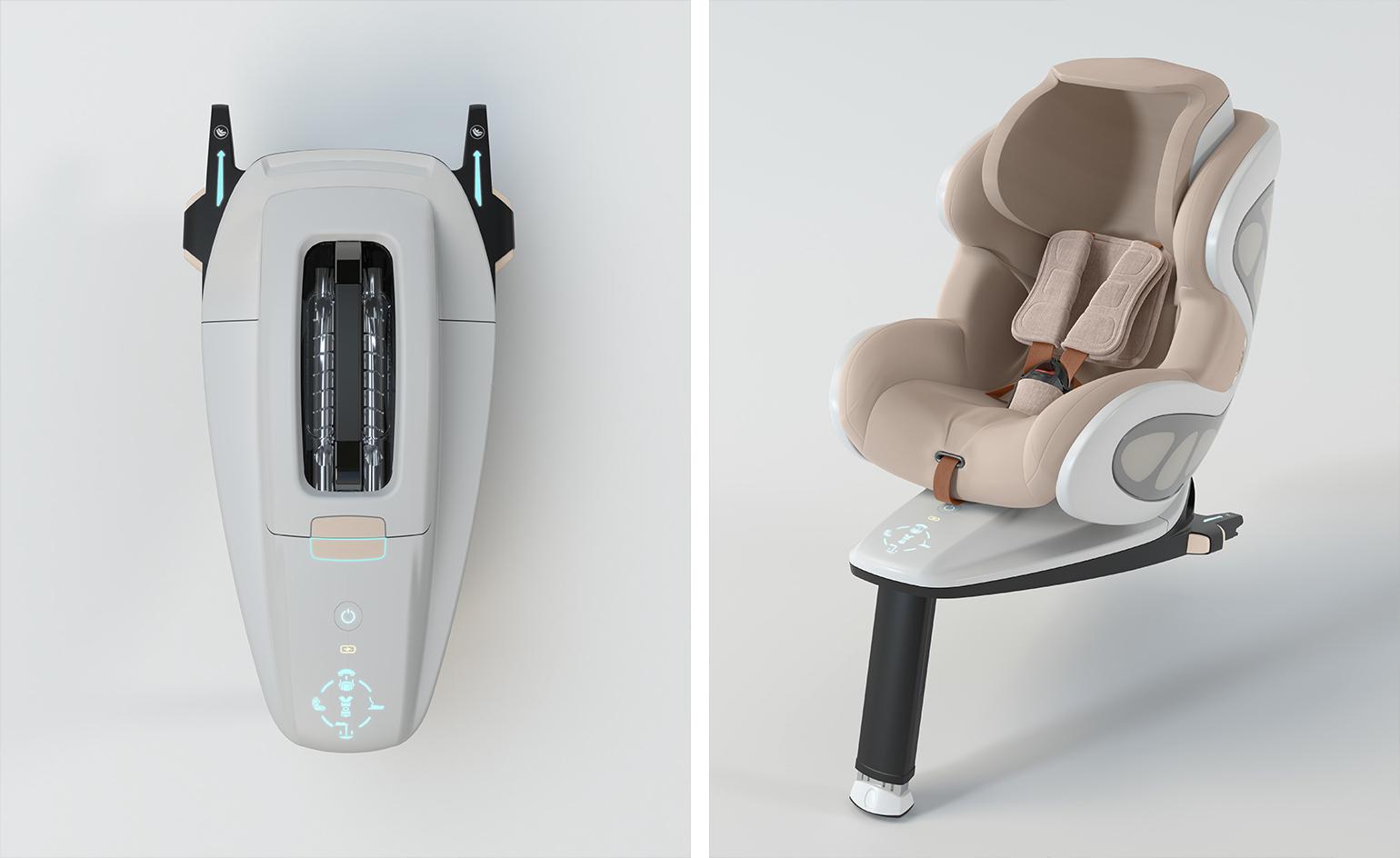 The new energy absorption technology is a small device that fits underneath the child, he said. Combined with materials developed in the supercar and motor sport worlds (which in turn borrow heavily from aerospace), such as carbon fibre, along with new smart tech and shock-absorbing design that takes inspiration from spirals and woodpecker heads, brings a step change in safety, according to Stephenson.

“Over 60% improvement is huge in any industry of any product. To be able to apply that safety increment to baby car seats is a wonderful beneficial opportunity, and I couldn’t wait to get started. This is not just another seat. This is a life saving device.”

Other safety innovations on the BabyArk range include a fob that reminds parents their baby is in the back of their car, in case they walk away without removing the child. Forgotten Baby Syndrome is a statistically small but very real issue, sometimes with tragic consequences: more than 900 children have died in hot cars in America over the last 30 years, according to USA Today.

While such tragedies are almost unheard of in the UK, as we experience fewer extremes in heat and cold — the Royal Society for the Prevention of Accidents was unable to recall any cases when approached by Driving.co.uk — but on hot days parents and guardians should be vigilant. When it’s 22°C outside, it can reach 47°C inside a car within the hour.

Many car makers are now building sensors into their vehicles that sound alerts if a child is detected in the rear, though the BabyArk seats’ fobs are innovative solutions that solve the problem for those without such high-tech cars.

Stephenson says the whole life cycle of a child seat has been rethought when creating BabyArk. Apparently taking a leaf out of Tesla’s book, the company has decided will sell directly to the consumer rather than via a third party retailer. This helps cut costs and allows price control for what clearly won’t be the cheapest of child seats, but to make them more accessible to the less wealthy they will also be made available to lease with affordable monthly payments, similar to the Personal Contract Purchase (PCP) finance deals available for cars. At the end of the lease period, customers can either give back the seat or keep it, to use for future children, pass on to other family members or even resell.

This has not really been possible in the past as the market for secondhand child seats is tiny; parents are rightly concerned that a used product may have been damaged by the previous owner, and the structure thereby compromised. BabyArk will offer a checking and reconditioning service to make sure used seats are up to spec, stripping the products just as a Formula One team would strip and check a car after each race.

“If a car seat has been compromised in an accident, we’ll be able to know that,” said Stephenson, who counts sustainability as one of the four main pillars of his design ethos. “But what BabyArk will be doing is taking the seat back and refurbishing it. You can tell if the carbon frame, for example, has been damaged or is not usable. So they can keep going, and going and going. It’s a brand new seat basically, when you change out a lot of components.”

Stephenson also highlighted a potential issue with child seats: poor installation in cars. According to Maxi-Cosi, another child seat maker, up to eight in ten inexperienced parents install their car seat incorrectly when using a seat belt, though this drops massively to 6% when Isofix fittings are used. With the BabyArk, a step-by-step light system has been developed to ensure correct installation every time, no matter who does it.

“Grandparents end up taking care of the children over the weekends and they’ll have installed the baby seat,” said Stephenson. “They can get confused because they don’t know what the next step is — they’re not sure if it’s installed correctly. It’s a mess basically, and they’re driving around very insecure in the fact that maybe it’s not put in properly. It happens a lot.”

While coloured indicators — usually green and red — to show correct installation are not new to child seats, Stephenson says the BabyArk cannot be fitted unless you see green lights at each stage of the process. “If it’s red, you haven’t done it and you can’t go to the next step. When all the lights light up green, you’re fine. So there’s a visual confirmation that is dumb proof, you know — stupid proof. People cannot make a mistake; it’s so simple. There’s no way of mis-installation.” 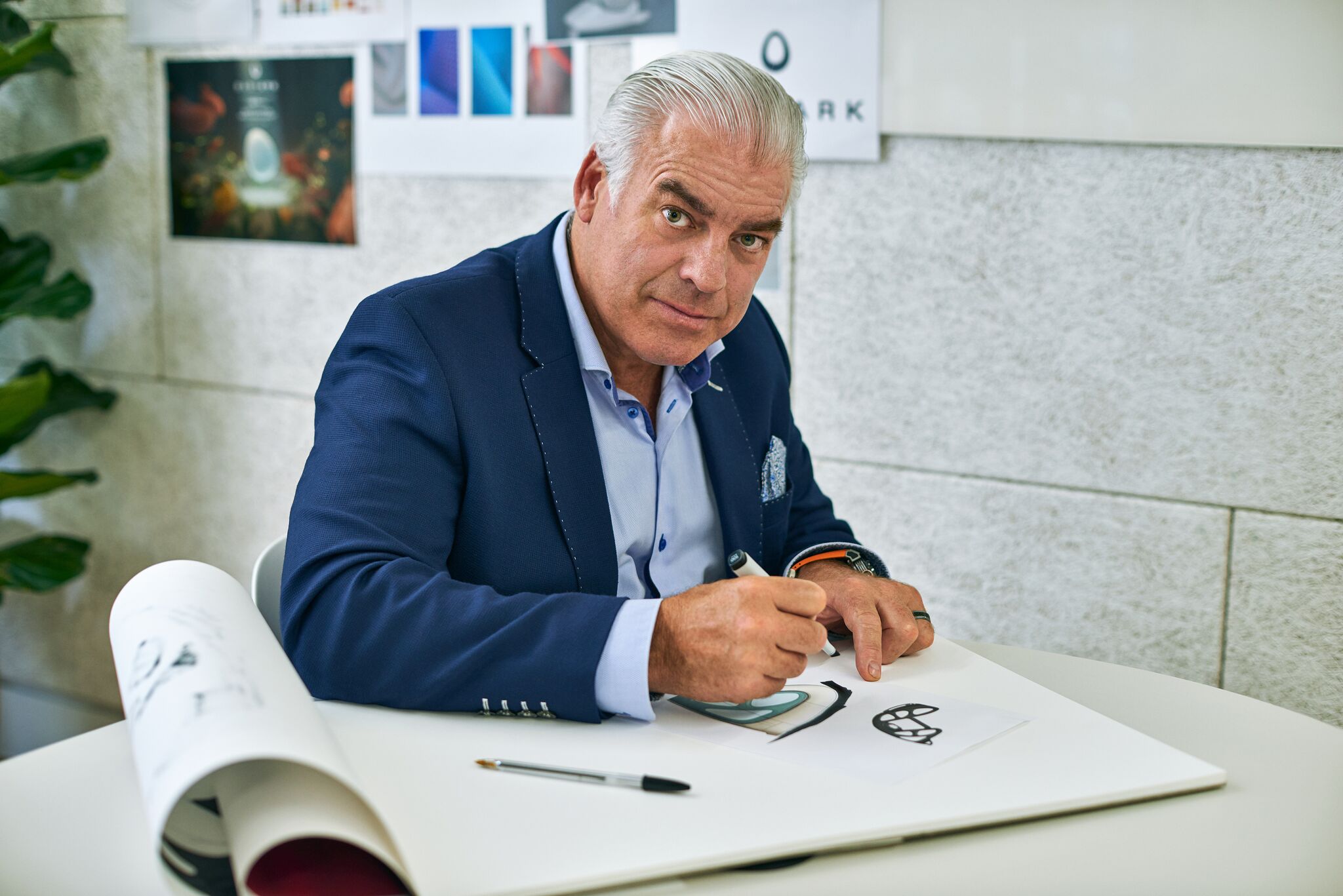 The use of high tech materials and construction techniques makes the seats ultra-light as well as ultra-strong, says Stephenson, which makes them much easier to carry. “People equate lightness oftentimes with not being very durable, because lightweight equates to that sometimes, but it’s actually to the contrary — the seat is very, very strong, construction wise, and very, very light.

“Colin Chapman [Lotus founder] designed for lightness and high performance cars are always as light as we can get them. Weight is the enemy in design, typically.”

Of course, best-in-segment performance is essential but for Stephenson, it also has to look good. The main focus was to create something that looks friendly but also shows off some of the technology.

“You don’t want your baby sitting in a machine — you want it to sit in something that’s warm, inviting, comfortable, cosy, friendly-looking. But when you do supercars you show the heart and soul of the car — the engine — through a polycarbonate cover over the top the engine. You see it and that’s a symbol of pride. You’ve got this soul-stirring machine, and that’s the heart right there and look how gorgeous it is. Petrolheads love that.

“To apply that to a seat, you don’t want to disguise the technology — you want to show it off. There’s been a lot of work that’s gone into making it look friendly at the same time, but also showing why the seat is so different. It shows the spirals in a very beautiful way. It shows the carbon fibre frame of the seat through a tinted polycarbonate cover. You can see why the seat is different, why it’s safer, why it looks so unusual. But you can you can only just make out the weave of the carbon fibre, so it’s not an in-your-face kind of approach.”

Stephenson says the newborn baby seat, called G-zero and suitable for chidlren up to 15 months old, also comes with an “innovative handle” that makes it easy to get in and out of a car. It will be joined by the G-one, which is suitable for children up to six years old, and a booster seat for children up to the time they are no longer legally required to use one (12 years or 135cm tall, whichever comes first).

All the products have the same design values, say Stephenson, and are covered in new types of fabrics borrowed from car interior design, including sustainable types of bio-leathers.

“A lot of industries are discovering that cross-industry resources can start to turn designs around in a in a non-typical way,” Stephenson said. “If you’re used to going into your usual resources to design something, you’re typically going to get the same results back, or very similar results. But if you go out of the industry and look for creative people who’ve done other things, their view can be really distinctive and beneficial to changing the status quo.”