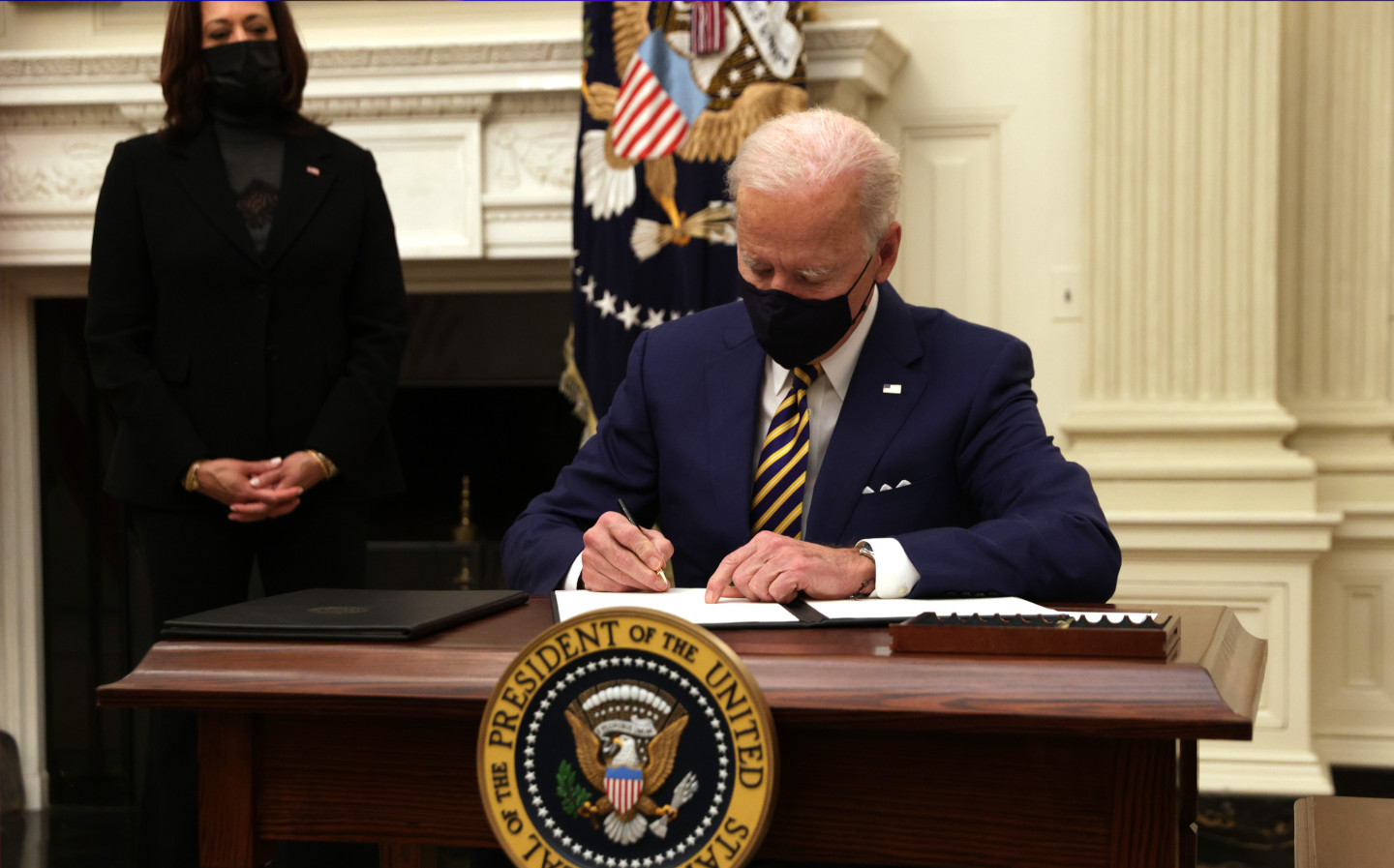 SHARE PRICES in Tesla and other American electric vehicle companies are expected to rocket under the green presidency of Joe Biden.

The new president has put his environmental policies at the forefront in his first days in office, recommitting the U.S. to the Paris Climate Agreement (abandoned by the Trump administration in June 2017) within hours of his inauguration on Thursday..

In their first call since the inauguration, the new President and Prime Minister Boris Johnson talked on on Saturday night about co-operating on a green recovery from the ongoing coronavirus pandemic.

Great to speak to President @JoeBiden this evening. I look forward to deepening the longstanding alliance between our two countries as we drive a green and sustainable recovery from COVID-19. pic.twitter.com/Y4P3G74PPz

The response to climate change planned by Biden has been labelled the most dramatic in history — it includes a $2 trillion (£1.46 trillion) transition to clean energy, as well as an ambition for the U.S. to be a carbon neutral nation by 2050 —— the same year the UK plans to achieve the milestone.

Biden has also talked about using the transition to a green economy as an opportunity to create “millions of good-paying jobs”. These policies affect no industry more than they do American Auto, a sector Biden was vocal about throughout his election campaign.

Biden has pledged to create a further million jobs in America’s car industry by promoting research and development into electric vehicles. He has also said he will invest $400bn (£306bn) in clean energy, including pure-electric vehicles and expanding the public charging infrastructure from fewer than 90,000 charging points today to 500,000 points by the end of 2030 — in doing so diminishing range anxiety, one of the primary reasons people can be reluctant to make the switch to electric cars.

These investments would benefit a raft of American car makers, including Tesla, Lucid and General Motors, which has invested $2.2bn (£1.7bn) in converting a Detroit factory so that it can manufacture exclusively electric vehicles.

Interest in shares in electric car companies has already risen recently thanks to Tesla’s meteoric rise during 2020 to become the world’s most valuable car maker, with share prices rising by 700% across the year.

Its success has even rubbed off on traditional American car makers like GM and Ford, who have both begun the foray into pure-electric motoring: GM with the Chevrolet Bolt and recently announced GMC Hummer EV, and Ford with the Mustang Mach-E.

However, Biden’s presidency is expected to further amplify this effect, due to his investment in clean energy and electric vehicles, as well as his plan to introduce “ambitious” clean air regulations which would compel car makers to electrify their fleets in order to avoid fines.

It has also been suggested that EV start-ups aiming to recreate Tesla’s success, including Fisker (whose Ocean SUV is expected in 2023), Lucid and Rivian could benefit from a stimulus package that would give loans and tax breaks to companies focused on sustainable technology.

California governor Gavin Newsom’s 2021 budget for economic stimulus in the state proposes a $1.5bn fund to speed up the transition to electric vehicles, which will benefit EV companies who reside there — including Tesla.

As part of his campaign, Biden pledged to: “Create one million new jobs in the American auto industry, domestic auto supply chains, and auto infrastructure, from parts to materials to electric vehicle charging stations, positioning American auto workers and manufacturers to win the 21st century; and invest in U.S. auto workers to ensure their jobs are good jobs with a choice to join a union.”

Both Biden and former president Donald Trump spent the final days of their campaigns in Michigan, the home of “Motor City”, Detroit. The city has experienced a well-documented decline over the previous half a century, due in large part to the exodus of American car manufacturers to other locations.

In its prime there were more than 40 vehicle plants in the city; today there are just two, owned by Fiat-Chrysler (now part of Stellantis) and General Motors. The U.S.. Census Bureau cited the city as America’s richest per capita in 1950 but in 2013, the city filed for bankruptcy (the largest city in the the country to do so), and is now rated as the second-poorest in America (after Cleveland, Ohio).

Biden has already claimed some success in the city: according to the U.S. Bureau of Labor Statistics (BLS), 33,000 car manufacturing jobs were created in Michigan during the second term of the Obama Administration, in which Joe Biden was Vice President.

The administration also oversaw the bankruptcy proceedings of two of America’s biggest car companies — Chrysler and GM — in 2009, including a bailout that eventually cost American taxpayers around $10bn.

Biden has previously talked about introducing a car scrappage scheme that would encourage people to trade in their older, more polluting cars for new electric ones. A similar scheme was introduced when he was Vice President in 2009, in order to stimulate the purchase of new cars after the global financial crisis.

The U.S.’ current electric vehicle incentive programme offers up to $7,500 in tax cuts to people who buy electric cars and was introduced under Obama. Biden has said that he will extend that incentive, and some experts reportedly think it could be made even more lucrative. Donald Trump’s administration unsuccessfully tried to scrap the incentive in 2019.

CNBC quoted one financial services executive, Wedbush’s Dan Ives, as saying in an investor vote: “We also believe domestically a Biden Administration taking over in January will likely focus on possibly increasing consumer EV tax credits/ incentives domestically, which could represent another catalyst in U.S. EV adoption beginning in 2021 with Tesla a key beneficiary.”

Trump championed fossil fuels for the duration of his presidency, and his plans to rejuvenate the American car industry were intrinsically linked with his efforts to loosen emissions regulations around the country.

During the first presidential debate he said that cars had become expensive due to car makers’ efforts to improve fuel economy, and argued that deregulating emissions would enable manufacturers to make their wares “much less expensive and much safer”. He also commented on a legal dispute between his administration earlier this year after California decided to set its own (more stringent) emissions regulations, calling it “crazy”.

However, Biden has already signed an executive order directing his agencies to examine dozens of air quality laws set by the previous administration, according to Bloomberg Law. These include Trump’s decision to only compel car makers to become 1.5% more efficient per year, decreased from 5% when Obama was president.