WHEN A Spanish minister’s son died in a car crash, local car giant SEAT vowed to create a car so safe it would eliminate road deaths.

Tellingly, when I ask Stefan Ilijevic, the inventor of the resulting Cristobal prototype, when he gets his best ideas — expecting “In the bath” or similar — he answers: “When the president of Spain tells you to.”

Whatever the motivation, the results could be transformative.

I climb into the Cristobal beside Ilijevic, who is officially SEAT’s Head of Predevelopment, Patents and Innovation, as the first UK reporter allowed behind the wheel. “PLEASE BLOW NOW” booms the car after pressing the Start button. The car won’t even start until I’ve been breathalysed, but as my last gin was 16 hours prior, I pass.

It remains to be seen whether customers would be willing to wait the 20 seconds for their own car to analyse their breath before being allowed to hit the road, but this — and a lot of Cristobal’s features — can be turned on only for certain users. Your young adult children, for example, or booze-loving uncle Steve.

“We want to test for drugs too,” says Ilijevic, “But it’s hard to do the slime test [a tongue swab] in a car.” However his new eye tracking software will be able to spot signs of drug use. Cristobal already uses the camera to know that the driver, not the passenger is taking the breathalyser.

I’ve passed the breathalyser but the car still won’t start until both driver and passenger have put their seatbelts on. No driving off while reaching around for the seatbelt in Cristobal.

The SEAT Leon-based prototype is dripping with wires, the boot stuffed with computers, and squished into a back seat is Alejandro, a technician. At times I’m not sure if he is playing the alerts to me like a puppet master, or I am really triggering them.

Either way, I’m being bombarded with a lot of warning signs.

I ask Ilijevic which of all the safety features will save the most lives. The eye tracker, he answers confidently, pointing to the small cameras on the dashboard. Close your eyes through tiredness and you’re prompted to interact with the touchscreen to prove alertness. But it goes further: with many accidents related to driver distractions, such as by mobile phones, Cristobal will give you a warning, if you take your eyes off the road.

I drive too close to the car in front and get slapped with an audio warning, a flashing dashboard and feel a vibration from the seat.

I break the speed limit momentarily and receive more visual and aural warnings.

I try to open my door while a cyclist approaches; my backside vibrates again and I get another audio alert.

These are great bits of kit and will undoubtedly save lives, so long as people don’t become desensitised. Or worse, over reliant on them and fall foul when they’re in a less safety-oriented car.

At the heart of Cristobal is the Mentor App — great for parents, insurers and fleet managers. At a touch you can limit the car’s speed and select where it can drive.

If your child drives beyond their allocated zone, the parent receives a warning. “I can then call him and say, ‘Why did you leave the Zone?’ explains Ilijevic. “He says, there was a nice girl and I had to drive her home. Sorry, I’m coming back now. He has to justify and he knows I’m tracking him.”

Doesn’t this nannying infringe on the fundamentals of motoring — freedom and passion?

“I am also a fan of freedom but we have to be aware that young people have a different perception of speed and danger,” says Ilijevic. “They are more adrenaline-like drivers. They are not aware they are not only putting themselves in danger but other persons. We can save lives with this car.”

But what about privacy? Could this tech be used to track cheating partners? “Maybe we can add something so both sides have to give the authorisation. These are the side effects we have to take into account when we design these systems.”

The car also has an aircraft-style black box recorder. In the event of a crash or sudden deceleration, the video, speed, trajectory and braking information are stored securely, ready to be accessed by the emergency services. It also acts as a psychological deterrent to bad driving.

Other features are less controversial. The rearview mirror can turn into a video monitor displaying a 175-degree view behind; great for eliminating blind spots, visibility in low light and allowing passengers, not just the driver, to also see what’s behind.

And the engineers at SEAT are already planning how to incorporate ultrafast 5G internet into Cristobal. They foresee a time when you’ll be able to see through the car in front (using their onboard cameras) to make overtaking safer. 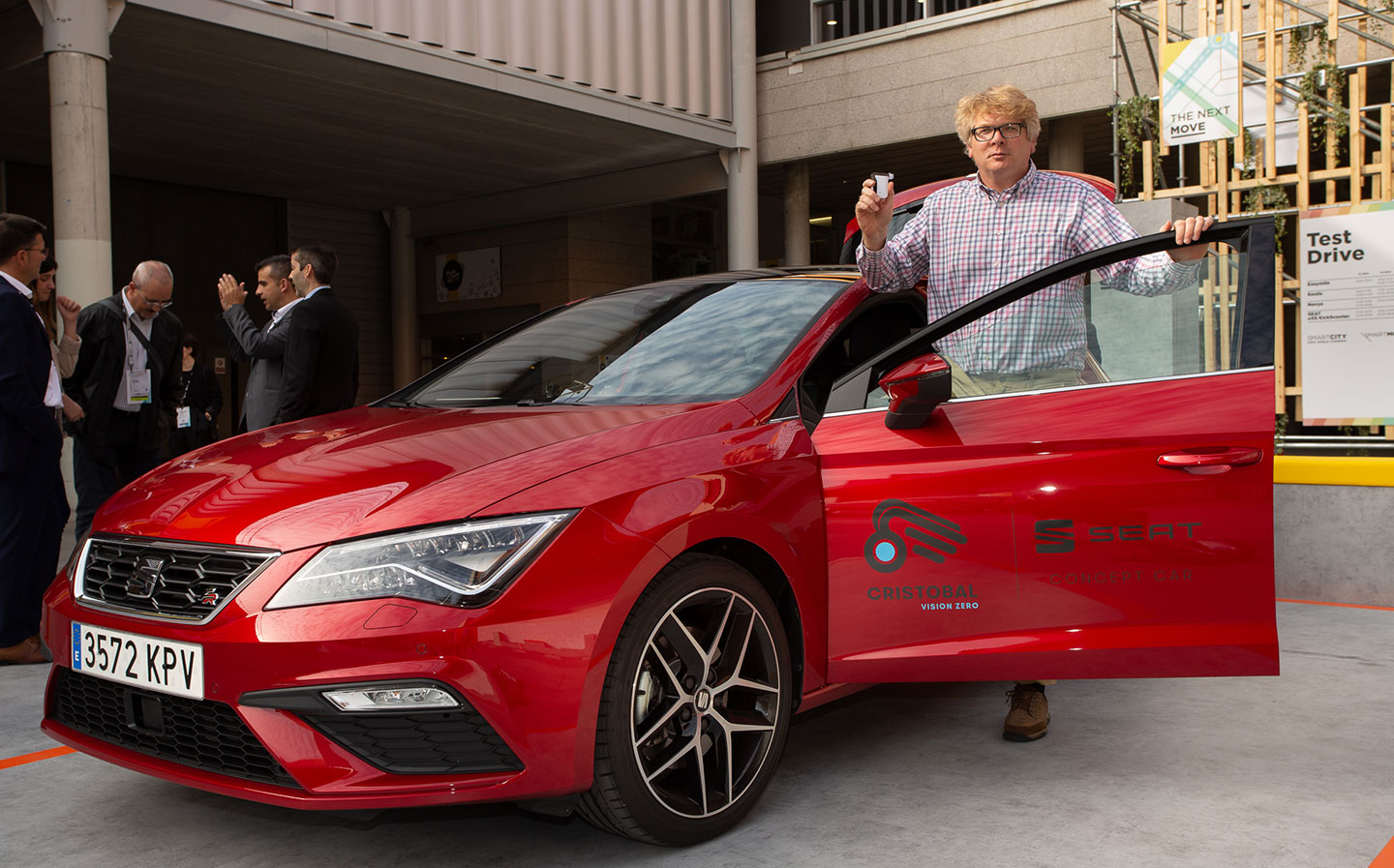 Alarmingly, in the most literal of senses, I trigger more speed warnings. Could the car actually limit my speed, and is that desirable?

“We have a speed limiter, but we turn it off,” says Ilijevic. “The problem is, this does not work in real life. You are an obstacle. No-one drives at 50kmh when the limit is 50kmh. Practically, it makes the car more dangerous.”

So, speed limiting wouldn’t work on London’s increasing number of 20mph roads? “No. There are times when you need more speed or acceleration.”

Is SEAT in a rush to get these technologies out before rival car makers, I ask.

“All brands are looking at safety,” he says. “Volvo, Mercedes. But I don’t consider them direct competitors. They are in a premium class, we are mass. It’s not only about technical feasibility, it’s also about the business case and the user experience.”

As more and more warnings boom out at me, my seat vibrates and the dashboard flashes warnings, I can feel the pride radiating off Ilijevic.

“It’s a very nice project. Knowing that you are doing something to save lives. It makes an engineer’s heart beat with a higher beat. It’s not only about getting faster bigger and wider… we should never forget driver safety.”

Booze cruise: why it’s rarely safe to drive the morning after drinking alcohol

Drug driving: How the law has finally caught up with doped up motorists