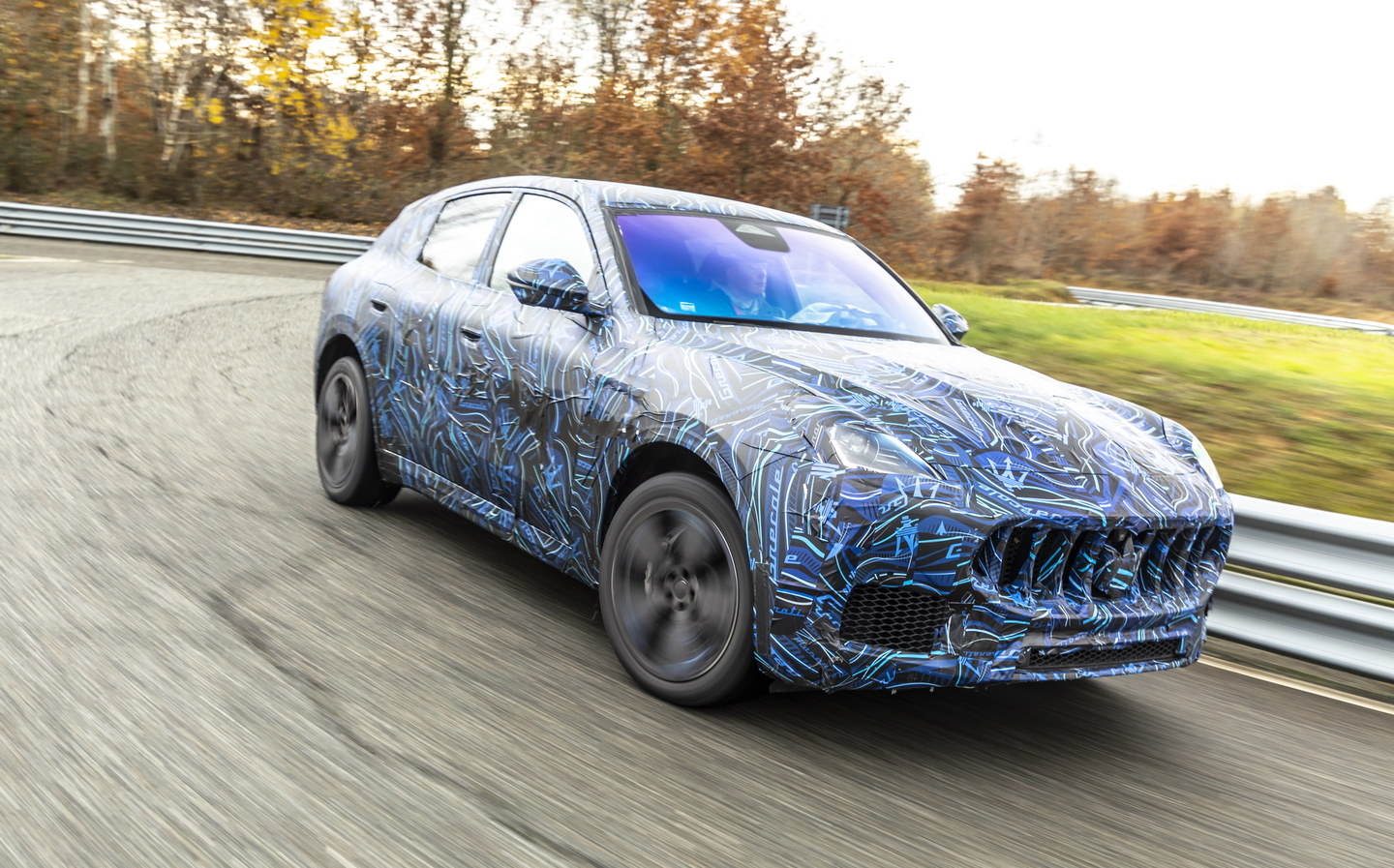 In 2022, Maserati will launch what could become its best-selling model of all time, the Grecale SUV. Sitting below the existing Levante in the Italian brand’s line-up, the Grecale shares parts of its platform with the Alfa Romeo Stelvio and is unashamedly targeted at the accomplished Porsche Macan.

A combination of factors, including coronavirus restrictions and semiconductor shortages, have delayed the public unveiling and start of production of the Grecale so, to keep interest in the car alive, Maserati invited us along to its test track in Italy to have a go in one of the 250 prototypes it has built for the development of the car.

For now, the Grecale’s design is under wraps. Quite literally in the case of our test vehicle, which was covered in a swirly brain-fooling camouflage. Nonetheless, it’s not difficult to discern the overall proportions and design language of the SUV, and it looks to follow the current Maserati school of design with lots of curves, high-tech LED lights and a bold grille set low down in the nose.

The Maserati trident is notably large in the middle of that and the same shape is repeated in the style of the 20-inch alloy wheels fitted to our test car.

In terms of size, while the Grecale uses the Alfa Stelvio’s platform as a basis, the wheelbase (the distance between the front and rear axles) has been lengthened, so the Maserati is a larger car inside and out. It’s also bigger than the Porsche Macan on the outside, which should be to the benefit of interior and boot space.

Other potential rivals of the Grecale are high-spec versions of cars such as the Audi Q5, BMW X3 and X4, Mercedes GLC, Jaguar F-Pace and Range Rover Velar.

While Maserati wouldn’t let us take any pictures of the Grecale’s dashboard, we did get a chance to lift the covers, and it’s impressive, taking a whole new digital direction for the company.

In front of the driver is a large, customisable digital display for the instruments. In the middle of the dashboard there’s a digitally rendered circular screen that replaces Maserati’s traditional analogue clock. Below that is a 12.3in touchscreen (more of which below), which is typical enough, but underneath is another, an 8.8in touch panel that’s angled out from the dash and allows alteration of a multitude of sub-systems, from the climate control to the lights and suspension settings. It looks smart and works well.

This design seems to free up the centre console for storage, and there’s loads of it.

The rear doors open wide and adults can easily fit in the outer two seats. There is a bit of a transmission tunnel that reduces comfort for the middle seat occupant, but it’s more spacious than is the norm in the sector.

Same story for the boot, which holds 535 litres with the rear seats in place. It’s accessed by an electric tailgate and the rear seat backs fold down flat to allow for carrying longer loads.

The infotainment is referred to as the Maserati Intelligent Assistant (MIA) Multimedia System and that 12.3in screen is at its centre. It has a resolution of 15 million pixels in ‘Ultra HD’ and backing it up is the Android Auto operating system.

This is responsive and easy to use, and it allows for a lot of customisation, even facilitating multiple tab-based screens. Five different users can store their preferences for its layout, and this links into other parts of the car, such as preferred climate control temperature and positioning of the seat and mirrors. Two different smartphones can be connected via Bluetooth at the same time with Apple CarPlay and Android Auto functionality for each, too.

Other features of note include “Hey Maserati” voice control and Maserati Connect, a suite of services using the car’s built-in, always-connected 3G sim card. Amazon Alexa can be used in the car, as can a Wi-Fi hotspot using the car’s connection to the internet.

There will be more powerful versions of the Grecale in time, most likely using a version of the MC20’s twin-turbocharged V6 engine, along with a fully-electric variant, but for now, the only one Maserati has confirmed is the hybrid.

This uses the same basic powertrain as found in the Ghibli Hybrid, with a turbocharged 2.0-litre petrol engine at its heart. To that is added a 48-volt mild-hybrid system with a difference. It does the usual thing of recuperating energy when decelerating to charge up a supplementary battery, using a Belt Starter Generator that can also start the engine.

However, to all that is added what Maserati calls an ‘e-Booster’, effectively an electrically powered turbocharger. The use of this design allowed optimisation of the exhaust turbocharger for higher speeds, while the e-Booster reduces lag at lower speeds. It’s effective on the move, and its operation is imperceptible. What’s more, the calibration of the system is tied into the driving modes, so there’s notably more response to the accelerator pedal when the Sport setting is selected, for example.

Surely the e-Booster plays a big part in the availability of maximum torque — 332lb ft — all the way from 2,000- to 4,000rpm. Rev the engine out and it produces 295bhp at 5,750rpm, and sounds suitably sporty breathing through an active exhaust system when you do so. Maserati quotes a 0-62mph time of just 5.6 seconds and a top speed of 150mph.

No doubt the quick-shifting eight-speed automatic gearbox and variable all-wheel-drive system help with that sprint off the line. The Grecale Hybrid feels pleasingly quick rather than sports car rapid, which is just fine for what is likely to be the entry-level version.

In its top specification, as tested here, the Grecale comes with air springs and adjustable damping, a setup that gives the SUV a wide breadth of capability, one that is neatly spread over four driver-selectable modes — Comfort, GT, Sport and Off-Road.

A wide variety of sub-systems are tweaked as you toggle through the modes, including the power steering, accelerator response, gearbox calibration, stability control, all-wheel drive, exhaust and even ride height — and there’s a tangible difference between the three road-biased modes, too.

On this occasion we didn’t get an opportunity to test the Grecale’s mettle away from the asphalt.

Most buyers won’t either, and they’ll be happy to hear that the new SUV drives remarkably well. Even in damp and greasy conditions, the Grecale proved to be decidedly engaging and fun to drive.

The steering is brimming with feedback when you want it, but the steering wheel is otherwise calm in your hands, and no matter which driving mode is selected, it never weights up as much as is the case in some sporty SUVs.

In Sport mode, the Grecale really comes alive, with instant response to throttle inputs, a lower ride height, firmer damping, a quicker-acting gearbox and even a more relaxed stability and traction control system. The all-wheel-drive system obviously sends more of the engine output to the rear axle in this guise, too, and it feels remarkably frisky.

That can be dialled down a tad in GT mode, with the inherently sporting personality still shining through, or completely soften out in the Comfort setting.

Not all versions of the Grecale will come with air suspension and adjustable damping, but it bodes well for the car that it feels biddable in all the settings and that it’s instantly likeable from behind the wheel.

Maserati is confident that the Grecale will go into production and hit the market in 2022, but wouldn’t be drawn on a precise date for its introduction as it’s contingent on other factors.

The Porsche Macan starts at under £49,000 while the Stelvio starts at a touch over £45,000, though the Grecale is more powerful and more spacious than the basic Macan, so it’s anyone’s guess where Maserati will pitch it.

In the limited circumstances of this test drive, it’s clear that the Grecale has a lot of promise. When loaded with all the options, it drives remarkably well, in a sportier and more engaging manner than most SUVs of this size. And yet, Maserati has not sacrificed its utility for that, as the Grecale has a spacious, versatile and high-tech cabin, too. It bodes well for the brand’s prospects for 2022 and beyond.