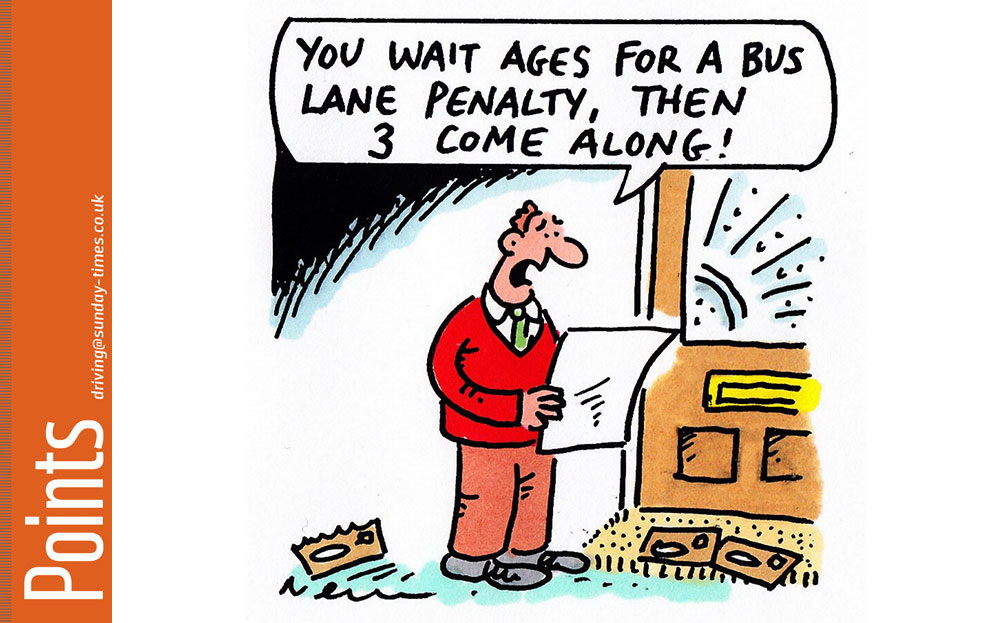 I agree with most of Ken Adkin’s tongue-in-cheek resolutions but I do not understand his objection to drivers keeping their foot on the brake at traffic lights (“Resolution road”, Points, last week). Failing to do so in my Jaguar XF deactivates the stop-start system.

Mr Adkin could also resolve to sit in lane three of the four-lane stretches of the M25, even when there is nothing in lanes one and two. This movement seems to have a growing membership.

A little while ago, returning home late at night on a main road into Chester, I noticed the chap behind had his fog lights on, and bright they were. The road ahead looked clear under the streetlights, but I thought he must know something I did not and that therefore I should join him, so I switched on my rear fog lights. Oh, how he loved that, flashing his lights to show his appreciation over the course of the next couple of miles.

Married to the fob

Keyless ignition also generally means keyless entry, so there’s no need to take the fob out of your pocket, let alone leave it on the roof (“Off key”, Points, last week). Walk away and the car locks, so you can’t forget that either.

My Toyota Auris had keyless ignition. Should the keyholder leave the car with the engine running, a message on the dashboard lit up, saying “Key not detected” followed by an audible tone until the key was back in the car. I thought this was standard.

As petrol prices in America have fallen by a much larger percentage than those in the UK, reflecting the lower tax level (“Give and take”, Points, last week), why have low-tax LPG prices in the UK not fallen as much?

When insuring my new VW Golf GTE, I had a similar experience to David Moore with his Honda Civic Type R (“Losing track”, Points, last week). An additional condition was that “a tracking device is fitted”. I realised the VW Car-Net system that comes with the car talks to my phone and can provide its parking location. It is therefore, among other things, a tracking device. My wife is wondering how I know where she has been. Does Honda have something similar?

Your article on seats for older children downgraded some of the seats for not having Isofix (“Mum, this seat’s so cool I won’t moan about using it”, last week). Isofix is of most safety benefit in seats for children under four, who are strapped directly to the seat; older children should be secured using the car’s own seatbelt, passed through the child seat. The main benefit of Isofix in seats for older children is that it stops the seat moving when the child is not in it, but this also makes for an extra step when transferring from one car to another, which was one of your gripes. It also adds weight and a considerable price premium.

How many council employees are ticketed for entering bus lanes (“Putting a stop to the bus lane cash cow”, last week)? When I was living in a small town, it transpired that parking wardens were able to identify vehicles belonging to council employees and were told to ignore parking violations. Has anything changed?

The suggestion that drivers could enter a bus lane “a few yards” before it ended is daft. Would that be five or 10 or 100 yards? The bus lane ends where it ends. If you don’t want a penalty don’t go in it.

Although Allan Kornbluth will not have to pay the penalty, the council is no worse off as a result of its overzealous anti-motorist policies. On losing an appeal, the council should be made to pay a fine to the appellant.

The argument about bus lanes is no different from most other enforcement and appeals procedures: there is room for latitude, discretion or plain common sense to be applied.

Unfortunately, the target culture and determination to make money wherever possible has infected police and local authority staff to the extent that the attitude is simply to demand payment, irrespective of the circumstances of any individual case.

Even in the pea-souper fogs of the 1950s most drivers managed with just sidelights, perhaps reducing speed to maintain safety. Despite vastly enhanced street lighting today, most now seem to need xenon headlights plus bright running lights. And how is it that a British-registered car travelling on the Continent needs lens converters to avoid dazzling oncoming drivers but needs no such thing in this country to stop pedestrians on their near side being dazzled?

Living with single-track lanes in the rural Scottish Borders, I am intrigued by the prospect of driverless cars. Can we assume that, just like us mere mortals, they will have the ability to swerve around suspension-wrecking potholes and mount grassy, muddy verges to get past oncoming vehicles?

Recently, a road near where I live was resurfaced. Great: no potholes now. Last week it rained hard and it was like driving along a stream. It was obvious why: no camber and no gutters. I then noticed that other recent roadworks likewise left no gutters. Is this a result of using modern road-laying equipment? Bring back the gutter!