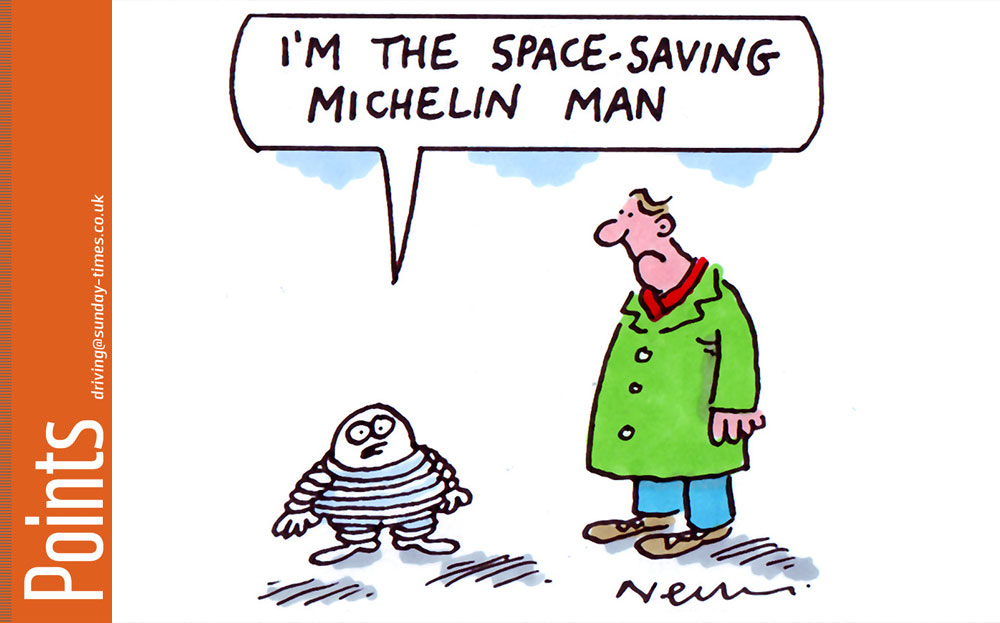 I’d like to share my new year’s motoring resolutions with one and all. I resolve to drive in the middle of the road whenever possible, stop signalling (especially at roundabouts), never look in my rear-view mirror, act as though I don’t know the rules on box junctions and keep my foot on the brake at traffic lights. As a bonus, I will become part of a movement that’s sweeping Britain.
Ken Adkin, Cheadle Hulme, Greater Manchester

Get with the programs

I think some correspondents are nostalgic for a man walking in front of the car and waving a flag (“Pure and simple”, Points, December 27). I have the latest Volkswagen Golf and it’s brilliant. Two of the things I love about it are the electronic handbrake and the adaptive cruise control. Like most innovations, they just take a little time to get used to.
Paul Carroll, via email

What is this nonsense about drivers turning off their stop-start systems? Do they really prefer sitting at traffic lights belching out exhaust fumes to sitting in silence at no cost to themselves or the environment? With all the indignation about VW fitting software to cheat in emission tests, it seems drivers are deliberately disabling a feature that cuts emissions to zero while they are stationary. I do not understand it.
Arthur Doughty, Boston, Lincolnshire

I appreciate that Alastair Hacket saved more than £100 by substituting a Mazda tyre inflation kit for an £8.50 generic version (“Inflated price”, Points, December 27). However, he might like to reflect on the fact that when I pulled onto the hard shoulder of the M3 with a puncture, within the legal speed limit and with a good-quality tyre, all that was left of the side walls was a heap of rubber powder. Fortunately Volvo had provided a space-saver. A proper spare would have been better, but it was enough to get me home.
Ernest Mallett, East Molesey, Surrey

A friend who worked as an AA patrolman (“Keyed up”, Points, December 27) was called out to a driver whose new car had cut out on a motorway slip road. It had keyless ignition so he asked to see the key fob. The driver searched her handbag, to no avail, and then remembered being flustered when setting off and finally recalled that she must have left the fob on the car roof. This was close enough to light up the dashboard, so she started the engine and drove off, thinking no more about it. When will manufacturers admit that proximity ignition keys are a dangerous liability?
Andy Child, via email

David Rowe falls into the trap of attributing all accidents that occur when streetlights are switched off to the lack of lighting (“Dark secret”, Points, December 27). Even when the lights are left blazing away, wasting power and ruining the night sky, there will still be felled lampposts and flattened traffic islands.
Robert Howells, Wiston, West Sussex

Street lighting was introduced for pedestrians in the age of horse-drawn transport. There has been no change. The lights are not there to show motorists the road ahead — that’s what headlamps are for.
Simon Smith, Maidstone

The price is right

The petrol and diesel pump prices quoted by Carl Wright include 20% VAT and 57.95p a litre of excise duty (“Paying the price”, Points, December 27). Factor them out and the sums he is paying reflect the fall in the oil price reasonably closely. In order to maintain supply security, oil companies carry significant quantities of fuel, so it is not that easy to pass on drops in price, but they do try to remain competitive.
John Sallis, Bramcote, Nottinghamshire

“Gas” prices in America have fallen by a much larger percentage than those in the UK — a reflection of the significantly lower tax level.
Russ Pressney, Covington, Louisiana, USA

Richard Haszko’s concern about people who drive off road instead of walking is unnecessary (“Driving hikers wild”, Points, December 27). With the Land Rover Defender’s reliability they’re likely to get the chance to do both.
John Mitchells, Flintshire

Pat on the back

What a treat to have an extra Pat Malone column (“Let’s give this old warhorse one final Highland fling”, December 20). His motorbike reviews are full of fun and very readable even for non-bikers such as myself
Sheila Knight, Woodbridge, Suffolk

Defender has a feminine side

Malone says it is largely men who find themselves in mystic communion with their Defenders. When my son contemplated buying a new one, all three of his daughters, aged 12 to 15, insisted on coming on the test run — not just for the drive but also, more importantly, to ensure Daddy made the right decision. He did.
John Ingham, Dorchester-on-Thames, Oxfordshire

I recently returned from a Dover to Dunkirk ferry trip. On rejoining their cars, at least 25% of drivers ignored the instructions and started their engines immediately. What has got into them? They won’t get off the ferry any quicker and cars start reliably nowadays.
Roger Flavell, Barlaston, Staffordshire

I was thinking of buying the new Honda Civic Type R, so I got a quote from my insurer. It stated that a “tracker” would be a requirement. I was then referred to a linked company, presumably a reinsurance specialist. Have any readers had a similar experience? Is it related to vulnerabilities in the keyless entry system?
David Moore, Helensburgh, Argyll and Bute

Forget about emissions and cheating software, Herr Volkswagen. What about the two broken doorlocks on my 58-registration Audi A3 2.0 TDI? A common fault creating a steady demand for spares, apparently — and, at £250 a go, not cheap either.
Brian Crofton, Worthington, Leicestershire