HEAD-UP displays in vehicles are about to take a technological leap as Volkswagen introduces augmented reality into its ID.3 and ID.4 electric cars, merging the real virtual and worlds in front of the driver.

The technology uses cameras, radar and GPS to scan the road in front of the cars and then project information onto the windscreen that appears to the eye to be interacting with the environment ahead.

Floating arrows superimposed onto a set point in the distance can direct drivers towards a turning on their satellite navigation route, red lines can clearly mark when gaps to the car in front are too small and lane markings can be highlighted with colour when the driver’s vehicle begins to drift out of lane.

Augmented reality head-up displays have been in development for at least 10 years but Volkswagen clams it is the first volume manufacturer to introduce the new technology in the compact car segment, and is therefore making it affordable for many customers.

“We have introduced a genuine innovation in series production,” said Frank Welsch, member of VW’s Board of Management for Development. “And we have done this not in a premium vehicle, but in the compact models of the all-electric ID. family. Making pioneering technologies available to a large number of customers is a core competency of Volkswagen.”

The VW augmented reality system is made possible thanks to its picture generation unit (PGU) display, located inside the dashboard. A bright LCD display creates the images and projects them via mirrors onto the windscreen, in the driver’s field of view.

The image is split into to sections. The larger upper section is for far-range dynamic displays, such as the driver assist systems and navigation information as described above. Volkswagen says the symbols appear real-world sharp when displayed at an apparent distance in front of the car of just under 10 metres. 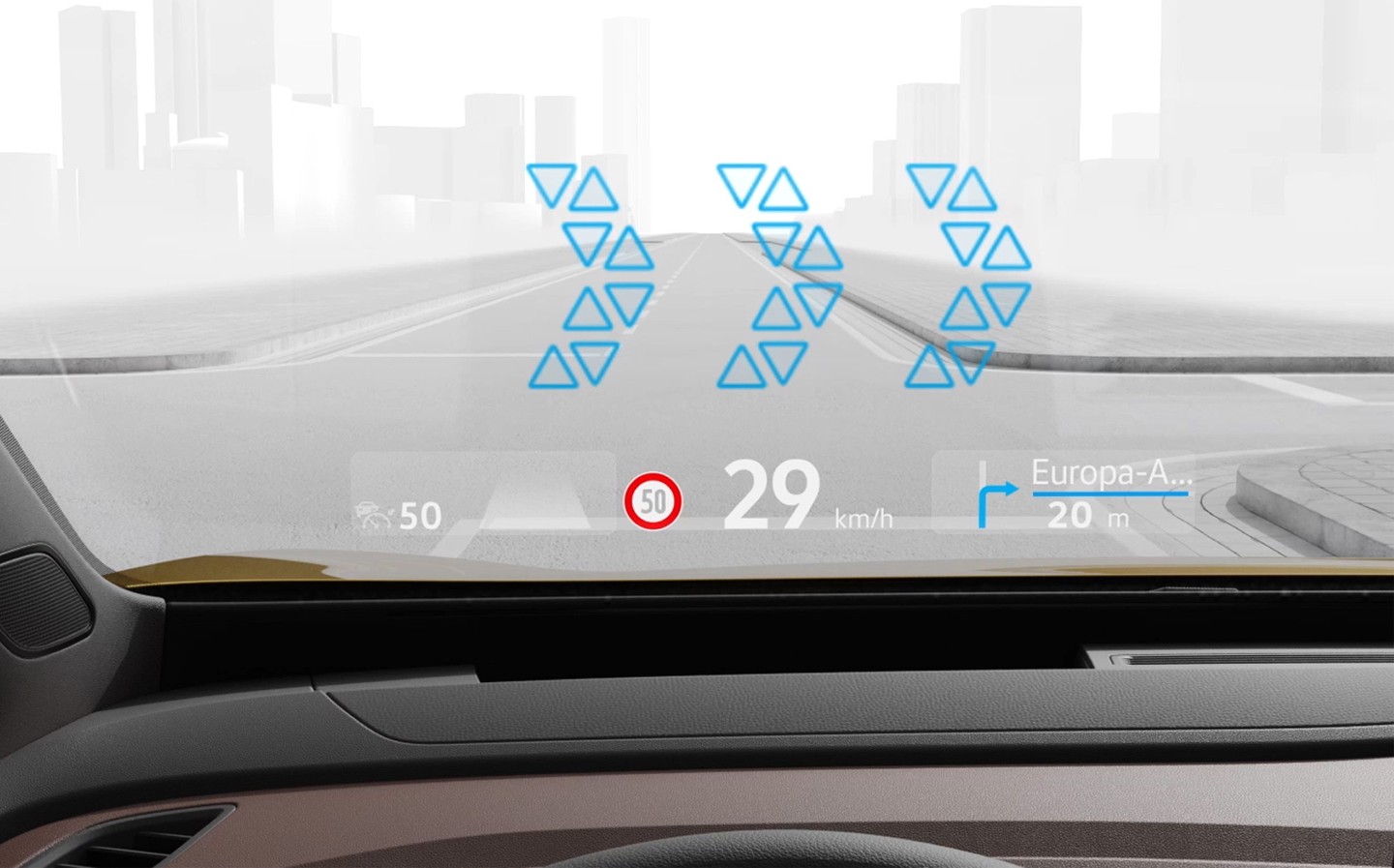 An “AR creator” inside one of the cars’ two central computers calculates the positioning of the symbols in relation to their surroundings using its camera, radar and GPS inputs. The projected far-range information is stabilised using the lenses to counter the vehicle’s movements.

Below this far-range image is an area for other information such as driving speed, road signs, and assist and navigation symbols. These are what VW calls static close-range displays, and they’re much as you’d find on a standard HUD. The close-range information appears to float around three metres in front of the driver.

When following the sat nav and approaching a turn, the driver sees an advance notification at road level as well as three arrows located at the junction. The closer the driver gets to the junction, the larger the arrows become.

At the same time, the opacity of the arrows decreases as the driver nears the junction in order to ensure a clear view of the road. Volkswagen says it followed the basic concept of “Less is more” in order not to overwhelm drivers with distracting information.

When drifting out of lane without indicating, the boundary line is displayed in orange. Two green lines appear after switching on Travel Assist, which keeps the car in the middle of the lane.

When using Adaptive Cruise Control (ACC) or Travel Assist, vehicles in front are marked with a coloured stripe, though even with these assist systems switched off, the driver sees a red warning signal if they drive dangerously close to the vehicle in front.

Volkswagen UK told Driving.co.uk the hardware required for the AR head-up display isn’t available on the ID.3 First Edition models, many of which have already been delivered, though any cars ordered from now in Tech, Max or Tour grades will feature the system as standard and will be available for delivery from January.

According to VW, those ordering the ID.4 will be able to add the system by opting for the Infotainment package Plus, which also includes the Discover Pro navigation system with touch display. It will also come as standard on the Tech, Max and Tour grades of ID.4.

The Volkswagen Group is investing €33bn in electric mobility by 2024 as part its “Transform 2025+” strategy, with €11bn going to the VW brand alone. The ID.4 is the first pure-electric SUV from Volkswagen and follows the Golf-sized the ID.3 hatchback.

If you enjoyed reading about the Volkswagen ID.3 and ID.4 getting augmented reality head-up displays, you may be interested in our list of the best 10 electric cars with a range of 300 miles or more or our long-term test of the Mini Electric.