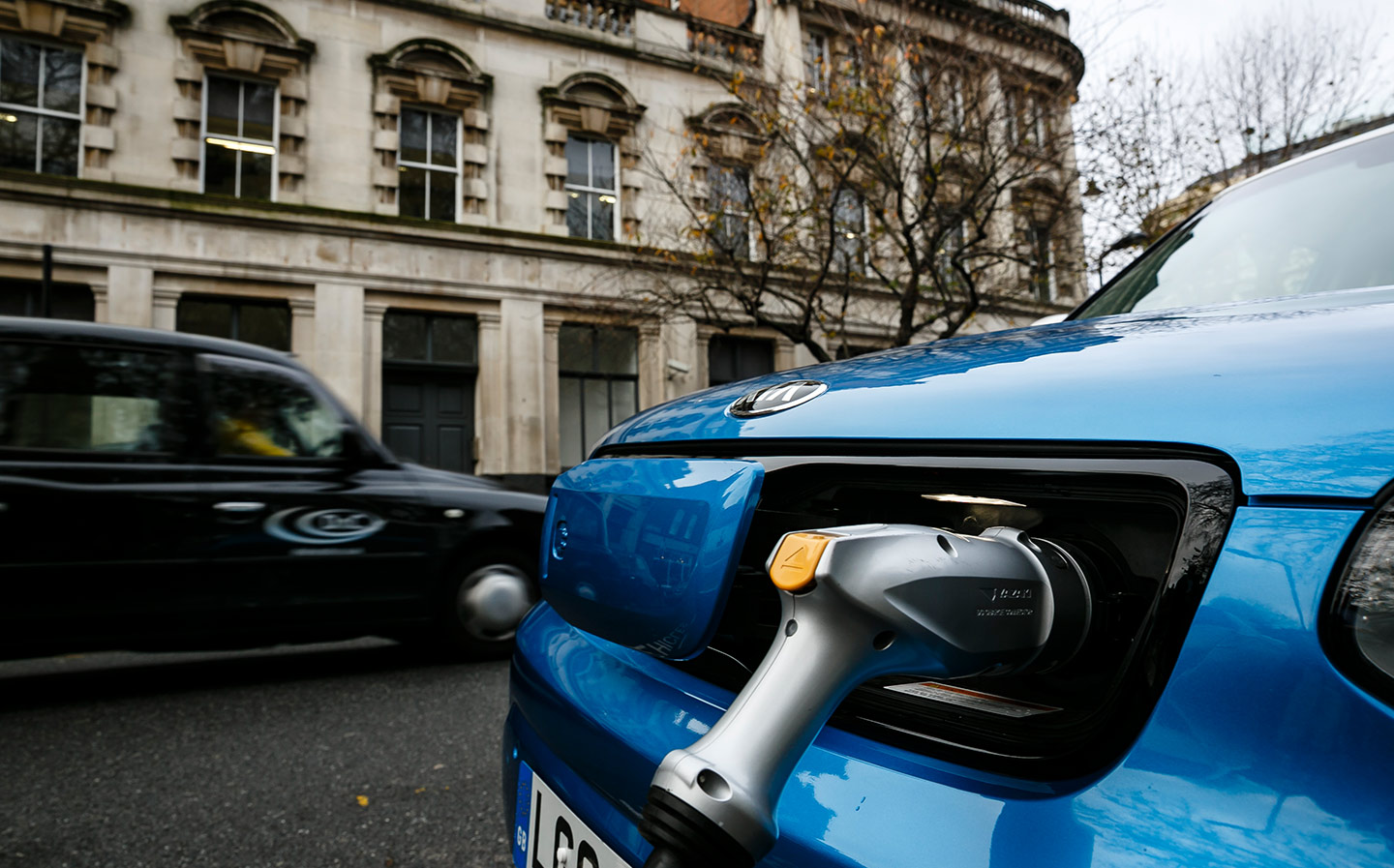 ALL NEW cars and vans should be genuinely zero emission by 2032, according to a new report from a group of cross-party MPs.

The Business, Energy and Industrial Strategy Committee criticised the Government’s existing targets for zero emission cars. The current Road to Zero strategy aims to see between 50% and 70% of new car sales, and up to 40% of van sales, being “ultra-low emission” by 2030, with only sales of “effectively zero emissions” vehicles by 2040.

This strategy is “vague and unambitious”, according to the Committee, as it doesn’t properly explain the role of plug-in hybrid (PHEV) cars, which can run on battery power alone for a number of miles but include an internal combustion engine for longer trips under hybrid power.

The Committee said that “zero should mean zero” and that the 2040 target was not ambitious enough. Recognising the potential of plug-in vehicles to reduce greenhouse gas emissions and local air pollution, it recommended that the Government “prioritise overarching policy goals on climate change and air quality over sectoral interests, and bring forwards a clear, precise target for new sales of cars and vans to be truly zero emission by 2032.”

According to the ‘Electric vehicles: driving the transition’ report:

“The Government’s lack of clarity on the meaning of the 2040 targets is unacceptable. Industry cannot be expected to make supportive investment decisions when Ministers and officials themselves cannot say how the target should be interpreted.”

The report says PHEVs could have a role to play during the EV transition, at least in the near term—but non-plug-in hybrids are not compatible with the Government’s longterm climate change commitments.

“We recommend that the Government either acknowledge that petrol and diesel will ultimately need to be fully phased out from cars and vans, or admit that it is not seeking a zero emissions fleet. It cannot have both.”

“The Committee on Climate Change has made clear in their judgements on the Clean Growth Strategy and the ‘Road to Zero’ strategy that these plans do not go far enough to tackle transport emissions, putting the UK’s long-term carbon reduction targets at risk. A more joined-up and consistent approach is needed from Government if the UK is to seize the business opportunities of electric vehicles and deliver carbon emissions reductions.”

“To tackle the dangerous and illegal levels of air pollution in this country we need far more ambition from the government. Calling time on petrol and diesel sales earlier would be a fine example of this but we need immediate action to tackle the air pollution that’s currently seriously damaging our health.”

A world leader in electric vehicles

Statements from the Department for Transport during the inquiry indicated that the Government has “conceded its ‘world leading’ ambition [for electric vehicle technology] in all but name”, according to the Committee.

Richard Bruce, DfT Director, told the panel that a truly zero emission strategy was not necessary in the UK because stricter emissions abroad would likely lead to a de-facto zero emission standard.

The report quotes Bruce as saying: “The vast majority [of vehicles in the UK]—will be 100% zero because, in regulatory terms, that is what manufacturers are going to have to make to sell cars in China, in the US and in Europe.”

This unambitious approach undermines the Government’s previous statements and hampers UK chances of gaining a competitive edge in the EV market, according to the Committee.

A 2032 target for genuinely pure-electric cars would align England, Wales and Northern Ireland with Scotland, which has already laid out its ambition to phase out traditional internal combustion engine (ICE) cars and vans by that date.

The Governments of India, China, Slovenia, Austria, Israel, the Netherlands and Ireland have all committed to phase-out sales of new conventional fossil fuel vehicles by 2030, while Norway has said it will do so by 2025.

The UK will need to “match, or better, international commitments”, according to today’s report, which adds: “It is … unclear why the Government is choosing to set an ambition lower than that anticipated by our international competitors.”

Reeves said: “For all the rhetoric of the UK becoming a world leader in EVs, the reality is that the Government’s deeds do not match the ambitions of their words.”

Impact on the car industry

The Committee acknowledged concerns from the UK motor industry and Unite union that bringing the target date forwards could lead to job losses, but insisted that for the UK automotive sector to remain globally competitive, it should “seek to lead, rather than follow, as the world transitions from ICEs to EVs, and as we depart the EU”.

At the end of September the European Automobile Manufacturers’ Association (ACEA) warned that toughening CO2 targets in order to accelerate the shift to electric vehicles could put the “long-term viability” of the European automotive sector at risk, pointing out that pure-electric vehicles have fewer moving parts than tradition combustion engine vehicles, so their production requires “less manufacturing labour”.

“Consumer appetite would have to grow by some 17,000% in just over a decade”

It should come as no surprise, then, that high-volume car makers aren’t making strong commitments to drop internal combustion engines within the next 14 years. Of the manufacturers featured in a Committee on Climate Change report from June this year, Porsche was the only one that said it was planning to sell electric cars only within the timeframe, with 100% EV sales by 2030.

Today’s BEIS Committee report said for this reason, the UK Government must support the domestic industry and workers through the transition to electric vehicles “by creating an attractive domestic environment for investment”.

However, reacting to the report, Mike Hawes, Chief Executive of the Society of Motor Manufacturers and Traders (SMMT), said: “Government’s 2040 ambition was already extremely challenging, so to fast-track that by eight years would be nigh on impossible.”

He added: “Zero emission vehicles make up just 0.6% of the market meaning consumer appetite would have to grow by some 17,000% in just over a decade. This is unrealistic and rejects the evidence put forward by SMMT on behalf of the industry, which is investing billions into these technologies but which recognises consumers need greater confidence and support if they are to buy these vehicles in the numbers we all want.”

The BEIS Committee report admits that getting drivers to shift from petrol and diesel to electric cars will require continued Government incentives and increased investment in charging infrastructure.

Last week, the Government announced that the Plug-in Car Grant would be cut from November 9, with the maximum grant for pure-electric cars dropping to £3,500 and the grant for PHEVs being removed entirely.

This decision has been made too soon and too suddenly, the Committee said, and recommended that purchase support for EVs should be maintained at the current levels, and more generally until the cost of EVs nears price parity with conventional ICE vehicles. Market projections suggest that EVs could reach price equivalency with ICEs by the mid-2020s.

Reeves said: “The Department for Transport’s slashing of the Plug-in Grant scheme drives the incentives of buying an electric vehicle into reverse. Cutting support is a perverse way to encourage drivers to move to non-polluting cars. This is only the latest sign of the Government’s inconsistent approach to developing the market for electric vehicles.”

It also said the UK should follow the example set by Norway, which has also adopted a “50% rule” under which fees for parking, ferries and toll roads paid by EVs are at most half the level of fees paid by traditional petrol and diesel cars. Norway leads the world in sales of electric vehicles per capita, with them taking a 39% market share last year. By comparison, EVs represented just 2% of the UK market in 2017.

The report also lamented the fact that Benefit-in-Kind rates for company car users will rise from 13% to 16% in 2019-20, before they are reduced to 2% in 2020-21. “This is effectively encouraging company car purchasers to wait until 2021 before they invest in an EV,” it said.

Increased demand on the National Grid

Media reports last year suggested that a massive increase in electric vehicle use would result in “brownouts” and drops in electricity supply. The Times falsely reported that the UK would need to build 20 new nuclear power stations but later updated the article online and apologised for “a significant miscalculation based on a confusion of energy and power”. A Financial Times article suggesting the UK’s generation capacity would need to increase by 70% is still available.

After hearing evidence from representatives of the National Grid, the Committee concluded such reports were “overblown”.

In fact, the National Grid told the Committee it would “welcome an increase in the national ambition on EV deployment” and that it is “confident that sufficient new generation capacity, as well as grid reinforcements and demand management technologies, can be brought online in time to meet the increase in demand.”

However, the report recognises there will be an increase in energy demand, particularly in localised clusters, and therefore the EV transition “strengthens the case for new power generation plant” that meets the “overarching aim of least cost decarbonisation”.

It also welcomes the Government’s recent £30m investment in Vehicle-to-Grid (V2G) research and development, which allows electric vehicles plugged in to a socket to help balance the network by feeding power back from the battery into the Grid at times of peak demand.