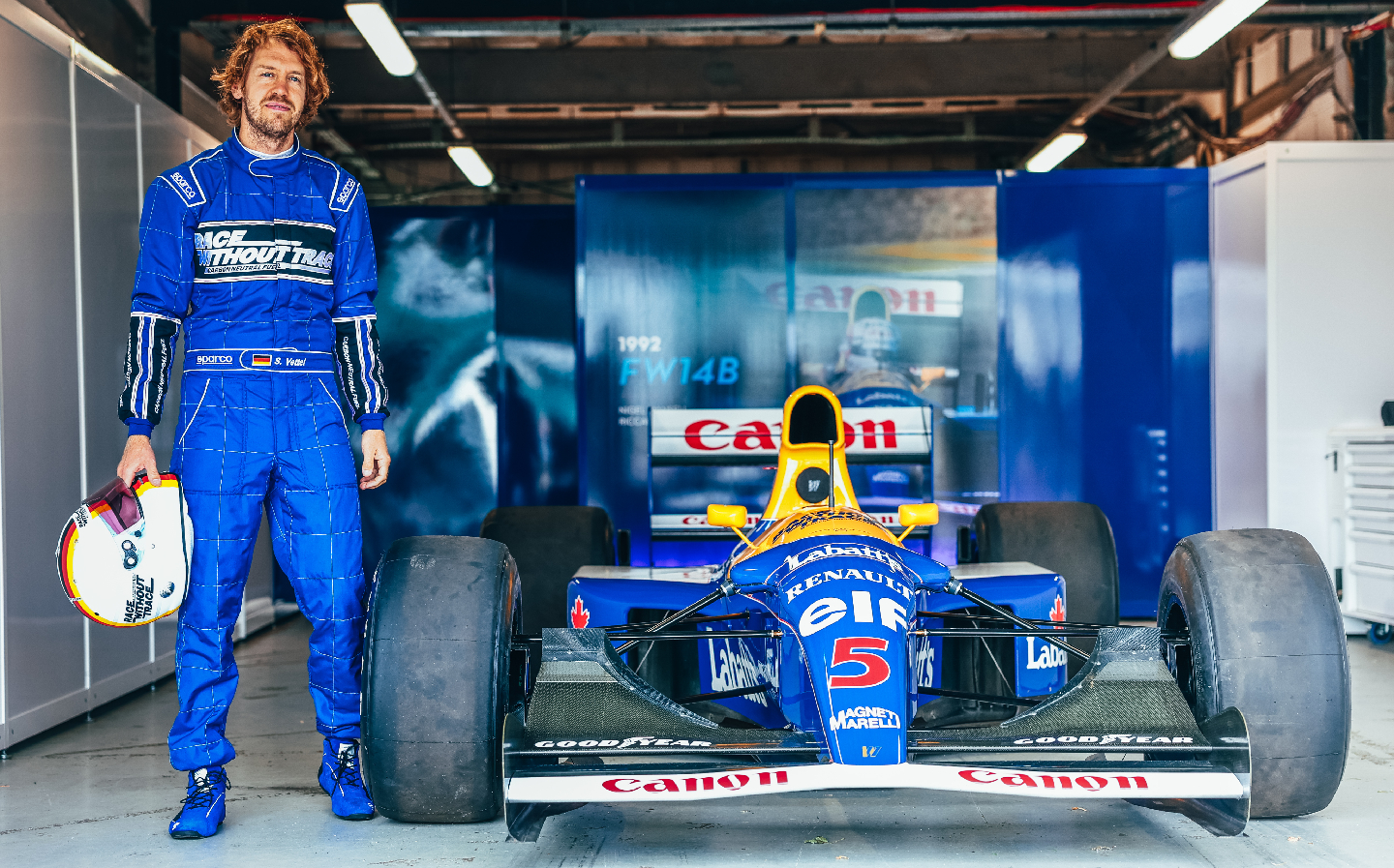 F1 driver Sebastian Vettel will take to the Silverstone circuit on Sunday in the car with which Nigel Mansell won the British Grand Prix (and the world championship) 30 years ago … only this time the classic Williams FW14B will be powered by environmentally-friendly synthetic fuel.

The four-times world champion will get behind the wheel of the Renault-engined car, which he now owns, for a couple of demonstration laps on Sunday morning before the 2022 British GP. Although the car is green in terms of its emissions, it still looks as it did when Mansell drove it to victory in 1992.

“You will see it on Sunday, it’s no different to how the car was 30 years ago,” said Vettel, speaking at an event yesterday. “It will sound exactly the same, it will drive the same way, and I will not try within a couple of laps to go to the absolute limit. But I will try to enjoy it, which means go as fast as I feel comfortable with, bearing in mind it’s my car. It’s maybe a bit different to a car which is just borrowed.”

The Aston Martin driver said that the idea of running Nigel Mansell’s FW14B for the anniversary of the 1992 British Grand Prix was his own. He bought the Williams for more than £2.7m at the Bonham’s auction at Goodwood in 2019.

The fact that it bears a red number five on its nose, he said, is significant to him personally.

“Obviously I’ve got the number five on my [Aston Martin AMR22 F1] car, I won my first championship [driving for Red Bull] with the red five, even if it was a little bit smaller on our car back then, but still it was number five. I was wearing number five in karting, and I’m having number five now, so there’s a link there.

“I think the early nineties is the first memories I have from Formula One, that car and the years after. It was my idea, my initiative, and I thought exactly 30 years after it won the championship, but it also won the British Grand Prix 30 years ago, it’s a great idea.

“It was an incredible opportunity to get a hold of the car and not just put it somewhere where it sits and it’s sort of dead, but to bring it out and make sure it’s still alive, it still has a heartbeat and still runs.”

Vettel is a committed environmentalist who spent some time after last year’s British Grand Prix picking up litter from the grandstands, and visits schools to talk about the issue, including yesterday. He also spoke about the impact of F1 on the planet as part of the BBC Question Time panel recently.

The German said that although the synthetic fuel he will be using is much greener, it makes no difference to how the high-revving Renault engine performs.

“In terms of the fuel actually, it was some effort to even find the fuel, but once we found it, it was actually very easy, it only took one shakedown to get on top of it.”

The Formula One world championship will also switch to running carbon-neutral synthetic e-fuels in 2026. Unlike bio-fuels which are made from plant-based ethanol, synthetic fuels are created by combining hydrogen and carbon to create a combustible hydrocarbon which can be used without any significant modifications in an internal combustion engine.

Although synthetic fuels do create carbon emissions at point of use, they’re theoretically some 85% lower than those of petrol or diesel given that they can be produced using entirely renewable energy.

Porsche is currently investing heavily in the technology, recently taking a 12.5% stake in a Chilean e-fuels company which, when its plant in Chile is up and running, will use a wind-powered electrolysis process to separate the hydrogen from water as well as a methanol synthesis reactor to extract carbon from the atmosphere to create the other key constituent of the fuel.

As well as being involved in the production of the fuel itself, Porsche is planning to re-enter Formula One in 2026 as an engine-supplier, most likely to the Red Bull Racing team meaning that it will have more know-how than most when it comes to designing engines around the fuel that’s set to be used.

Environmentally-friendly though synthetic fuels may be, they’re still very costly, something else to which Vettel alluded.

“The technology is already out there and it’s something we need to focus on more and more, especially for motorsport. I think it can have a future and for other forms of transportation to bridge to the future.

“And then of course, the interesting bit is: how much is a litre of fuel? Now currently we are paying over two euros at the pump, and it’s just about double that. It’s just under six euros (£5.20) for one litre.”

“Given that we are so much at the beginning, I think it’s a great way to show that it’s possible, to show the people that the sound is there, the heartbeat is there. The old Renault engine… a lot of people from Renault helped as well and it’s very exciting to have it running and to see and hear it on Sunday.”