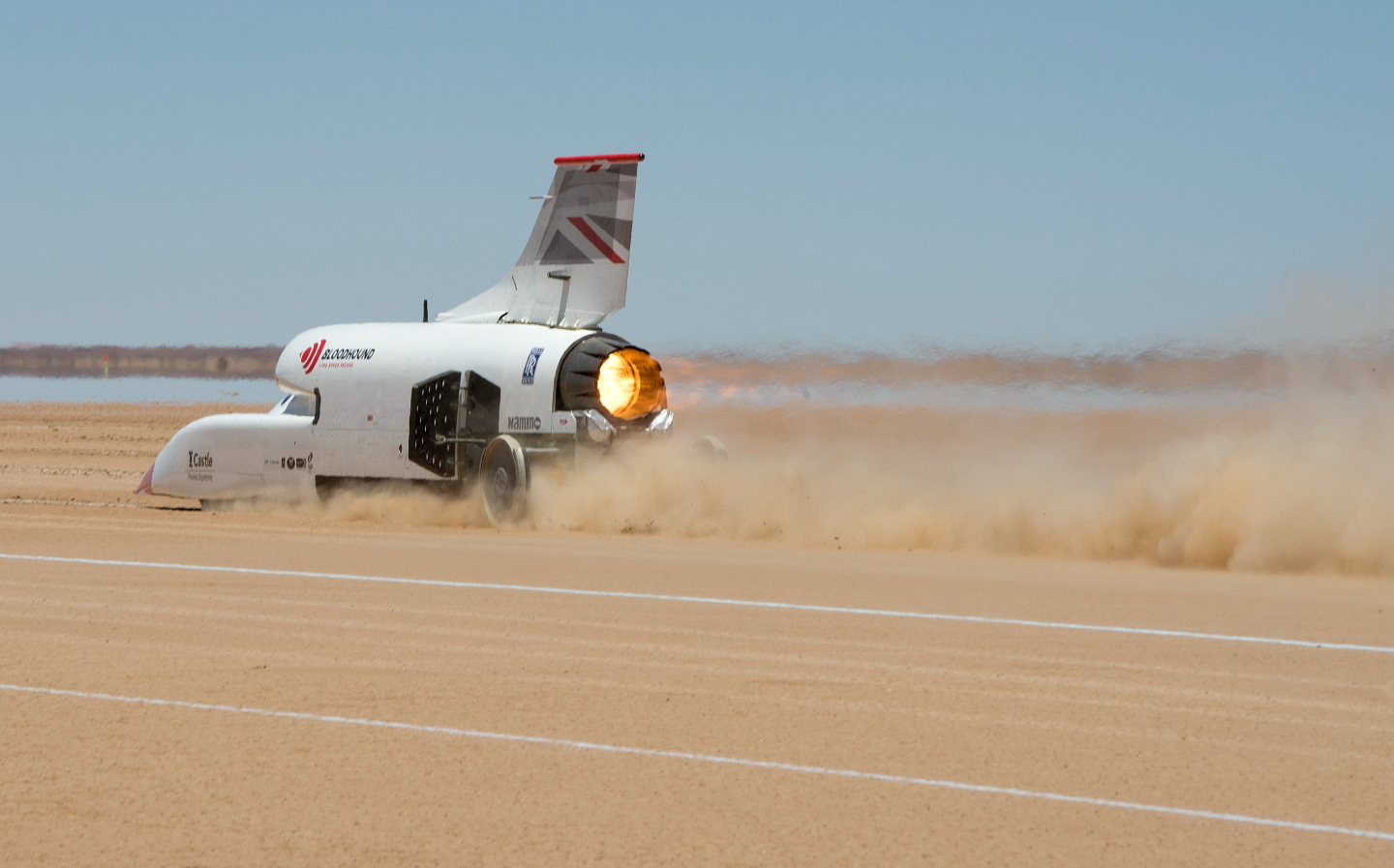 They say a cat has nine lives but one dog is proving just as resistant to death: the Bloodhound LSR project is still “very much alive”, according to its new CEO, and a new land speed record could be achieved very quickly if a new investor is found. What’s more, it would be net carbon zero.

Speaking exclusively to Driving.co.uk at the Goodwood Festival of Speed, Wing Commander Stuart Edmondson, who was head of engineering operations before being “handed the keys” to the project at the start of the year, said Bloodhound is ready and waiting for a new land speed record attempt with a one-time investment.

“We don’t need a billionaire, we just need a wealthy investor” he said. “£10 million — that is the figure that people need to focus on. You can have 11 million in the bank, then you can afford it.”

Bloodhound has been in development since 2008, when it was known as Bloodhound SSC (supersonic car), pictured above. The design incorporates a Rolls-Royce jet engine that takes it up to over 600mph before a rocket engine is fired up to accelerate the vehicle well beyond the current land speed record of 763mph.

The car, which currently resides at Coventry Transport Museum, is still available for use, and the EJ200 jet engine, Nammo rocket and pilot Andy Green, who holds the current world land speed record, are all also ready to go, once investment is found, according to Edmondson (pictured below at Goodwood). Costs of keeping the assets “on ice” are minimal, he said.

In terms of target speeds, Edmondson confirmed that the original goal of 1,000mph is still a “Plan B” but Bloodhound would initially be aiming for 850mph.

“In theory the car is designed for 1,000mph,” he said. “The reality is we need to, as Bloodhound has always done, do everything incrementally.”

“We came away from that knowing comfortably that we can break the land speed record. We didn’t go there to go and explore 1,000 miles per hour. However, there can be absolutely a Plan B.”

However, the project has now taken on a new, environmental spin, according to Edmondson, and will be achieved as net carbon zero.

“As an engineer, I think the challenge is awesome,” he said. “But I’ve also realised we’ve got to distance ourselves from the image we have, quite rightly, that burning fossil fuels is not appropriate to the era we live in.

“So I’m doing it for three reasons: it’s the right thing to do, the engineering challenge, but also to increase the attractiveness of any investor. We have had investors turn away and go, ‘I can’t be associated with that. I’ve got lots of money, but that’s not green’.”

Edmondson, who insisted on taking over the CEO role from millionaire Ian Warhurst in January, rather than allowing Bloodhound to be liquidated, believes a net carbon zero land speed record would also attract renewed interest from the public.

Edmondson was keen to clarify that Bloodhound wouldn’t be using biofuels to power the jet engine, which come with their own environmental issues such as deforestation and mass crop farming, but synthetic e-fuels, such as those being developed by the likes of Porsche, using renewable processes to create a hydrogen and methanol-based liquid fuel. The process is potentially completely carbon neutral.

“This is where I think the planet should go to solve the aviation industries problem, which is aviation industry cannot replace the jet engines they have in the next 10, 20, 30, 40 years,” said Edmondson. “Your Airbus 330 is not going to be powered by a different type of engine. The only way you’re going meet your green deadlines is to provide fuel that is net zero.”

The educational aspect of the project has also been important to the Bloodhound engineers, who have been involved with schools as part of their STEM (science, technology, engineering and maths) lessons.

“STEM is my biggie,” said Edmondson. “Pushing the science, technology and maths comes back to the idea that engineers have got to fix the green problems of today. People can say we’re going to go green, but who’s going to do it? Engineers are going to fix it. And who’s leading that?”

In a post to the Bloodhound website, Edmondson said: “Utilising green fuels strengthens our ability to inspire the next generation of Engineers and create a lasting legacy, as the world pushes engineering boundaries in a sustainable way.”