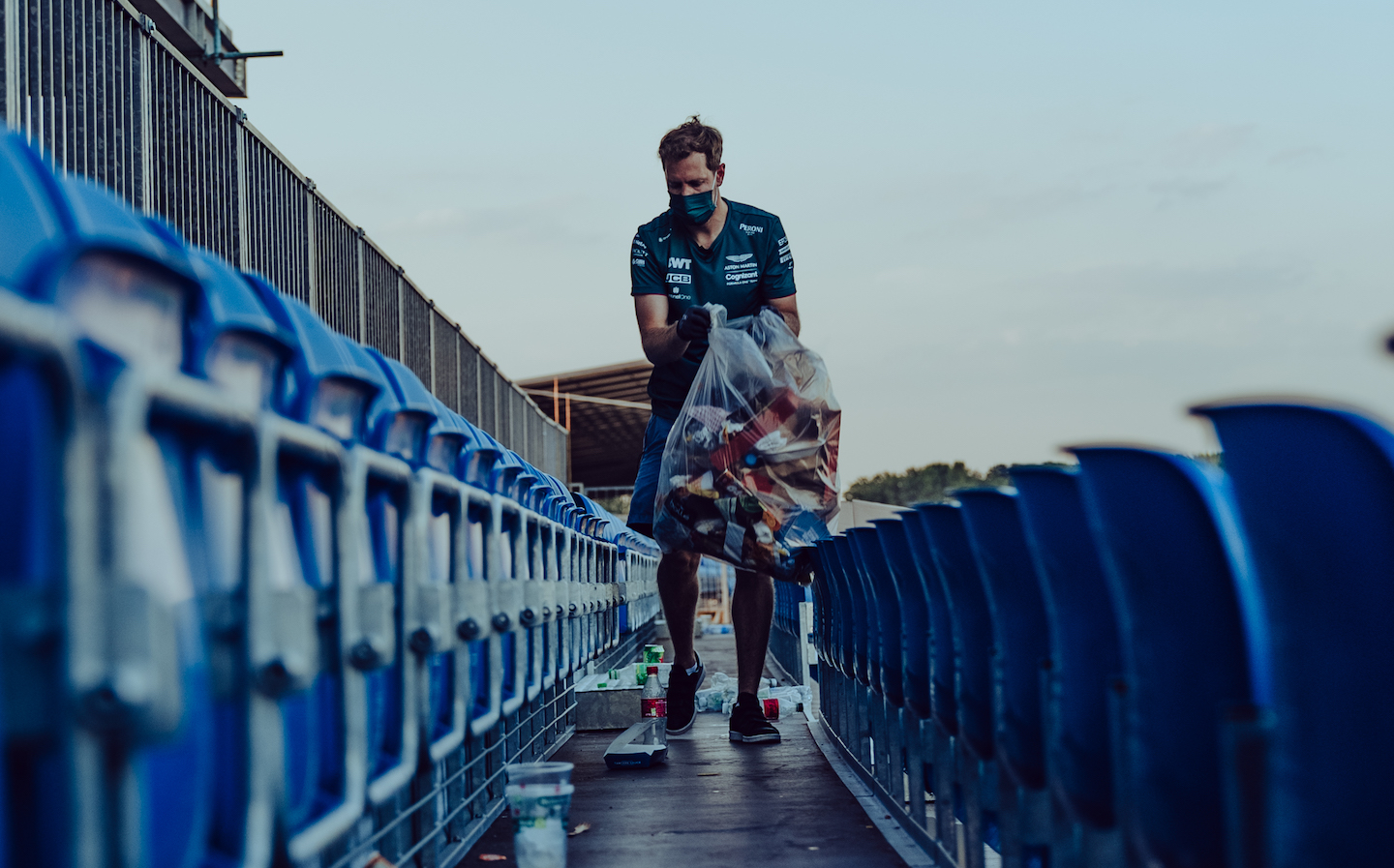 DESPITE AN early retirement from the 2021 British Grand Prix, Aston Martin driver Sebastian Vettel stuck around until after the race and took to the stands to help clean up the litter left behind by spectators.

As the 140,000 fans made their way home following the race, the four-times F1 world champion got to work with a team of people to collect litter from the Silverstone grandstands. He filled multiple bags of rubbish that spectators had left behind on the floors of the stand on the Hamilton Straight.

As he helped the Silverstone crews clean up, Vettel said: “I think it is important that we all respect the environment and don’t rely on other people to clear up after us. We have to start somewhere and each one of us can make a difference now.”

He revealed that his altruistic compulsion stemmed a visit to the Aston Martin F1 team’s factory, close to the Northamptonshire circuit, during the winter. He frequently saw lots of plastic bags in hedges, coffee cups and fast food boxes discarded on the roadside and began to discuss ways of tackling it.

The German driver has actively been discussing with F1 management how the sport can work harder to reduce its impact on the planet.

F1 impact on the environment is not insignificant, not just from the the fuel used by the cars but also the teams at their factories, and the impact of flying teams and their freight around the world to each of the races.

But the sport is taking steps to improve it image. The current hybrid V6 F1 power unit is thought to produce more power than the V8 versions used in 2013, but use a third less fuel per lap. This technology, it is claimed, is trickling down to road cars.

Announcing a plan to ensure F1 has a net-zero carbon footprint by the end of 2019, Chase Carey, chairman, and CEO of Formula 1, said: “Few people know that the current F1 hybrid power unit is the most efficient in the world, delivering more power using less fuel, and hence CO2, than any other car.

“We believe F1 can continue to be a leader for the auto industry and work with the energy and automotive sector to deliver the world’s first net zero carbon hybrid internal combustion engine that hugely reduces carbon emissions around the world.”

In 2022, completely-redesigned F1 cars will be introduced that use the same hybrid power units but will run on fuel with 10% ethanol, double the amount used today. “Crucially,” reported F1.com, “that ethanol must be a second generation biofuel made in a sustainable way, meaning it will have a near-zero carbon footprint.” 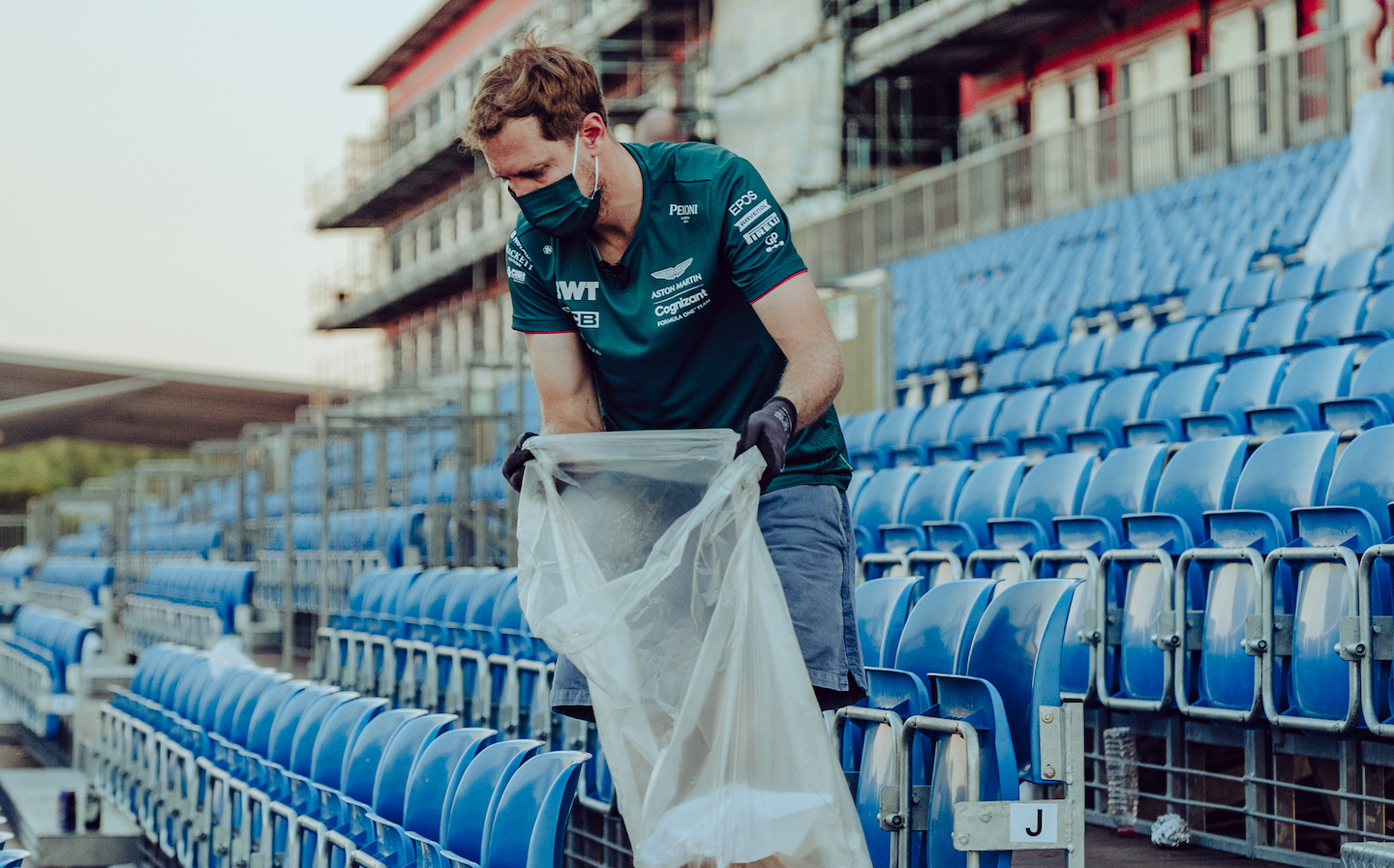 In addition to leading the Aston Martin F1 team, the German driver has been leading an environmental awareness campaign for greater sustainability. Unlike many of the other drivers who continue to travel to and from the circuit in sponsors’ cars, Vettel opted for pedal power over the race weekend.

During the lead-up to the British Grand Prix, Vettel visited a local school to see how the future generation is learning about sustainability and the environment. He told the children that he has changed his lifestyle at home and switched to renewable energy.

Vettel showed interest in how the school was learning about sustainability and told of an initiative he has been involved with in Austria to create bee hotels, whereby small packages were sent to schools to encourage children to build new homes for the insects to settle in and thrive. Vettel even helped one school build a massive bee hotel in the shape of an F1 car in a newly planted meadow.

During the delayed start to the 2020 season, Vettel completed an internship in organic farming to learn more about agriculture. When asked why he did it, Vettel said: “At some point you realise that not every vegetable is the same, not every apple has the same nutrients, and then you ask why.

“Then you realise very quickly where the apple comes from and how it is grown — and that’s how the doors opened for me. The theory interests me and I read about it a lot. But to learn more from the practical side and talk to the people who deal with it on a day-to-day basis, that was very interesting.”