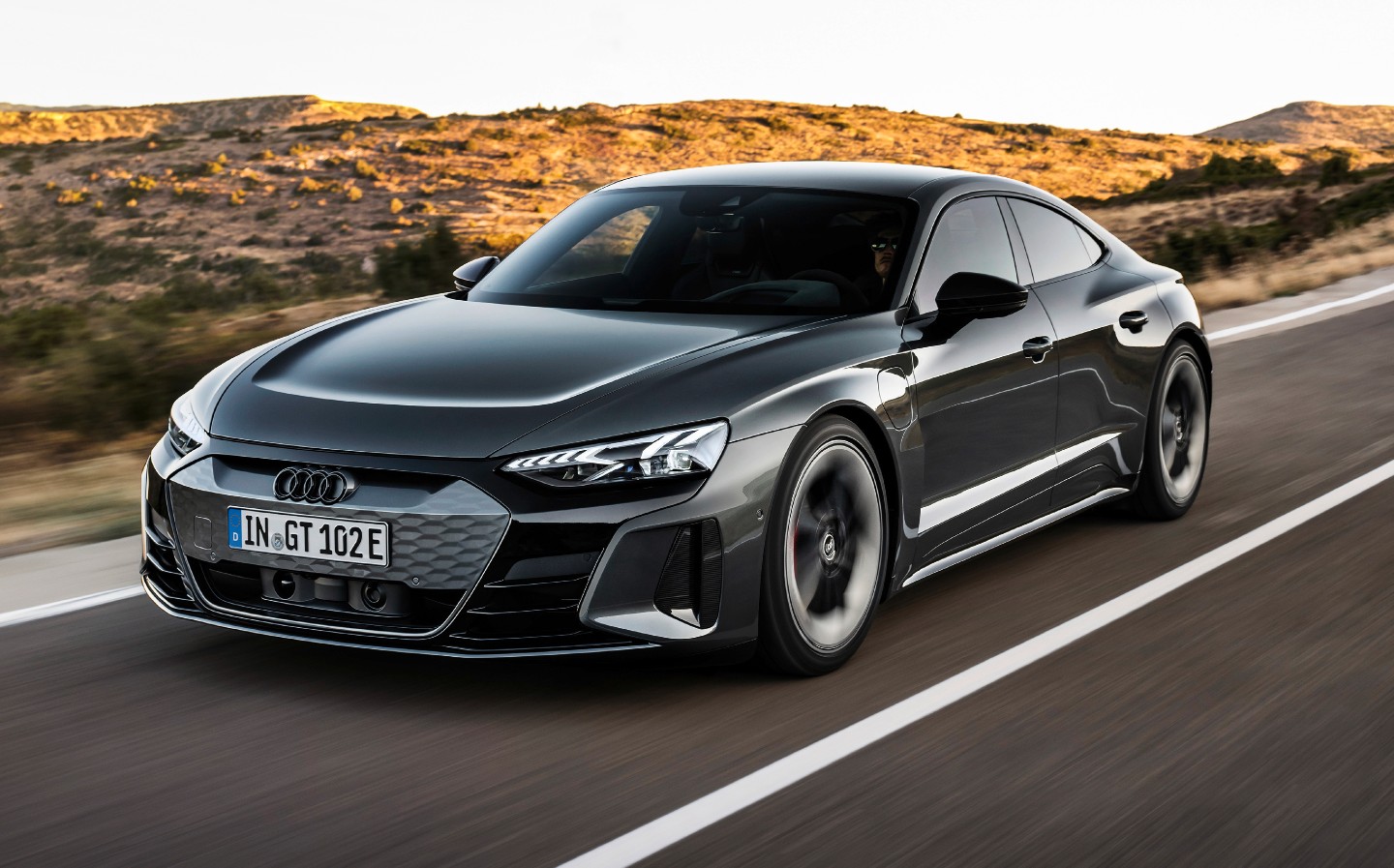 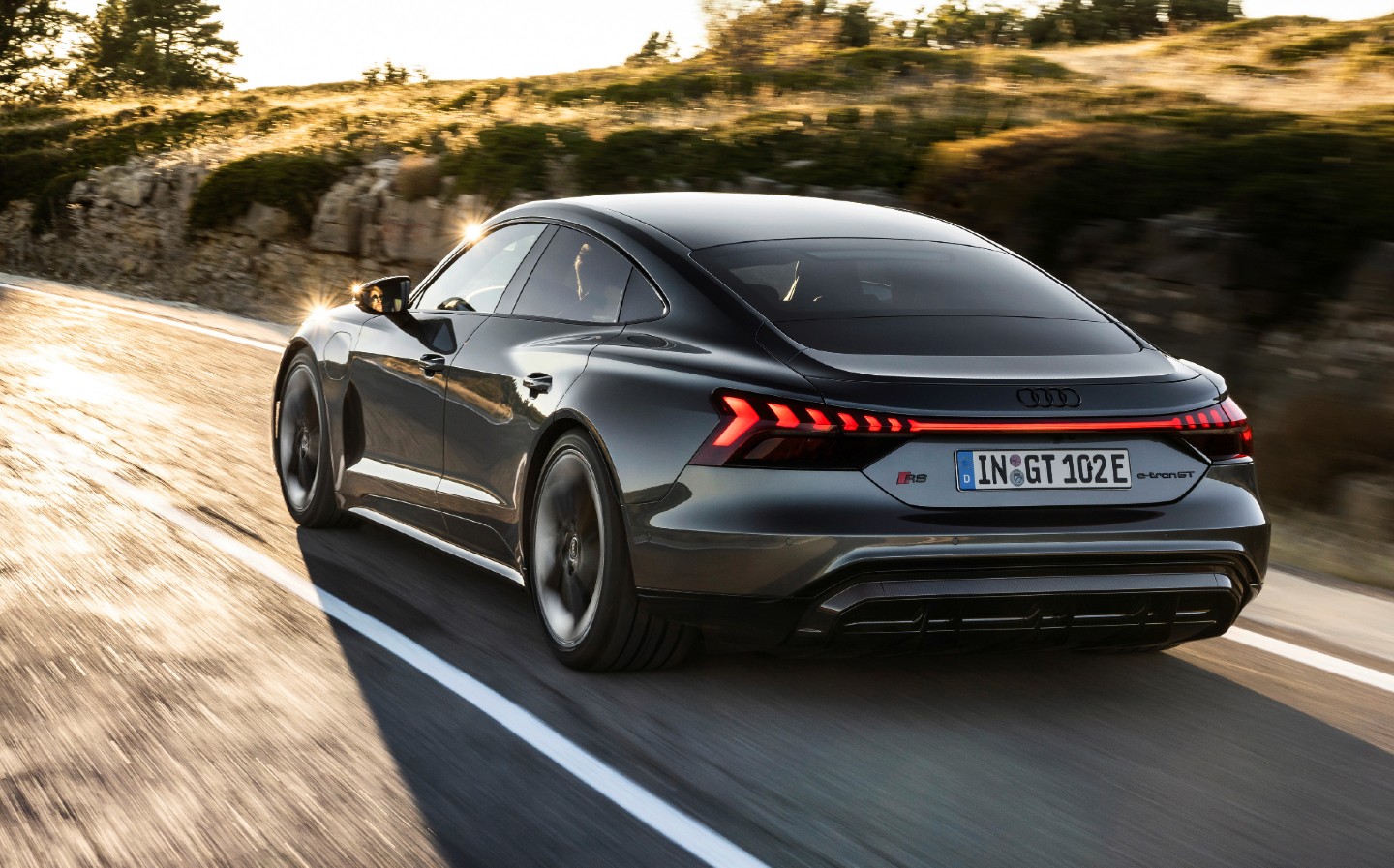 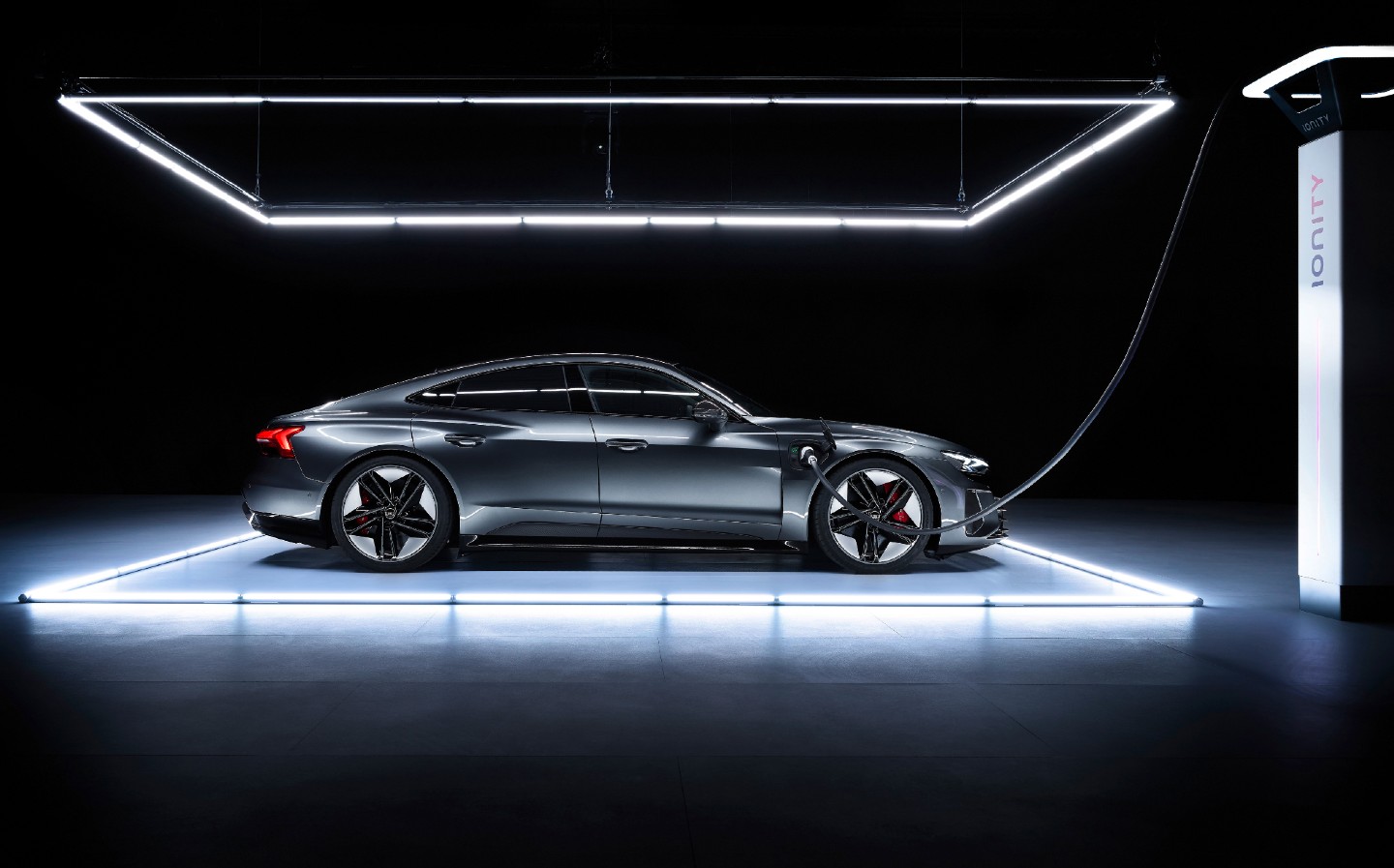 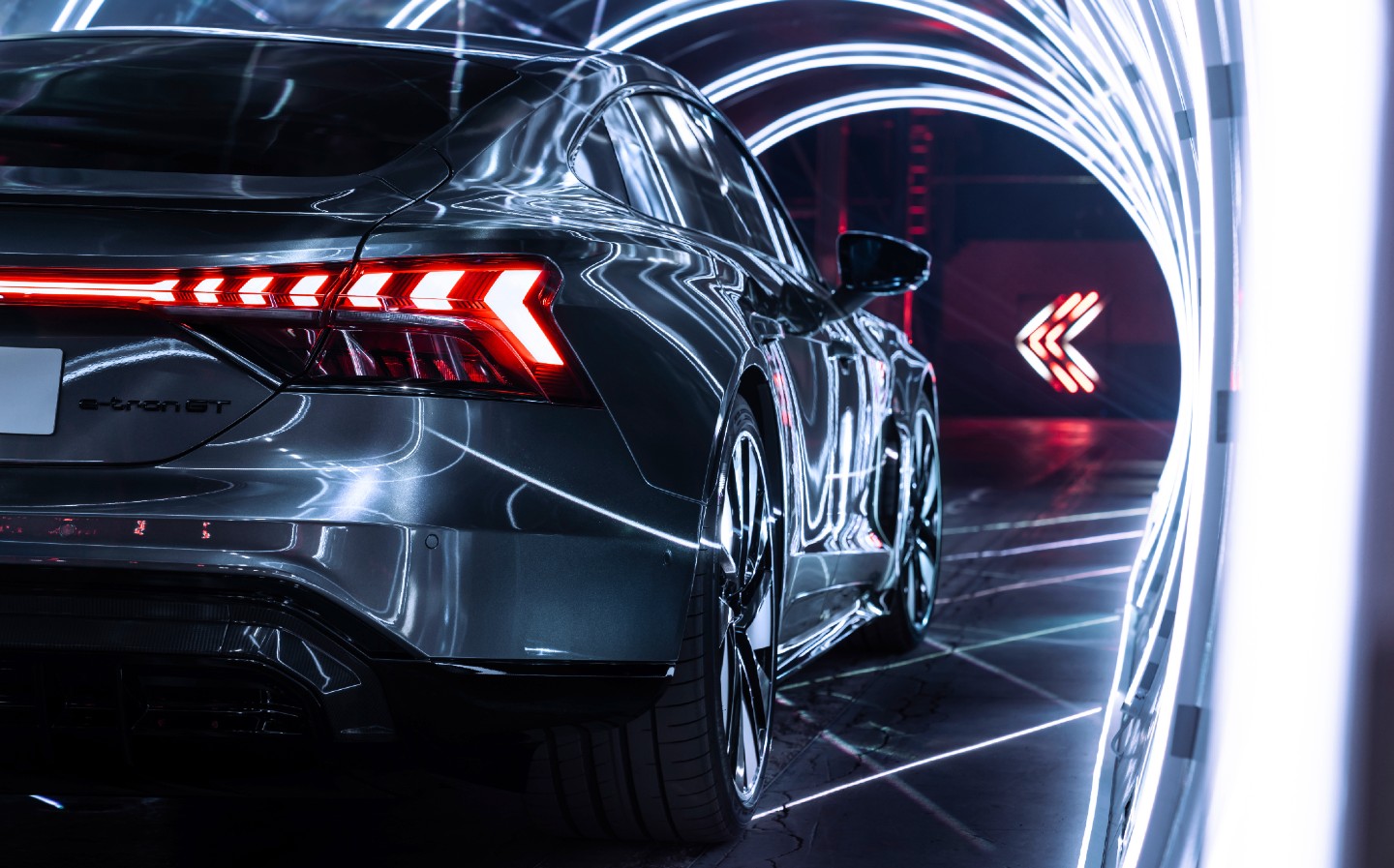 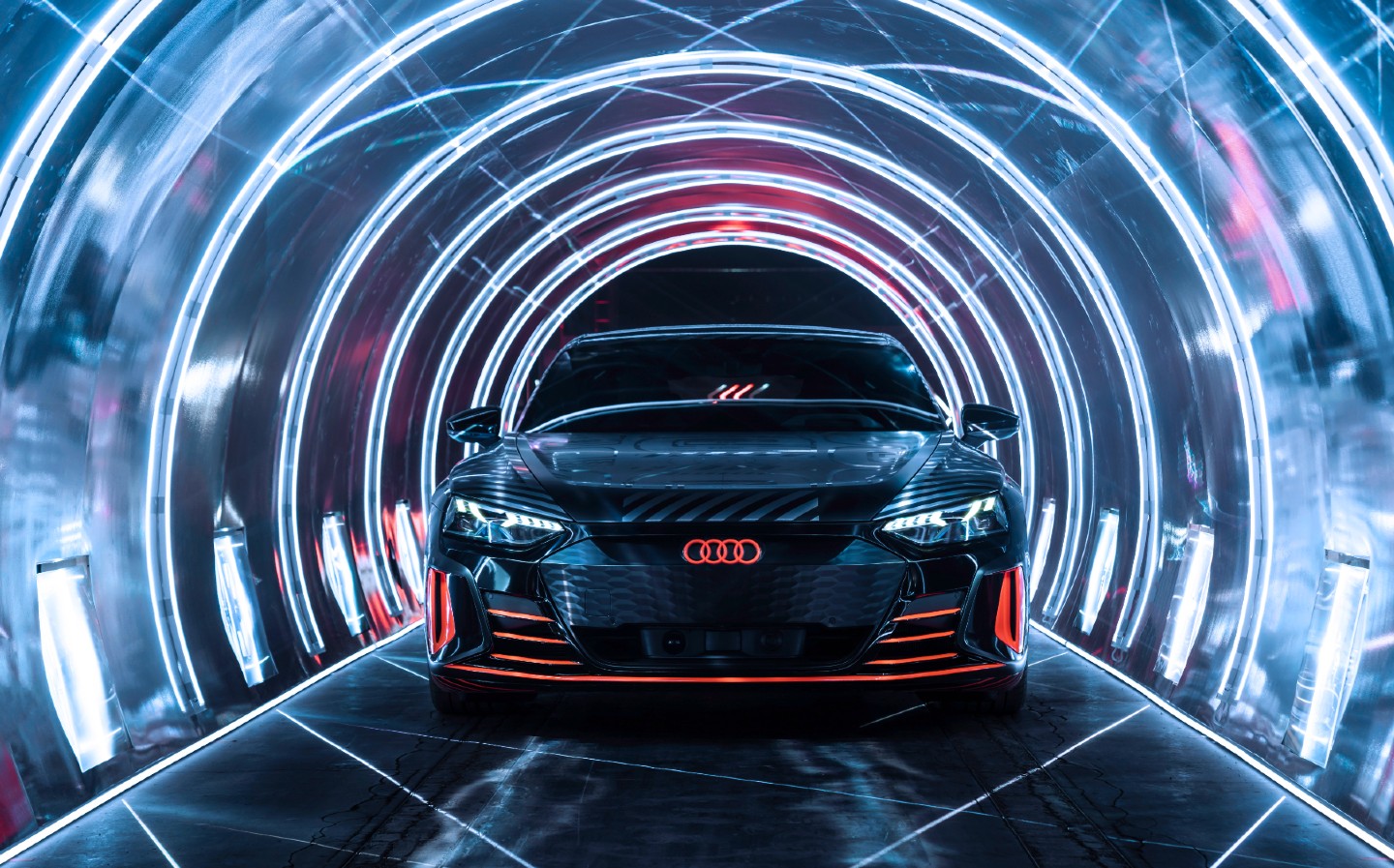 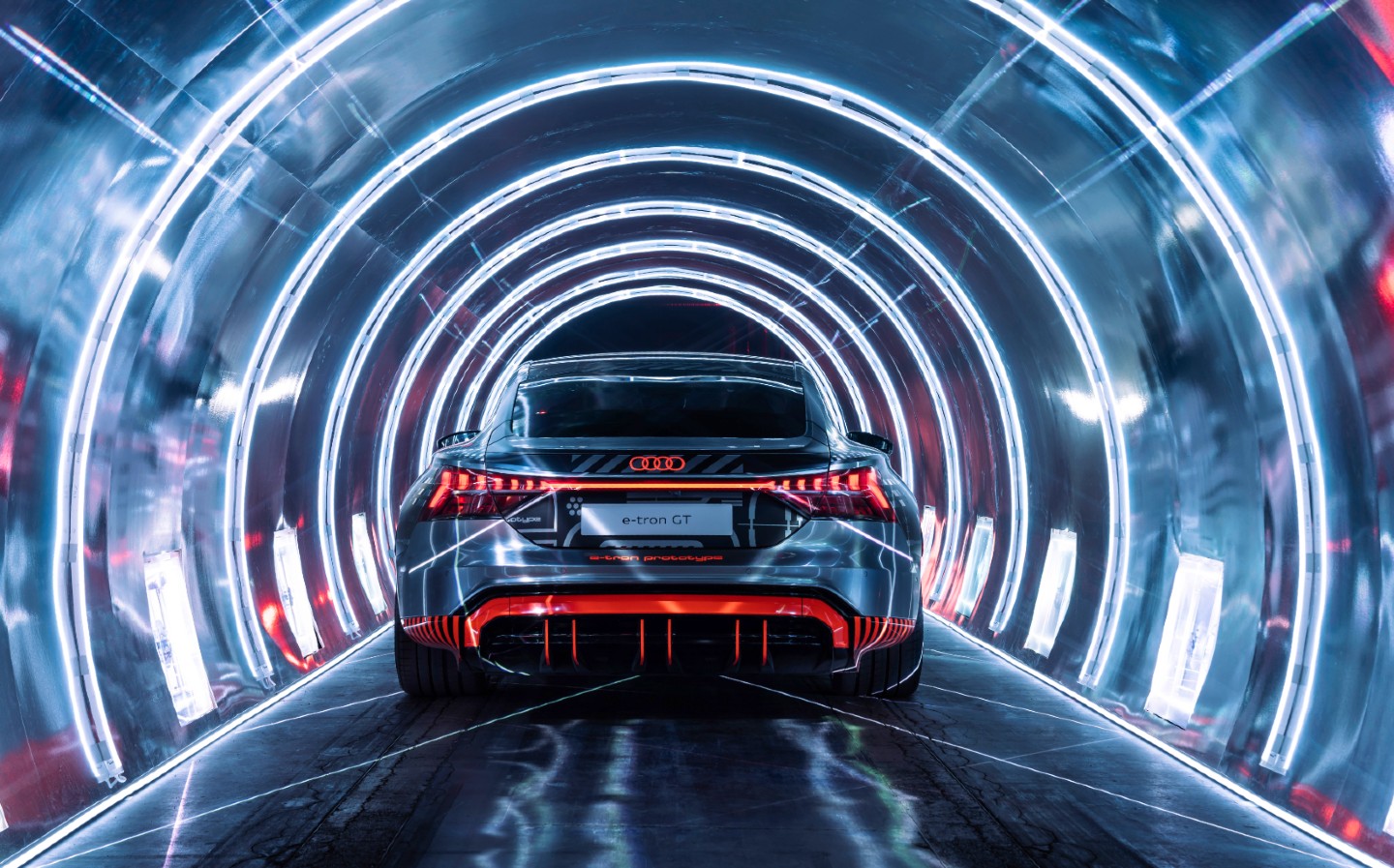 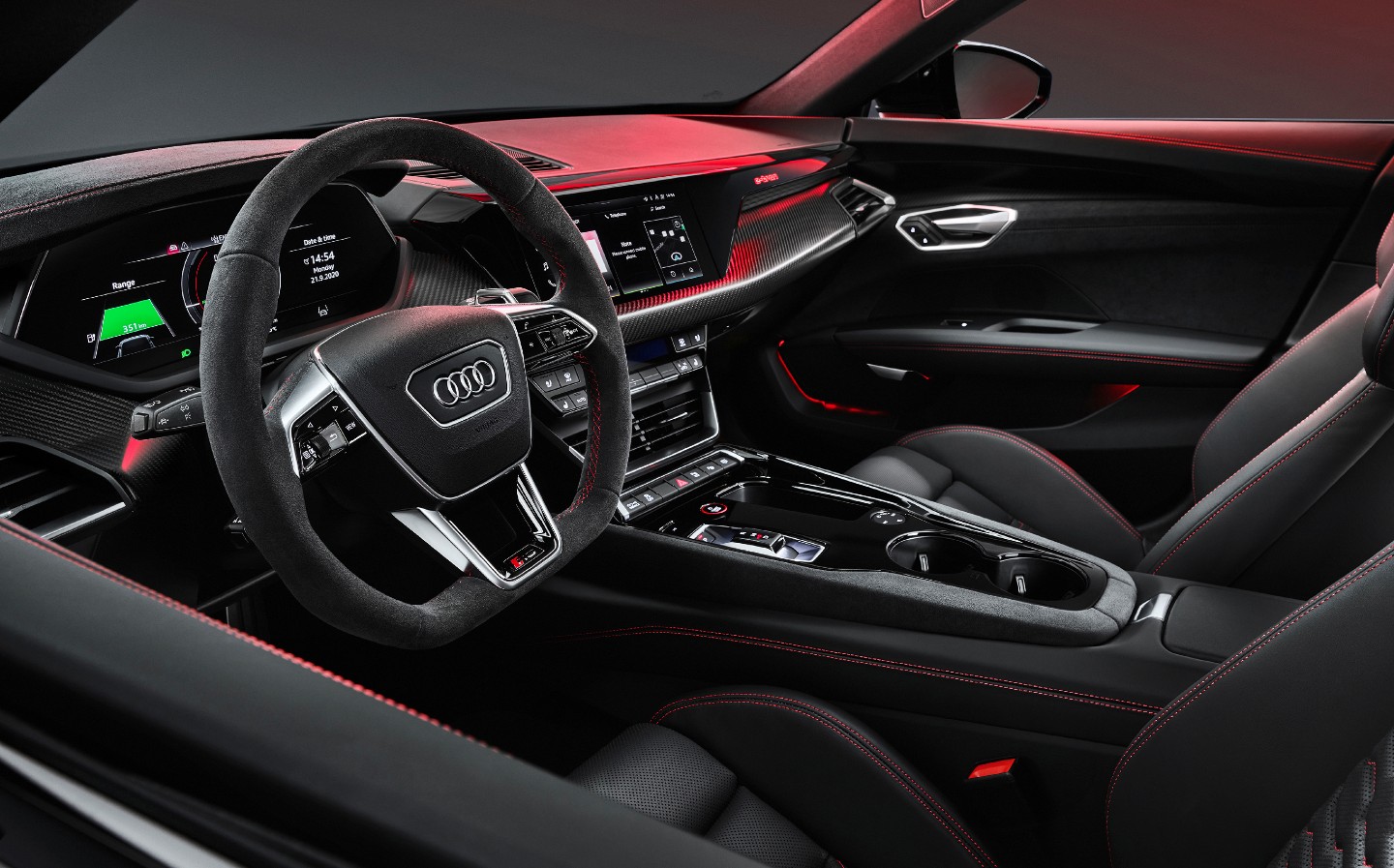 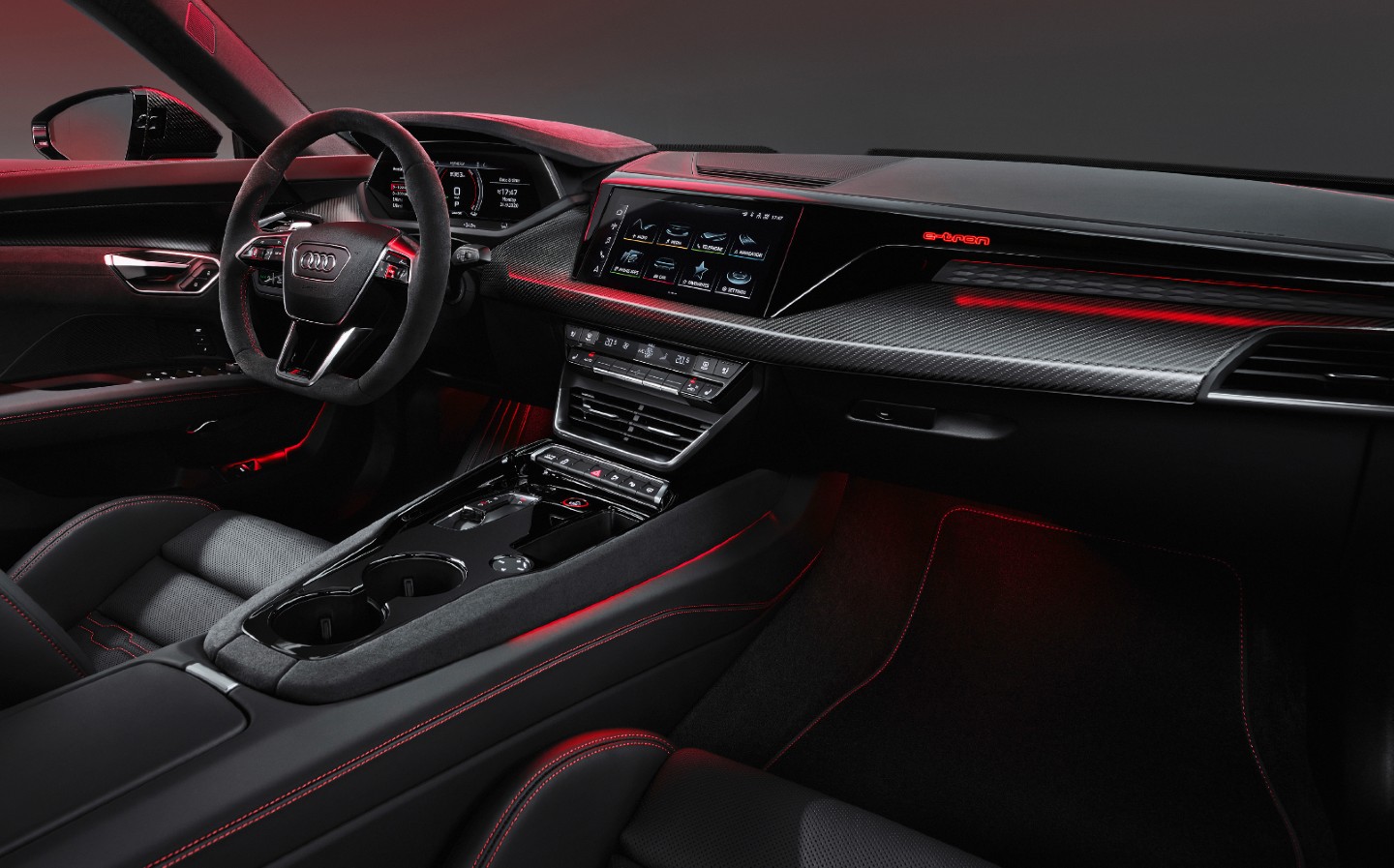 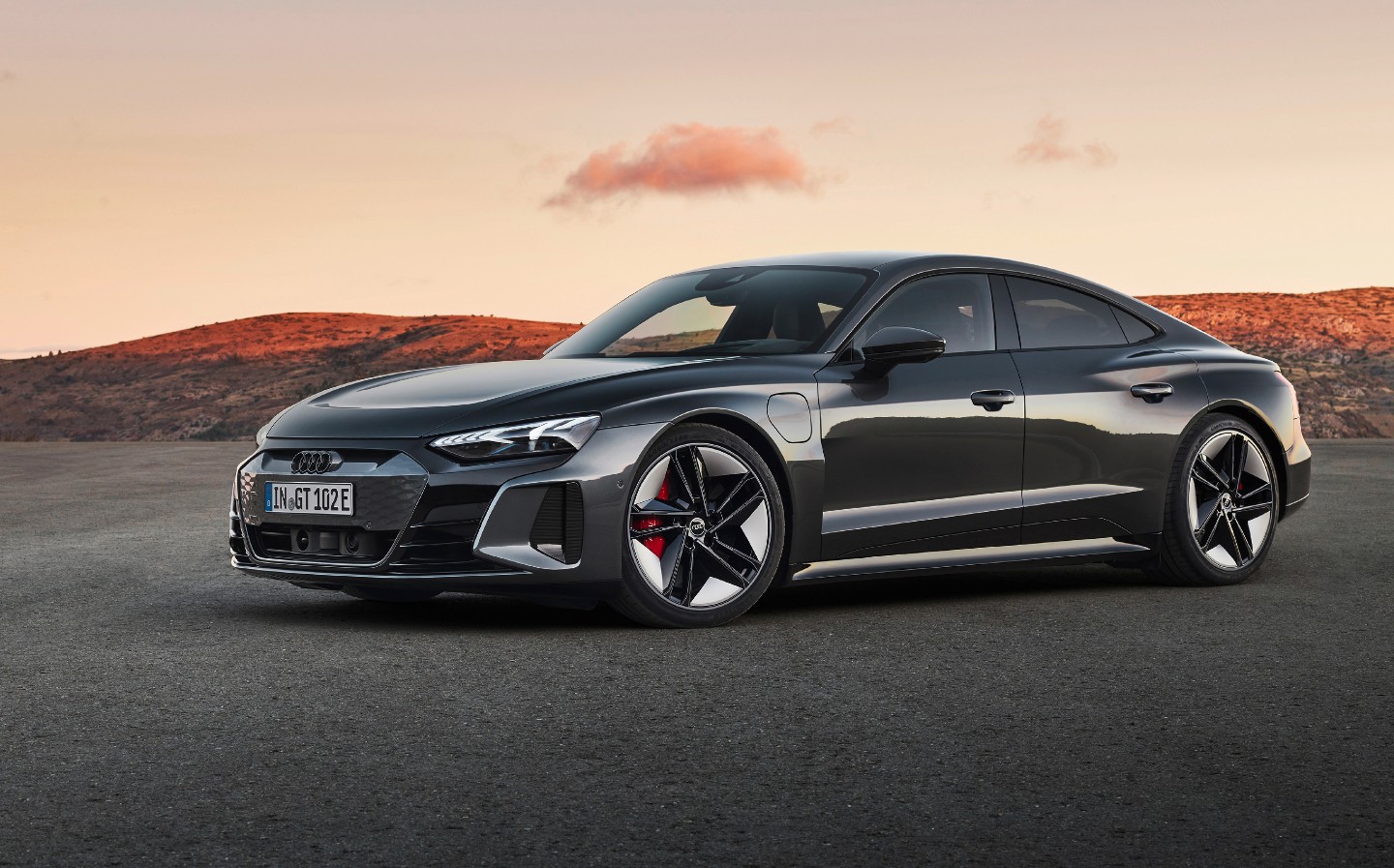 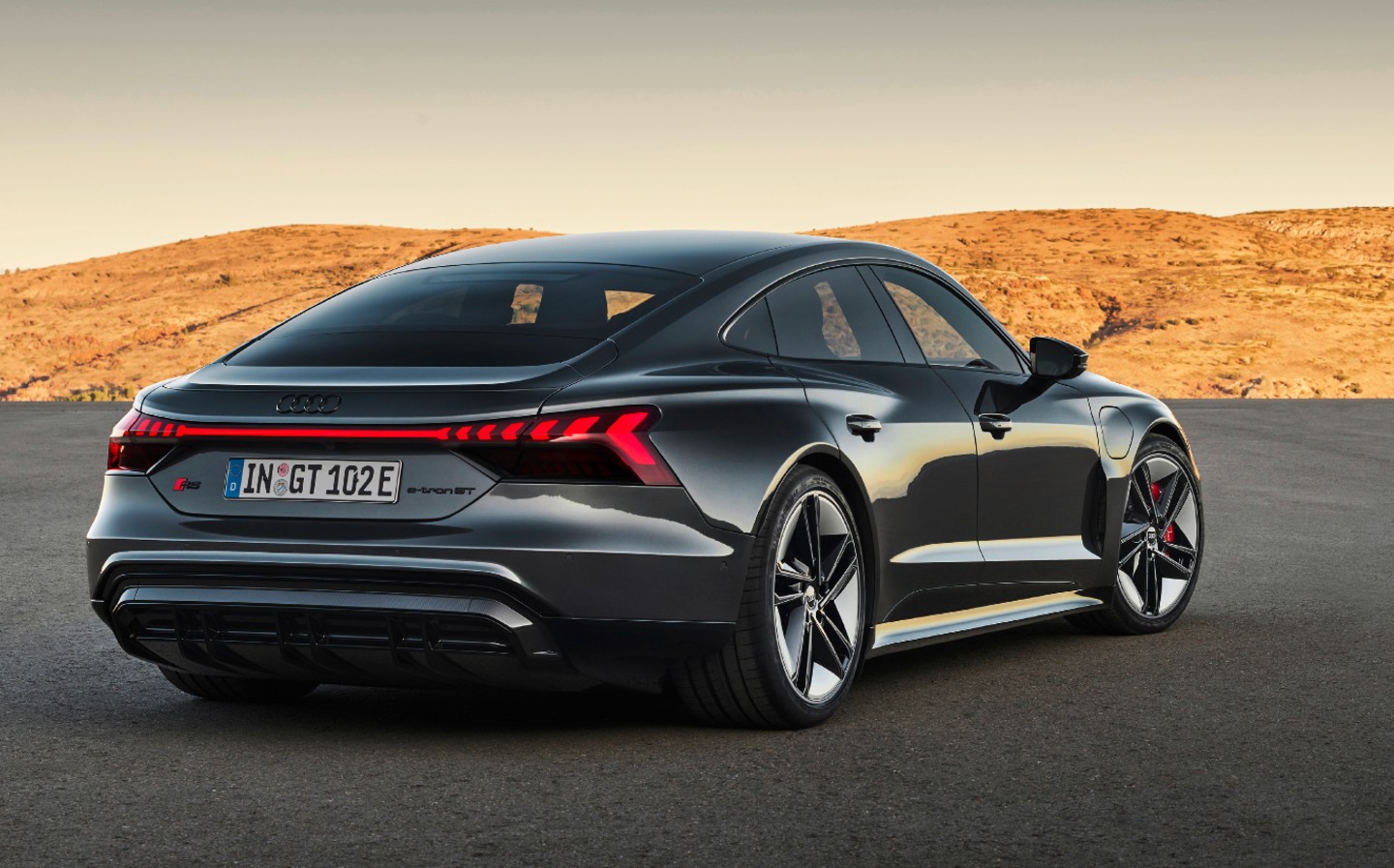 THE NEW Audi e-tron GT has been revealed in both standard grand tourer and sporty RS forms, offering both blistering performance and comfortable long-range cruising.

The e-tron GT is the flagship of an electric vehicle offensive from Audi that will see 20 pure-electric models introduced by 2025, with the e-tron S, e-tron S Sportback and Q4 e-tron also due for launch this year. Ten plug-in hybrids will also be available from the brand in four years’ time.

Pitched by chairman Markus Duesmann as “the perfect blend of comfort and sportiness”, the 2021 Audi e-tron GT is the German brand’s new flagship electric car and the first to feature a “flat-bottom architecture”, with a battery pack under the floor between the front and rear wheels – a design pioneered by electric car market disruptor Tesla.

This layout means the centre of gravity is extremely low – lower than in the Audi R8 supercar, the company says – and maximises interior space. Four adults should be able to travel comfortably, with headroom enhanced by a low seating position. In the rear, legroom is improved thanks to a cut-out in the battery pack resulting in a deeper footwell – something Audi has dubbed a “foot garage”. 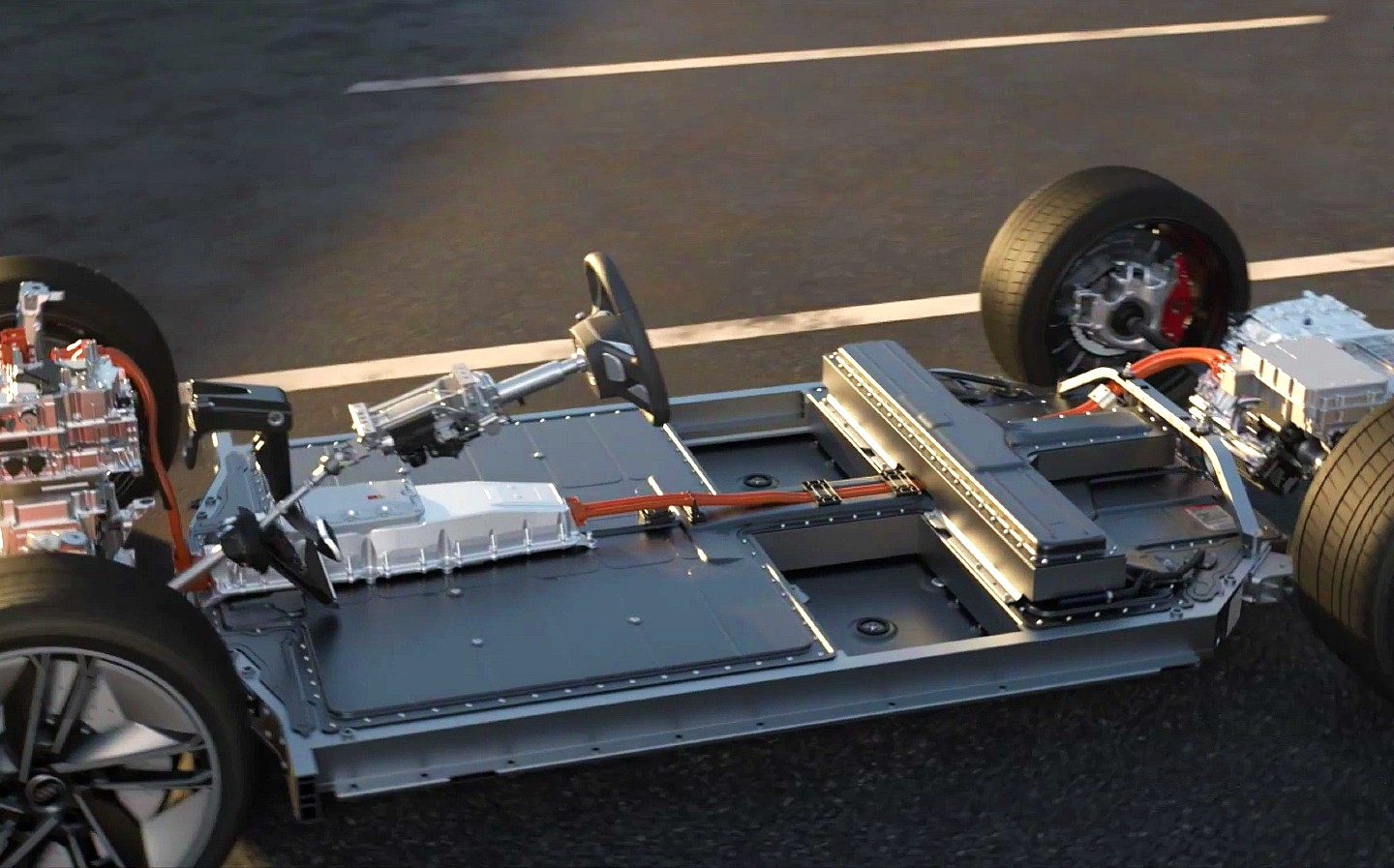 All GTs need decent luggage capacity, and trips away in the Audi are aided by the combination of a 405-litre boot and an additional front luggage area under the bonnet of 85 litres.

The cabin features only recycled materials and alternatives to leather have been used for the trim, including seats made from former plastic bottles.

The infotainment screen and “monoposto” dashboard design are angled towards the driver, with two horizontal layers capped at each end by air vents that flow into the doors, to add the feeling of depth and width.

Three-chamber air suspension (a first for Audi) and electronically-controlled dampers mean the car can be tuned for firm, sporty set-up or a more comfortable mode for cruising, and can lowered automatically at high speed by up to 22mm, to reduce drag.

All-wheel steering also means a tighter turning circle at low speeds as well as extra stability at high speeds, while the dual-motor quattro four-wheel drive system distributes power between the front and rear axles, as well as between the individual wheels thanks to a variable multi-plate clutch and electronic control system.

In most conditions, the electric all-wheel drive will distribute power evenly between the front and rear wheels, but when “efficiency” mode is activated, front-wheel-drive is prioritised. The e-tron GT’s quattro system reacts five times quicker than quattro on a traditional combustion engine model, Audi says.

Three types of brake are available: standard steel discs; optional tungsten carbide brakes, available with red or orange callipers, which use a disc nearly as hard as diamond that reduces brake dust by almost 90% and increases the disc durability by 30%; or full carbon ceramic brakes, for ultimate stopping power.

With dual electric motors mounted between the wheels at the front (175kW) and rear (320kw, or 335kW on the RS model), producing up to 523bhp and 472 lb ft of torque, 0-62mph in the Audi e-tron GT quattro takes 4.1 seconds using “boost” mode, while the 637bhp and 612 lb ft of the RS e-tron GT can manage the same sprint in just 3.3 seconds. The latter is the most powerful series production car Audi has ever created.

By comparison, sister company Porsche’s Taycan 4S and Taycan Turbo, which are based on the same underpinnings and are reported to share around 60% of the same componentry, can achieve 0-62mph in 4.0sec and 3.2sec respectively, while the Taycan Turbo S is four tenths of a second quicker still.

But while acceleration times are impressive, many buyers will be more interested in the range of the Audi e-tron GT and RS e-tron GT between charges.

Both Audis feature the same 93.4kWh (85.7kWh net) battery pack, though the standard model is officially rated at between 268 and 303 miles (WLTP), depending on the wheels fitted, while the higher performance RS’s wings are clipped a little in terms of the distance it can travel, with a potential of 267-293 miles available from the battery.

This compares favourably with the Porsche, which has a range of up to 280 miles per charge (combined), but Tesla claims a range of 412 miles for its similarly-priced Model S Long Range.

There are three predictive modes for energy recuperation: automatic, which predicts how much regen to apply based on the navigation route and distance to junctions, or the vehicle in front; via Drive select, with modes for Efficiency, Comfort and Dynamic; or via paddles on the steering wheel to switch between two regen strengths.

Both cars take an AC charge at up to 22kW, with ports handily located just behind the front wheels on both sides of the car, while the right-hand port can take a DC rapid charge at up to 270kW, resulting in recharges from 5-80% in just over five hours or 22.5 minutes respectively. At full speed, the e-tron GT can receive 62 miles of charge in just five minutes.

All three packs are standard as part of the e-tron GT Vorsprung and RS e-tron GT Carbon Vorsprung, which also add a night vision assistant and a head-up display.

Audi has also included a remote parking system that allows the car to be manoeuvred in or out of a parallel or bay parking space using the myAudi smartphone app, without the need to be seated in the car. The car moves slowly into position while a button is held down, and once parked can be switched off and locked remotely, too.

The new Audi e-tron GT is being built in Germany at Audi’s Böllinger Höfe factory in Neckarsulm, on the same small-series production line that also assembles the petrol-powered R8 supercar – possible even though the cars are technically so different.

The factory is carbon-neutral, the company claims – an important consideration for buyers looking to switch to electric – and the new model was introduced to the production line following 3D scanning of the facility and testing in virtual reality, rather than using a physical prototype.

– After reading about how the Audi e-tron GT is taking the fight to Tesla, check out what The Grand Tour script editor Richard Porter had to say about the Audi e-tron Sportback
– It’s possible the Audi R8 and TT could be reborn as pure-electric models, according to reports
– You may also be interested to read that the Renault 4 is set for a comeback as a pure-electric small crossover