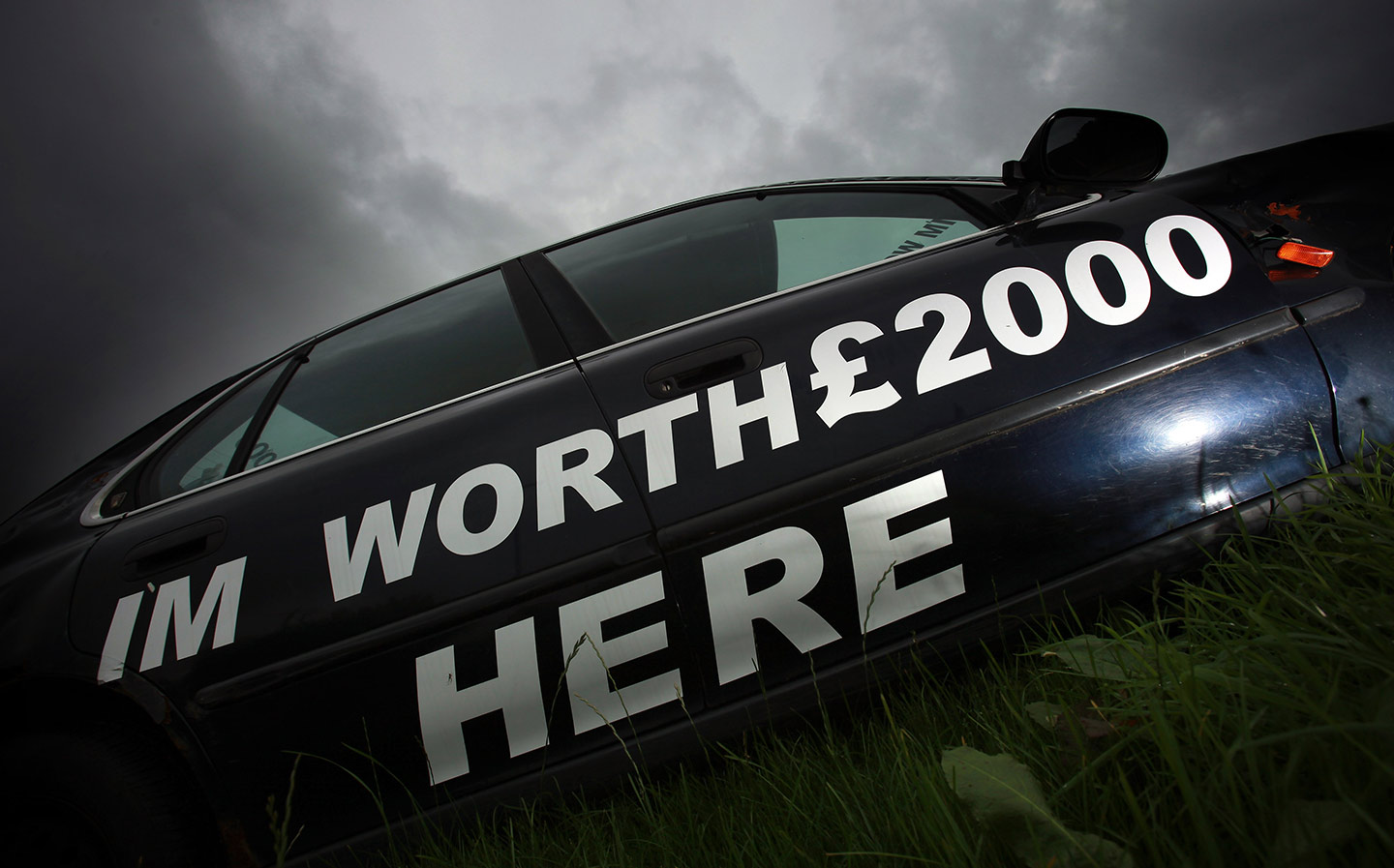 FOLLOWING CONCERNS over air pollution and the government’s announcement that cars powered solely by petrol and diesel engines will be banned from 2040, sales of new cars have slipped into the slow lane. To promote interest, car makers have begun launching their own “scrappage” schemes. These vary in detail but the idea is to offer drivers financial incentives to replace their old, dirty car with a new one that features a much cleaner motor.

Ask the manufacturers and they’ll tell you that they’re doing this because they recognise their responsibility to improve air quality, but some analysts have suggested there’s an ulterior motive. Sales of new cars have dropped year-on-year — by 2.2% for the market overall, in the first half of 2017 versus the same period last year.

Uncertainty around Brexit has been attributed to the slowdown but increasing rhetoric around schemes designed to punish diesel drivers — such as the 2019 London Ultra Low Emission Zone — could be another factor. Less demand for diesel cars contributed overwhelmingly to the slowdown in sales, having slumped by 11% in the first half of 2017 compared with the same period in 2016. In July, diesel sales fell more than 20% below that of June, with total sales down 9.3% month-on-month.

Whatever the reason, the scrappage schemes could be good news for drivers looking for a good deal and who have an old car (registered before 2010) to part-exchange. Some manufacturers only accept diesel-powered cars as part of their scheme, others will take petrol or diesel models, and a strict time limit is applied by all, so drivers should check the terms and conditions.

And remember, buyers can still haggle over the price of the car they’re after, before the scrappage scheme is applied, meaning further discounts are available to those willing to shop around and play dealers off against one another.

It’s also important that you do the sums and make sure you’re getting a better deal than you would with a standard part-exchange, particularly when combined with other offers that may not be available in conjunction with the scrappage deal.

Here’s a round-up of the scrappage schemes available in the UK, in 2017, which we’ll update as new deals are announced.

Some drivers may have thought that a posh brand like Audi wouldn’t have to use a scrappage scheme to attract customers. But in a mass-market arms-race with the likes of BMW, Mercedes and VW, which also all offer scrappage incentives, Audi has stepped up.

For its 2017 scrappage scheme, which runs until the end of the year, Audi starts with a £2,000 minimum part-exchange valuation for any old diesel car, registered before 2010. That is toward the Q2 SUV, but the scheme stretches to a maximum of £8,000 for those who buy a Q7 e-tron hybrid SUV.

The offer applies to trade-in cars with either petrol or diesel engines and registered before 2010. And they must have been owned for at least 180 days. However, drivers must hurry, as the company has set a deadline of the end of this month.

BMW and sister brand Mini call their scrappage schemes a “Lower Emissions Allowance”. It’s one of the least generous, offering just £2000 against the purchase of certain popular BMW and Mini models, which emits 130g of CO2 or less.

These include the 1-series, 2-series and 3-series, as well as the electrically-powered i3, reviewed here.

However, to qualify of the offer, customers must have owned the pre-2011 diesel vehicle for a minimum of one year.

The BMW Lower Emissions Allowance can be used against the following models:

The French car maker is offering scrappage incentives of between £1,600 and £6,400 across of its range. Anyone taking part must have owned their old car for 90 days, and it should be registered before 2011. The offer runs until the end of 2017.

It means that the impossibly cute Fiat 500 enjoys a discount of up to £2,125. The offer applies to trade-in cars with either petrol or diesel engines and registered before 2010. And they must have been owned for at least 180 days.

However, drivers must hurry, as the company has set a deadline of the end of this month.

Even the new, 2017 Fiesta qualifies — reviewed here — with a £2,000 minimum part exchange. For our money, however, a £4,450 saving on a Focus Zetec family hatchback is a seriously good deal on a seriously good car.

Ford is running its scrappage scheme until December 31. It only stipulates that part-exchange cars must have been owned for a minimum of 90 days and it should have been registered before 2010.

Drivers who find the thought of arriving at a showroom in a worn out car and leaving in a discounted new hybrid might be tempted by Hyundai’s scrappage offer. Any pre-2010 car could be exchanged for a minimum of £2,000 toward a new Hyundai Ioniq, a family car that runs on a mix of petrol and battery power and is able to achieve 83mpg.

The rest of the Hyundai range is eligible for scrappage contributions of between £1,500 and £5,000, provided the buyer has owned their part-exchange vehicle for 90 days. It finishes at the end of the year.

For Jeep, the offer only applies to the Renegade, with £3,500 (inc. VAT) off the list price of any specification you choose.

The Scrappage Bonus is available on any diesel and petrol car that was registered before December 31, 2009, as long as you have owned it for more than 180 days. But hurry, as the scheme only runs until the end of September.

Kia is keeping things simple: only its Picanto city car and Rio supermini are available with a £2,000 scrappage deal. There’s no restriction on the ownership period of the old car, but it must have been registered before 2011.

Eager to see drivers take advantage of scrappage and move on to a more efficient car, Mazda’s incentive is for models with CO2 emissions of under 130g/km. Running until the end of the year, it is open to old petrol or diesel cars registered before 2010, and includes generous incentives of up to £5,000 on popular models including the 3 family hatchback.

Mercedes isn’t being nearly as generous as Audi with its scrappage scheme. The German car maker will offer a £2,000 exchange toward new diesel-powered Mercedes, in return for old diesel cars owned for at least six months and registered before 2010. It calls it a “Changeover Bonus”.

As with owner BMW, Mini calls its scrappage scheme a “Lower Emissions Allowance”. It’s one of the least generous, offering just £2,000 against the purchase of certain popular BMW and Mini models, which emits 130g of CO2 or less.

Mini offers the deal across the range of bodystyles, including the hatch, convertible, Countryman and Clubman. However, to qualify of the offer, customers must have owned the pre-2011 diesel vehicle for a minimum of one year.

Like its sister company, Citroën, Peugeot is using the scrappage scheme to help sell all its cars, rather than only models that fall below a CO2 threshold of 130g/km. That means owners of old cars registered before 2011 can trade them in and get up to £6,000 in return, and it doesn’t matter whether it’s a diesel or petrol.

Contributions ranging from £1,000 to £4,000 are available from Nissan dealers. But these can be combined with other offers, such as a personal contract purchase finance incentive. Our pick of the range would be the new, 2018 Qashqai, which is up to £2,000 cheaper during scrappage season.

Drivers have to exchange a car registered before 2010 that’s been owned for 90 days, but only have until the end of September to take advantage of the offer.

‘Au revoir old car’ says Renault. When the French car maker’s £2,000 scrappage discount is matched by some seriously generous discounts of up to £3,200, it’s likely to emerge as one of the winners of the scrappage season.

Our pick would be the combined saving of £4,000 on the excellent Grand Scenic, the seven-seat family car that Driving has been impressed by during our extended test. However, perhaps the biggest winner is the company’s most affordable car – the Clio supermini, which comes with £4,250 off.

Drivers have until the end of the year to take advantage of these enticing deals. They have to have owned their old, pre-2010 car for a minimum of 90 days.

Seat is enticing drivers with scrappage savings of between £1,500 and £3,500 across its range of hatchbacks and estates, until December 31. That includes a £2,500 deal on the new Ibiza. The offer is open until the end of the year, but is restricted to diesel cars registered before 2010.

As with Audi, Seat and VW, Skoda wants drivers to part-exchange their old diesel, from before 2010, for a shiny new Skoda and they’ll give them between £1,500 and £4,000 in return. It must have been owned for six months, and the offer expires at the end of the year.

As with owner Mercedes, Smart calls its offering a “Diesel changeover bonus”. For Smart that means up to £1,000 off a new pure-electric Smart Fortwo ED, Fortwo Cabrio ED or ForFour ED when you trade-in your old diesel car, with a Euro 1 to Euro 4 engine, before December 31. It doesn’t sound like much but can be added to other offers, which could prove enticing.

You’ll have to hurry to take advantage of Suzuki’s comparatively average scrappage offer, as it finishes at the end of the month. Cars being traded in exchange for a new model must have been owned by the customer for 90 days and should have been registered before 2010. The company adds that its scrappage deal can be combined with other offers on new cars.

It’s unlikely many will be tempted to buy a Land Cruiser diesel, even with a £4,000 scrappage saving, but plenty may be taken with a £2,000 discount on the affordable Aygo city car.

One of the first car companies to bring back scrappage, Vauxhall offers a £2,000 part-exchange that can be combined with other finance deals, but the terms and conditions are quite restrictive and the range of models is not as wide as some rivals.

There are plenty more tempting offers, including up to £6,000 on the Passat GTE plug-in hybrid and Sharan family cars.

VW stipulates that the scrappage car must be diesel and pre-2010, and owned for at least six months.