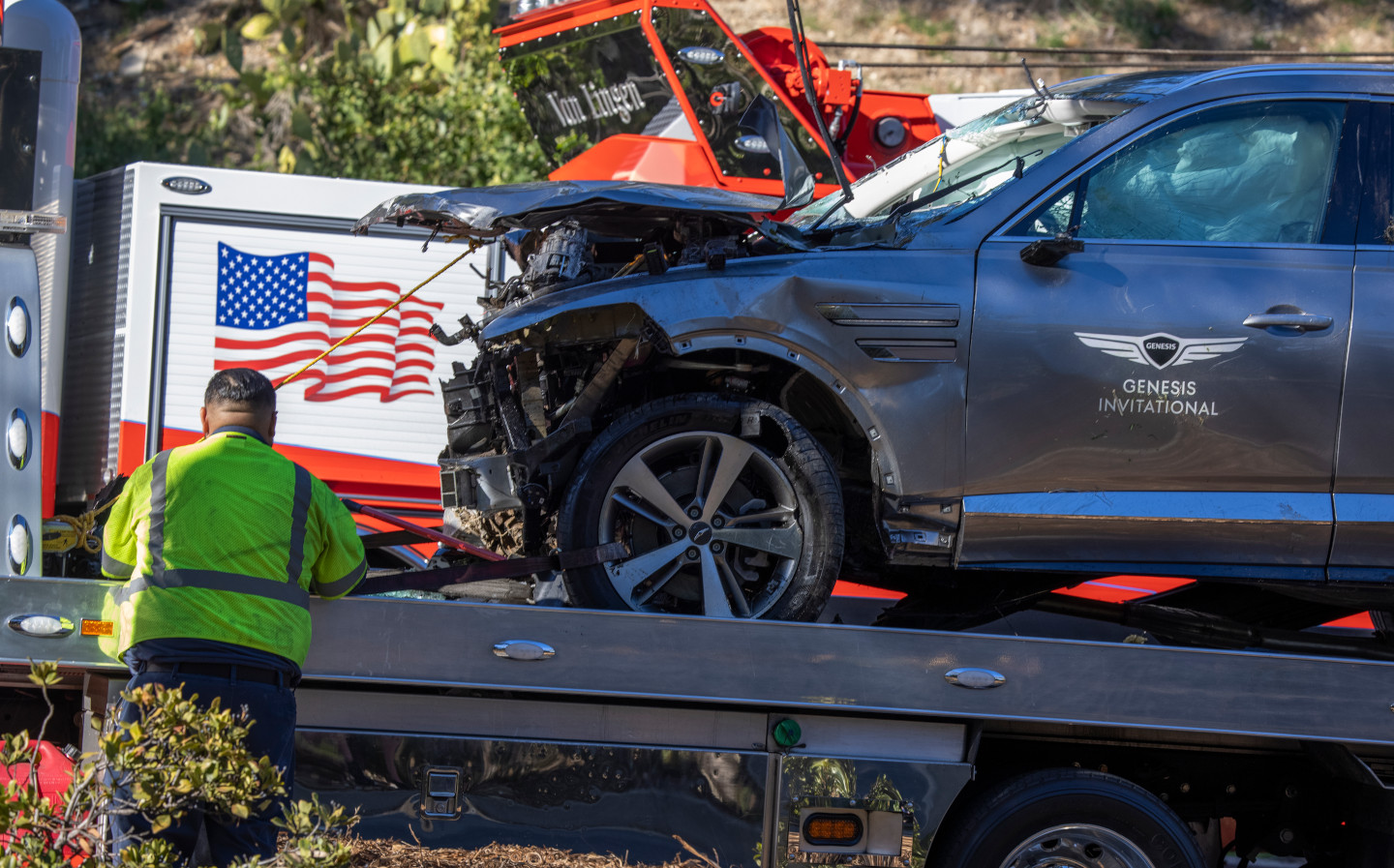 TIGER Woods may have been asleep before his crash at the wheel of a Genesis SUV last week, experts have suggested.

The 45-year old golfing legend suffered the crash on the morning of February 23 and required emergency surgery to his lower-right leg following the incident.

He was transferred to Cedars-Sinai Medical Centre in Los Angeles on Friday and is said to be “recovering and in good spirits”, according to a statement posted to his Twitter account.

The Genesis GV80 courtesy car Woods was driving travelled across the median strip and off the road. It was travelling at “a relatively greater speed than normal”, according to L.A. County Sheriff Alex Villenueva. However, Villenueva refused to speculate on whether the golfer had been driving recklessly.

Forensic car accident experts have now told USA Today that the circumstances of the crash are indicative of “a classic case of falling asleep behind the wheel”.

Jonathan Cherney, a consultant who works as an expert witness in court cases and had examined the crash site in person, said the fact that Woods’ car had maintained a straight course while the road curved right signified that he may not have been paying attention at the time of the crash.

“It’s a drift off the road, almost like he was either unconscious, suffering from a medical episode or fell asleep and didn’t wake up until he was off the road and that’s where the brake application came in,” Cherney told the news network. The consultant also said that he did not see evidence of “any steering input” by Woods to try and avoid the collision.

Experts have questioned Villeneuva’s assertion that Woods’ had not applied the brakes, which was made based on the lack of skid marks at the crash site. All modern cars such as the Genesis GV80 are installed with advanced anti-lock brakes and electronic stability control meaning that skid marks may not be prominent even if Woods did press the brake pedal.

Expert analysis suggests there is evidence that Woods braked late into the accident, and his injuries are consistent with someone applying the brake at the point of impact.

Woods was found asleep at the wheel of his Cadillac in 2017, and a toxicology report revealed prescription drugs including Vicodin and Xanax were in his system at the time.

He was found guilty of reckless driving at a hearing and subsequently entered a rehab facility. Authorities said that they did not feel it necessary to test Wood’s blood for drugs or alcohol following Tuesday’s crash.

The Genesis GV80 is equipped with several advanced driver assistance systems (ADAS), including a Driver Attention Alert Warning that “monitors the driver’s attention when driving, by analysing driving patterns and behaviours, including intermittent steering and unnatural deceleration”. Pop-up messages and warning tones are designed to alert the driver if fatigue is detected.

A spokesperson for Genesis said: “Genesis was saddened to learn that Tiger Woods was in an accident in a GV80. Our thoughts and prayers are with Tiger and his family as we wish him a full and speedy recovery. We do not have any further details to share at this time.”

According to a tweet posted this morning, Woods has found displays of support by the golfing world “touching”. Golfers including Rory McIlroy and Patrick Reed turned up to the final day at WGC-Workday Championship at The Concession yesterday wearing red shirts and black trousers, Woods’ famous Sunday outfit.

“To every golfer and every fan, you are truly helping me get through this tough time,” Woods said.