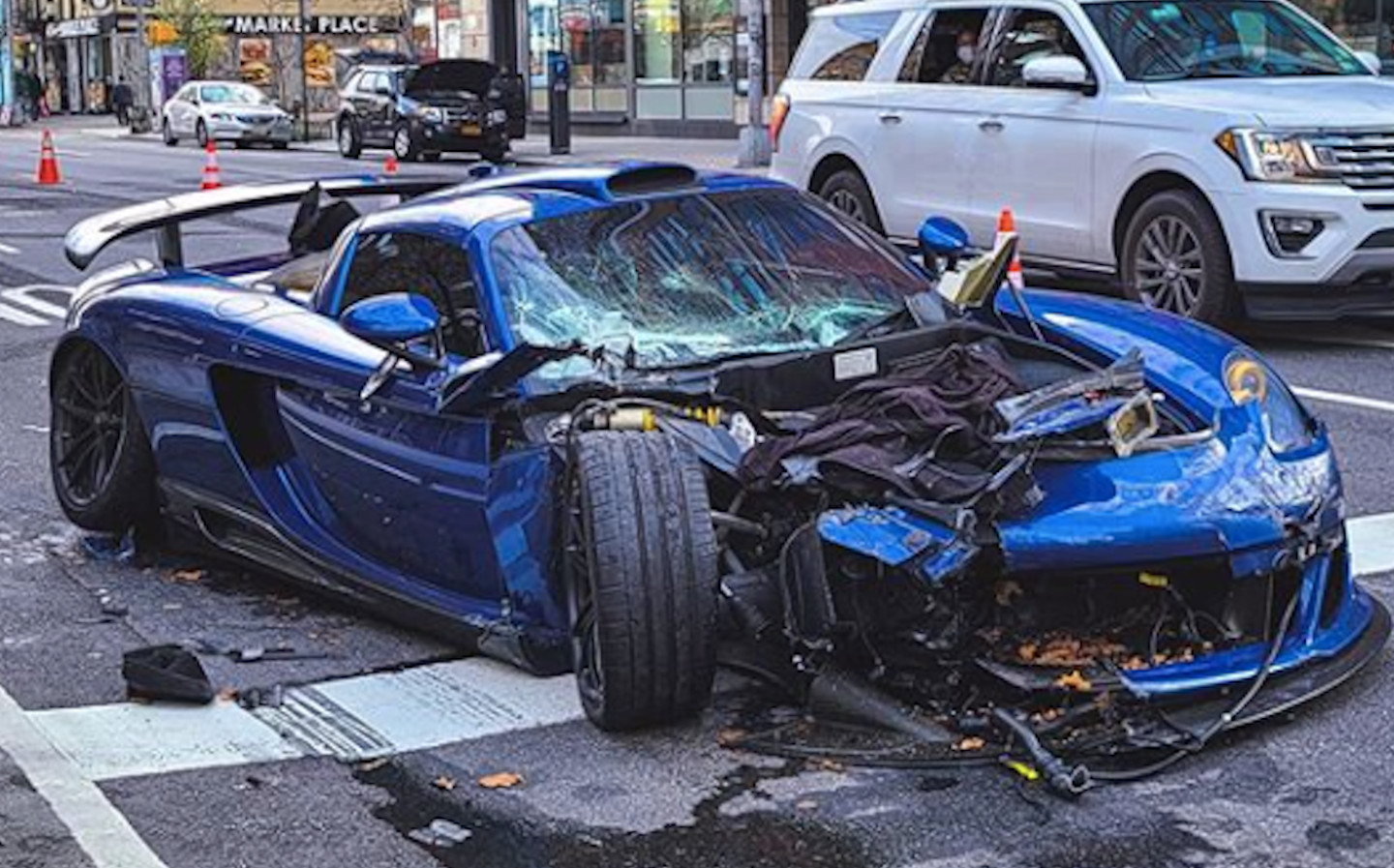 BENJAMIN Chen, a millionaire and known lover of supercars, has been filmed smashing up an ultra-rare supercar in New York — before driving away from the scene of the accident.

The founder of the controversial goldRush Rally can be seen on CCTV footage hurtling into the back of a white MPV at significant speed. Mobile phone footage posted to social networks then shows Chen driving off before colliding with several other vehicles in Hell’s Kitchen.

The New York Police Department confirmed to Driving.co.uk that Chen has been charged with Operating a Motor Vehicle Impaired by Drugs, as well as Reckless Driving.

As the CCTV footage shows, the 2014 Mirage GT, which is based on the Porsche Carrera GT (which is pretty rare already, with only 1,270 units made), lost control on a straight street before smashed into the back of the white MPV, which was thankfully unoccupied.

The NYPD provided the following statement:

“On Tuesday, April 7, 2020 at approximately 0730 hours, officers responded to a motor vehicle collision in the vicinity of West 44 Street and 11 Avenue, within the confines of the Midtown North Precinct.

“Upon arrival officers observed a 33-year-old male operator and sole occupant of a 2014 Porsche Gemballa Mirage GT conscious and alert at the scene.

“The suspect was taken into custody at the scene.”

Any car enthusiast will have winced at the pictures from New York-based photographer and Instagram user ronniecnyc, who photographed the supercar looking more than a little worse-for-wear.

Rough morning *photos taken by me*

After the initial collision, Chen, who lives in a luxury apartment block a couple of streets from where the collision took place, didn’t stick around to confess. Video shows the Mirage being driven away from the crash, with his front-right wheel so trashed that it isn’t even touching the road.

After it came to a stop not far up the road, Police ordered a rather dishevelled-looking Chen out of the vehicle.

Photos of the car also show the rear-right wheel a few centimetres away from the road. In the video, you can see what appears to be the car’s front bumper flying off as Chen attempts to flee.

Is he trying to leave? ? wtf

Only 25 Mirage GTs were made, and Chen’s is reportedly the 23rd to be completed. Gemballa tinkered with the suspension, added an extra 57bhp (taking the total to 660bhp) and an extra 29.5 lb ft of torque (to 465 lb ft). That enables the supercar to hit 62mph from standstill in 3.7 seconds, which isn’t much use if your final destination is the back of an MPV.

Several people online have pointed out that Chen seems to have a vendetta against nice cars. He reportedly totalled a McLaren 12C during a goldRush Rally after losing control of the car, and was charged with reckless driving. The McLaren wasn’t Chen’s, according to the reports — he is said to have rented the British supercar.

One commenter on Twitter said Chen is “Also the guy that crashed a 1 of 3 Manual Murcielago SV after being kicked out of a Cars and Coffee somewhere in LA”. Cars and Coffee are meet-ups of car enthusiasts that are notorious for crashes when supercar owners depart, with the footage usually posted online within seconds by legions of smartphone-wielding onlookers.

Chen’s judgement has also been called into question after reportedly calling the £1.3m Koenigsegg Agera R a “hunk of shit”.

Reckless drivers the world over are using the lack of traffic on the streets as an excuse to push the pedal further to the metal. Superintendent Andy Cox of London’s Metropolitan police last week told Driving.co.uk of worsening incidents of speeding across London, including one Tesla driver who saw fit to hit 134mph in a 40mph zone.

The Carrera GT has a reputation for being a bit feisty at higher speeds, but that’s not much of an excuse if you’re allegedly driving under the influence in the middle of New York City.