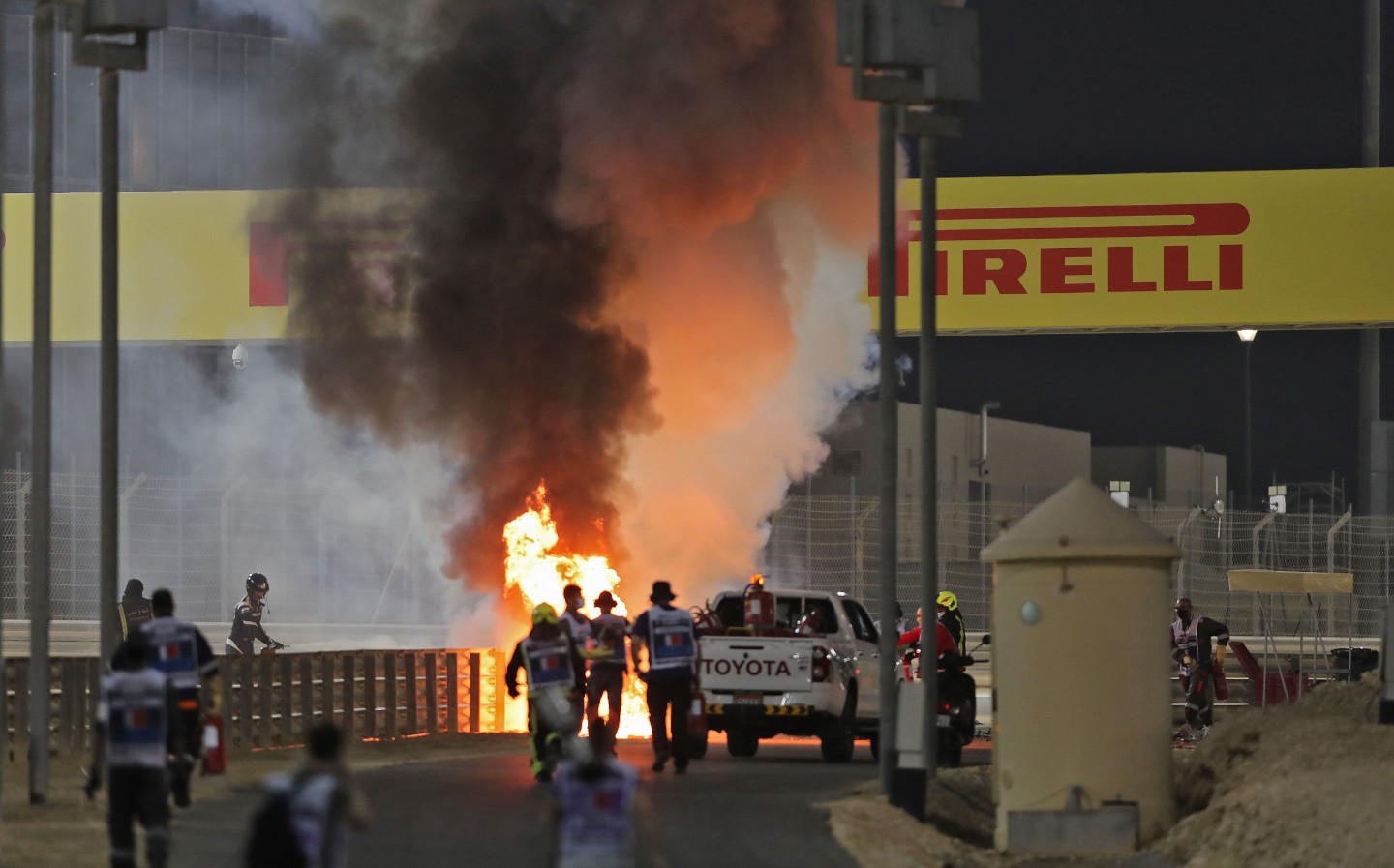 Grosjean crashed into a barrier at the third corner of the Bahrain International Circuit in Sakhir, at a speed of 140mph, whereupon his Haas F1 car split in two and burst into flames.

With the help of FIA doctor Ian Roberts and Formula One medical car driver Alan Van der Merwe, as well a number of safety marshals, Grosjean managed to escape the inferno and is now being treated in hospital for second degree burns on his hands. He is expected to be released tomorrow.

Haas has already confirmed that the French-Swiss driver will be replaced by reserve driver Pietro Fittipaldi for the Sakhir Grand Prix at the same circuit this weekend.

The Bahrain GP was immediately red flagged and, once Grosjean had escaped the wreck, television coverage replayed footage of the crash multiple times.

Speaking soon after the smash, Daniel Ricciardo said: “I’m disgusted and disappointed with Formula One for choosing the way to show it as they did, and broadcast replays after replays after replays of the fire, his car cut in half, and then like that’s not enough, they go to his onboard [footage]. 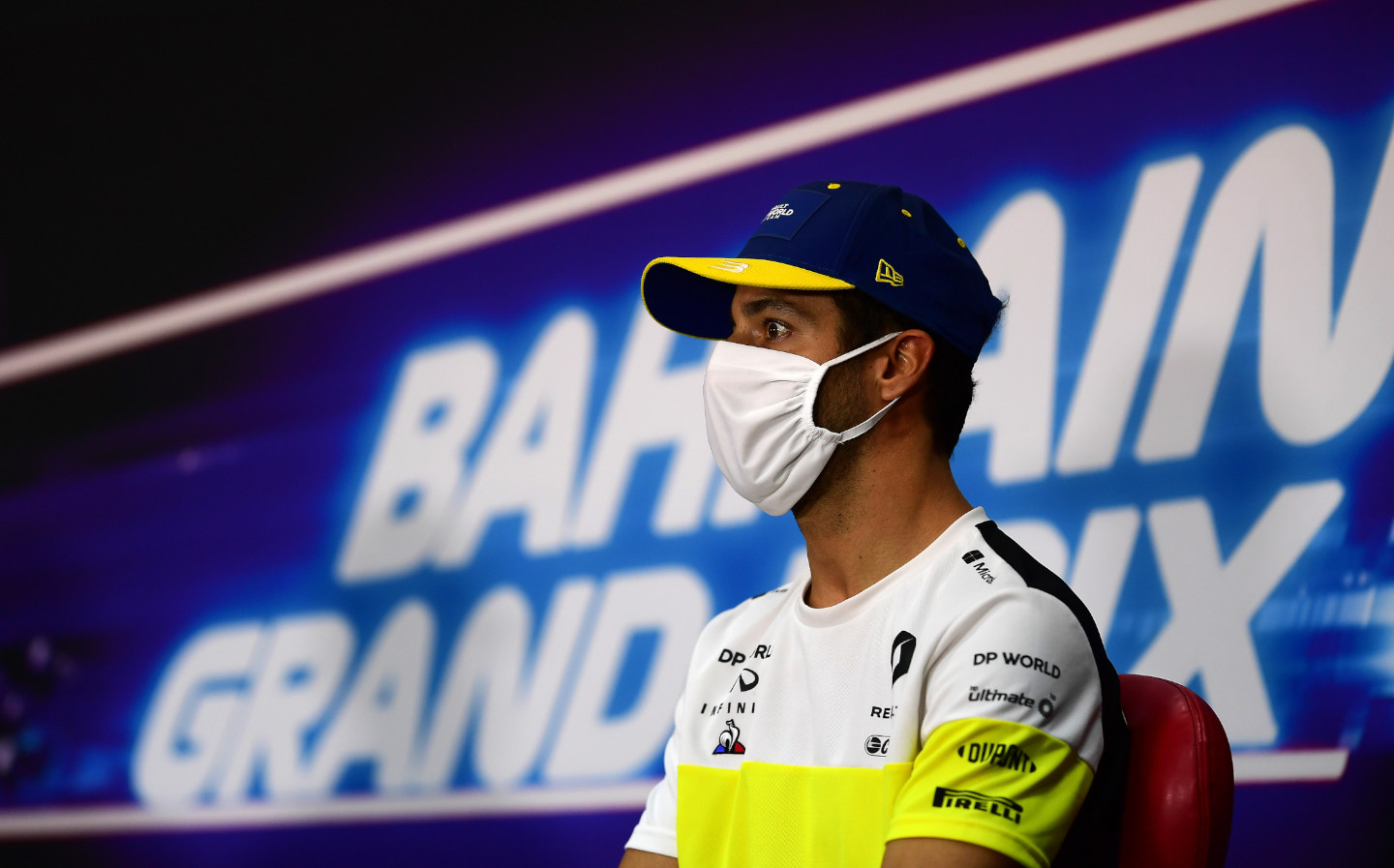 “It’s really unfair. It’s not entertainment. I had a lot of rage. I still do, it was just very, very poorly handled, and it felt like a game.

“We’re lucky he’s here, but it could have been a different story. To show it like it’s something from Hollywood, it’s not cool. Choose to do that tomorrow, but not today.”

Me and My Motor: Renault F1 driver Daniel Ricciardo

How the medical team assisted Grosjean from the flaming wreckage

This evening, Dr Ian Roberts and Alan van der Merwe appeared on Times Radio’s drivetime show with John Pienaar to discuss their experience of the events. Dr Roberts was asked if he thought the crash was survivable, on first arrival at the scene.

“Well, no is the simple answer,” he said. “It all started as a fairly standard first lap but we saw the fireball as we came through to turn three, arriving on the scene to see half of the car — the rear half — and [it was] facing the wrong way. And looking to our right then we we saw the other half on the other side of the barrier and in full flame. Quite horrendous.”

“Certainly the magnitude of everything took a second to process,” said van der Merwe. “We’ve been to a few severe incidents in the last few years but never a combination of a heavy accident and fire. So yeah, our initial scan of the scene made us assume the worst.”

That changed within as little as five seconds, he added, once they saw Grosjean had climbed out of the car.

Dr Roberts said: “The first thing we saw was Romain trying to get himself up out of the cockpit and we could see that through the big gap in the Armco [barrier]. As he was lifting himself out — quite frantically, as you might imagine — we managed to get an extinguisher directed directly at that point and managed a small enough window to get in, and once Romian was at the top of the barrier, pull him out. But approaching was very, very hot.”

Dr Roberts said the heat was such that the visor of Grosjean’s helmet had fused shut and the tear-off strips, which aid visibility during a race, had melted such that the driver had limited visibility.

The doctor then explained his extraction strategy: “Really, it was just get him away, and to get him sat down because I wanted him to sit down before he fell down. Get the helmet off, so I could see him just check for any life threatening injuries to his face and his airway.

“And once the helmet was off, we had quite a reasonable conversation, really, considering I was expecting the worst in terms of a potential knockout. But his main complaint then was the burns on his hands, which we applied some first aid to before getting off to the ambulance.”

He added that Grosjean was very calm after his ordeal: “Extraordinarily so. In fact, he told me to talk to him normally, so I think I was probably trying to explain something and he wasn’t having any of it. Which was good to hear — I like that when they can answer back. That’s great.”

Other drivers echoed Ricciardo’s sentiments. Interviewed after the race, four-time Formula One world champion Sebastian Vettel said he had not looked at the images of the crash and that he “didn’t really want to”. Mercedes driver Valtteri Bottas said: “I feel like people, spectators, want to see it. But there’s a limit as well.”

Ricciardo later posted to his Instagram to wish Grosjean well: “So much to say but the main thing is Romain’s health which we can be thankful for.

“Thank you Alan [Van der Merwe], Ian [Roberts] and everyone from medical staff and marshals who assisted. Thoughts with Romain, his wife and kids.”

Toto Wolff, team principal of Mercedes F1 team, said that F1 faced a tough decision in regards to the footage. “Those images were frightening and graphic,” he said, “but if you’re not transparent as an organisation, you’re just taking the risk that somebody else shows stuff that is beyond your control.”

Others have noted that the incident all but ends the debate around Halo, the safety device that protects the heads of F1 drivers.

The extra bodywork was criticised by some F1 drivers — including Grosjean himself — when it was made mandatory for the 2018 season.

Some criticised both the aesthetic properties of the safety devices, as well as their contradiction with the concept of “open cockpit racing”.

However, Grosjean yesterday praised them as the “greatest thing we’ve bought to Formula One”.

“Without it, I wouldn’t be able to speak to you today,” he said in a video — showing him in a hospital bed with heavily bandaged hands — uploaded to the Haas F1 team’s twitter account yesterday evening.

An update from Romain himself. Pleased to see you’re in good spirits! We hope you make a speedy recovery ? pic.twitter.com/njnjjH4GBi

Former and current F1 drivers agreed with Grosejan. Damon Hill, who won the drivers’ championship in 1996, said: “I think many of us old fart drivers perhaps thought the halo was a going a little bit too far on the safety front and looked pretty ugly, but I tell you what: it’s a lot prettier seeing a guy get out [of the car] after an accident like that, isn’t it.”

Williams’ George Russell, who finished the race in 12th place, said: “I think had the halo not been there, it would have been an incredibly different outcome. I guess the safety has moved along so much in recent years, so we can only be grateful.”

Ross Brawn, managing director of F1 and former technical director of the championship-winning Benetton and Ferrari teams, said: “There’s absolutely no doubt the Halo was the factor that saved the day, and saved Romain.

“And I think the team behind it need crediting for forcing it through — if you recall, there was quite a lot of controversy at the time about introducing it, and I don’t think anyone now — especially after today — can doubt the value of it. Hats off to everyone involved, because it was a lifesaver today.” 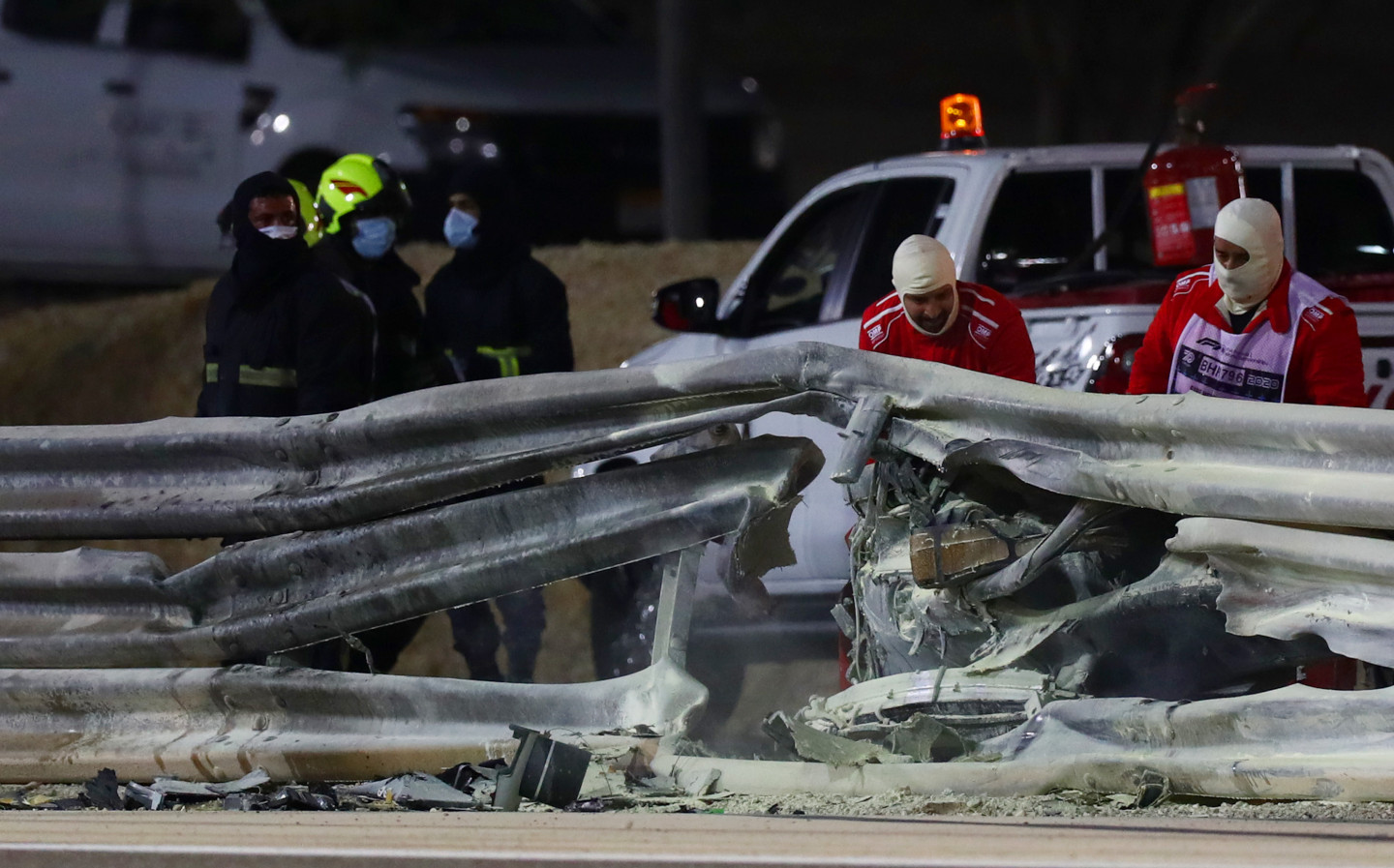 Although he praised the safety of modern F1 cars, Brawn also said a “very deep analysis” of Romain Grosjean’s F1 crash must be carried out in order to find out why a “number of things that shouldn’t have happened” occurred.

He cited the fire as a worrying factor, as well as the fact that the barrier into which Grosjean crashed split in two.

Former racing driver Johnny Herbert said that the motorsport world should not get complacent about safety.

“There is that slight danger still around,” he warned. “With all the technology that we have nowadays, with the crash barriers that generally take the impacts, we never see these types of incidents. It’s one of those things, situations can happen if the right ingredients are there.”

After reading about Renault F1 driver Daniel Ricciardo being disgusted by repeated showing of Romain Grosjean’s fireball crash, you might want to read about the Lewis Hamilton Commission, which aims to end racism within F1.