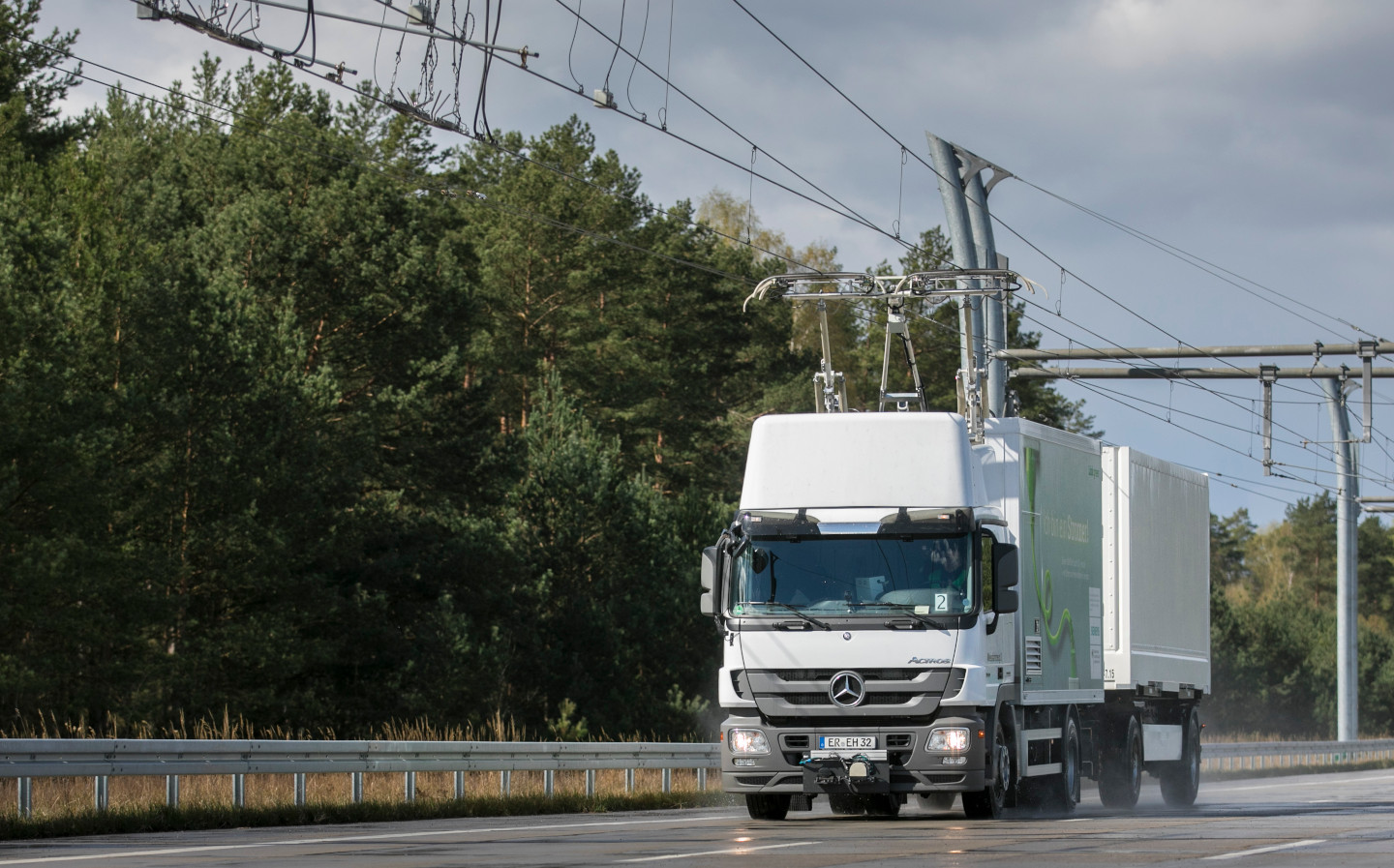 A GOVERNMENT-BACKED study has recommended that the inside lanes of motorways should be transformed into “e-highways” for lorries, as part of a plan that would lower the UK’s emissions by as much as 5%.

The idea, pitched by academics from Cambridge and Edinburgh, would involve more than 9,000 miles of motorway and A-road being fitted with railway-like overhead electric cables.

Heavy goods vehicles (HGVs) could then link to the electrified cables using pantograph rods that extend from the roof, as used by trams. The electricity would then by used to power the lorry’s electric motor and charge its battery, which is drawn from when the vehicle leaves the e-highway to complete its journey.

Under the proposal, the bill for the upgrades would come to £19.3bn. This could be footed by charging hauliers for the electricity they use, it said.

The paper from the Centre for Sustainable Road Freight (CSRF) claimed that, along with the battery electrification of urban delivery vehicles, the infrastructure would almost completely decarbonise UK road freight.

The CSRF, which receives funding from the engineering and physical sciences research council, claimed that through the profit margin on electricity sales, the initial investment in the idea would be paid back within 15 years. It also estimated that the network would cover 65% of the miles travelled by heavy goods vehicles (HGVs) in the UK.

Such systems have been used in other countries across Europe, including Germany and Sweden, with further demonstrations planned in Italy. Ministers are now being urged by the Centre to support an £80m pilot project in Yorkshire that would illuminate policy and implementation issues specific to the UK.

The proposed 25-mile stretch of road between Doncaster and Grimsby in South Yorkshire would need to be completed by 2025, said the paper’s authors, so that the three-phase rollout of the infrastructure can begin. They suggested that a full rollout of the network could be complete by the end of the 2030s.

The government will now need to weigh up the environmental benefits of the proposal against its cost and its potential to cause further disruption on the nation’s roads.

Sheffield-based road repair business Roadmender Asphalt said the plan requires vast amounts of infrastructure to be installed for the network to be operational, which has traditionally caused hours of backlog for motorists due to the need for trenches to be cut. However, it said that advancements in trench filling, including the use of a thermoplastic material made from recycled lorry tyres, could speed up the process of repairing the trenches five fold.

Last year the UK became the first country to sign its commitment to achieving “net zero” greenhouse gas emissions by 2050 into law. Such an achievement will require significant changes to road transport, both commercial and passenger. Around a fifth of the UK’s greenhouse gas emissions come from road transport. A ban on the sale of new petrol and diesel cars is set to come into effect in 2035 — possibly earlier and could include hybrids, subject to consultation.

Long haulage has been seen as a downside of battery-electric technology due limited range and slow recharging times. Tesla is planning to launch its own electric tuck, known as the Tesla Semi, with a range of either 300 or 500 miles, and the American company claims a charging time of 30 minutes for the version with the larger battery. An e-Highway would result in many fewer stops, though EU rules require drivers to be on the road for no more than nine hours a day, and they must take a break of at least 45 minutes after no more than four and a half hours of driving.

Some companies have looked to the possibility of hydrogen fuel cell technology, which could be a better solution for hauliers as the weight of a hydrogen gas tank is significantly lower than that of a battery pack, and refuelling takes no longer than doing so with diesel. However, it would also require significant investment due to the lack of refuelling stations across the UK. Rapid electric chargers are much less costly to install than a hydrogen refuelling station. Hydrogen gas also needs to be either delivered to the refuelling stations by truck or created and compressed on site, which is an energy-intensive process.

David Cebon, one of the co-authors of the paper, said that three times the electricity would be needed to power a hydrogen fuel cell HGV than one connected to the grid. He said: “You would end up in a situation where the government was subsidising the production of hydrogen while losing tax revenues from fuel duty.”