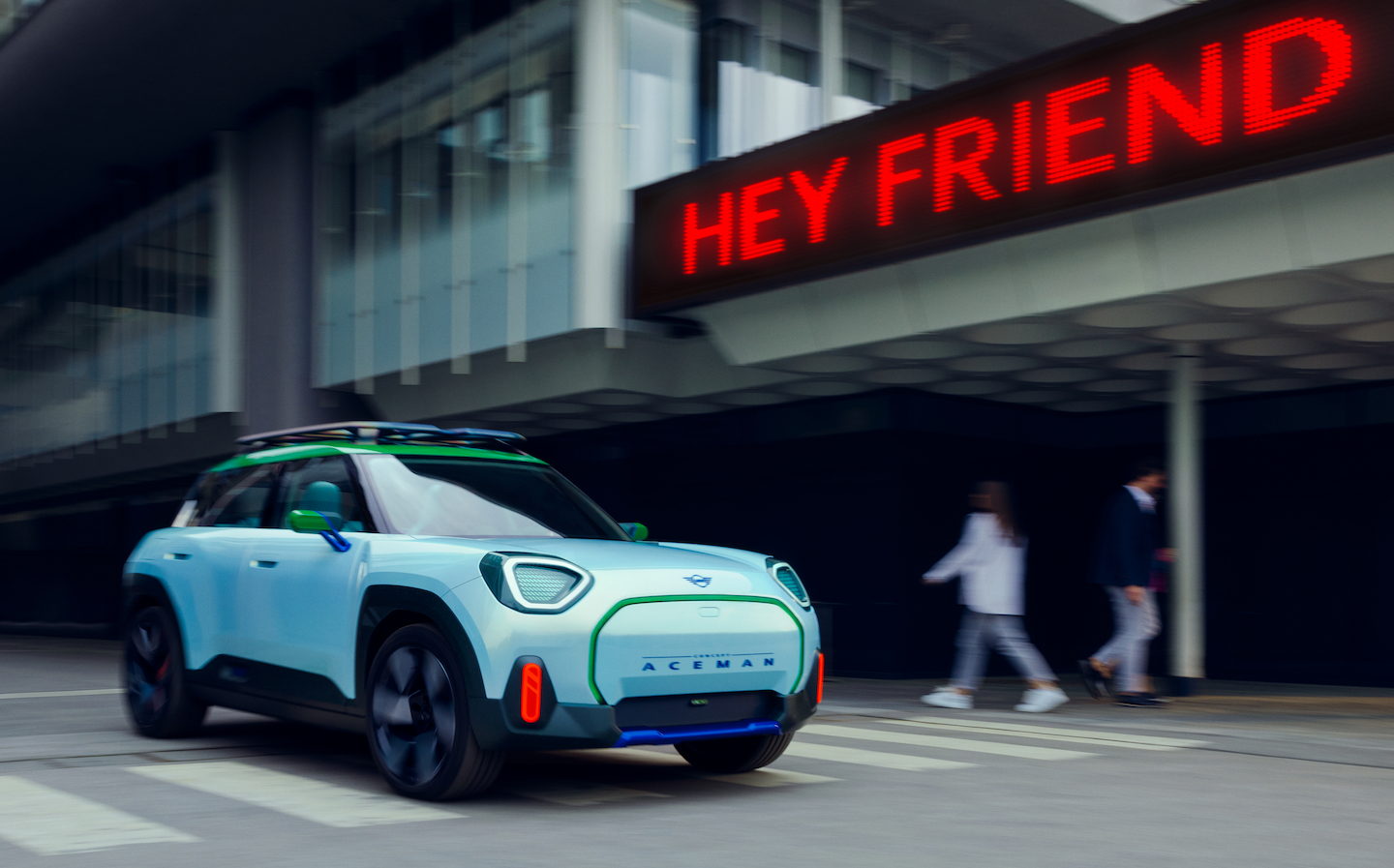 Mini has revealed a new concept car, the Aceman, which it says showcases the company’s new “Charismatic Simplicity” design language as well as providing a preview of a new electric crossover due to arrive next year.

According to the carmaker, the new model will sit in the range between a new Mini Hatch and a new Countryman, both arriving next year.

New cars from Mini will dispense with the chrome and leather trim which were a hallmark of models in the past, pushing instead for the smoother, more minimalistic look that’s also more sustainable.

Gone is a grille (as an electric car, it doesn’t need one), replaced by a smooth, octagonal surface shape outlined with an LED strip and featuring in-built lighting elements to produce variable effects. Another change from past Minis is the headlights — they’re not round, as before, instead adopting a more angular shape. As with the grille panel, they’re outlined by an LED ring.

That’s part of a running theme with the Aceman: overall, it’s less rounded and more angular than Minis have been up until now, a look which arguably lends itself better to a more rugged, crossover stance. The lines are crisper and sharper, and the wheel arches more pronounced and boxy.

That isn’t to say that the Aceman has lost touch with its past. One rather nice touch is the way the diagonal surface creases at the base of the windscreen hark back to the welded seams of the classic 1959 Mini.

Mini has made Union Flag motifs part of its designs in recent years, to underline its Britishness; the Aceman is no exception. LED elements in the grille animate the shape of the flag, as do the rear lights. Even the roof rack up top carries the Union Flag shape.

Inside, the Aceman is almost as minimalist and spartan as the Paul Smith-designed Mini Strip, with a great sense of roominess. That’s thanks to the sheer lack of adornment and the panoramic glass roof.

Many of the controls are accessed through the large, circular OLED display, which dominates the dash and serves as the instrument cluster. The production version will retain this set-up and gain a smaller instrument display ahead of the driver.

Beyond purely digital surfaces, there’s the ability to project imagery onto the dashboard and around the rest of the interior should the occupant wish to customise or switch up the ambience.

Just below the circular touchscreen is a bar of toggle switches and knobs which hark back to Minis of old and, in this case, operate the parking brake, select gears and adjust the audio controls.

Mini’s move away from leather and chrome is part of a more widespread shift towards a more eco-friendly use of materials such as recycled plastics in car production, not just by Mini itself or the BMW Group as a whole but also industry-wide.

The Aceman will use knitted recycled polyester for the upholstery and seams, reflecting its rufty-tufty crossover aspirations. The interior colour schemes are muted, with dark and khaki finishes.

Mini says that around 80% of the Aceman’s design elements will make it through to the production version of the new electric crossover. It is due to be unveiled in 2023 and is expected to have two battery options. In time a sportier John Cooper Works version will be available, too.

The new Hatch and Countryman will be offered with electric powertrains from the outset, though interestingly, the electric Hatch will be built on a different platform to the petrol model, one co-developed with BMW’s Chinese partner, Great Wall.

That company will shortly relaunch in the UK with its cutesy electric supermini, the Ora Funky Cat.

It appears that 2023 is shaping up to be a very busy year for Mini.