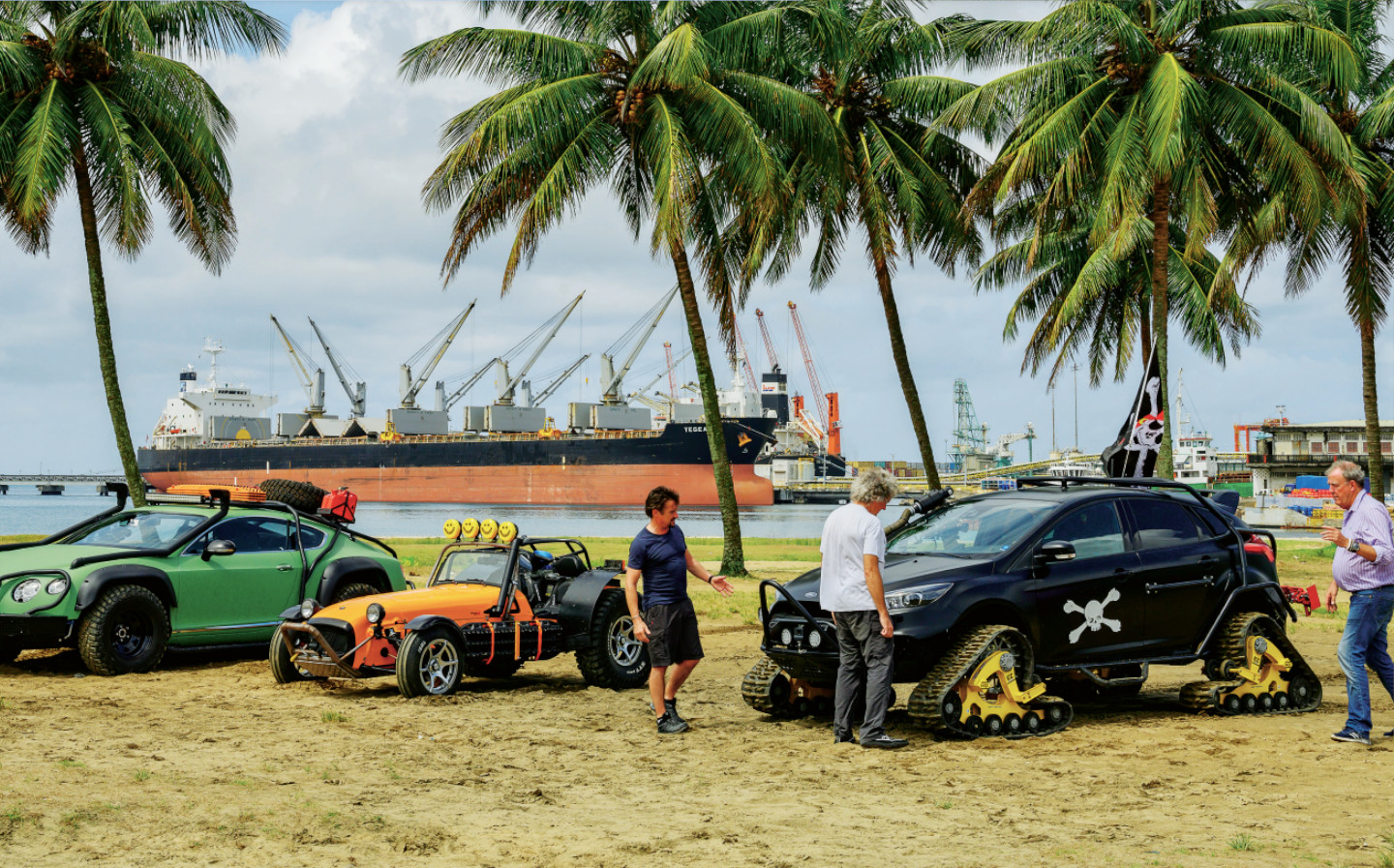 JEREMY Clarkson has said that the upcoming The Grand Tour special episode set in Madagascar was the most difficult trip that he and fellow presenters James May and Richard Hammond have filmed for the Amazon Prime show.

The special, entitled “A Massive Hunt” and set to release on December 18, will see the trio head to the island of Madagascar on a hunt for the buried treasure of the pirate La Buse (“The Hawk”), real name Oliver Levasseur.

Levasseur is thought to have stashed one of the biggest treasures in pirate history on the island, reportedly worth hundreds of millions of pounds.

Clarkson reveals in today’s Sunday Times Magazine that the trip through Madagascar was so tough that, for the first time in The Grand Tour’s short history, one of the trio’s cars did not make it to the end of the week-long journey.

In the film, Clarkson drives a Bentley Continental GT, May has a Caterham Seven 310R and Hammond is behind the wheel of a Ford Focus RS.

All three presenters had alterations made to their cars ahead of the trip on the infamous RN5 road, which snakes through Madagascar’s beautiful scenery but has been described as the worst road in the world.

Clarkson called it: “not a road in any accepted sense of the word. It’s just some earth where, for the most part, trees aren’t growing. I’ve seen post-storm riverbeds that have better surfaces.”

Some of the extensive modifications made to Clarkson’s Bentley to help it tackle The Grand Tour‘s toughest trip yet included completely replacing the suspension, fitting armour plated undersides, a rollcage, new brakes and new wheels, and rerouting the fuel lines.

Hammond described his Focus RS as a rally car for the road, which meant that it “wasn’t going to be ideal for proper off-roading”. So he added tank tracks to it.

Meanwhile, May, whose Caterham was perhaps the most-ill suited to Madagascan roads, according to Clarkson, simply fitted larger rear wheels to the roadster before “disappearing to the pub”.

The car that doesn’t make it to the end of the trip is unlikely to be Clarkson’s Bentley. “Life was a lot better” in the Bentley than in the other two cars, he says in his article, and in fact he fell in love with the Continental GT to the point that he had it shipped back to his farm, where he managed to get the car to do 140mph in one of his fields.

May’s Caterham may well have been left on the island, as Clarkson says it made his co-presenter “very hot and very muddy and very unhappy a lot of the time”.

Jeremy Clarkson: Bentley Continental GT Convertible is perfect … but it drives me mad

But Clarkson doesn’t get the last laugh. His modified Continental GT won’t remain with him on his Diddly Squat farm as the Driver and Vehicle Licensing Agency (DVLA) has told him that, because his car is a development vehicle, it must be destroyed to ensure that it cannot “seep onto the market”.

“So,” said Clarkson, “one day soon now, my beloved car — the best and hardiest I’ve ever driven — is going to the crusher.”

If you enjoyed reading that the Madagascar special was The Grand Tour‘s toughest trip yet, according to Jeremy Clarkson, you might be interested in Clarkson’s review of the new Land Rover Defender 90.