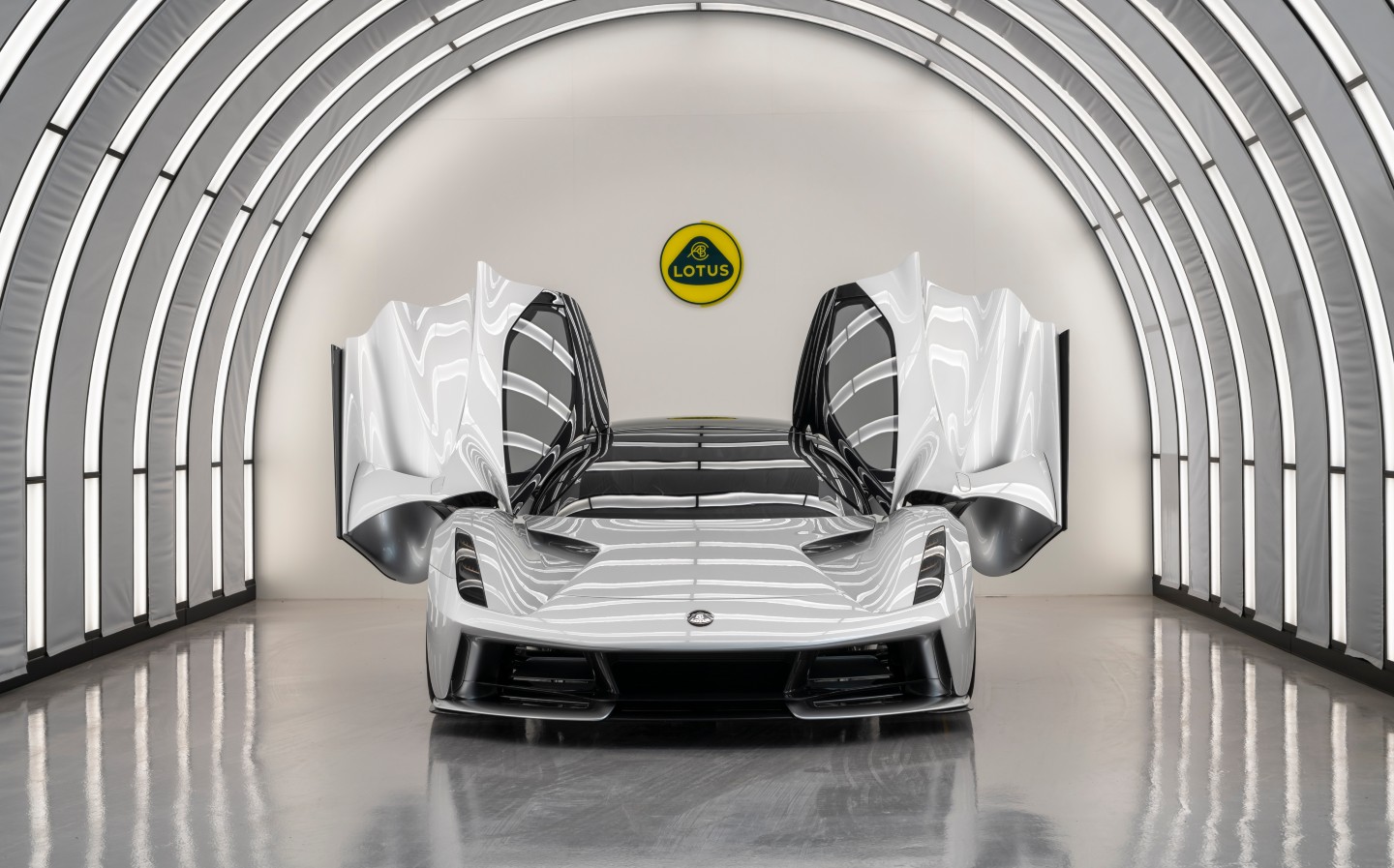 THE CORONAVIRUS pandemic has hit the car industry hard. Lockdown forced showrooms and factories to close, and sales so far this year are down 48.5% on 2019. In April the figure was 97.3%, with just 871 private registrations recorded in the month – the lowest number of sales since 1946.

One might expect the smaller players to suffer the most, but Lotus, with a total of around 1,200 employees at its Norfolk headquarters, seems to have weathered the storm.

“By the end of this month, we’ll be back up to 100% efficiency in terms of manufacturing,” chief executive Phil Popham told Driving.co.uk. “That has involved a lot of planning in terms of processes, factory layout, making sure that absolutely our staff are safe. Everyone from an operations point of view is now back at work except for a small group of people that are still shielding.” 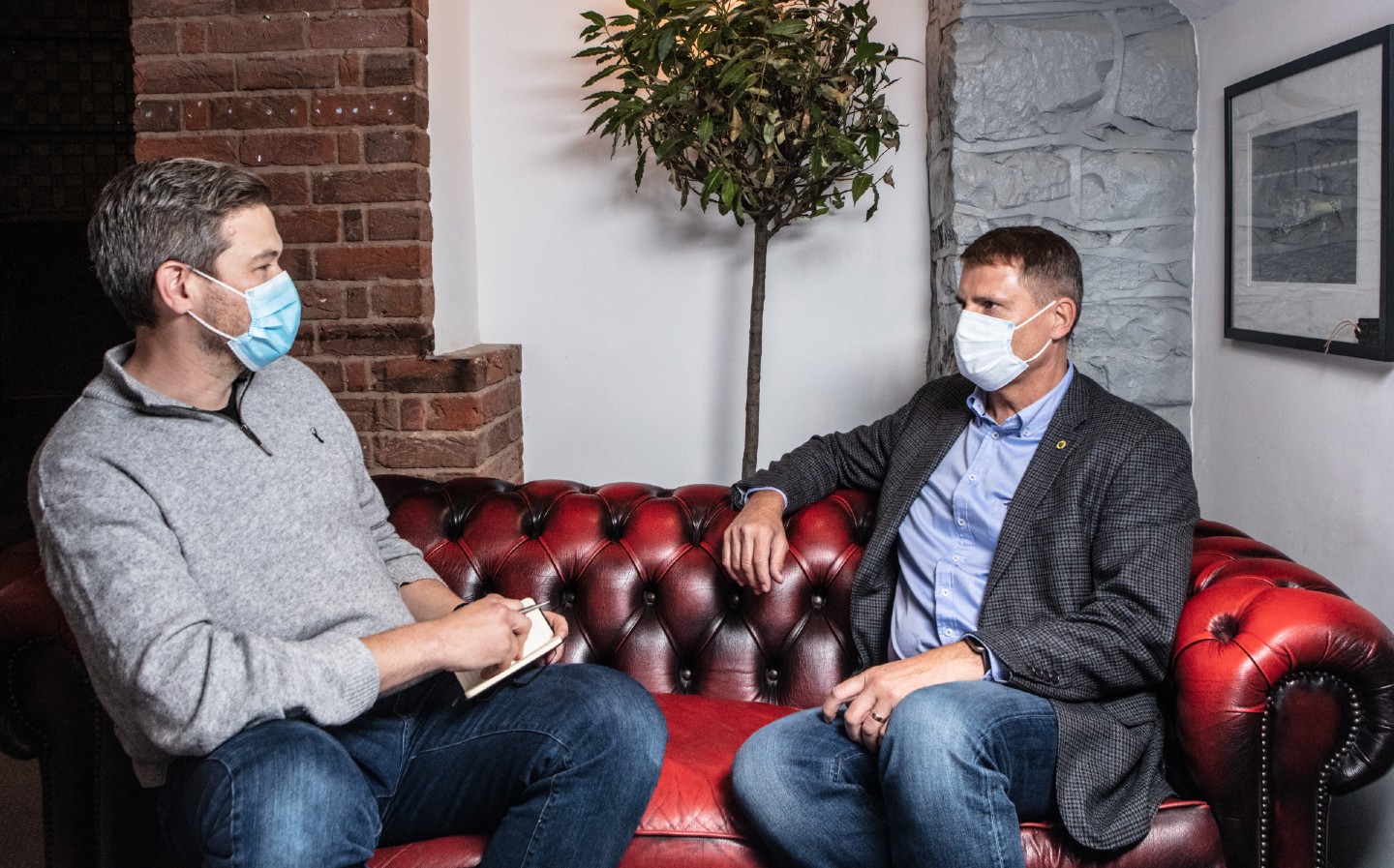 Popham says that he didn’t have to cut any jobs due to lockdown, and although the entire factory workforce was furloughed, they were all kept on full pay. “We’ve benefited from the government scheme of 80% pay for those on furlough, which was welcome. It came in very, very critical as effectively we lost 10 weeks of production and 10 weeks of revenue.”

Lotus also benefitted from being a part of the fastest-growing automotive company in the world: Geely, which makes cars under its own name but also owns Volvo, Polestar and the London EV Company – the manufacturer of the capital’s new plug-in black cabs.

“Obviously, China went into the pandemic a long time before we could see what was happening there,” Popham says. “And we were encouraged to actually prepare for the worst and hope for the best. So the expectation of a lockdown was very real, and we were prepared for that.”

How early was that?

“Early part of the year so January/ February time we were investing in I.T., in terms of equipment and systems to make sure that we had the ability to have people working remotely – all of our engineers and designers.” 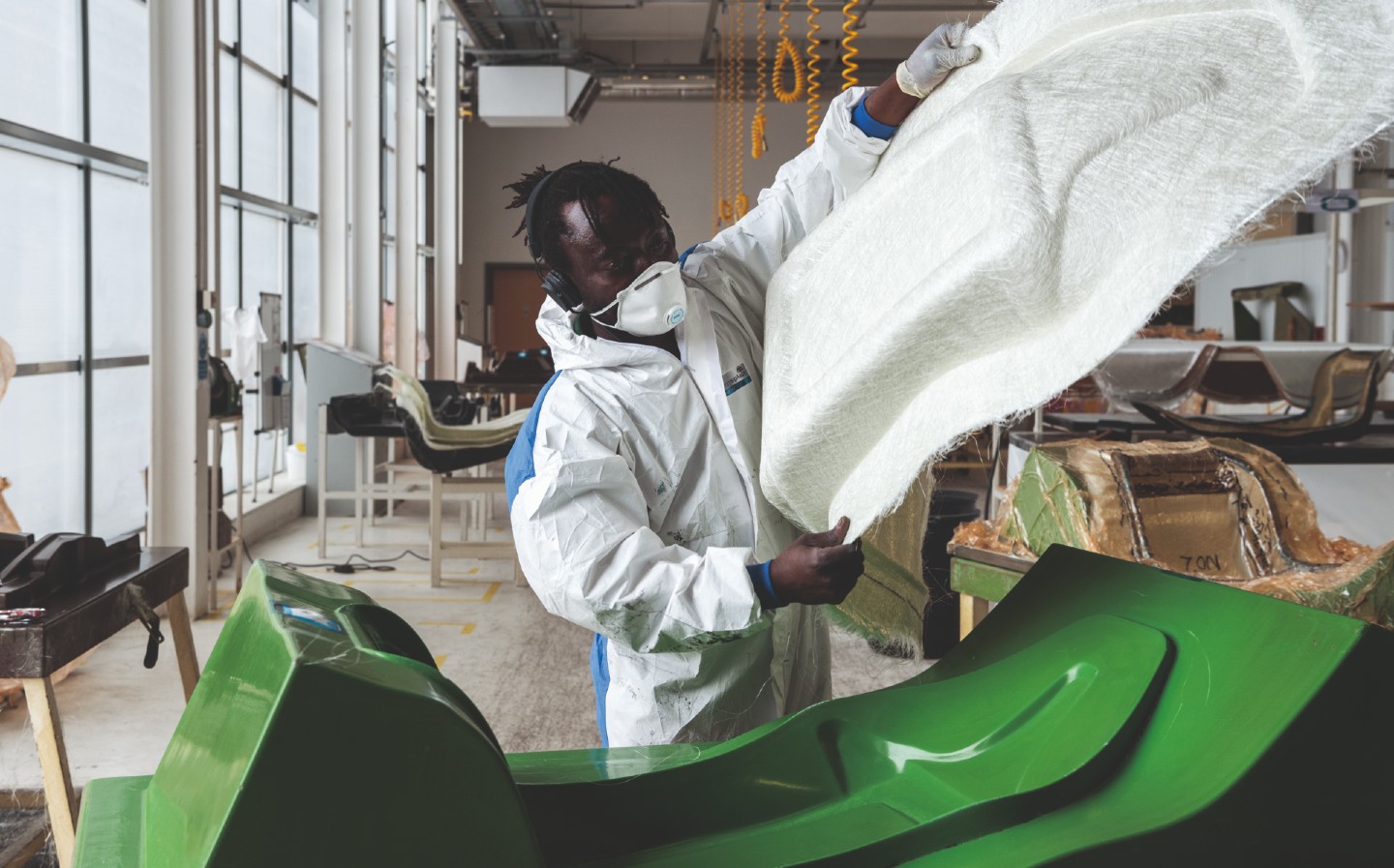 Lucky is not the right word, given the circumstances, but having a head start on the competition is certainly an advantage. Popham says 90% of those who have been working from home are still doing so, including engineers and designers, though they will be returning to HQ over the next couple of weeks.

Lotus has taken extraordinary steps to make sure that people are safe, according to Popham, including keeping the two metre distance rule at work, despite the government reducing the guidance to “one metre plus”. Anybody that absolutely has to operate with less than two metres from someone else is working with the appropriate PPE (personal protective equipment), he says. There are also changes to the car park, body temperature testing when staff members walk through the door and one-way systems are the site. 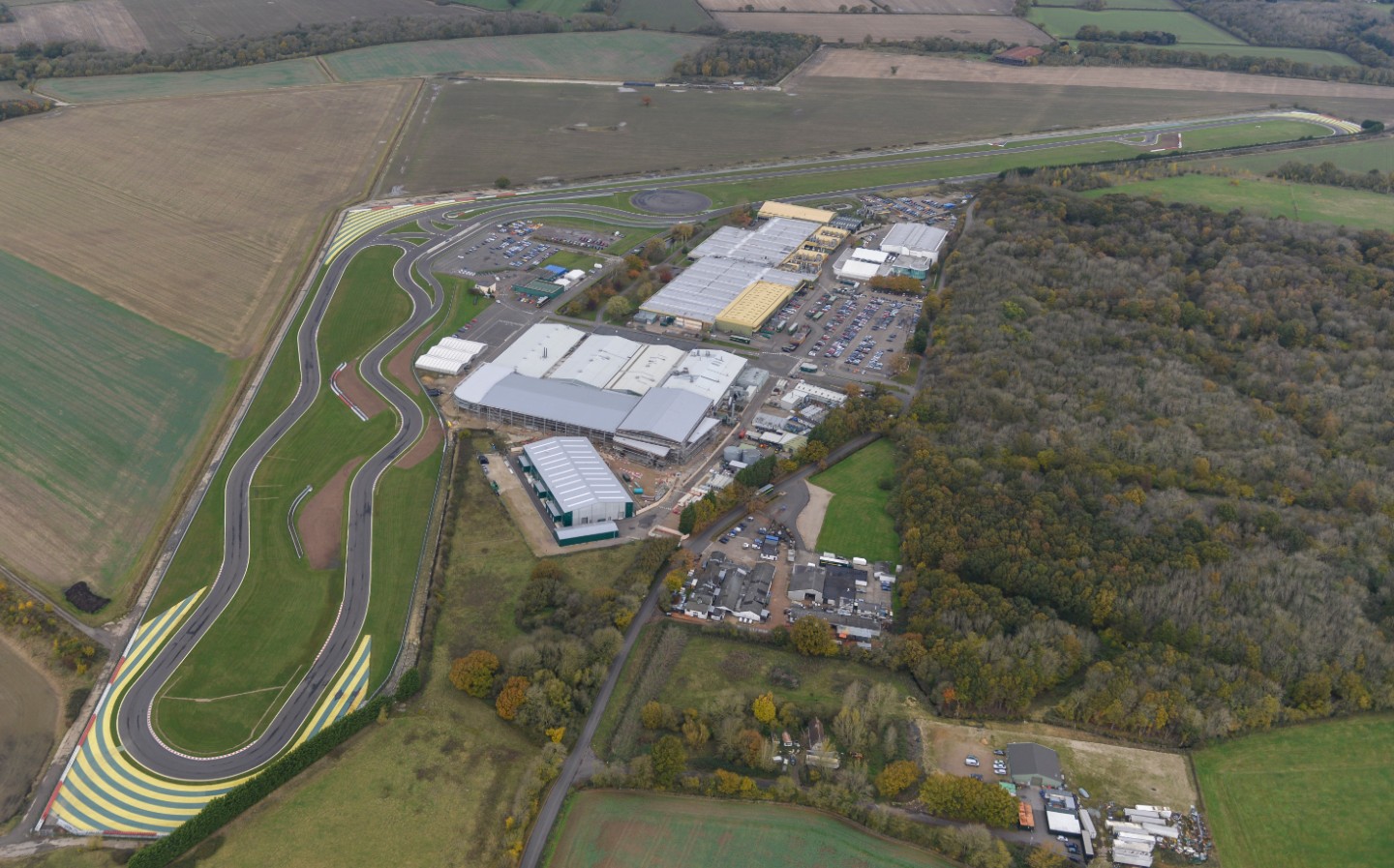 “I think we will develop and we are working on what the new normal should be. And that’s all about flexibility, efficiency, and productivity.”

In addition to those returning to Hethel, earlier this month the company announced an extra 125 jobs for its “lightweight structures” chassis-building and fabricating business in Norwich, so rather than being forced to contract this year, Lotus is doing the opposite — it’s expanding. Fortunately for Lotus, none of the company’s backers have pulled investment, so it’s game on with development plans.

The future is electric 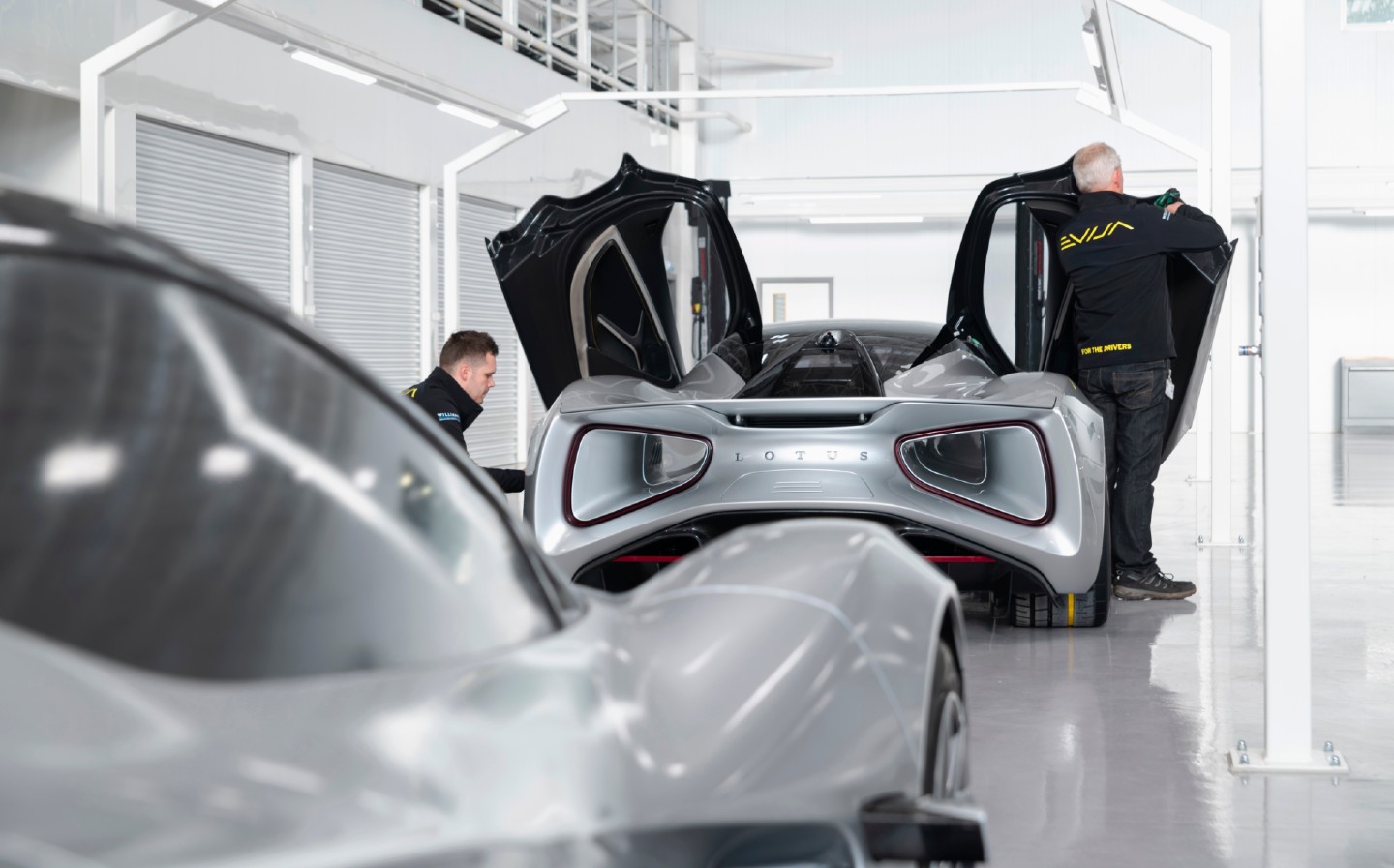 What everyone wants to know is how this has affected company’s future product plan, and in particular the Evija (Ev-aye-ya) hypercar.

Evija is not only Lotus’s first all-new model since it launched the Evora 2+2 mid-engined sports car in 2008, but also the firm’s first ever electric car.

Anyone worried about its performance credentials need not be concerned: Lotus claims the 1,680kg Evija packs a mammoth 1,973bhp and 1,254 lb ft of torque – around four times the outputs of the previous most powerful Lotus. It will be able to reach claimed speeds in excess of 200mph and the company is targeting 0-186mph in under nine seconds. The 0-62mph time will be sub-three seconds, it says.

Which is all very well, but is it still in development? Very much so, says Popham, and the company is now working hard to make up for time lost due to coronavirus. 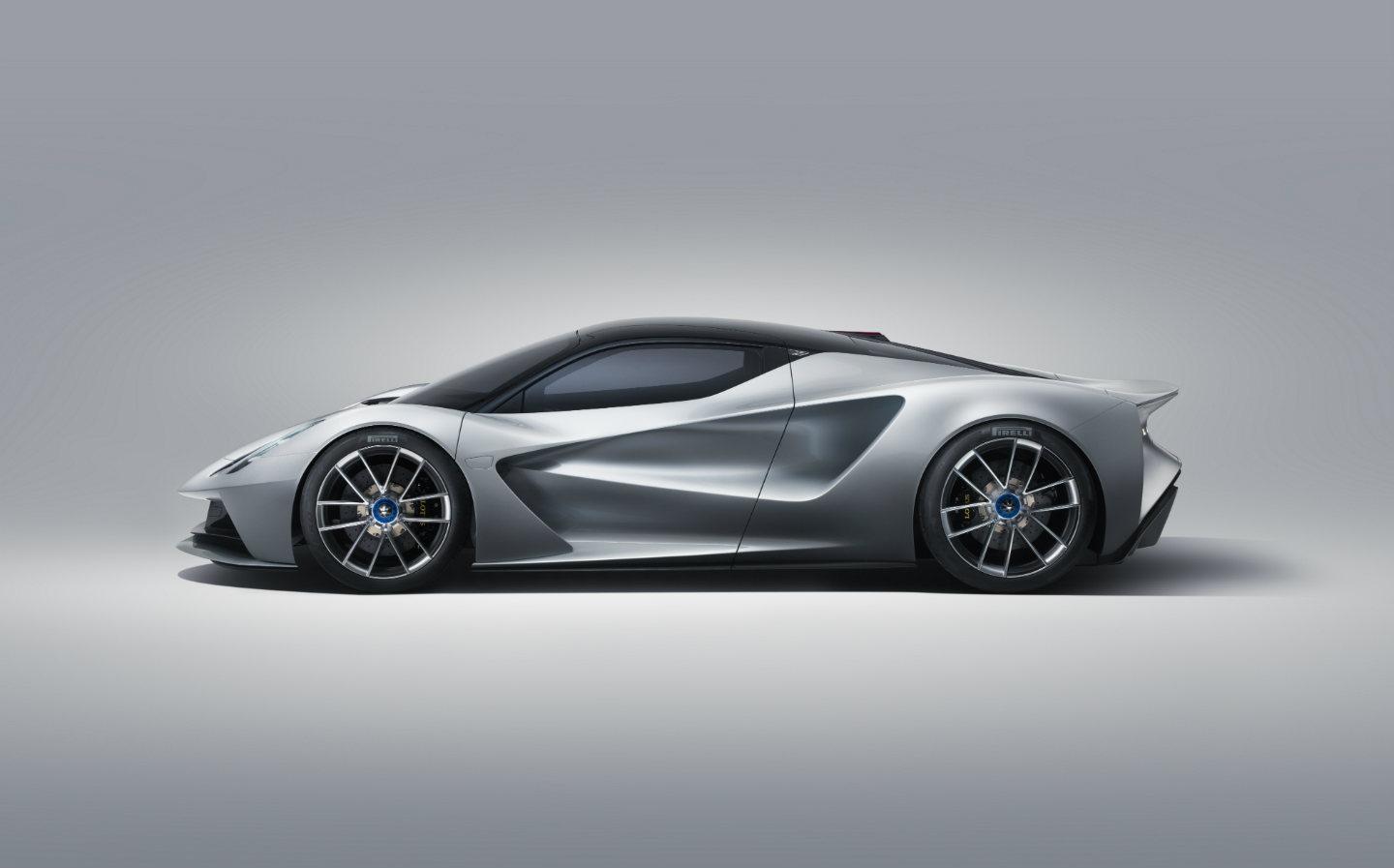 “A number of our engineering vehicles were actually in continental Europe at the time of lockdown, and had to come back. We are now in the process now of starting that testing back up.

“We’re allowed to travel again – our engineers are able to ship cars to where they’re needed. We pulled some of the testing into the UK as well, to help with that, and we’ll be assessing where we are in terms of the the engineering testing programme over the next the next few weeks.

“But everything else has carried on during shutdown, including construction at Hethel, where the car is being built. So from a manufacturing point of view, we’re ready. We’ve just got to go through the engine and final engineering testing.

“Obviously when introducing a £2m hypercar, it has to be 100% right before it’s actually released to customers.”

You read that right: £2m per car. Obviously that means it won’t be built in huge numbers but observers believe it could make a significant contribution to the company’s finances, and if Lotus gets it right, Evija will boost its reputation enormously. 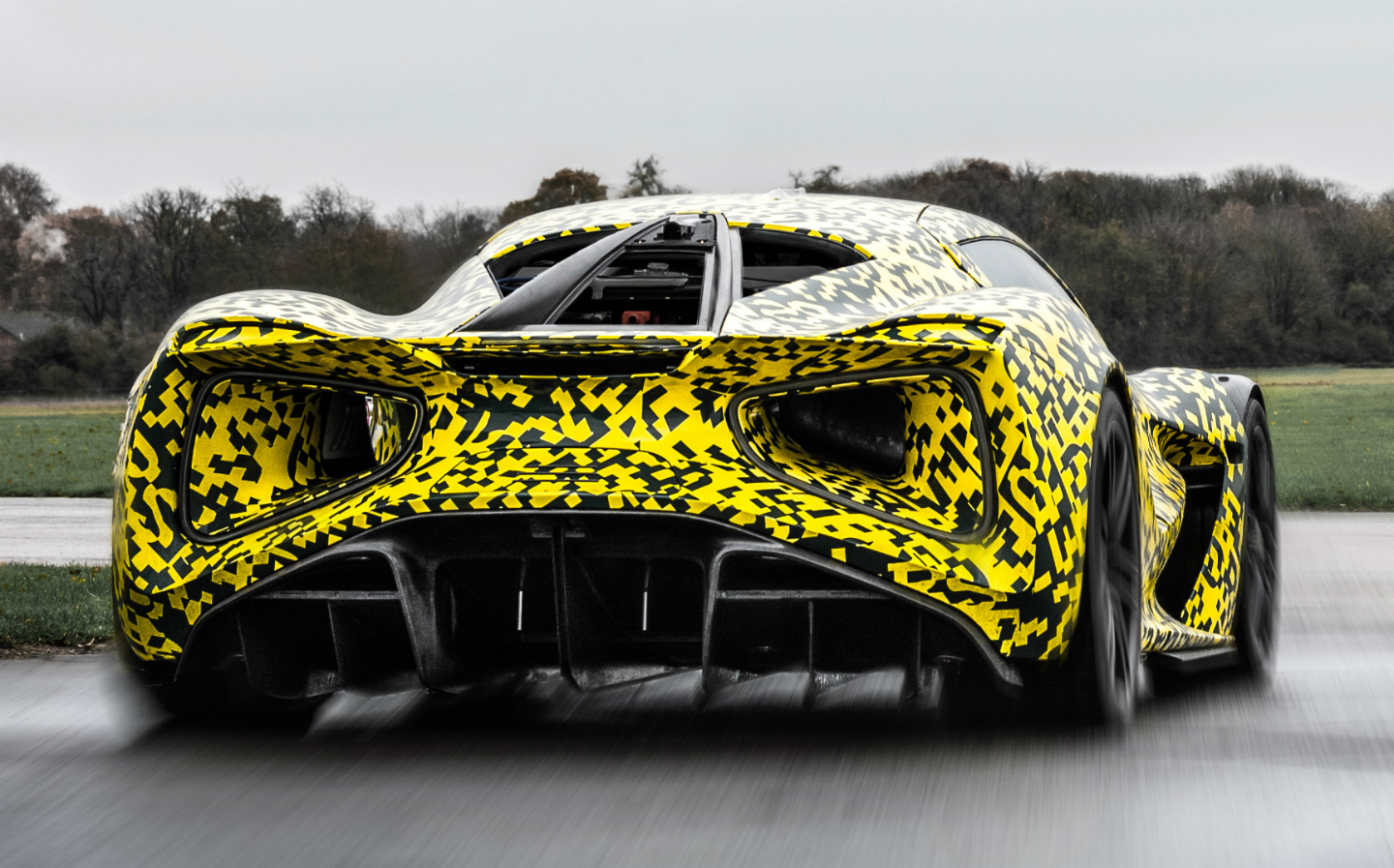 Popham says he is in discussion with a number of “discerning” customers, and has received both deposits and letters of intent to buy.

“We were in the middle of the [Evija] world tour when lockdown started. It had just landed in the US to do its east coast tour, and had to be brought straight back. We had to cancel the events, and would have been in continental Europe with it at the moment. So we’ve got we’ve had to replan all of our activities, because there’s lots of customers a lot of inquiries to say, I want to see this car.”

That will happen in the autumn and into the winter: “We will make sure that all those interested customers can actually see the car ASAP.”

Evija also signals a new direction for Lotus as the company embraces electrification. Its next (unnamed) sports car, due after Evija, will be the last one the company makes that’s powered purely by an internal combustion engine – all models after that will feature electric motors.

“We’ve said that we believe the future is electrification,” Popham confirms. “And we’re very focused on developing that.”

In the UK, the government has said it will ban the sale of all new petrol and diesel cars from 2035. It is consulting on bringing that date forward to 2032, in fact. Like other car makers, Lotus knows it has to adapt to survive.

“Long term, we believe the trend is moving towards electrification,” Popham says. “That will be from a customer perspective or regulatory perspective — that’s the future as we see it.”

Our meeting with Popham was preceded by a drive of both the Evora GT410 Sport and Exige Cup 430. Both of those cars feel wild, and their 3.5-litre supercharged V6 engines sound wild, too. Won’t loyal Lotus customers be put off by the sound of silence provided by electric motors? 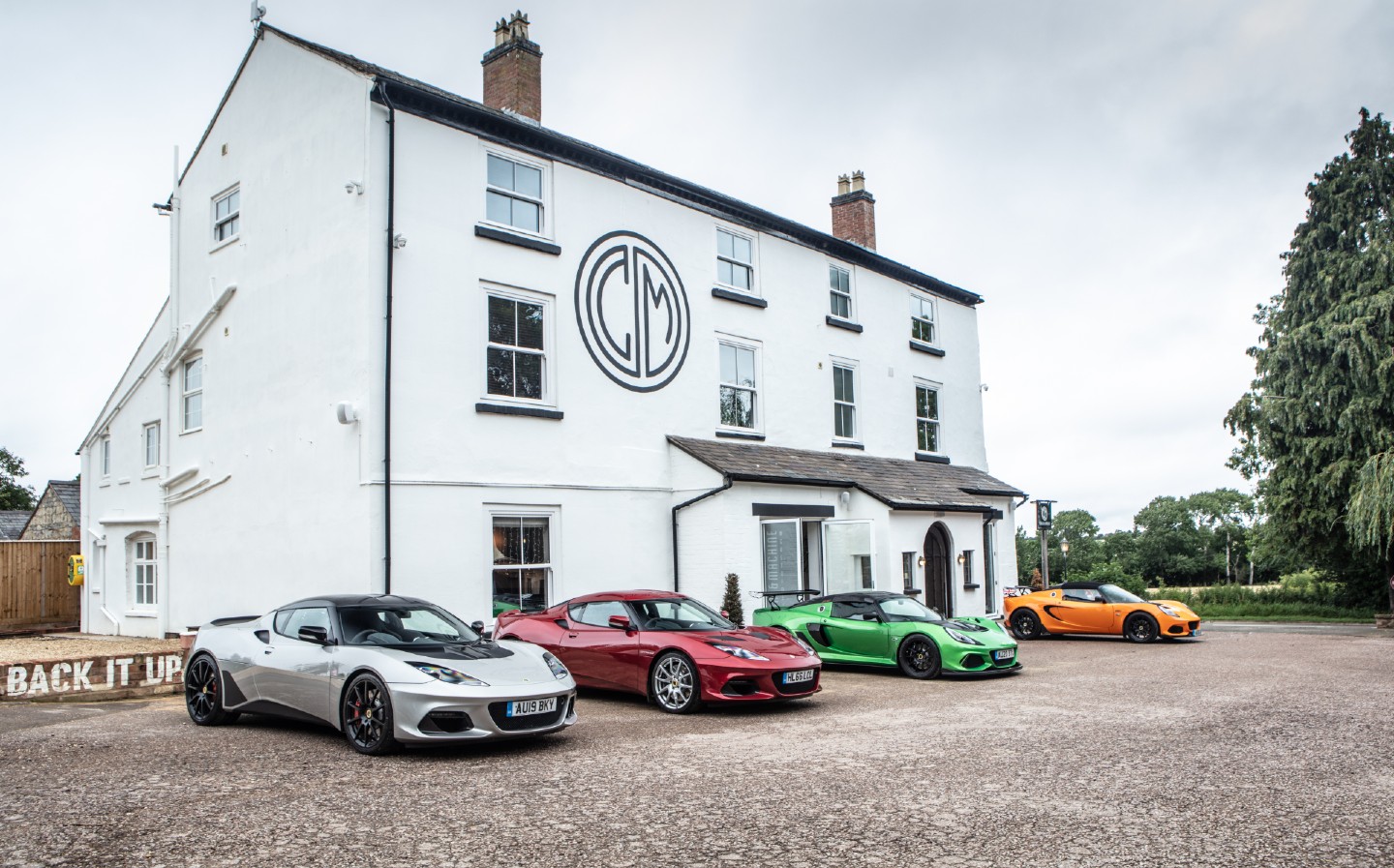 “That’s a question I’ve asked quite a lot myself, in terms of as the world moves towards electrification,” Popham says. “What is the sound expectation going to be? It’s a different sound, for sure. You can have everything very quiet or you can create whatever sound in the cabin that you want [piped in electronically].

“The modern generation has been brought up on internal combustion engines — the sound of that — but the world is moving towards electrification, and I think everyone will get used to a new sound. And people’s perceptions and expectations will actually change over time.”

What about hybrids and plug-in hybrids, which many manufacturers are rushing out presently while demand for pure-electric cars grows?Although pure-electric car sales are up 158.6% in the first half of 2020, compared with the same period last year, they still only account for 4.7% of the total market. 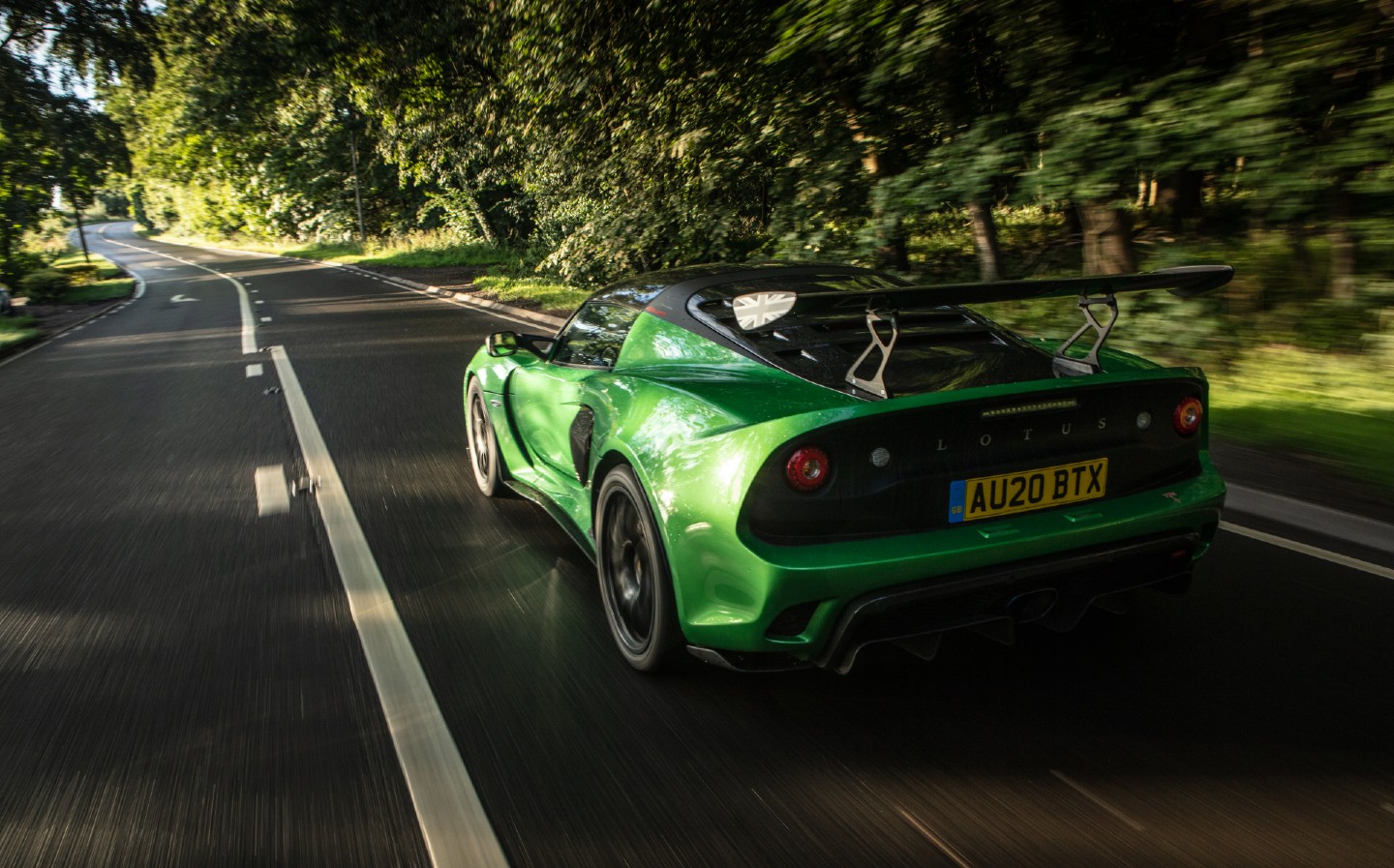 “Well, that’s a that’s an interesting debate at the moment,” says Popham. “From a sports car point of view, there are challenges with hybrids that you need to be able to overcome. You’ve got an internal combustion engine, you’ve got electric motors, you’ve got batteries, so that’s weight. You want to minimise weight [in a sports car].

“And also packaging — sports cars are generally smaller than the normal cars. You’ve got challenges with hybrids in terms of dynamics, as well — you want as much freedom as possible to actually design the car for aerodynamics.

“Whereas battery electric vehicles do give you a number of benefits in that respect. They give you freedom in terms of where you put the batteries, which allows you to focus on where the centre of gravity needs to be. It gives you a lot of flexibility in design to support aerodynamics and airflow over or through the vehicle. There are a lot of benefits of pure-electric. There are a lot of challenges around the halfway house.

Is an SUV in the works?

And those platforms might not just be suited to sports cars. From a financial point of view, SUVs make a huge amount of sense for car makers, due to their popularity and potential price premium over smaller models. The Porsche Cayenne, as unloved by the motoring press as it was when it first launched, is known to have saved Porsche from bankruptcy, and the popularity of the SUV bodyshape has meant that every car maker from Lamborghini to Roll-Royce has jumped on the bandwagon.

So far, Lotus hasn’t confirmed an SUV is in its future, though Popham has gone on record to say they aren’t being discounted.

“I’ve been asked a lot about SUVs and it’s an obvious segment for people to talk about. What we’re looking at moment is a potential to grow the brand into other segments, and we wouldn’t exclude anything, from saloon cars to GTs to SUVs to crossovers. All those segments we will consider.

“Obviously, an SUV or a saloon car would have a different dynamic to a sports car. But nevertheless, it would have to be uniquely a Lotus.

“And secondly, of course, we’ve got to be able to make money out of it. And those two factors are really driving our analysis at the moment about how we expand the brand in the future.”

Lotus’s final petrol-powered car will be an everyday driver