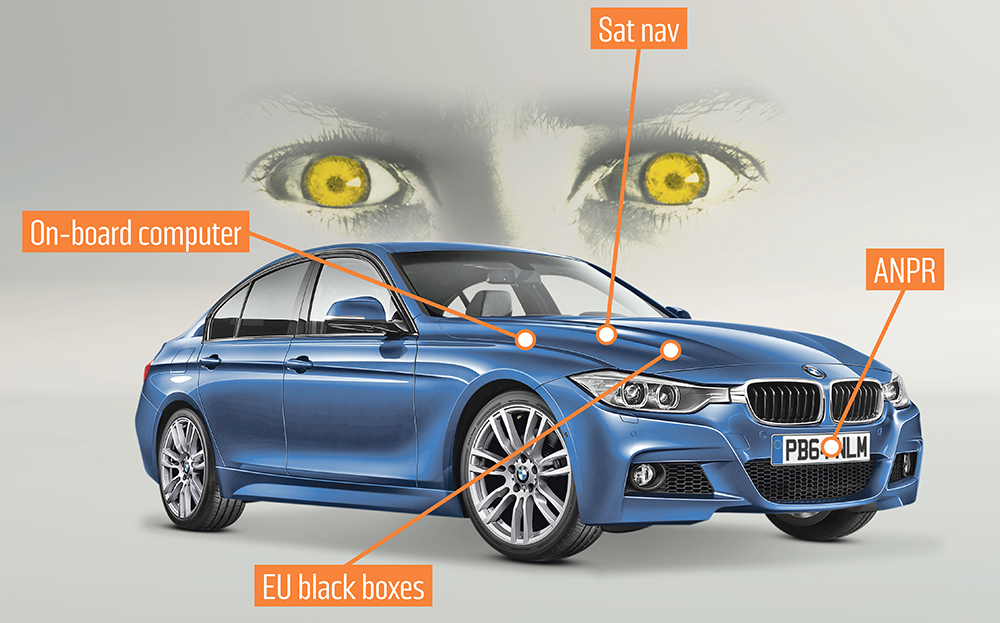 MOST OWNERS know their car fairly well: it needs to be warmed up in the morning, the clutch doesn’t like hill starts and the steering pulls slightly to the left. But how much does their car know about them?

New technologies mean that the family car sitting on the driveway is not the dumb machine of old. Instead it is busy gathering information on every move its owner makes. From what time they start the engine to how fast they travel on the A-road to work, to whether they deviated from their usual commuter route and whether — in the milliseconds before they had an accident — they applied the brakes.

The wealth of information is stored on computers dotted about the car. It can be used by authorities to build up a detailed picture of a driver’s movements and is being used by police as evidence to prosecute drivers for minor motoring infringements and serious crimes.

Police and car makers say innocent drivers have nothing to fear from the data — or from the increasingly sophisticated ways that authorities can extract it. But some privacy groups argue that drivers risk being under surveillance whenever they get behind the wheel, with little warning of how much their movements are being monitored.

Many drivers would be lost without their sat nav, but many don’t realise that the devices (whether fitted as standard to the car or as aftermarket add-ons) provide a record of the car’s movements, including routes taken, for up to a month before being automatically deleted. The information can be analysed by police for use in criminal investigations.

Last month Wai Hong Tsang was jailed for life for killing his former wife in Lincoln. Initially, Tsang was not even a suspect: he apparently had a strong alibi that put him 40 miles away from the murder scene, and Lincolnshire police arrested somebody else. But they began to be suspicious and seized his sat nav. Examination of the device showed Tsang’s car had been parked in a lay-by outside the city for more than two hours. From there, he had cycled to his former wife’s home to kill her. The sat nav information allowed detectives to find CCTV footage of him cycling through the city before and after the murder.

Separately, police have warned that thieves are breaking into cars and using the sat nav to guide them to the owner’s home address (set as “home” on many users’ sat navs). They are then able to make their second “hit” on the victim — and burgle the property knowing the occupant is likely to be out (on the basis that their car was parked elsewhere). Police are urging motorists to wipe personal details from the gadgets or risk having their homes ransacked.

When a car is involved in a collision, dozens of sensors automatically create a snapshot of every aspect of the vehicle, including throttle and brake position, speed and when the airbag was deployed. In the past this information was difficult to retrieve and was accessed only in serious accidents or where large insurance claims were involved. Now police have a new weapon that enables them to access all the information stored on the car’s computer in a matter of minutes.

A device called Crash Cube can be plugged into vehicles after an accident to discover exactly what happened in the split second that the collision occurred. Police investigators are able to find out a vehicle’s speed, whether the driver was applying the brakes and — depending on the model of vehicle — if the driver was speaking on their hands-free phone.

The £6,000 device works by tapping into the incident reports that a vehicle automatically generates when a fault is detected: simply a headlight smashing in a crash will trigger a snapshot of dozens of sensors across the car to identify exactly what was happening at the time of the problem. The Crash Cube has recently been approved by Interpol after testing across Europe, including an 18-month trial in Britain. It is now being rolled out across the country. Humberside police are using the device already and Essex police have one on order.

“It has already helped us to show who was to blame in several accidents,” said John Rusted, a senior accident investigator at Humberside police, who is also promoting Crash Cube in Britain.

“We got that information in less than six minutes. It resulted in a six-year prison sentence for the Porsche driver.”

The EU is working on proposals to install mandatory black boxes in every new car in Europe, constantly monitoring speed, steering angle and braking. If an accident is detected, the box stores all the information from up to 45 seconds before a crash and 30 seconds afterwards.

In addition, last year Interpol told Driving that some of its 190 member police forces use the eCall emergency call system to track suspects. The system, already fitted to some luxury cars, automatically connects drivers to a call centre to notify it of a vehicle’s location after a crash. It can also act as a tracker and be activated remotely. The EU plans to make it mandatory in all new cars from 2018, meaning police would be able to locate every new car on the road.

Every time you get in your car and drive on a public road, the chances are your movements are being recorded. Whether you are crawling through city traffic, cruising down the motorway or parked at the side of the road, a network of cameras could be tracking you. And if those devices are doing their job properly, you won’t even know it.

The past four years have seen an explosion in the number of cameras using automatic numberplate recognition (ANPR) software. These can scan a car’s numberplate and send the details to a central computer along with GPS co-ordinates of where the car was spotted. The information is stored for two years before being deleted.

These cameras, which are fitted to many police patrol cars as well as at sites on the side of the road, capture and store around 18m numberplate readings every day. The AA estimates that around 9m vehicles are on the road on any given day, meaning that even allowing for duplication, every journey made in Britain is potentially being logged.

The level of surveillance is set to rise further. Mobile surveillance vehicles with cameras inside or on the roof patrol our streets in growing numbers, collecting images of every moving or parked car they pass.

These are used by the Driver and Vehicle Licensing Agency to check vehicles are taxed, and by councils to catch motorists who have parked illegally — a practice that could soon be banned. They are also used by bailiffs, who scour the streets for drivers with unpaid debt.