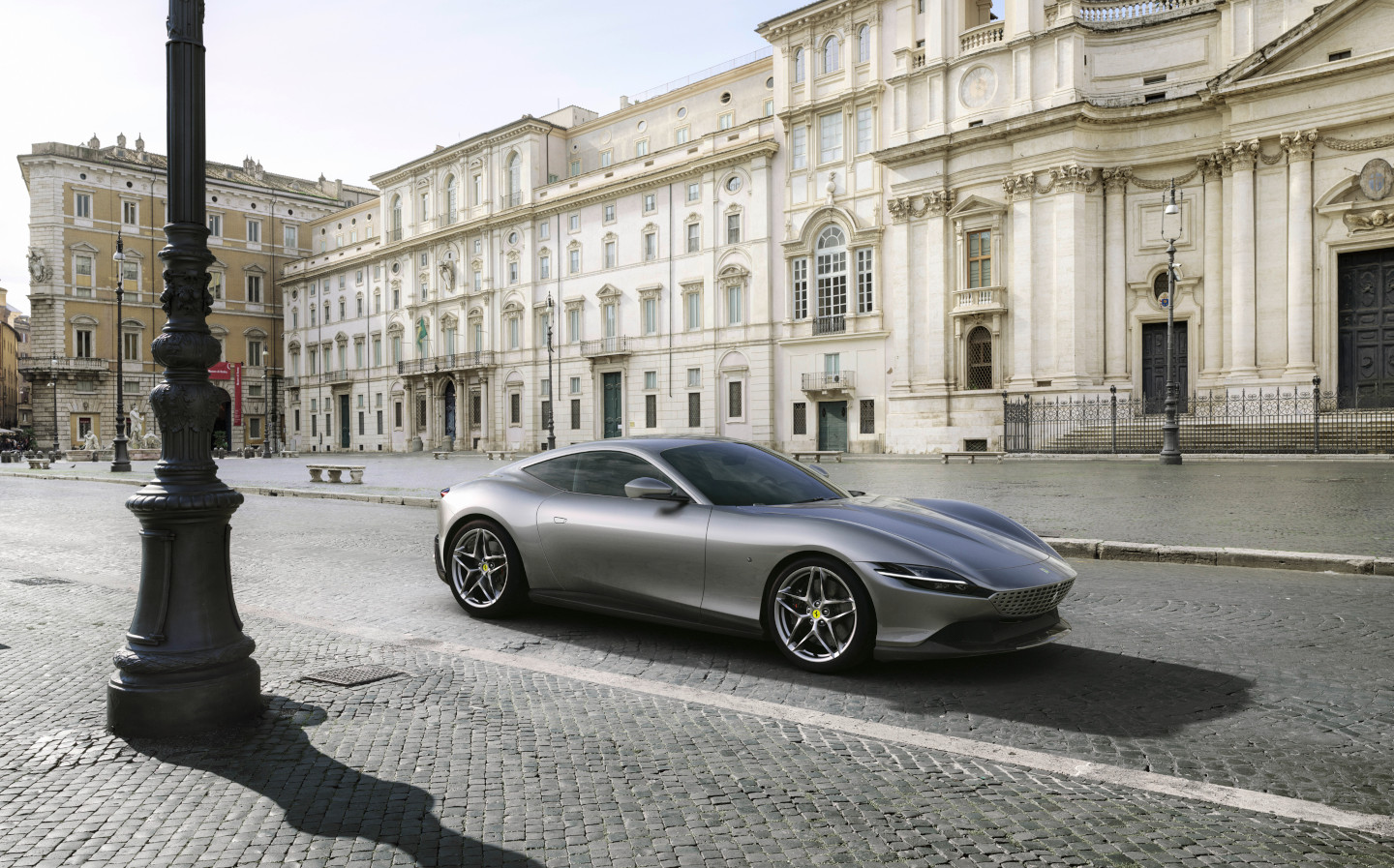 THE NEW Ferrari Roma is Maranello’s first car in a long time that is actually fun to drive on British roads, according to Jeremy Clarkson.

The Sunday Times motoring writer has not been a fan of the prancing horse’s offerings in recent years, branding the company a “hatmaker” and saying its cars are too big, wide and powerful to be used on the twisty, bumpy roads of the UK.

While Clarkson reckoned some recent Ferraris to be excellent machines — the GTC4 Lusso T, which replaced the non-suffixed model’s “cumbersome” V12 with a more exciting V8, was “wonderful”, while the 488 Pista was “not brilliant. . . It’s way beyond that” — many have also made his fear for his life. 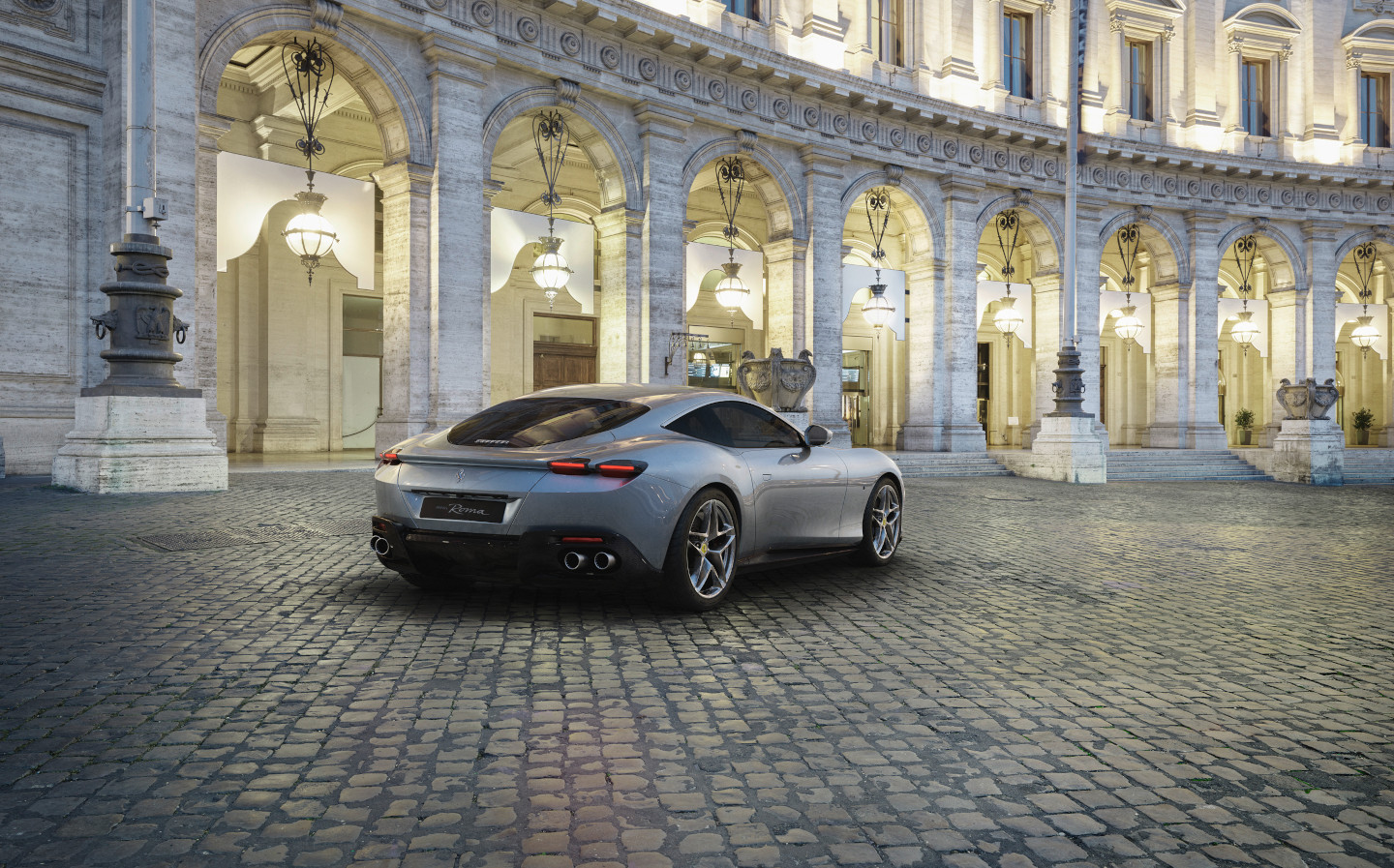 In a memorable review for Top Gear in which he modelled a tennis headband a la Andre Agassi, the writing and TV presenter said the F12 would be better with “less power”, and later said that he emerged from the car “with a white face and what looked like the onset of Parkinson’s”.

The 812 Superfast meanwhile, is even more powerful than the F12 — not a good thing — and in today’s review he compared the 812 GTS to “trying to ride a cow through your local antiques shop”.

The Roma, then, should be the Ferrari that Clarkson has been waiting for. Its V8 puts out 177bhp less than the 812 GTS’s screaming V12, and the body is described in the Sunday Times review more than once as “small”. That’s despite the Roma being only 1mm shorter than the 812 Superfast, and actually 3mm wider, which perhaps says quite a lot about its less furious road manners. 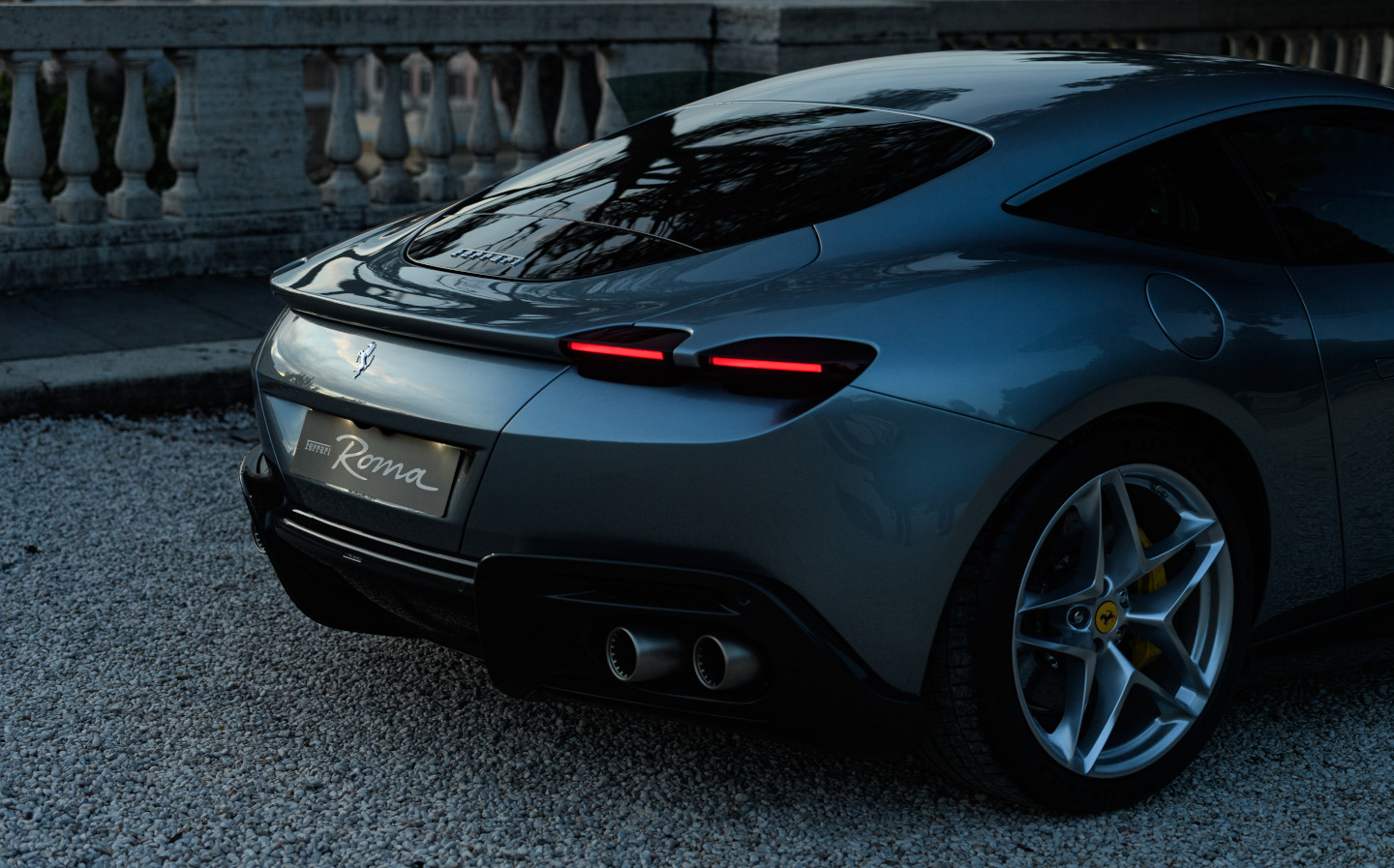 Controversially, Clarkson also likes the way the Roma looks. Various motoring journalists have compared it to an Aston Martin, though Clarkson disagrees. However, he does concede the Ferrari looks much like a Jaguar F-Type but adds, “Isn’t that like saying about a woman: ‘The trouble is she looks too like Alicia Vikander’?”*

The most important thing about the Roma, according to Clarkson, is that when he got behind of the wheel and put his foot down, he felt the “Ferrari magic”, a multisensory experience that he compared to being submerged in a vat of dopamine. 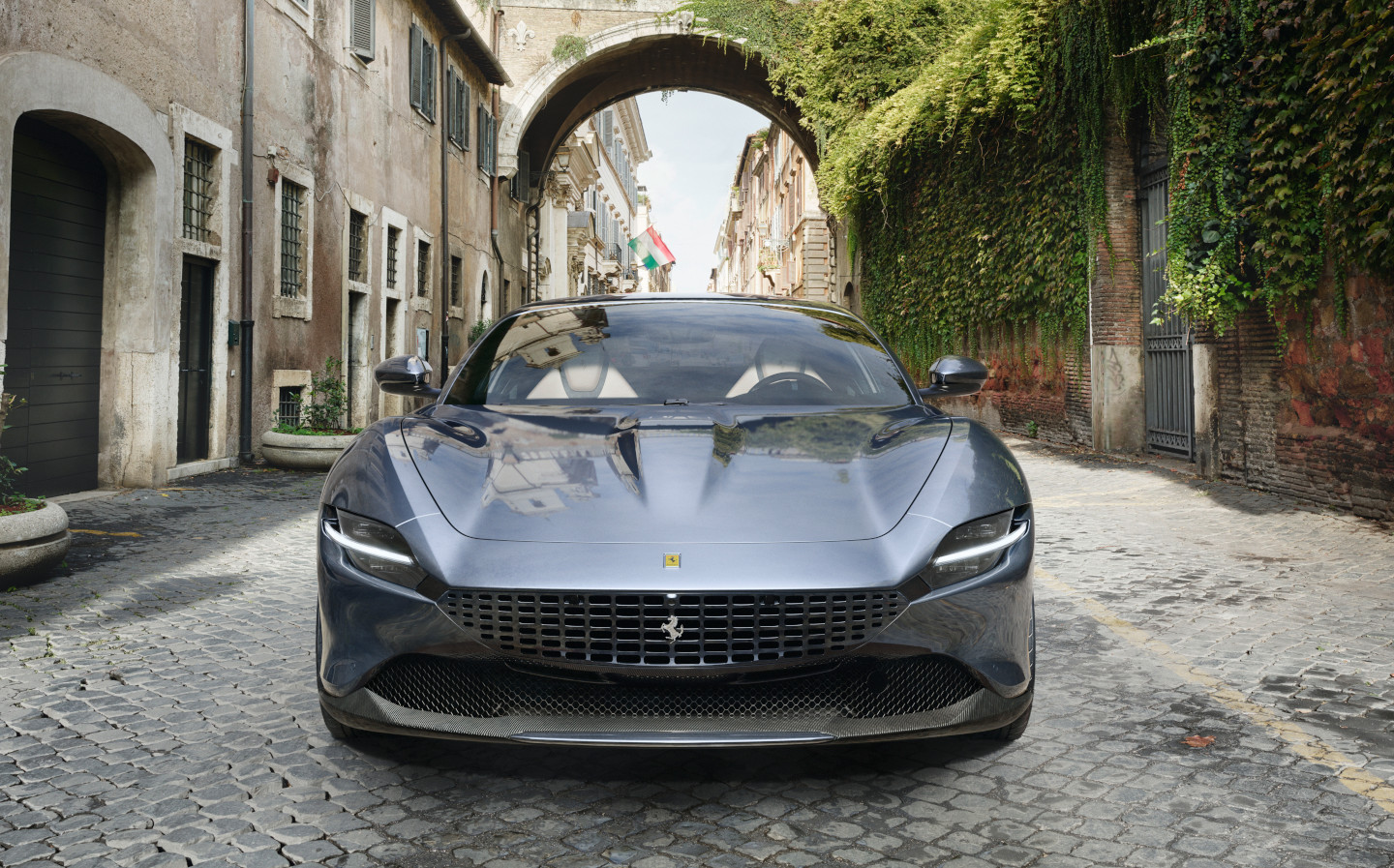 Its more moderate — but definitely not lacking — horsepower and torque figures are actually usable on the back roads of the UK, Clarkson argues, allowing you to reach further into the Roma’s reserves, rather than paddling in the shallow end, as has to be done with Ferrari’s V12 cars, resulting in a “car that tickles your tickly bits”.

Thanks to its front-engined layout (classic Ferrari, he argues) it’s also more practical than some of Ferrari’s other models, he said, with a satisfactory boot and rear seats that, while not suitable for adults, are sufficient “for smaller stuff. Babies, for example”. 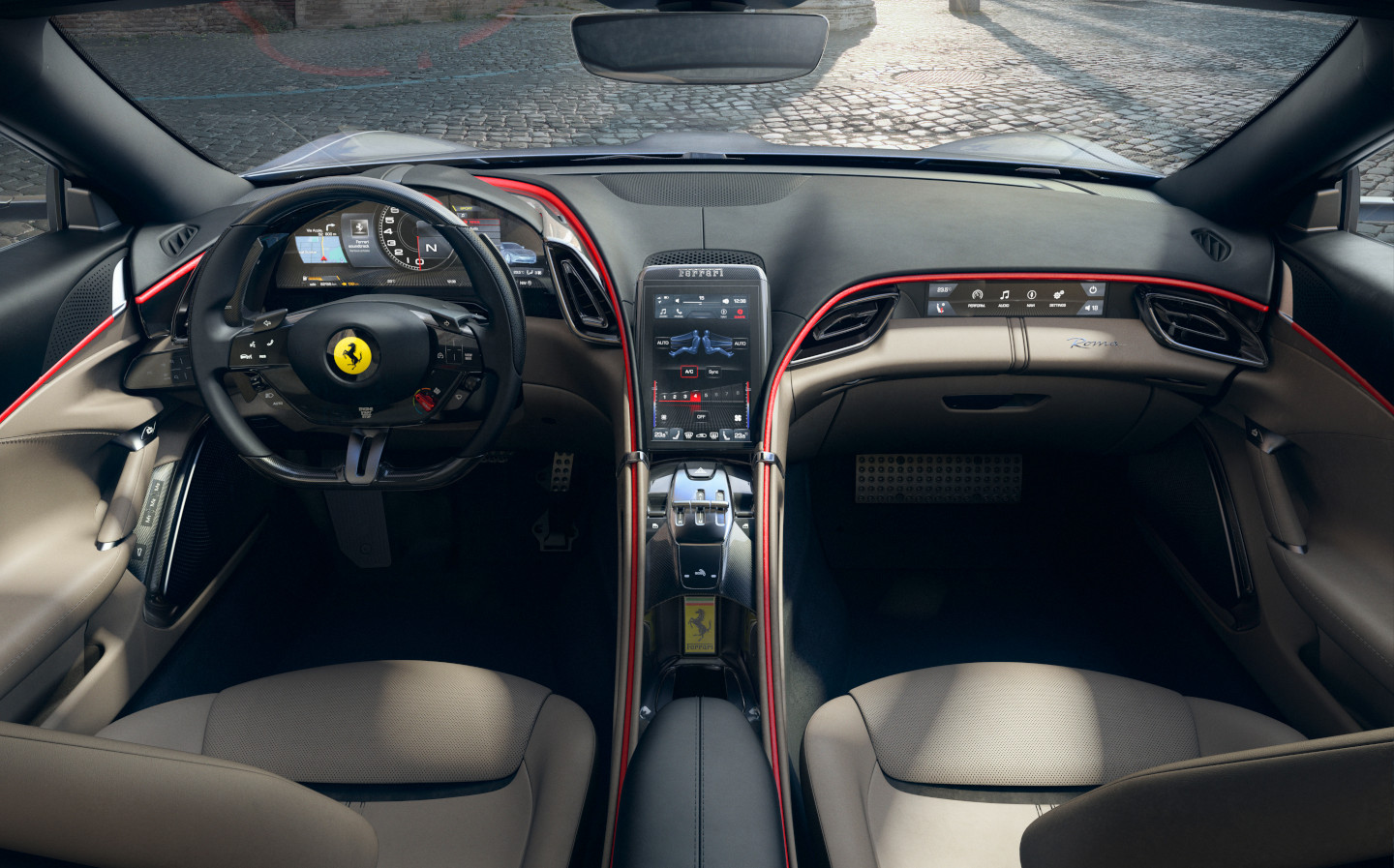 He also didn’t mind the Roma’s fiddly ergonomics, as some reviewers have. However, he took serious issue with the seats, which he said offered no support and made him feel like he was sat on top of them, rather than in them.

Furthermore, in true Ferrari style, the options list charges inordinate amounts for the smallest of things: a carbon fibre rear diffuser is £6,720; two tone leather is £4,800; foldable rear seats — standard on almost every car that has more than two seats — are just shy of a thousand pounds. In fact, he said, although the Roma’s starting price is £170,000, the car he drove was a staggering £230,000.

Mind you, it is a Ferrari.

You can read Jeremy Clarkson’s full review of the Ferrari Roma on the Sunday Times website, or in today’s Sunday Times Magazine.

* This is not the first Ferrari review in which Clarkson has referenced the Swedish actress.