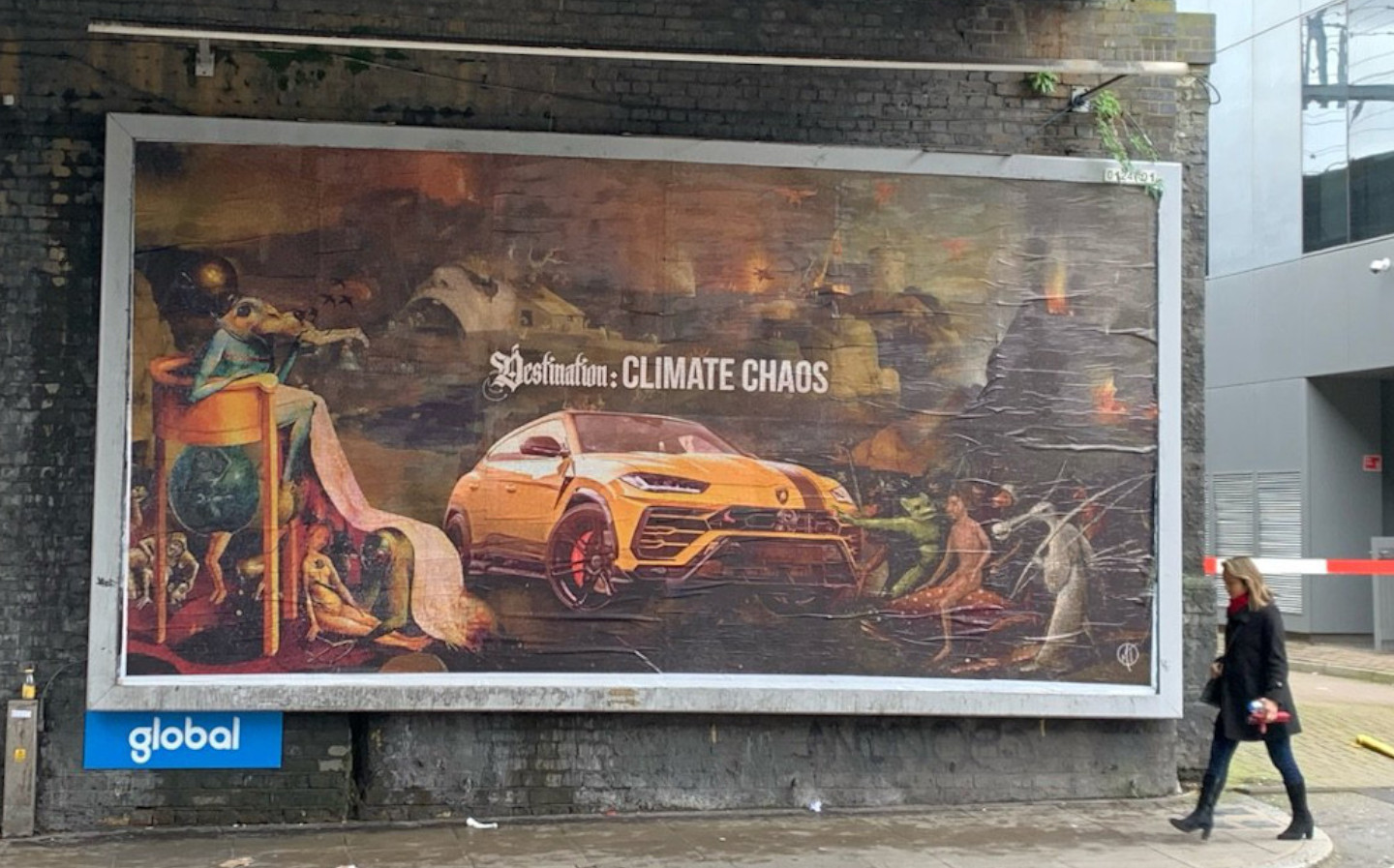 ENVIRONMENTALISTS belonging to the activism network Brandalism have installed over 100 billboards across the UK that criticise the car industry for what it calls “misleading adverts that have driven up demand for polluting vehicles”.

The “guerilla” billboards, which have been installed without permission, call out specific carmakers including BMW, VW, Range Rover, Lamborghini, Ford, Vauxhall, Citroën and Infiniti. They have appeared in cities including Bristol, Birmingham, Cardiff, Leeds, London and Exeter.

The pieces, created by a network of artists, criticise the industry for advertising that has resulted in “increased carbon emissions from road transport and worsening air pollution and congestion in towns and cities.”

Brandalism has coined the phrase “subvertisements” to describe the style of protest. Many of the artworks imitate real car adverts, with one featuring a BMW X5, using the effect of two posters ripped together, displaying epithets such as “embrace the traffic jam” and “driving you into a climate crisis.”

Another uses the style of Dutch master Heironymous Bosch, famous for his monstrous hellscapes including The Garden of Earthly Delights, depicts a Lamborghini Urus in a Bosch-esque scene with the phrase “Destination: Climate Chaos.” The campaign puts SUVs specifically in its crosshairs, and in its press release references efforts by other environmental groups to place restrictions on the production of SUVs. 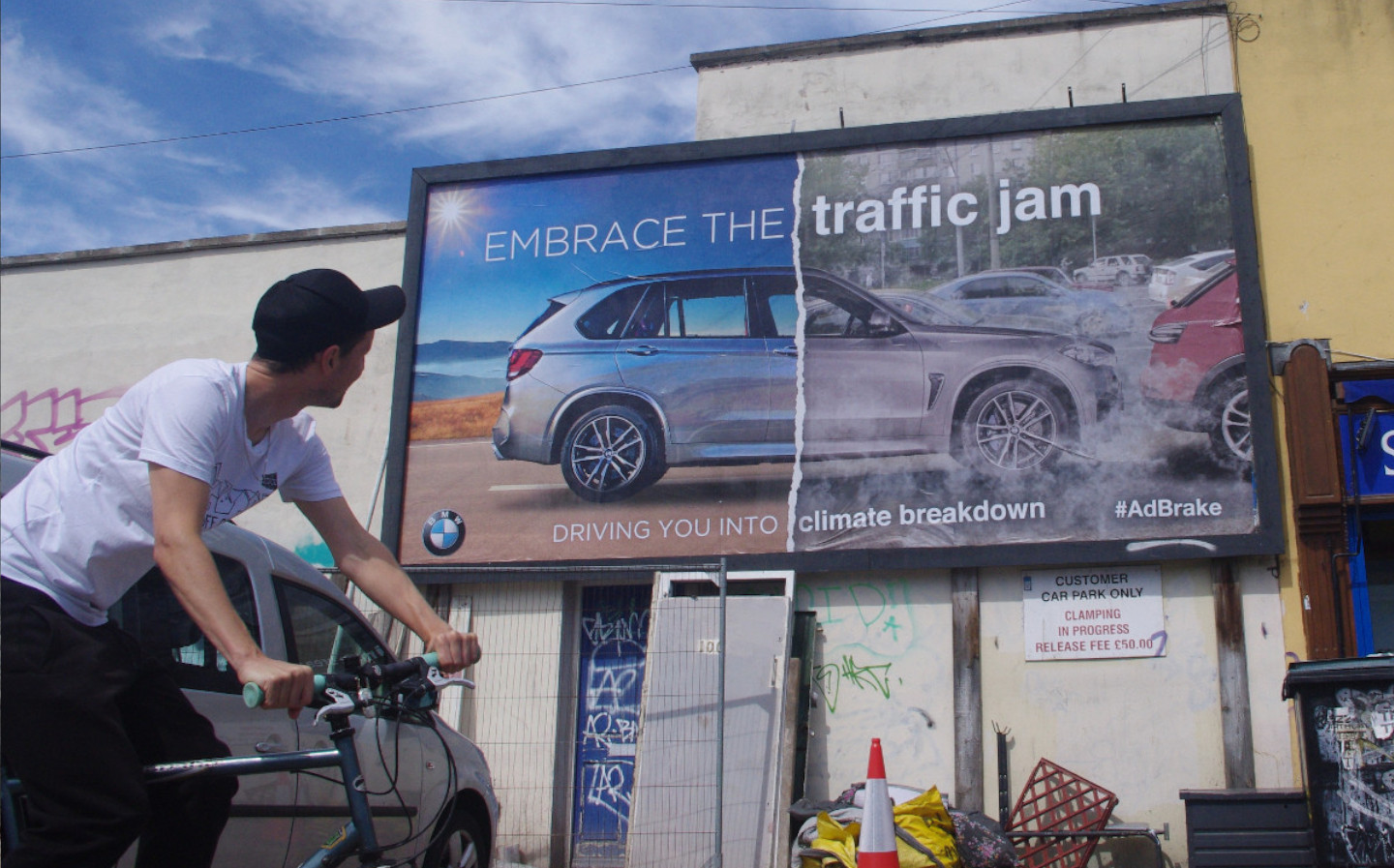 A recent study by think tank The New Weather Institute, cited by Brandalism, called for a tobacco-style ban on SUVs, arguing that their popularity was jeopardising the UK’s ambition to be carbon-neutral by 2050. It specifically called for a ban on cars with average carbon dioxide emissions of 160g/km or over and cars over 4.8 meters in length. This would include the dirtiest third of cars on UK roads.

Brandalism is an anti-capitalism network founded in 2012, whose rather lyrically worded declaration specifically targets “the machines of predatory corporatism, that block out the sun [and] burn our atmosphere”. Previous projects have targeted oil companies like Shell for the perceived hypocrisy of its renewable energy initiative adverts. It also installed 600 “subvertisements” across Paris during the COP21 United Nations Climate Change Conference, which took place in the French capital.

Some on social media have praised the campaign for drawing attention to issues around car advertisements. However, some have pointed out that driving remains a necessity for many people who do not live in areas with sufficient public transport links. One user pointed out that some “rural communities across the UK have such poor public transport there’s often no option but to drive to work”, while another told the campaigners to “check your city-centre dwelling privilege”.

The people who designed these posters…are they aware the rural communities across the UK have such poor public transport there’s often no option but to drive to work?

Mike Hawes, Chief Executive of the Society of Motor Manufacturers and Traders (SMMT) said that the artworks targeted those who rely on cars for essential travel: “Today’s cars are the cleanest in history, with industry delivering huge reductions in emissions after investing billions in advanced technology for all fuel types. To make real strides in improving urban air quality, fleet renewal is the key – not needlessly insulting millions of ordinary people who rely on cars for essential mobility.”

Due to its liberal use of carmaker’s names, images and trademarks, the campaign could also find itself vulnerable to legal action, but Peter Marcuse, founder of Brandalism, seemed undeterred in an interview with The Drum, a marketing and advertising industry magazine. He said: “They are the big dogs and we are aware of it. But we’re quite happy to take them on. We take courage from previous campaigners who have taken on the big corporates, like the McLibel case in 1990.”

The “McLibel” case references a campaign by environmentalists against the fast food chain McDonalds in the nineties, resulting in a decade-long legal battle.

In a press release, Marcuse said: “Our towns and cities have become so dominated by private cars that we’re struggling to implement sustainable alternatives as the health and social costs mount. The active promotion of polluting vehicles through advertising campaigns isn’t helping the situation. We need a cultural shift away from cars.”