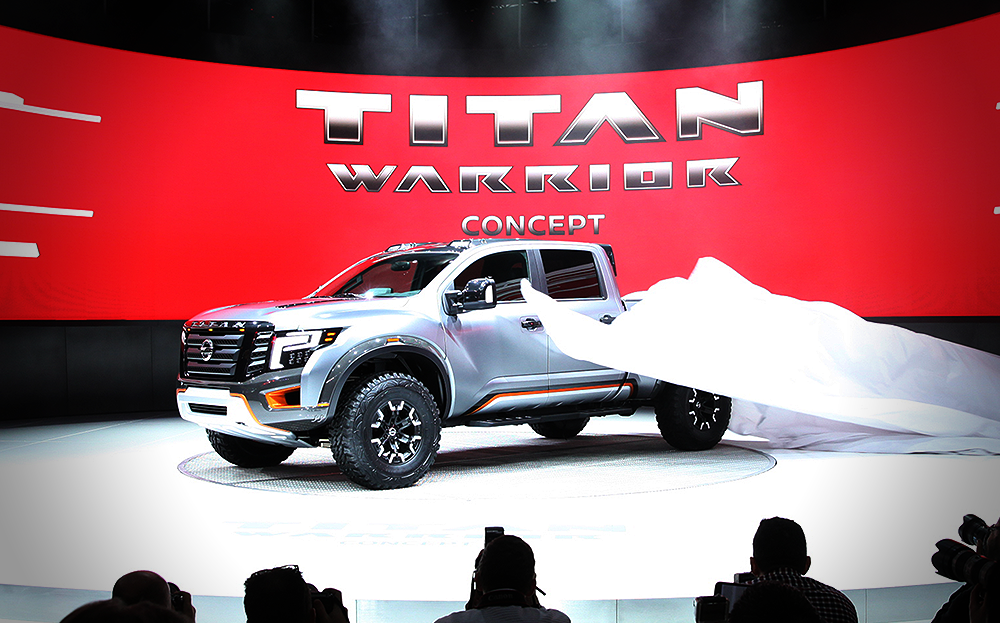 PRETTY much at the centre of the 2016 Detroit motor show was a monster. Nissan called it the Titan Warrior, standing almost 7ft tall and clad in what Nissan described as “modern armour”, this was the pick-up truck to beat all trucks, a sign that big is back in Motor City.

Barack Obama is due to visit the North American International Auto Show (NAIAS), as it is known officially, this week — the first time he will have been there since becoming president — amid signs that the show, and the city, is getting its mojo back.

For the first time in years, and certainly since the city of Detroit declared bankruptcy in 2013, the taxi drivers at the airport talked about a recovery in full swing. A handful of cranes had returned to begin building in the city centre again. The suburbs are still littered with abandoned homes and decaying factories, but investment is returning to the town. 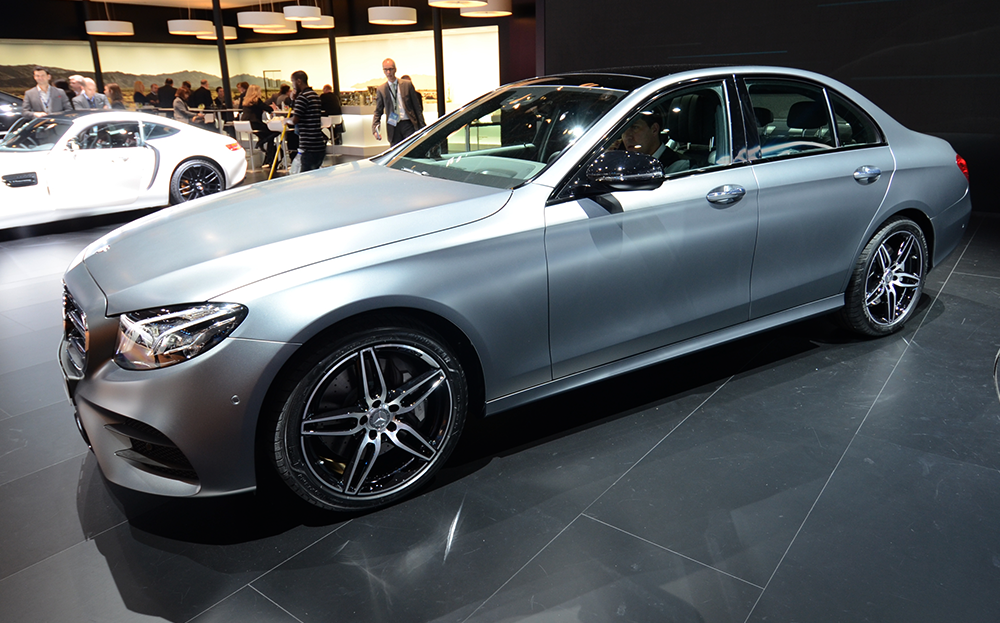 And so are the big car launches. Mercedes chose to unveil the latest version of its most important model at the show: the E-Class, which will arrive in showroom this summer, costing from around £35,000.

We showed pictures of the car last week, after they were leaked, but this was the first opportunity to get hands-on with its hi-tech cabin and the dashboard that makes a mockery of your widescreen TV. The display stretches from the driver’s window (almost) right across to the glovebox, although it’s actually made up of two screens, and will be standard on all but entry-level cars.

It can be controlled with a single rotary dial, as featured on other Mercedes, but the menus can also be accessed by using touchpads on the steering wheel. It’s impressively smooth and the software gives quick access to a list of options that seems to rival Encyclopaedia Britannica for length, including the choice of 64 different shades of mood lighting. The only glitch was that the pre-production models on display operated with a slight delay between pressing a button and the option being selected. 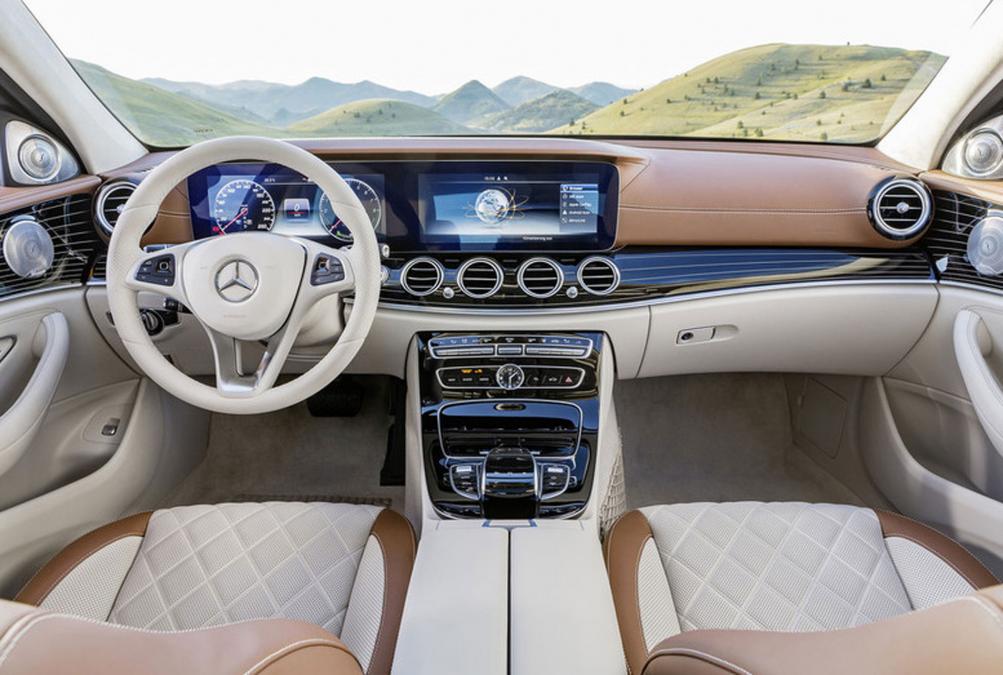 Detroit also brought more details on the car’s apparent artificial intelligence. Most of the models sold in Britain will be fitted with the ability to communicate with other new E-Classes. Vehicles with sat-navs featuring live traffic data will send details of their speed and any skidding (as recorded by the stability control system) to a central data cloud, which can then forward on warnings about slow traffic or slippery conditions to other vehicles.

The E-Class is claimed to be the first driverless production car in the world, with a licence from Nevada which will allow test drivers to operate the car in a fully robotic mode, even when there are no lane markings — it can follow the track of the car in front at speeds of more than 70mph.

The E-Class is claimed to be the first driverless production car in the world, with a licence from Nevada which will allow test drivers to operate the car in a fully robotic mode

Software installed on standard production cars will force motorists to keep their hands on the wheel, but the company is planning to update the cars after they leave the showroom to take advantage of newer software and forthcoming law changes. These could enable the driver to take their hands off the wheel during motorway driving and the car to recognise traffic lights.

For the foreseeable future, drivers will have to activate lane changes by clicking the indicator: the E-Class will then steer itself into another lane. In the UK, a similar system on the Tesla Model S is already available although,  due to tighter regulations, it requires the driver’s hands to rest on the wheel at all times.

Virtually every manufacturer in Detroit was talking about wrestling control of the steering wheel from drivers. Nissan said that it would have a car capable of changing lanes by itself from 2018 — it has not yet decided whether the car will do this without any driver input at all.

Volvo showed its prototype dashboard, which had a giant screen behind the dashboard which — in James Bond-style — flipped over when the car was in driverless mode, so occupants could watch TV or check social media.

Audi also showed a digital dashboard display, designed for future driverless cars, which showed the area around the car. It’s designed so that the driver can immediately see that their vehicle is aware of everything around it so that they’ve got confidence that it is not about to crash itself.

But it was Ford’s stand at the show — just ten miles from the company’s headquarters — that was fizzing with ideas. The Blue Oval claimed to be the first company to test a driverless car in the snow, which can obscure sensors and cover lane markings.

In a presentation at a vast amphitheatre next to the show building, Ford also announced a trial that will allow up to six people to share a car lease deal and split the cost according to the mileage that each covers. 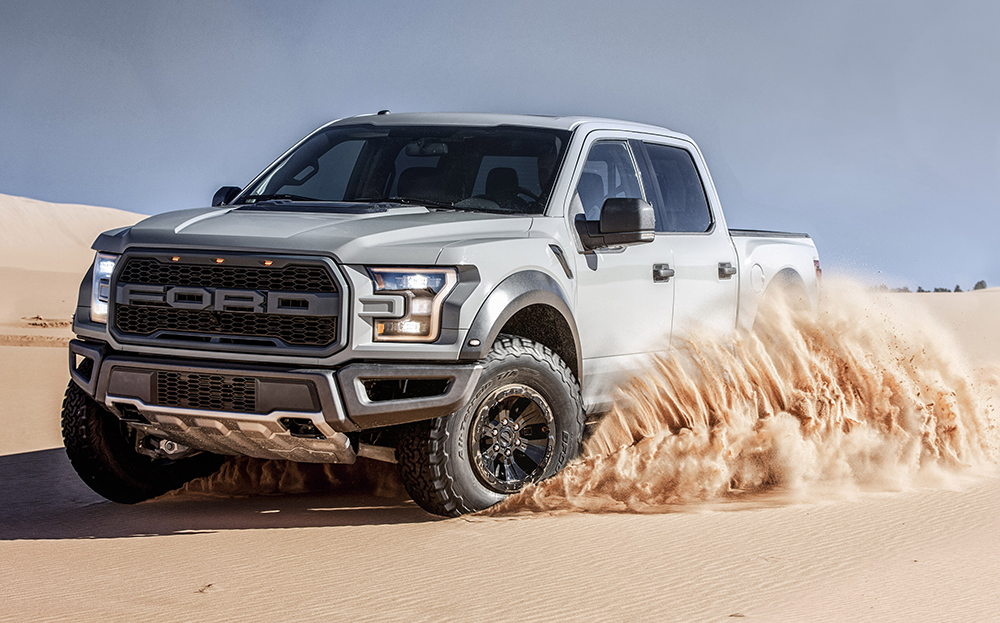 But its big unveiling was the latest, fire-breathing incarnation of its pick-up truck. The four-wheel-drive 2016 Ford F-150 Raptor Supercrew packs 411bhp and is claimed to be able to take your family off-road at up to 100mph. It won’t be sold here in the UK, though, as it’s too vast for our roads.

The F-150 Raptor Supercrew and Nissan’s Titan concept were among a handful of big, tough and powerful pickups on show but beauty outweighed the beasts — in quantity, at least — as a bevy of sleek, luxury coupés made their debut.

The Infiniti brand is still virtually invisible in Britain, despite a hefty advertising budget and sponsorship of the Red Bull F1 team, but the new Q60 could be the car to change all that. In a word, it’s stunning. 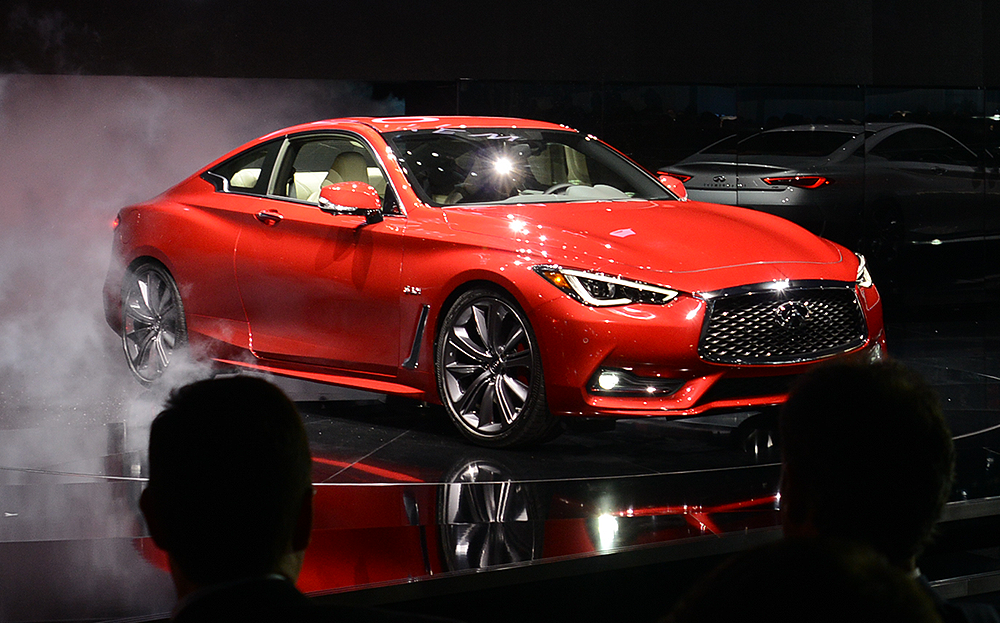 The styling is elegant but with muscular bulges in the right places that hint at the 400bhp V6 engine underneath the bonnet. It goes on sale in November, with a likely starting price of £30,000.

Not to be outdone, Japanese rival Lexus revealed the LC 500, which is chiseled, lean and beautiful, but with a protruding grille that evokes attitude. The concept was first unveiled in 2012 but Lexus has decided to build it seemingly without any changes to the exterior, which required some “blue sky thinking” on the part of its engineers, who were tasked with fitting its suspension into the narrow gap between the top of the wheel and the bonnet. 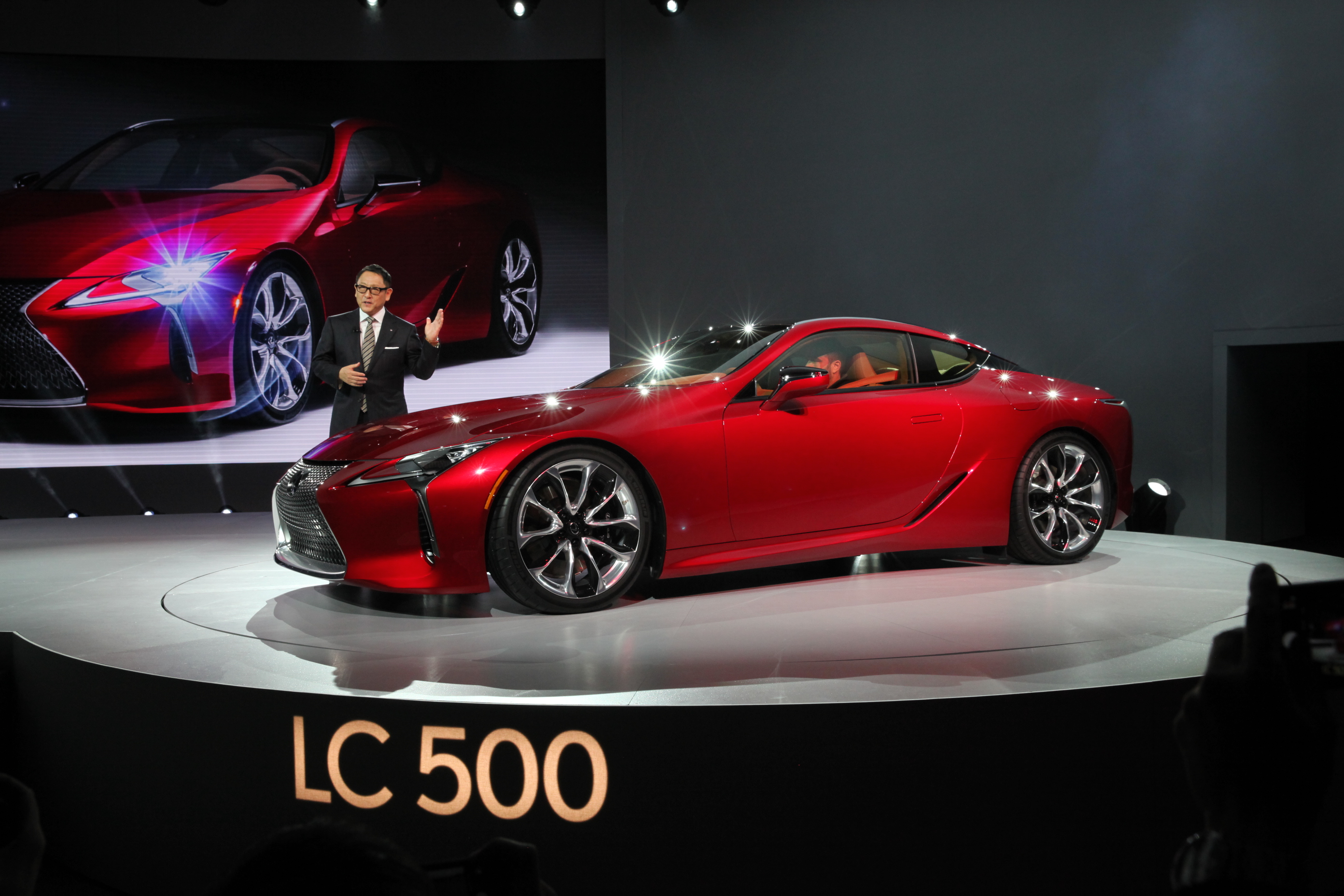 Sadly, the interior is a typical Lexus mess, but the leather lining should make it comfortable, as you would expect given the likely price tag of £75,000. Read more on the LC 500 here.

Buick decided to join the sports coupé party too. The General Motors-owned brand has recently been known for selling a dull range of rebranded Vauxhalls (which is also under the GM umbrella). 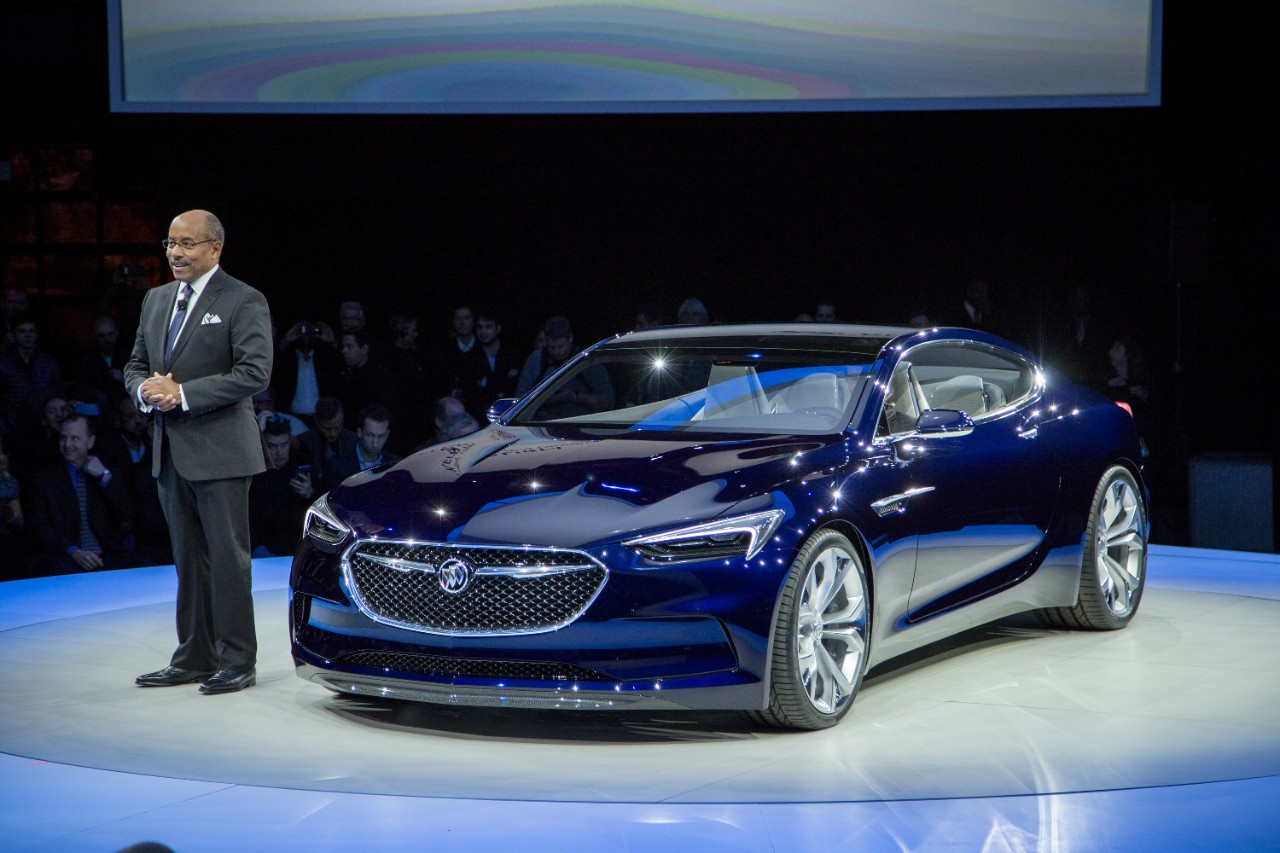 However, at Detroit it revealed a stunning new concept called the Avista, with a V6 engine under the bonnet. If the company decides to put it into production, there’s a tantalising chance it could be sold in Britain as a Vauxhall, too.

But there are a host of models that we won’t get, such as the Dodge Challenger SRT Hellcat — newly available with go-faster stripes. It looks as if it should be in Wacky Racers, but there’s nothing comic about the 707bhp produced by its supercharged V8 engine. And the price is a shade over £40,000. 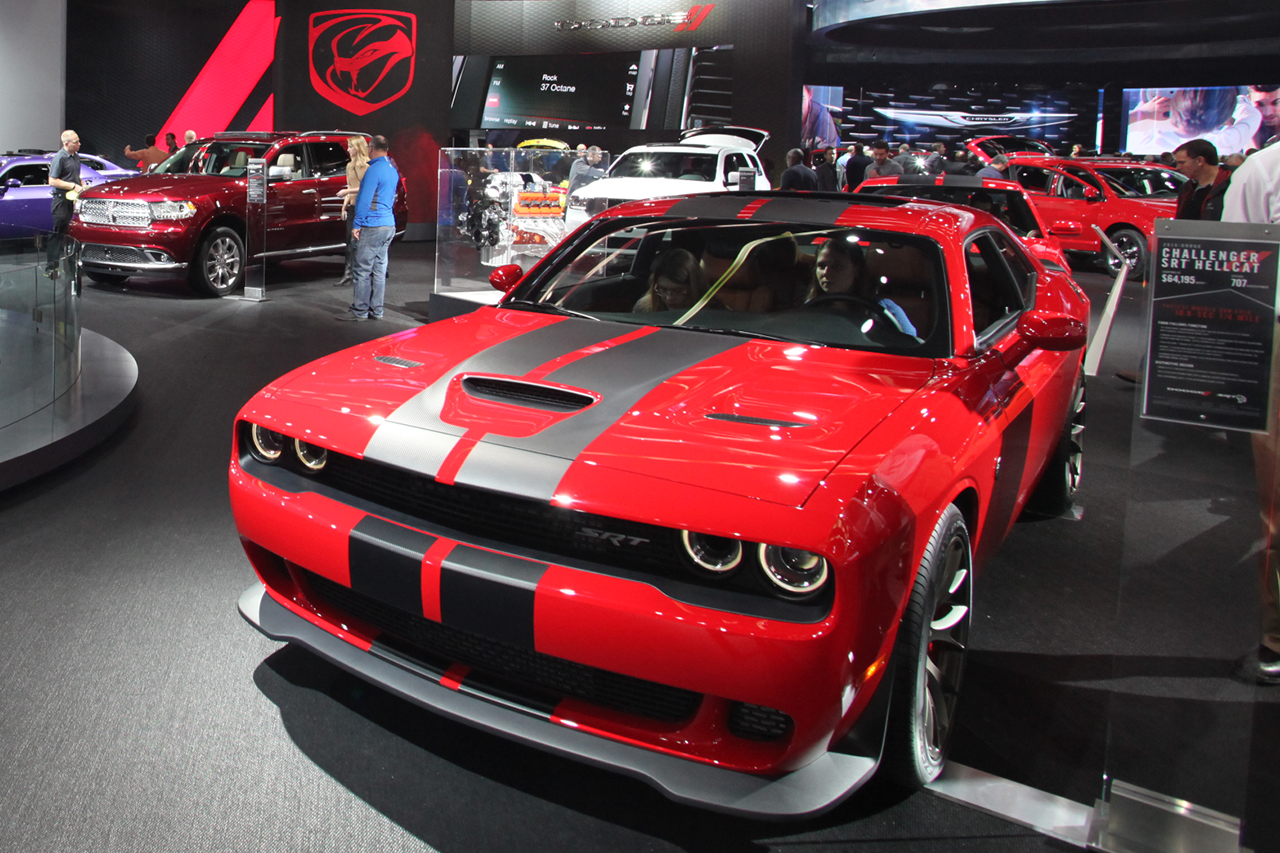 Then there’s the Chrysler Pacifica people carrier which offers the holy grail of seven seats plus a decent amount of luggage space. There’s even a display available for rear-seat passengers that shows when they are due to arrive: so there’s no need to ask, “Are we nearly there yet?”

But it’s too big for Britain, said Chrysler, which is a moot point as the American fondness for the brand never transferred across The Pond; in May last year parent company Fiat Group announced it was withdrawing Chrysler from the UK. 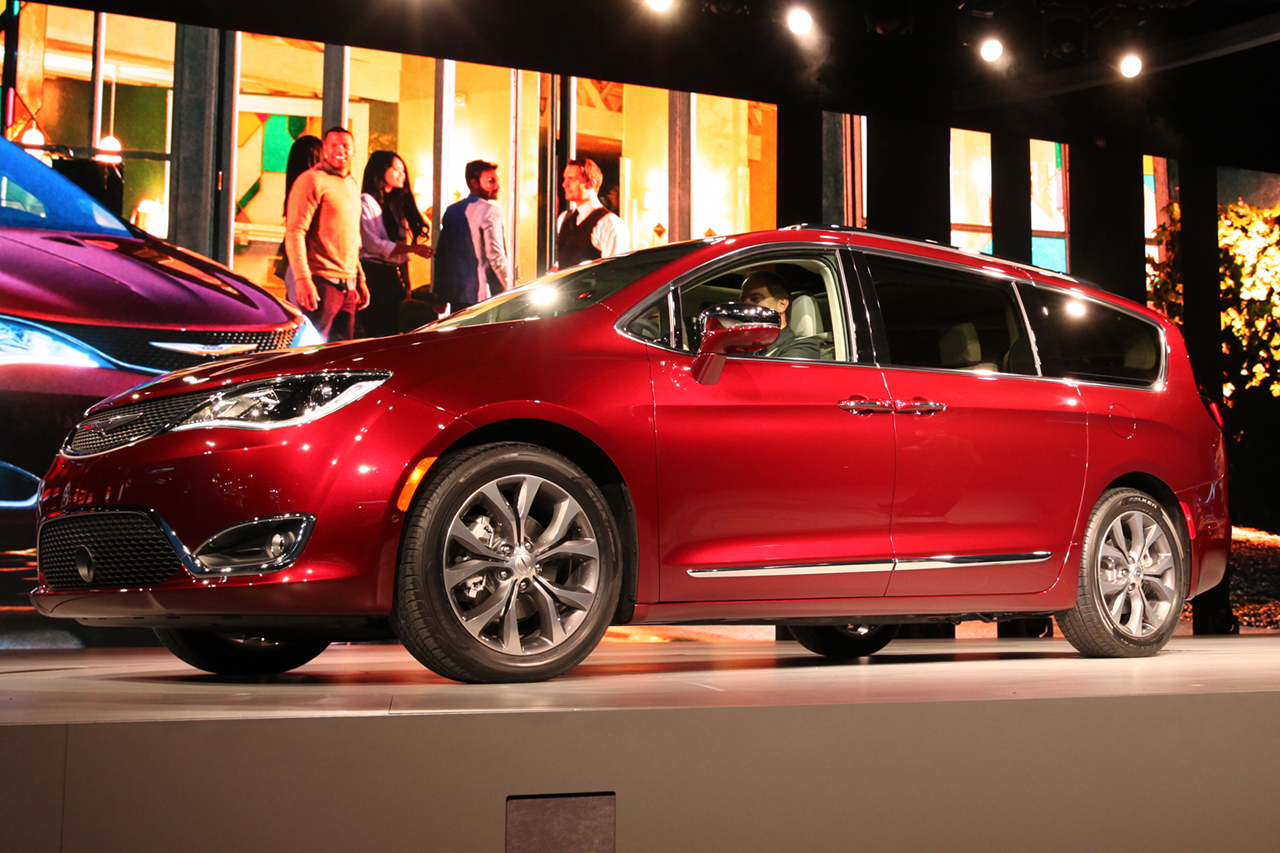 Hydrogen cars’ revival continued in Detroit, too, despite a long road to a suitable refuelling infrastructure; even the most optimistic estimates suggest that there will only be 65 refuelling stations in Britain by 2020.

Audi plans to build hydrogen cars, anyway, and the Audi h-tron quattro concept SUV is likely to be its first, arriving as early as 2018. A fuel cell uses hydrogen to make electricity, which in the h-tron powers a motor at the front and another at the back. Total power is equivalent to 308bhp. 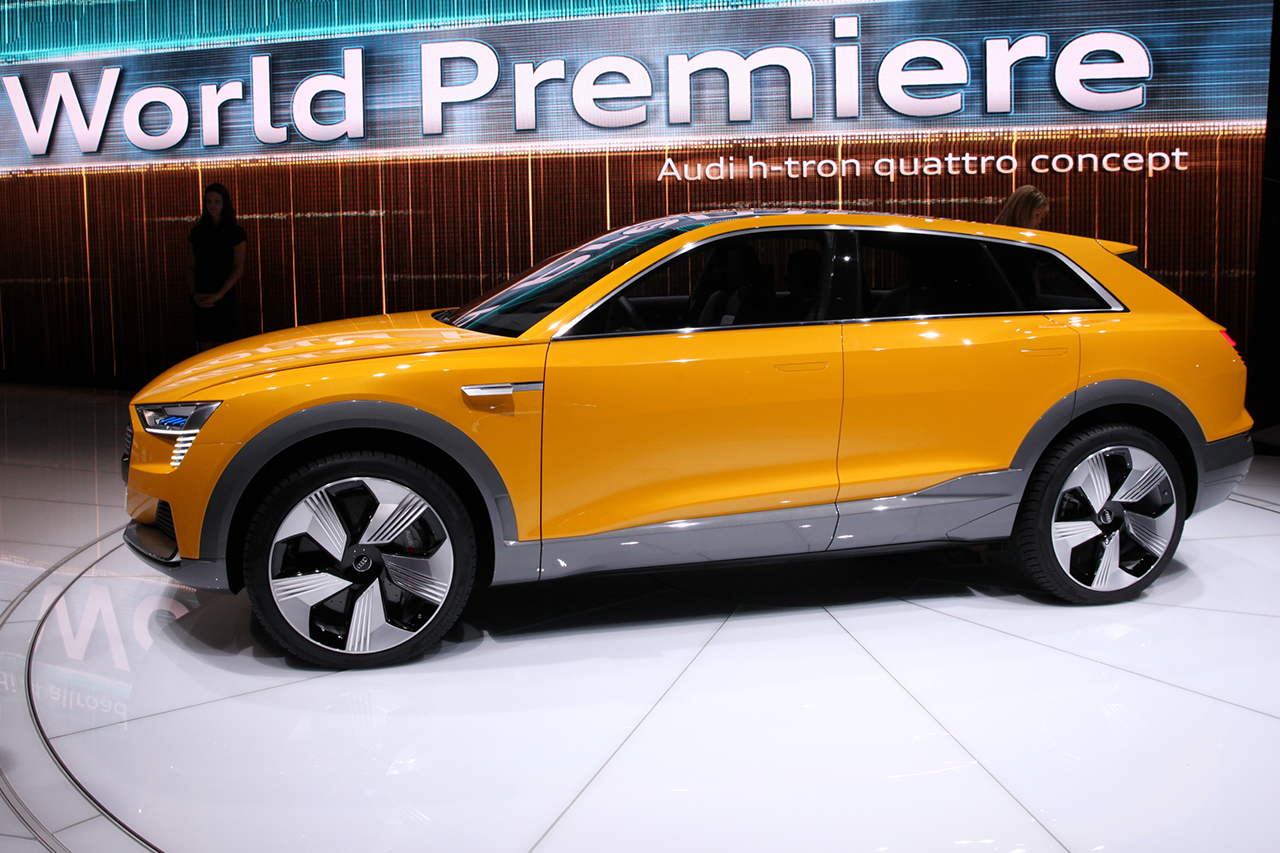 A four-minute fill up is claimed to give a range of 373 miles, helped by a solar panel on the roof, which generates enough electricity to add a handful of extra miles. The fully digital interior with five screens looks futuristic but can’t be far away: the latest Audis with digital dashboards are already halfway there.

Back to basics, and on-sale in Britain from April, in left-hand drive only, is the Force One supercar from a new company called VLF. It has taken a Dodge Viper, stripped it down, tuned the V10 engine to produce 745bhp and fitted racing suspension and a carbon fibre body. 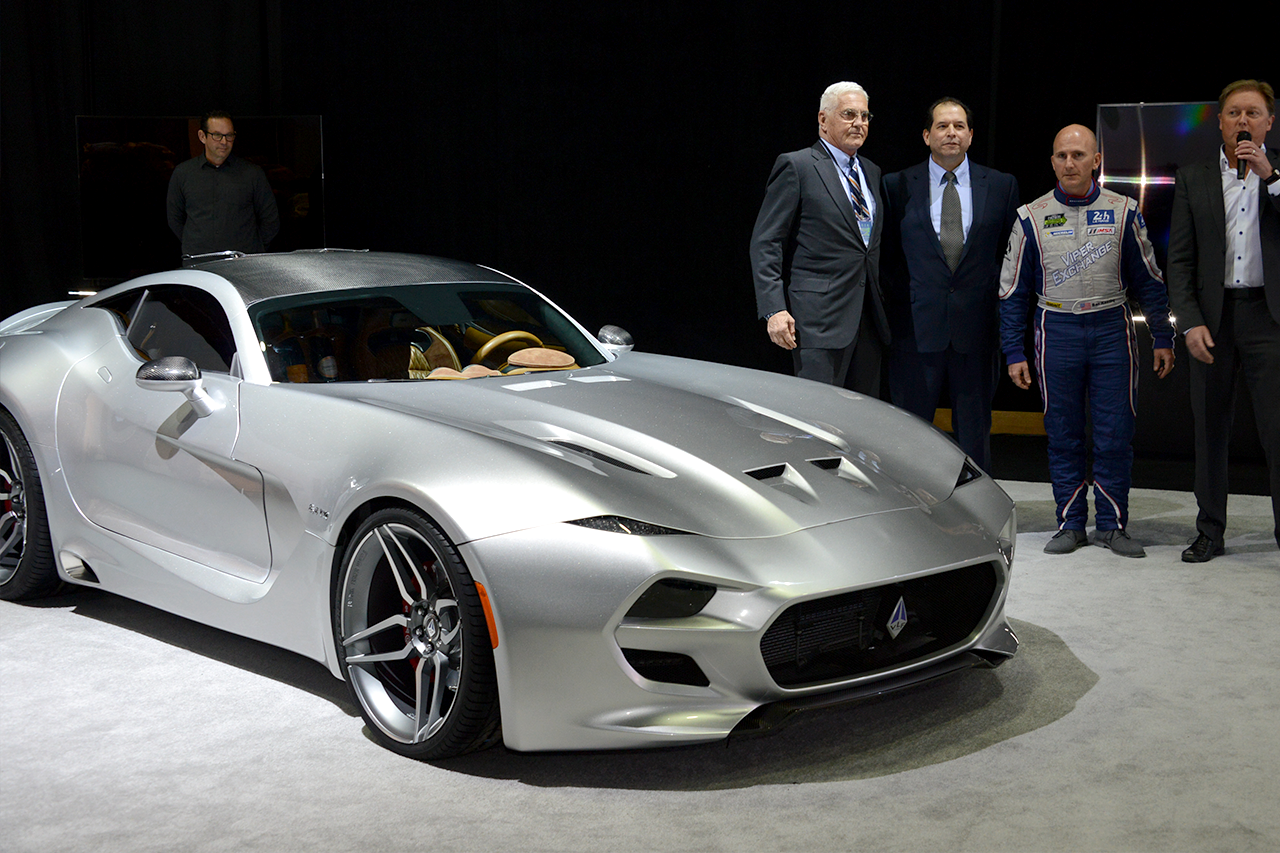 Its designer, Henrik Fisker, was behind the failed Fisker Karma extended-range electric car project but he’s bullish about his new project, describing it as a “raw supercar” that goes back to basics without any of the hybrid technology used in the fastest Ferraris and McLarens.

“Why would you drive a plug-in hybrid supercar?” he said. “You can’t eat salad all the time, you want a steak once in a while. This is the steak. There’s not even a salad leaf under it.”