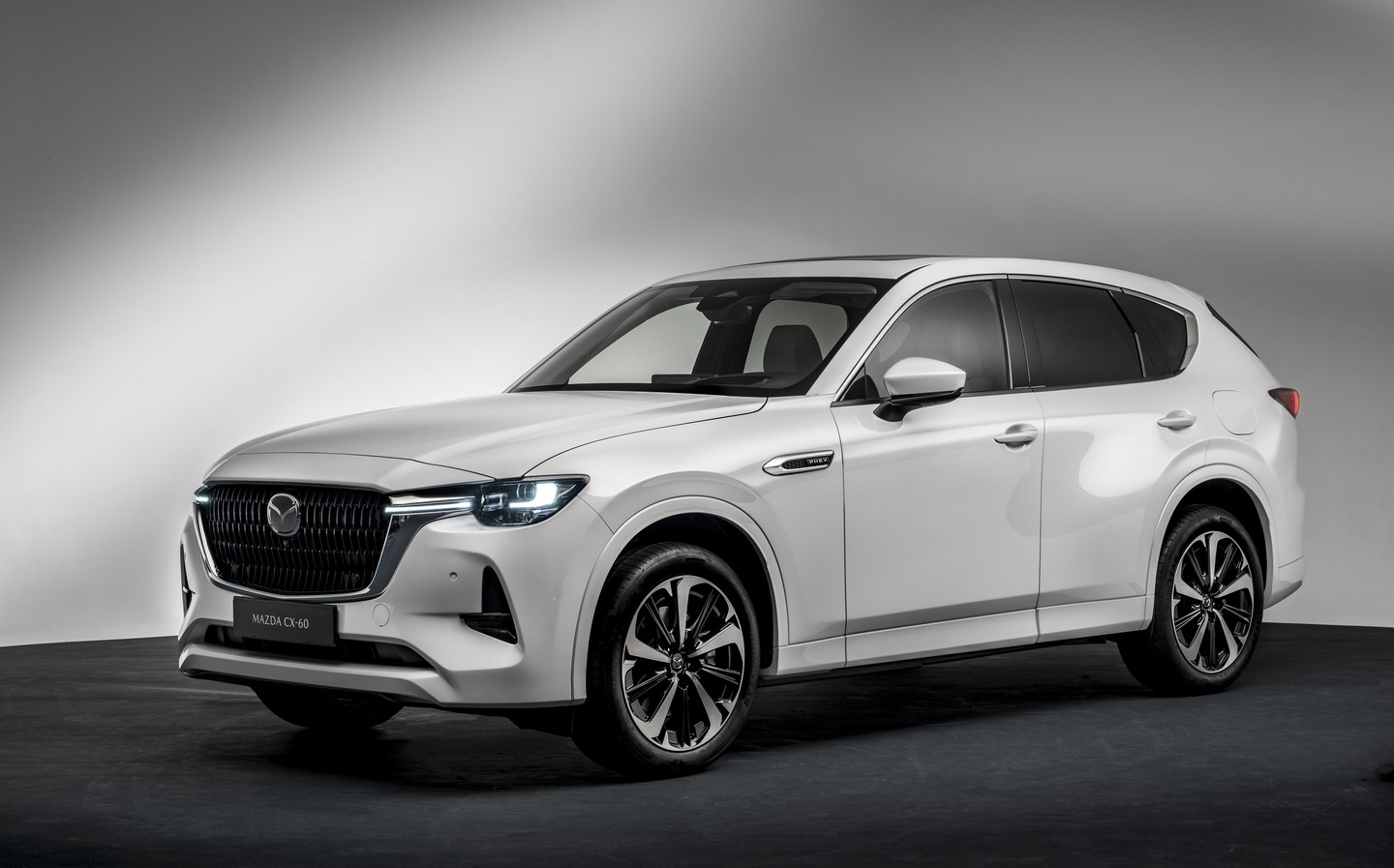 Mazda has taken the wraps off the CX-60, an all-new SUV designed to top the Japanese manufacturer’s range and take the fight to premium models from Audi, BMW and Mercedes. It launches in the UK later in 2022 powered by Mazda’s first ever plug-in hybrid powertrain.

The CX-60 is bigger in every direction than the Mazda CX-5, though it retains a five-seat layout. The focus is on luxury, quality and tactility rather than family-carrying capacity.

Inside, Mazda is keen to align the CX-60 with traditional Japanese craftsmanship, referencing Hacho and Kakenui processes, though it attempts to meld that with contemporary technology.

In front of the driver is a set of large digital instrument panels, supplemented by a big head-up display. Eschewing the trend for ever-larger portrait-oriented touchscreens, Mazda has fitted a relatively shallow 12.3in central display – and it’s operated by a rotary wheel on the centre console.

Physical buttons for the climate control system have been retained, too.

It’s not missing any connectivity tricks, though, with wireless Android Auto and Apple CarPlay both featuring.

Debuting in the CX-60 is new facial recognition technology for setting the driver’s seating position. The Driver Personalisation System comprises three functions: an automatic driving position guide; automatic setting restoration; and ingress/ egress assistance. It stores information for up to six people and adjusts the mirrors, head-up display, audio and air conditioning, too.

Wide-opening rear doors allow access to the three rear seats, with Isofix mountings for child seats in the outer two positions (as is required on all cars by law).

Buyers looking for more seating capacity will have to wait until late 2023 for the arrival of the seven-seat version, due to be called the CX-80. All versions of the CX-60 feature a 570-litre boot.

At launch, the CX-60 will be available as a plug-in hybrid electric vehicle (PHEV). This uses a naturally-aspirated 2.5-litre petrol engine alongside a 100kW electric motor to produce up to 322bhp, making this the most powerful production Mazda yet.

There’s also up to 368lb ft of torque on tap when the motor and engine are working together, enabling speedy get-aways: the 0-62mph time is a claimed 5.8 seconds.

The engine and motor combine with a new eight-speed automatic gearbox, sending power to all four wheels. The system can send up to 100% of the power to the rear wheels, and up to 50% to the front wheels, making it a rear-biased machine. No doubt that will appeal to BMW drivers. Various driver-selectable modes affect the split.

A 17.8kWh battery pack is mounted underneath the cabin floor in the CX-60 PHEV, so as not to impact on boot space. Depending on specification, it will allow for an official electric range of up to 39 miles and ultra-low emissions.

Following on from the PHEV will be two new straight-six engines with 48-volt mild-hybrid assistance. A 3-litre petrol unit bucks the turbocharging trend by using natural aspiration, while Mazda is going large with its diesel offering, producing a new 3.3-litre engine.

The eight-speed automatic gearbox will be standard fit across the range, while the petrol and diesel models can be specified with rear-wheel drive or all-wheel drive.

The Mazda CX-60 is now available to order and the first British buyers should take delivery of the CX-60 by the autumn of this year.