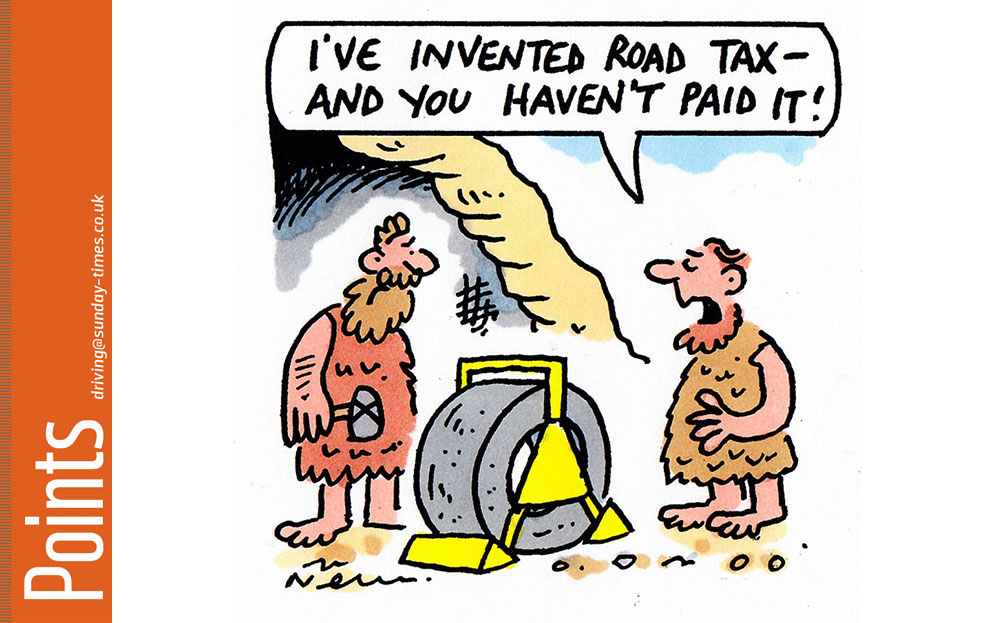 What goes round comes round

If the Driver and Vehicle Licensing Agency database can’t be trusted (“Clamped — because the blundering DVLA said it wasn’t taxed”, last week), I suggest we all renew our vehicle tax at the post office and stick the receipt in a holder on the inside of the windscreen. Don’t tell the DVLA, though — it might start issuing circular receipts and undermine my business plan.

Is it time for The Sunday Times to campaign for scrapping vehicle tax in favour of an increase in fuel tax? Your article highlights the disadvantages of the current system: losing £80m in vehicle tax annually — £45m more than two years ago — should persuade the government to bin such expensive bureaucracy. Automatic numberplate recognition cameras coupled with computer errors cause people huge problems not of their own making.

An excellent report and surely the biggest argument for scrapping vehicle tax and adding 10p to the price of every litre of fuel. Apart from removing the clamping issue, the £80m a year “saved” in unpaid tax would be enough to fund a decent local hospital and at last we’d have a fair system: the more you drive, the more you pay.

When the levy breaks

Brendan Webster’s sad story of the inefficiencies of the DVLA and its extortion of money from him is yet further evidence of the ludicrous nature of vehicle tax levied in the UK. The unfathomable tax bands, exemptions and piecemeal impositions are untenable and merely chart the pathetic political efforts to marry foolish policies on motor vehicles with a need to extract revenue from car owners.

Why can’t the DVLA (or its contractors) issue a warning or even a fixed penalty notice for a first offence instead of resorting to the extreme measure of clamping, especially as its own systems are not error-proof? I’m afraid the new setup reeks of a conspiracy rather than a cock-up.

Reading your article on plug-in hybrid vehicles made me chuckle (“Socket to ’em: plug-ins charge ahead of fuming rivals”, last week). They are of absolutely no use to a high-mileage driver like me. My Mercedes E 250 CDI has done 81,000 miles in the past couple of years and has delivered a trip average of 48mpg, comprising motorway, urban and cross-country driving. On longer journeys with a lighter throttle, 60mpg-plus is easily attainable.

A great article on plug-ins, but the only worthwhile savings to be made are by those with a business tax opportunity, who, thanks to the manufacturers’ fantasy-world figures, are being subsidised by the majority of drivers. Carrying the extra weight of an unused engine equal to three passengers at all times doesn’t sound very eco-friendly to me.

How fantastic: Audi has created the A3 Sportback e-tron, which, according to the manufacturer’s figures (assuming it has followed the government guidelines to the letter), will travel 176.6 miles on one gallon of fuel. Would anyone want to be 176.6 miles away from their wedding or the birth of their first child with no wallet and only one gallon of fuel in the tank? I thought not.

Disposal should be brought into consideration when making the decision of whether to purchase a hybrid vehicle. In my experience, they are regarded with deep suspicion by the motor trade — and, I suspect, the used-car-buying public.

Top of the range

Soon the only car to be classed in category 1 for the government’s new plug-in vehicles grant, and thus qualify for the full £4,500 allowance, will be the BMW i3 range extender (it can do more than 70 miles on a single battery charge and 150-plus miles once the generator has kicked in).

It’s the future: a vehicle built with a lightweight body and a platform developed for an electric powertrain. The technology is amazing and yet it is still tremendous fun and quick to drive. The best car I have owned.

My BMW automatic has a stop-start system (“I hate to brake it to you . . .”, Points, last week). To avoid keeping my foot on the brake when stationary at traffic lights, I apply the handbrake and shift into Park. This doesn’t affect the stop-start system, avoids dazzling fellow motorists behind me and extends the life of the brake lights. It’s win, win, win.

I will tell Ryland James why Ken Adkin probably objects to him keeping his foot on the brake at traffic lights: LED brake lights, like the dreadful LED daytime lights, are so bright they are blinding, particularly at night, and very annoying. I was taught to use the handbrake when not moving — a very sensible thing.

I was surprised the review of the Infiniti Q30 (“Does my bumper look big in this?”, First Drive, last week) did not mention its remarkable similarity to the Volvo V40 — a bit more bulbous, perhaps, but otherwise a dead ringer. Of course, whereas the Q30 has Mercedes A-class underpinnings, the Volvo has a Ford Focus platform, giving it a rather good ride and handling.

I read your child seats article with interest (“Mum, this seat’s so cool I won’t moan about using it”, January 10). One point you did not mention is that it is physically impossible to get two of these large child seats into the back of the sort of smaller car that many women drive. Paying up to £200 for a car seat is one thing; buying and running a bigger car to put them in is quite another.