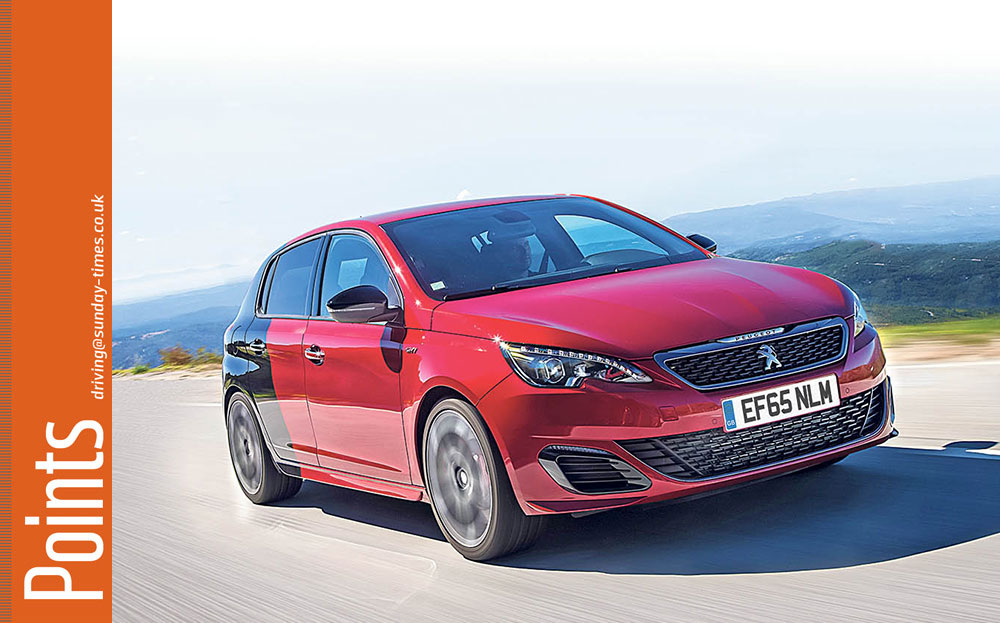 Jeremy Clarkson said of the Peugeot 308 GTi: “Most of the functions are now controlled by the centrally mounted screen . . . a triumph of common sense” (“Et voilà! School Run Mum slips into her thigh boots”, December 6). No, it isn’t. The infotainment centre in my Vauxhall Ampera has 31 switch positions plus two dozen more on the touchscreen. Instead of reaching out a hand to slide a knob to cut off the incoming air, I now have to stop the car and hunt through a series of menus and submenus to do it — impossible while driving. Centrally mounted screens are not a triumph of common sense.

Automatic numberplate recognition (ANPR) technology is pointless while the unregulated market in registration plates continues (“We’ve got your number, and 22bn other ones too”, last week). With plates costing less than £10 a pair online, it’s a free-for-all. They may have your number — but it might not be you.

Wrong arm of the law

It is sinister and undesirable that the authorities operate the ANPR system; it is the first step to the creation of a police state with no political interference. The sooner that this operation is placed under proper democratic control with safeguards, the better.

We’ve got your number, and 22bn other ones too? Maybe in London, but unlikely on the Isle of Skye.

Has anyone ever been inconvenienced, embarrassed or otherwise caused a problem by the gathering and storing of vehicle registration numbers? Does anyone truly think the police are interested in the movements of anyone other than criminals? I for one am happy to be snapped a thousand times a year if it helps to keep us safe.

Admiring the view in Frinton

Your correspondent Peter Plucknett is obviously an outsider to Frinton (“Frinton road show”, Points, last week). There is nothing so common as a high street. He could perhaps be referring to Connaught Avenue, a parade of shops that sweeps majestically down to the Greensward, overlooking immaculate beaches and the sea.

It seems car makers want their customers to evolve into inanimate blobs without usable arms, legs or brains (“Late debate”, Points, last week). I have owned a Volkswagen Golf for almost 22 years, from the golden age when power assistance had yet to appear. The car drives beautifully and is proof that pricy repairs are far less likely without all the unnecessary electronics.

I have just bought a car with stop-start and after one drive decided to switch it off (“Non-starters”, Points, December 6). Keyless entry is also pointless on a family vehicle. What any car must have as a minimum is a lever handbrake, a full-size spare wheel, a CD player in the middle of the dash (not in the glovebox) and a flat floor when the rear seats are folded.

While on holiday in the north of Scotland, I started up my keyless Ford Kuga and got it out for my wife to drive. When she was three or four miles away I discovered the car key in my pocket. She was still driving when I phoned to tell her not to turn the engine off. Success: she turned back. But that could never happen with an ignition key.

About 40 years ago there was a device called a Hot Wash that had a brilliantly elegant solution to the problem of frozen screen wash (“Frozen asset”, Points, last week). It heated the washer reservoir contents with the wasted heat from the radiator, and the hot water removed ice and snow plus diesel smears in the winter and baked-on insects in the summer. All without the need for chemicals and electrical connections, for the princely sum of £2.50 and 10 minutes to install.

I read Alan Knight’s letter about a detached brake disc on his “French car” with interest (“Braking bad”, Points, November 29). I had a similar experience on my wife’s Peugeot 206: the brake pad had become detached from the back plate and wedged in the calliper, preventing the rear wheel from revolving. I thought this a rather serious matter. The Peugeot dealer thought otherwise, however: he shrugged and handed my wife a bill for new pads. I wrote directly to Peugeot; it was unconcerned — “wear and tear” was its attitude.

I have learnt that the law probably prohibits the fitting of any dashcam to my four-year-old Peugeot 508 SW (“You’re snapped: the dashcams turning drivers into cops”, December 6). I’m surprised you did not mention the legal restrictions on a device intruding into the area covered by the wipers. With the large rain sensor on my windscreen, the two blacked-out areas above the rear-view mirror to attach a Dart-tag for the Dartford Crossing and the wipers covering the rest of the windscreen, it’s not possible to fit one legally.

I was intrigued by your report on driving three convertibles up the Zig Zag, as I live at the top of Box Hill (“Go topless in winter and get all the thrills without chills”, last week). However, I was rather surprised that your reporters were able to get such enjoyment, as every time I go up or down, it is inundated with cyclists impersonating Bradley Wiggins on the Olympic cycling road-racing course.