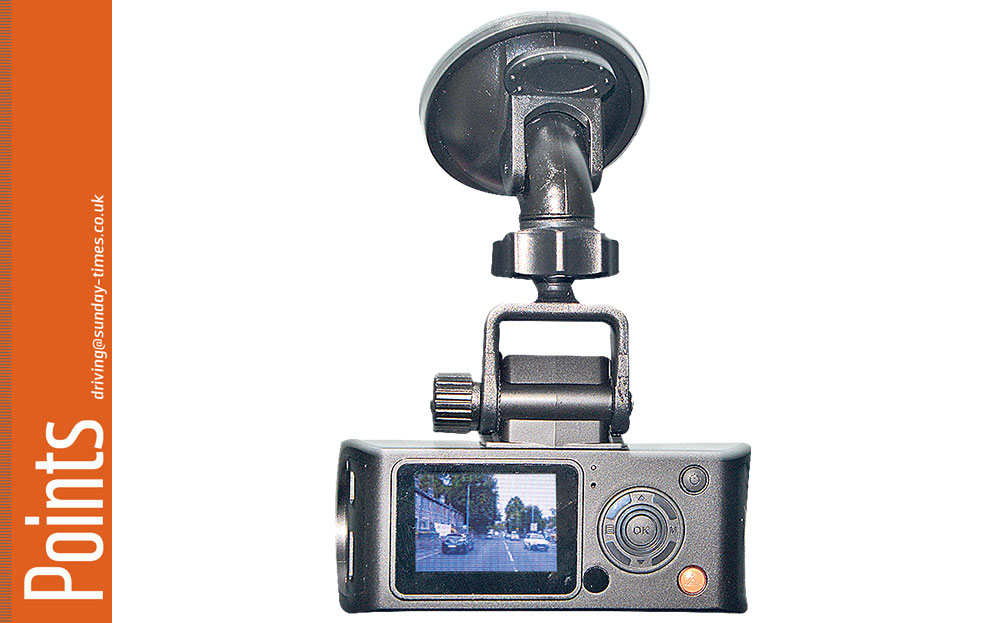 I too fitted a dashcam, partly with the expectation of a significant reduction in insurance premiums (“You’re snapped: the dashcams turning drivers into cops”, last week). So when my policy was up for renewal, I contacted Saga, but was informed no discount would apply as the device was connected via my cigarette lighter, not hard-wired into my electrical system.

There are lots of unsavoury people around these days: can’t dashcam images be Photoshopped either for “just having a laugh” antics, or out of sheer malice?

Shot in the foot

Are all dashcam owners perfect motorists themselves? If they get stopped by the police for driving erratically, the camera could be seized as evidence against them. “That lunatic” may just be them one day, and their shiny device might convict them. We are being filmed all the time by councils, the police and now by pious vigilantes. What a lovely bunch of people we are, turning each other in for fame on YouTube.

In the main newspaper was a prominent article emphasising the very real dangers of a terrorist-operated drone bringing down a civilian plane. Meanwhile, Driving’s seasonal gift guide (“Perfect Christmas gifts for car enthusiasts”) included a rather sophisticated drone that anyone can buy for £2,519. Would it not be sensible to install the same security checks on buyers of drones as is required for firearms?

Sitting with a coffee while watching the ponderous efforts of motorists “near-missing” their way down the high street is one of our favourite diversions when we visit Frinton-on-Sea (“California dreaming”, Points, last week). The streets fairly ring with the tinkle of broken lights and the scuffing of alloys. It beats anything else for entertainment; please don’t take it away from us!

You say Fiat will use the Mazda MX-5’s interior for its 124 Spider (“The Clarkson review: 2015 Fiat 500”, November 22). The Mazda has no glove box, the seats are plain and you hit the sat nav control knob with your wrist as you drive. Address these design deficiencies and Fiat will have a runaway hit.

Your scooter-riding reader Bruce Burrows perfectly demonstrates the flawed attitude of many road users to overtaking (“Kept in the dark”, Points, last week). It is not acceptable to overtake when a vehicle is coming towards you — even if it is “another motorcycle”. In my many years of training motorcyclists, there is one truism I always passed on to my pupils: “Treat all other road users as idiots who will potentially kill you.” I rest my case.

As a passenger I have been making a tally of the number of vehicles with faulty headlamps that result in them having just one light on. On a recent trip from Shepton Mallet, Somerset, to Derby I counted 209 of them. The average during four months of keeping a record is 106 over about 50 miles.

May I ask your reader Geoff Wolfenden how old he and his friends are (“Non-starters”, Points, last week)? I assume that along with disabling the stop-start facility they all also turn off the antilock braking, sat nav, power steering and parking sensors. My 93-year-old great-aunt has just taken delivery of a new car with an electronic handbrake and I quote: “Why would anyone not want one of these? It’s so much better. Only old people wouldn’t want one.” I can only conclude Mr Wolfenden is in advance of 93.

I agreed with the correspondent’s letter right up to the bit where he said that keyless ignition was universally hated. It is probably the thing I like most about my car and I really can’t see myself buying another vehicle without it.

The Lockheed F-104 Starfighter was referred to as “notorious for its tendency to crash” (“Crash course”, Points, last week). A Canadian pilot with extensive experience of flying this type of aircraft said the F-104 was designed as an interceptor and was fine in that role. He said the trouble began when it was used in a different role — as a low-level bomber — for which it had not been designed. Assuming this pilot knew what he was talking about, the F-104’s notorious reputation appears to have been misplaced.

In America, Alan Knight’s complaint about defective brake parts (“Braking bad”, Points, November 29) would have triggered an investigation by the National Highway Transport Safety Administration (NHTSA) rather than simply being referred to the manufacturer.

Individual US motorists are actively encouraged to report defects to a dedicated NHTSA website. For example, a driver involved in a side-impact collision reported that a curtain airbag had deployed but left him with a gash that needed 20 stitches. NHTSA investigators scoured salvage yard websites and found the same support bracket had detached in at least two other cars. The result: 186,000 vehicles recalled because of one individual complaint.

So John Seymour has screen wash that hasn’t frozen in 52 years (“Clear solution”, Points, last week). He must have bought it half a century ago, then, because most modern screen wash freezes the minute the temperature drops to freezing, in my experience. And don’t get me started on windscreen de-icer — a misnomer if ever there was one. Presumably the need to save the planet now means that manufacturers can’t put anything in these products that actually works any more.