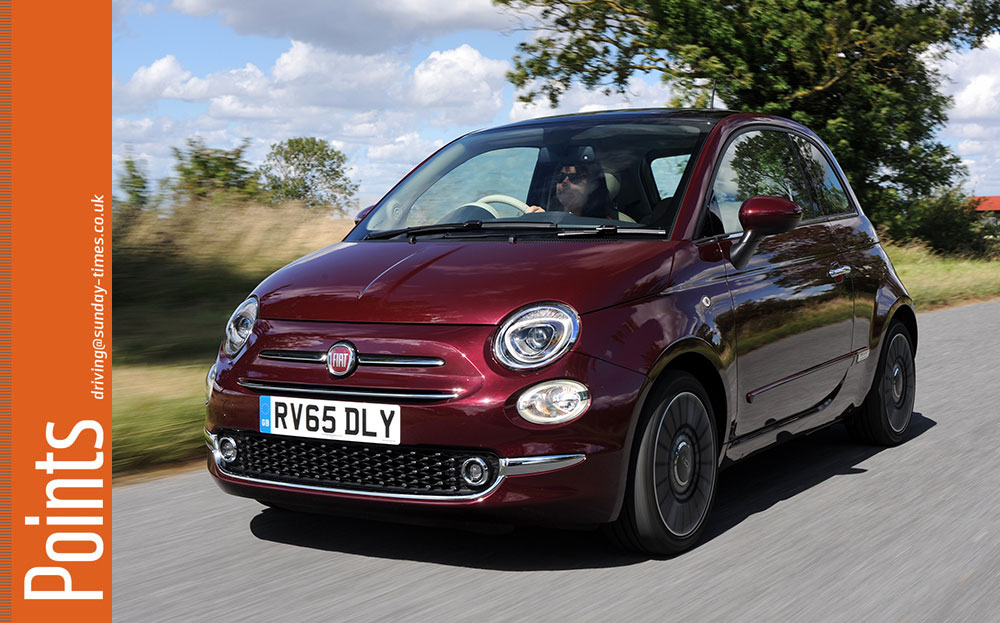 When I heard that a Google car had been stopped for travelling at 24mph in a 35mph zone I wished we had Californian-style law enforcement in Frinton. Many local residents manage only 25mph-30mph on national-speed-limit roads, and even then have to brake for the slightest of bends and oncoming traffic. A roadside check, potentially followed by a “fit to drive” assessment, would remove a number of unsafe drivers from our highways.

When I finally prised Driving from the male members of the household I was delighted to see that it gave the Fiat 500 four stars (“When the traffic stops, the love-life turbocharger starts to whir” Clarkson, November 22). I am the proud owner of a Fiat 500 Tributo Ferrari special edition and, yes, the car makes me smile every time I drive it too.

Manufacturers’ mileage and emission figures are like political manifestos: interesting for comparison but irrelevant to the real world (“Compare and contrast”, Points, last week).

Do we really need a heating system for windscreen washers (“Hot topic”, Points, last week)? Screen-wash fluid, which also acts as an antifreeze, has kept my windscreen clear for 52 years.

I understand that earlier this year police prosecuted the first motorist found hogging the middle lane of a motorway. I must congratulate them for being able to locate the car in the sea of HGVs doing the same thing.

A short, unofficial survey among friends and neighbours reveals that eight out of 10 of them have disabled or disconnected the stop-start facility on their cars. The remaining two are convinced the feature has a detrimental effect on fuel consumption. The other almost universal dislikes are electronic handbrakes and keyless ignitions.

Driving my 2014 Mercedes ML 250 BlueTec Sport, I am constantly annoyed by various warning pings from the parking sensors generated by blades of grass on verges, and by the stop-start of the engine in traffic. I do sometimes wonder whether I actually need to be there as it takes most motoring decisions out of my hands.

PP of Leek wanted to know which vehicle holds the numberplate H8 STP (Car Clinic, November 15). If they had logged on to the Halfords website and pretended they wanted wiper blades, say, they would have had the option of entering the registration number. It would have told them that it was on a Toyota MR2, though it would not have revealed if the vehicle was taxed or had an MoT; they would still have had to go to the Driver and Vehicle Licensing Agency website for that.

The letter about the Lockheed F-104 Starfighter took me back to my Nato service, when the plane was notorious for its tendency to crash (“Written in the stars”, Points, November 22). “How do you get your very own Starfighter?” the West Germans would joke. “Buy an acre in Bavaria and wait.”

I contacted Cardiff’s Seat main dealer to see if our 2010 Ibiza diesel was subject to the emissions recall. It said yes, in January, but there was an outstanding recall involving the replacement of the fuel filter. I booked the car in and was told the part could not be replaced without breaking the fuel lines to the filter. Charge: £150 plus VAT. If a relatively simple procedure means being charged for damage caused by obligatory work, it doesn’t bode well for the more radical recall that’s pending.

My wife has just kerbed an alloy wheel on her new Mini Cooper. The previous Cooper was kerbed three times. Can designers make it “cool” to fit small-diameter alloys with fat tyres to help my wallet?

I took my motorcycle driving test in 1953 on a wet day (“Turning a page”, Points, last week). The examiner positioned himself near a crossroads and when the emergency stop came he stepped off the pavement and held out his arm. In the rain the brakes on my pedal cycle with a 49cc Cairns Mocyc engine on the handlebars were ineffective: I went straight past him. He still gave me a pass that allowed me to ride any motorbike, even a 1000cc Vincent.

The letter reminded me of a friend who took his motorcycle test in the 1960s on a scooter. Rounding the corner, he saw two men on their backsides and a scooter in the road. The examiner had stepped in front of the wrong scooter.

In the test of three super-fast estates you mention the sweeping LED indicators at the rear of the Audi RS 6 (“Less is more in the load-lugger Olympics”, last week). I was driving behind an Audi equipped with these and although it was only for about 200 yards it was still horribly irritating. God help us if all German cars start using them.

Kept in the dark

I wish drivers would check their headlights to make sure they are both working. I nearly had a head-on collision with a lorry that had only the nearside one working. I was on a dark road driving a scooter. Coming up behind a slower vehicle, I moved out to pass it as I saw one headlight coming towards me, thinking it was another motorcycle. It wasn’t until the last minute I realised it was a lorry.