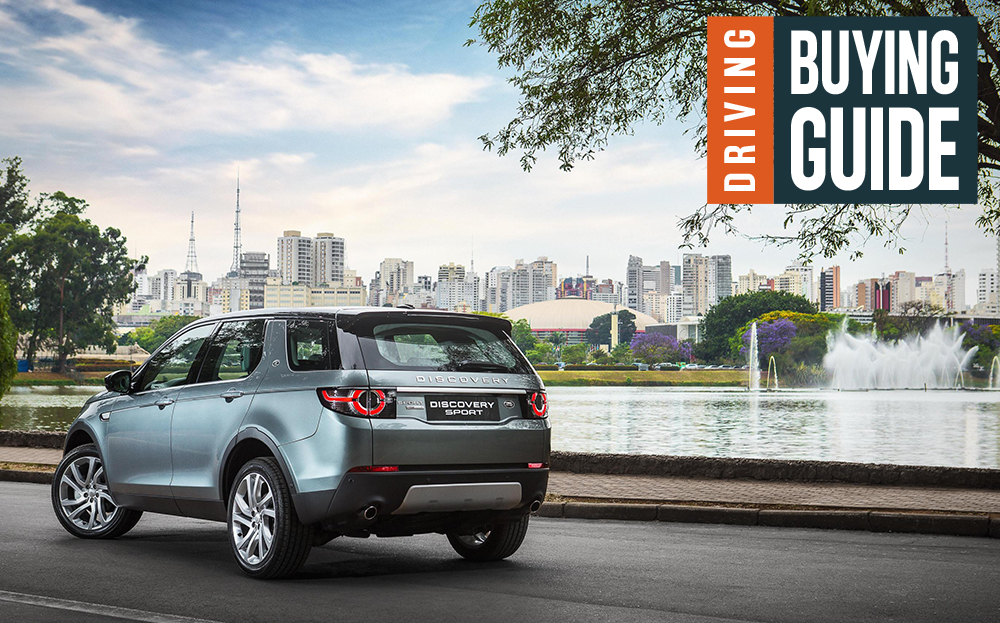 SO, YOU’VE read all about the new Land Rover Discovery Sport (pictured above), and browsed the Land Rover car configurator online. It sounds good, doesn’t it? But you can’t quite decide between that and the temptation of a used SUV which also comes with seven seats but more bells and whistles for much the same money.

Here we round up some of the best used SUVs that offer go-anywhere ability – well, enough to tackle the rutted track to your favourite forest campsite – and practical, child-friendly interiors with seven seats.

All are cars we have found through manufacturer’s approved used car programmes, which means they should come checked over and with the best level of warranty protection.

There are challengers from Land Rover’s own showroom, such as the Discovery 4, and popular models from Audi, BMW, Nissan and Volvo. Set aside a Sunday and book those test drives (for after you’ve read your quality weekly, of course). 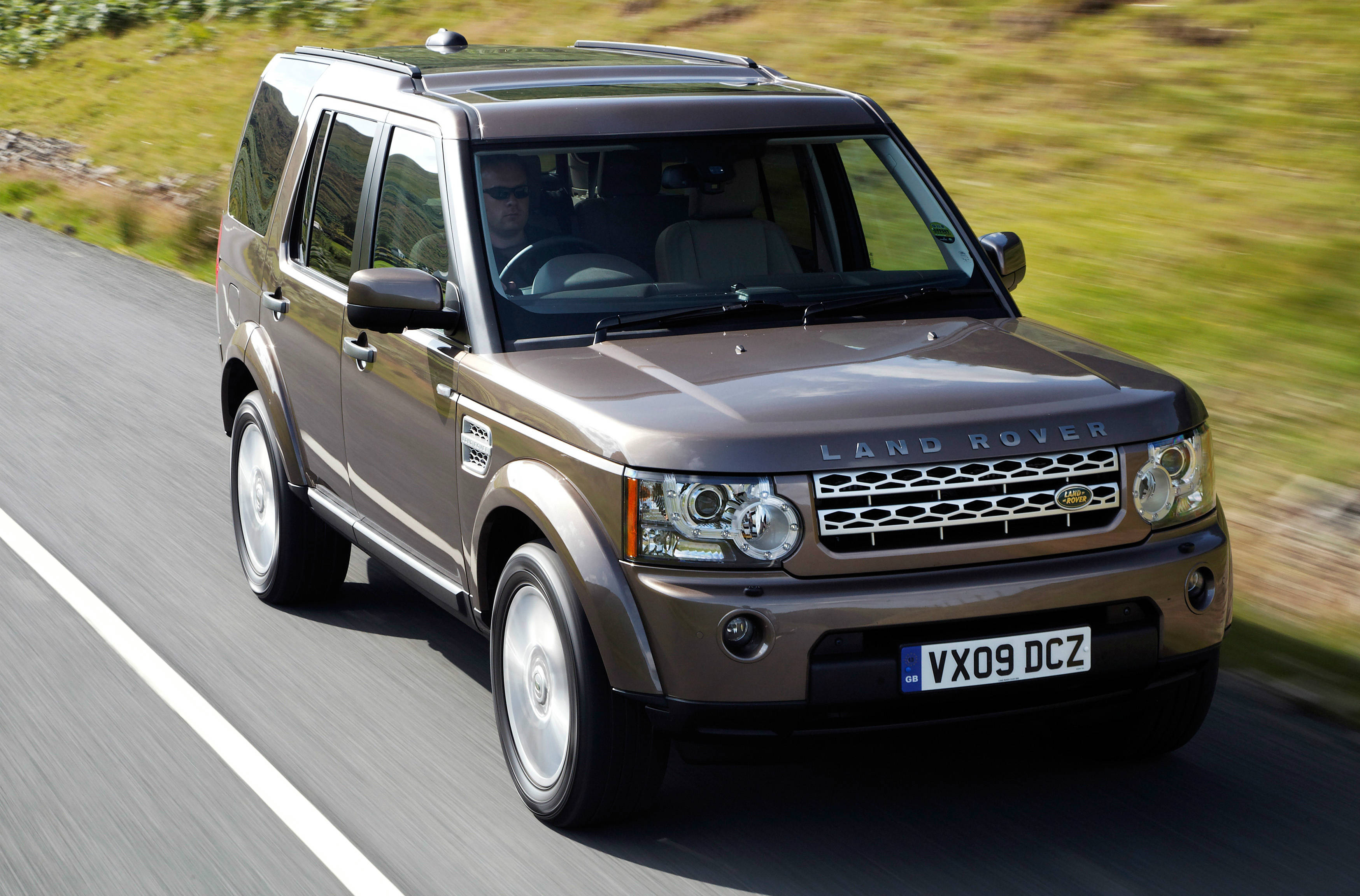 If you buy a Land Rover Discovery 4 without doing your homework you’ll be in for a nasty shock. This is a big, heavy car (nearly three tons) and you definitely need the 3.0-litre V6 turbo diesel engine (introduced for the Discovery 4) to power the Discovery up hill and down dale. At best, the fuel economy will be 32mpg – but more likely 25mpg – and annual road tax will set you back nearly £500.

It’s also complicated – a necessary evil to make it so capable when conquering the yacht club slipway or local stretch of green lane off-road route. Which is why we would recommend buying one from a Land Rover dealer; the peace of mind of an approved-used warranty is worth its weight in gold.

This is a genuine seven seater, and with the third row of seats in folded into the floor there’s a 543-litre boot built for buggies, dogs and wellington boots.

We found a good number of late 2011 models with around 30,000 miles on the clock for £35,000. The interior is big on space and practicality, and families swear by its ability to carry everything including the butler sink. This is a genuine seven seater, and with the third row of seats folded into the floor there’s a 543-litre boot built for buggies, dogs and wellington boots.

It’s hardly light on its feet on the road, but the air suspension system keeps it relatively level and helps stop it feeling like a boat taking on water, while the “stadium seats” are arranged in such a way as to give everyone a good view of the road ahead.

Browse the Land Rover Discoverys for sale on driving.co.uk 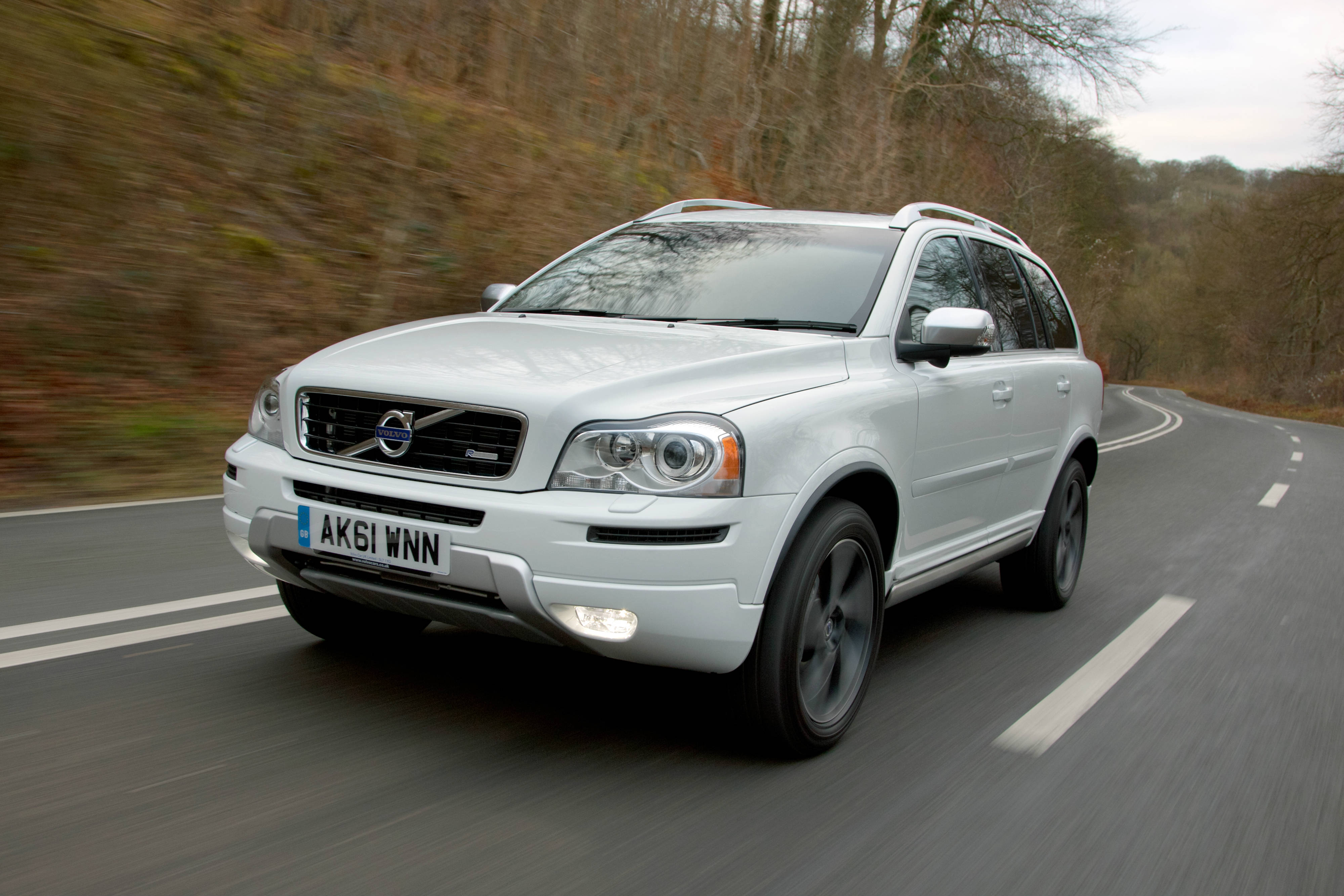 Your money goes a lot further when comparing the Volvo XC90 with the Land Rover Discovery, with a 2014 car for the same price as a 2011 Discovery. It may not be designed to wade through rivers and climb mountains, but it will do what most Mums and Dads want from a big family car like this: carry seven people in comfort yet leave just enough room for a lightweight pushchair and couple of bags in the boot.

It may not be designed to wade through rivers and climb mountains but it will do what most Mums and Dads want from a big family car like this: carry seven people in comfort

Inside, there are neat touches, such as seven individual seats and lots of stowage space for coffee for the grownups and teddies and tablets for the kids. And for long distance trips, such as the family camping trip to Cornwall, the front seats prove particularly supportive. Fold the rearmost seats down and there is a total of 615-litres space for the camping gear.

The D5 five-cylinder turbo diesel engine is not particularly refined, but it sounds characterful, and its fuel economy of 34mpg is a lot more palatable than that of the Discovery. It is mated to a six-speed automatic transmission, and emits 215g/km of CO2, which means the road tax is £285 a year.

As for the four-wheel drive system, it gives the big XC90 a good hold of regular roads and will see it get out of a wet field or across beach, but don’t expect this SUV to conquer much more. 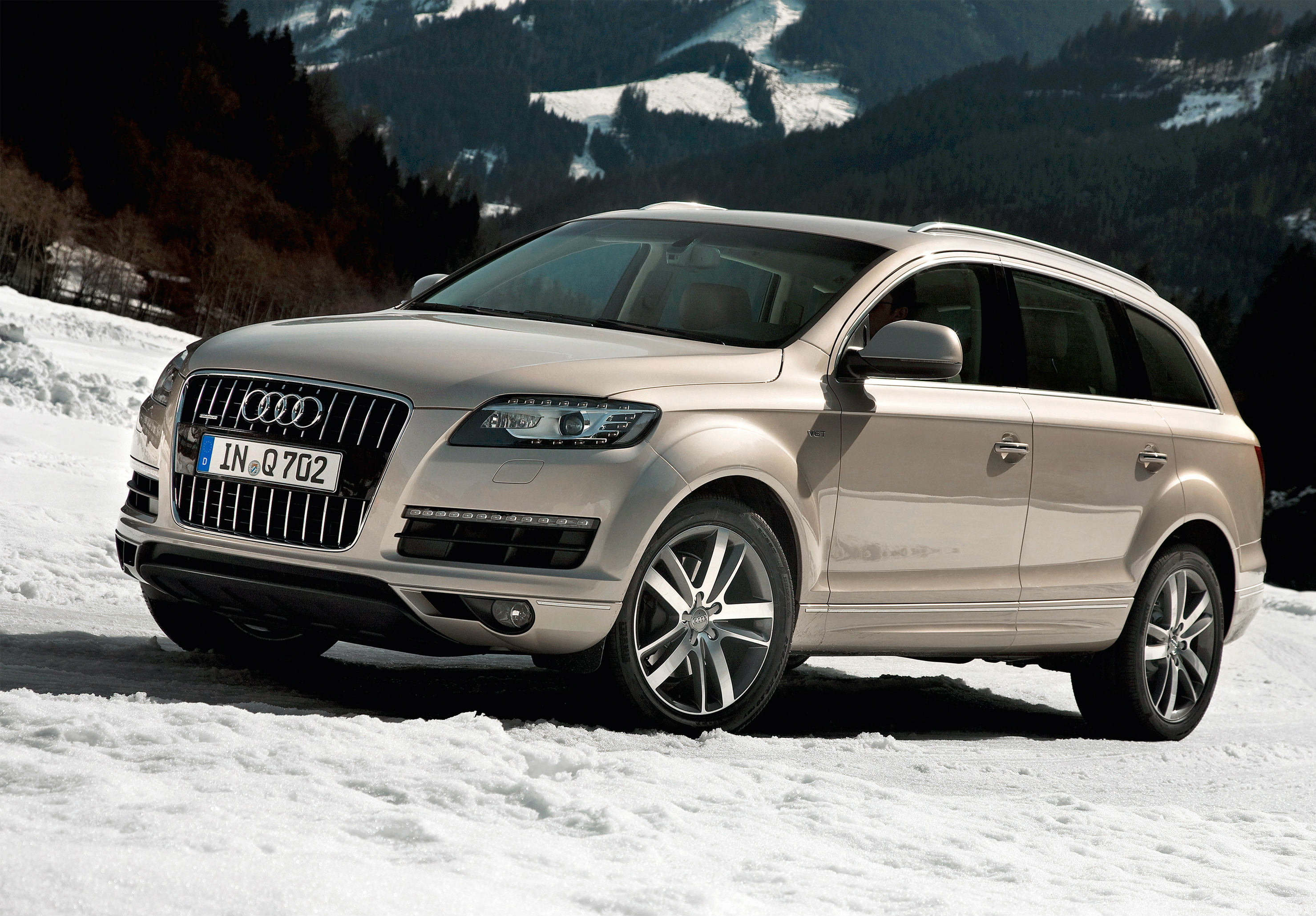 Stroll in to your nearest Audi dealer and they will be able to fit you out like a premiership footballer. The Audi Q7 is a popular choice amongst players, as it’s big and commanding and has an interior that feels more luxurious than some SUVs.

For the price of the new Land Rover Discovery Sport, you get a larger car – so big it’s best to check it will fit in the garage – and a powerful 3-litre V6 turbo diesel engine that’s but a distant murmur even at full throttle and can return as much as 38mpg.

Like the Discovery 4, it uses an air suspension system, which gives the Q7 a wonderfully calm and composed feeling over all roads. It also means drivers can raise the ground clearance when tackling a rutted track to a romantic French farmhouse for the summer holidays.

It uses an air suspension system, which gives the Q7 a wonderfully calm and composed feeling over all roads

The interior is as vast as the exterior suggests. With all seven seats in use, the boot still has 330-litres of luggage space remaining. Fold the two rearmost seats down and there’s a whopping 775-litres. If that’s not enough space for you, buy a bus.

Browse the Audi Q7s for sale on driving.co.uk 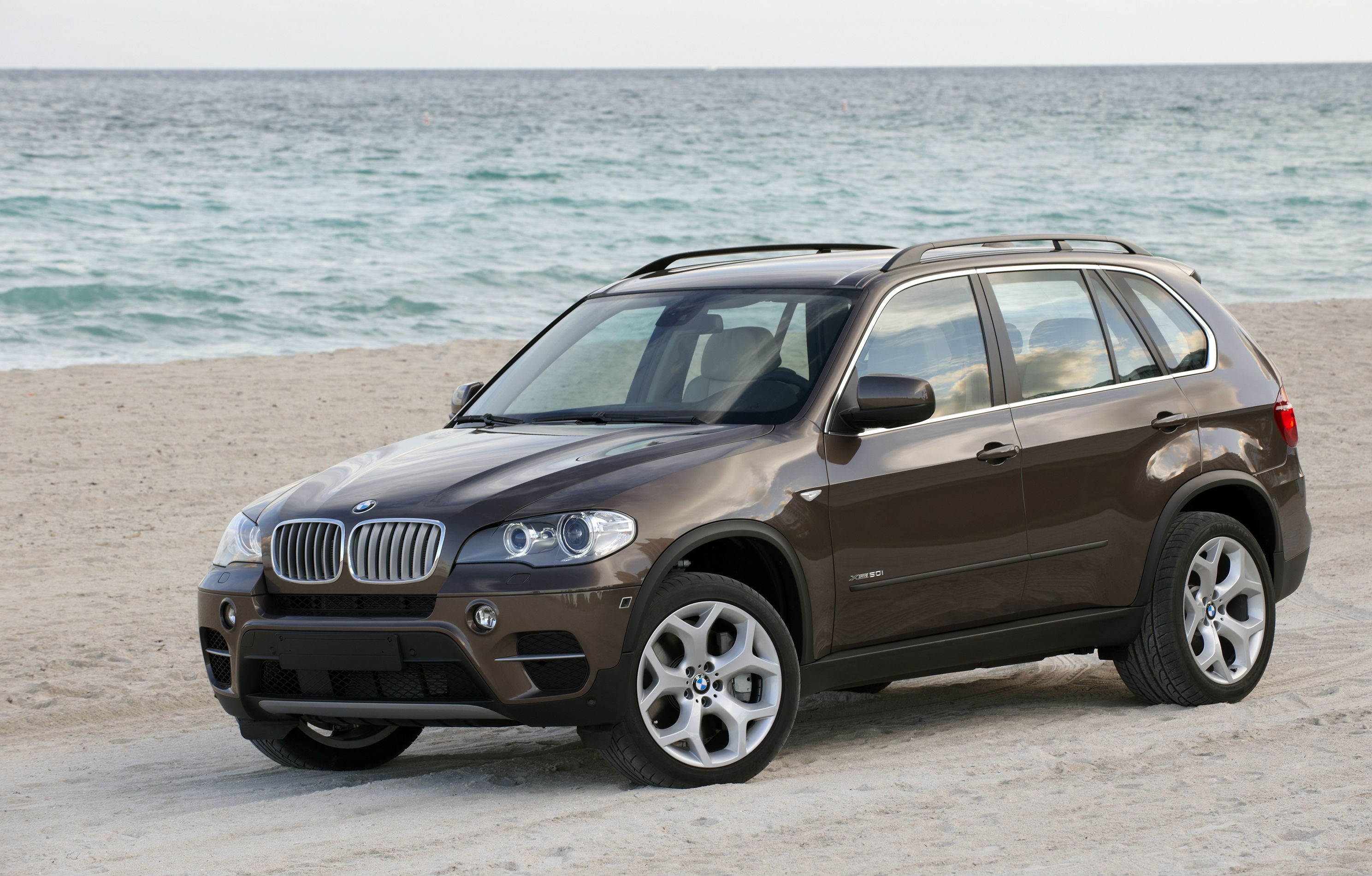 Let’s imagine for a moment that you have test driven the Land Rover, Volvo and Audi, then come to the BMW X5. It will blow you away. This may not be the largest or most comfortable SUV for a family, but from the driver’s seat it feels fantastic.

The car’s performance and roadholding leave rivals standing. It is fast, responsive and agile, and is happier tackling a winding road than it is squelching along a muddy track. The 3-litre turbo diesel engine is smooth and has lots of pulling power low in the rev range, and if you are happy with a higher mileage car then for the same budget there is the choice of the 40d version, which is more powerful still.Needless to say, it’s a case of horses for courses, but if you don’t want an SUV that makes its driver feel like they’re at the wheel of a bus, this is the one for you.

Where an X5 struggles against the competition is cabin space. It’s smaller, the rearmost seats (nearly half of X5s are ordered with seven seats) really are only suitable for children and the boot has just 200-litres of luggage space when all seats are occupied. For some buyers, the high standard of fit and finish of the cabin goes some way to making up for this.

Browse the BMW X5s for sale on driving.co.uk 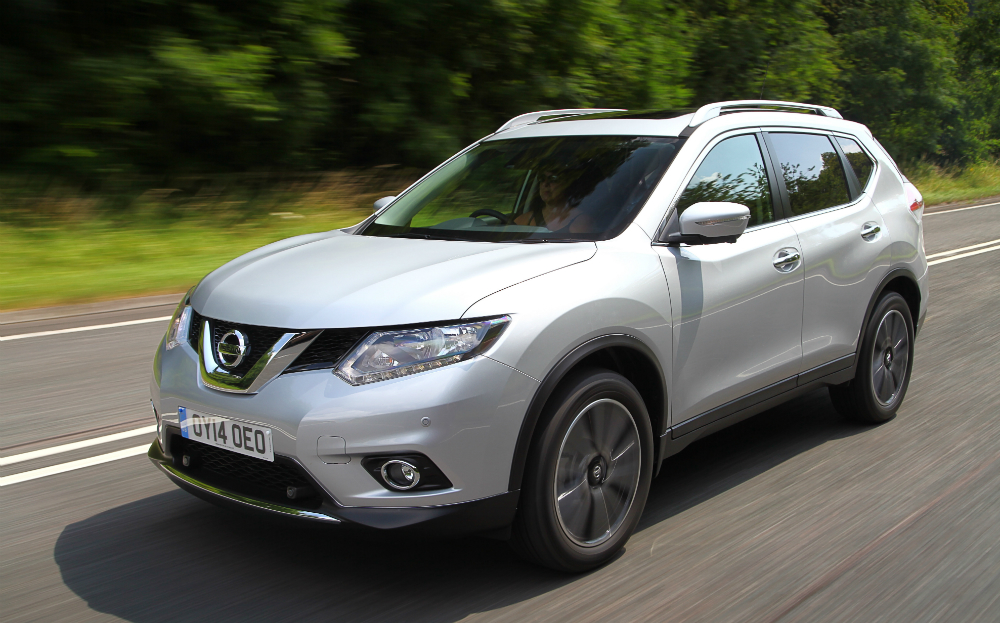 Ooh, controversial – it’s not a used car. But it’s a point we felt worth making; you can buy a brand new, top of the range, seven seat Nissan X-Trail for less than the price of the most basic Land Rover Discovery Sport.

At this point, we should point out that the Nissan’s 1.6-litre dCi engine has its work cut out hauling the seven seat model about the place. It is considerably less powerful than, say, the Discovery Sport’s 2.2-litre unit, and drags its heels at times, accelerating from 0-62mph in 11 seconds (compared with 8.4seconds for the Discovery Sport). But it’s quiet and refined, and the fuel consumption is claimed to be 53mpg, which in this company is something to shout about.

The fuel consumption is claimed to be 53mpg, which in this company is something to shout about

The new X-Trail’s interior is surprisingly upmarket and spacious. Legroom for middle seat passenger is vast, and while the third row of seats are best suited to kids, they are easy to access thanks to tilt and slide middle seats. The problem is that the boot is restricted to just 135-litres with all seats in use, which is the smallest of the bunch in this company.