THE COMPENSATION culture has a lot to answer for but when you’ve just been told that the pothole you drove through has damaged your car to the tune of several hundred pounds, any scruples you might have are sure to disappear like the air from your punctured tyre.

It’s not always known what proportion of claims for compensation are successful, only that claims cost the government around £8m a year and potholes are a growing concern for motorists.

Be aware that claiming compensation for pothole damage to your car is a time-consuming process — it might take anywhere from two to five months— and there’s no guarantee you’ll be successful.

But take heart from Nick Freeman, a lawyer known as “Mr Loophole” for his forensic knowledge of the law. He recommends drivers with an honest claim should take the responsible authority to task and that, providing they have sufficient evidence, they ought to succeed.

Assuming you want to go ahead, how can you go about making a claim? Here’s our guide to claiming compensation for pothole damage.

How to claim for pothole damage

Assuming it’s safe to, take a photograph of the pothole as soon as possible. Measure it and make a sketch of the area noting if the hole is on a bend or hidden from view.

2. Find out who is responsible for the road

The road may be privately owned, in which case your claim is on the owner or owners, which can make things more complicated.

3. Check if the authority has been looking after the road properly

Assuming the road is publicly owned and managed, you need to submit a Freedom of Information (FOI) request to find out if the authority has been maintaining the road as it should (the council or agency will tell you its FOI email address). Don’t mention it’s in connection with a claim; you just want to know the dates of inspections in the past two years, and any defects recorded.

And download a copy of “Well-managed highway infrastructure”, the code of practice for road maintenance management. You don’t need to read all of it; just get a feel for the standards authorities should be striving to achieve and the defence they’re likely to mount. In any case, it helps to show some knowledge of it.

Having received the authority’s reply to your FOI request and compared it with guidelines in the code, above, if you think you have a case, now is the time to submit your claim. Write a clear and detailed letter to the authority setting out your case, supplying evidence of the state of the road, and the damage to your car and the cost to repair it.

Don’t worry if, naturally enough, you’ve already had your car repaired. The photograph you took, timed and dated, of the pothole and your car, will be sufficient.

5. Stand by to dispute the council’s response

One hurdle you’re likely to encounter at this stage is Section 58 of the Highways Act 1980. This statutory defence allows a council or highways agency to defend claims on the grounds that it has taken reasonable measures to ensure that problems such as potholes are found and dealt with swiftly.

It should have a system in place ensuring this and if it has followed it, your claim might fail, at least in its eyes.

Your job is to prove it hasn’t followed the system, which you may be able to do by making a Freedom of Information (FOI) request and asking it to provide evidence of inspections and maintenance.

Note that potholes less than 40mm deep are not generally considered as being dangerous to vehicles, although they could easily throw a cyclist off their bicycle.

If the authority is hiding behind Section 58, try to see things from its point of view.  Armed with your evidence gathered at the scene, your FOI information and the highways maintenance code of practice, judge if its Section 58 defence is reasonable.

Don’t get too bogged down in the detail. Always keep in mind the authority’s simple duty to maintain the road in a reasonable condition. A pothole deep enough to damage your car is hardly reasonable.

“Quoting Section 58 is a bully-boy’s tactic,” says Nick Freeman. “Don’t be intimidated and instead, tell the authority you will take it to the small claims court. In my experience, officials quickly back down.

“In any case, it’s the authority’s duty to keep the road surface in a reasonable condition. Applying common sense, a judge will easily decide whether it has fulfilled this simple requirement and adjudicate accordingly.”

6. Take the claim to court

If the authority still believes it has no case to answer, but you are equally certain it has, then the small claims court is your next stop. You won’t need any legal representation. Simply come armed with your evidence and let common sense prevail.

According to Freeman, you might find that, impressed by the strength of your conviction, the authority backs down before it gets to this point.

Potholes are caused by traffic passing over the layer of asphalt and creating cracks in the road surface. Over time it begins to break up. When it rains, water makes its way into the cracks, and if the temperature drops below zero C the water freezes, expands, and fractures the gaps. Traffic then breaks up the road further, removing the asphalt in that area and creating a hole.

How long it takes potholes to form depends on the climate of the local area, and how much and what type of traffic uses the road. The number of potholes at any one time will depend on how often councils repair them.

How are potholes repaired? 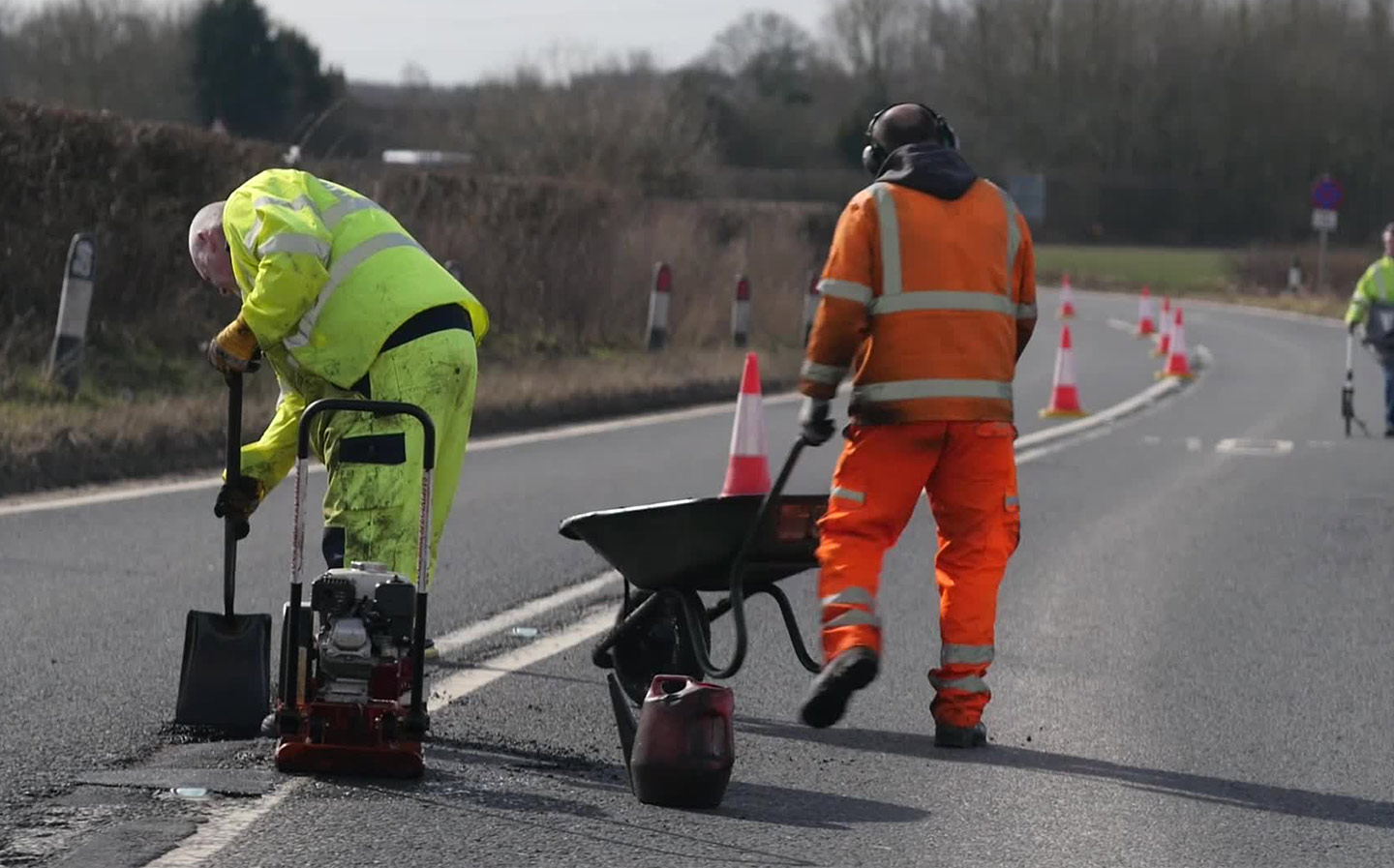 Councils can apply temporary patches during winter but proper repairs can only take place in warmer weather.

One common method of repair is to use an air jet to clean the hole of dirt, moisture and loose fragments, then the area is sprayed with a sealant before a mix of bitumen and aggregate is blasted into the hole at high pressure. Any loose materials is brushed onto the repair and then a compactor can be used to finish the surface.

You can watch a video of a typical pothole repair here.

How to report potholes to the council

Prevention is always better than cure, they say. That’s why reporting potholes to your local council will help them get repaired before any serious harm is done to people and vehicles.

You can report a pothole through the government website gov.uk/report-pothole