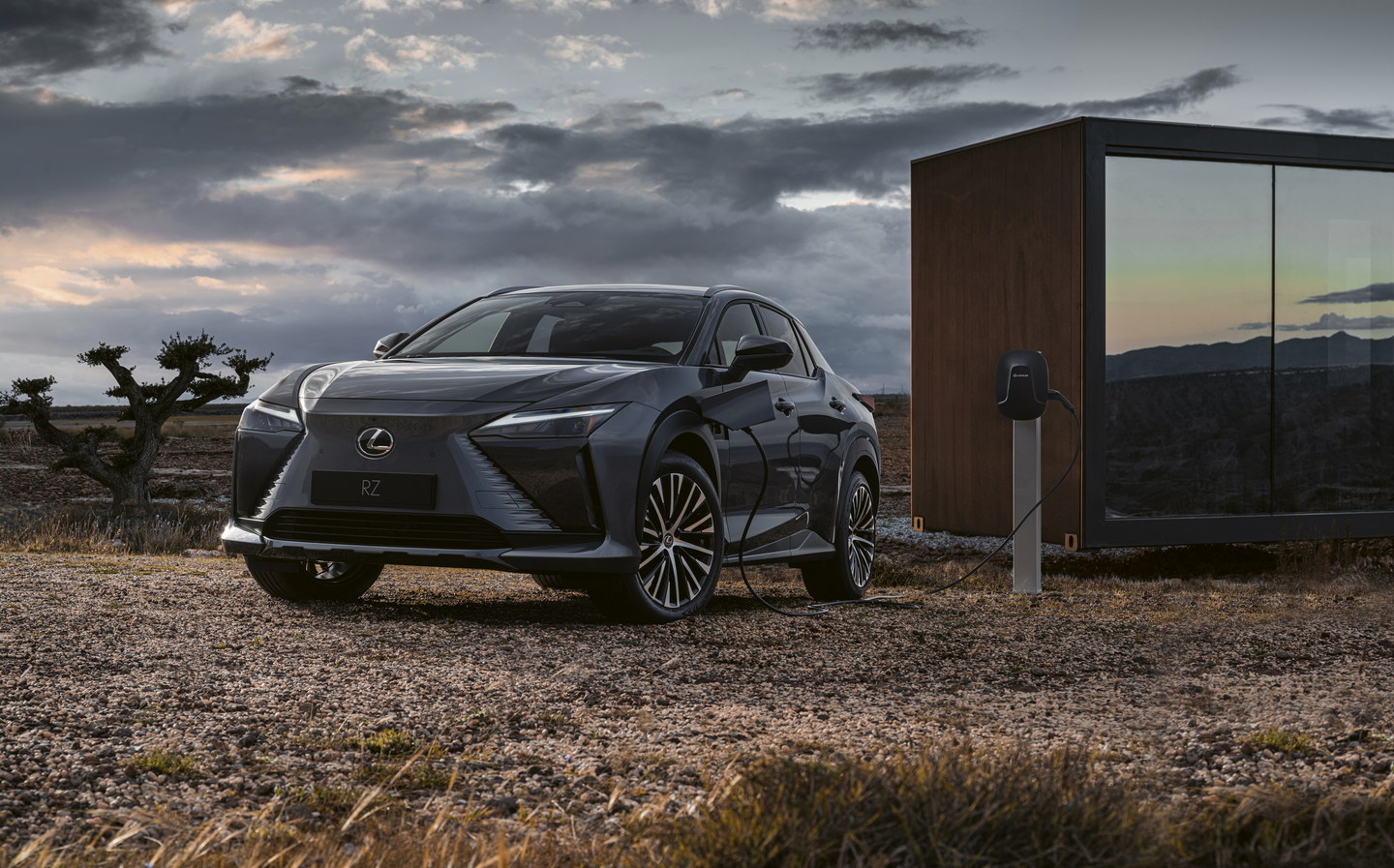 Lexus has fully unveiled the RZ, its first pure-electric vehicle developed from the ground up, offering a range of around 250 miles between charges and a design feature first introduced in cars from Tesla that is likely to prove equally divisive: a steering yoke.

Due to arrive in the UK towards the end of this year in RZ 450e form, the Lexus shares its platform with the Toyota bZ4X and Subaru Solterra electric SUVs but is pitched as a more luxurious prospect than both, with a distinctive look that starts with the unusual grille treatment.

The new design takes the signature Lexus grille shape and, given that it’s an electric vehicle with no grille required, finishes the area in the car’s body colour, blacking out the spaces to each side.

An option to paint the bonnet in the same contrasting black as the RZ’s roof means an interesting duo-tone finish can be achieved, which visually expands the blacked-out grille area up to the windscreen and beyond. The shape of the wings and bonnet produce a similar spindle effect to the fronts of other Lexus models, such as the LC coupé and ES saloon.

At the rear, a full-width light bar sits below a tailgate-wide spoiler lip, while up at roof level, further aero aids such s vestigial fins extend beyond the sloping roofline.

The whole package sits on a set of 18in alloy wheels which buyers can option up to 20 inches in diameter.

Inside, the headline feature is the squared-off steering yoke. Also seen on the Toyota bZ4X, it’s a design borrowed from American electric car maker Tesla, which introduced the aircraft-style steering control (which is also used in motor sport) on the most recent Model S saloon.

Critics worried that drivers would find it difficult to control the car when “feeding the wheel” or “crossed up” — i.e. making tight turns — though concerns over the yoke’s legality in the UK were put to bed by the Department for Transport, which told Driving.co.uk that the regulations do not stipulate any particular shape or size of steering control.

Lexus said the key advantages of the yoke, which will arrive as an option in mid-2023, are clearer, unobstructed views of the instrument binnacle, and its 150° of turn from straight ahead to full lock eliminates the need for hand-over-hand turns.

This set-up reduces “unnecessary feedback” between wheels and driver, Lexus says, meaning more stability over rough surfaces or in crosswinds. A fail-safe with an emergency power supply is on hand should the steering-by-wire system lose its primary power source.

The instrumentation in general is angled towards the driver and fairly straightforward with a digital binnacle mounted low in the driver’s eyeline, an ergonomically-angled 14in multimedia touchscreen and the heating and climate controls still easily accessible, with some hard buttons retained.

Up top, an electrically-dimming (and optional) panoramic glass roof gets a coating that reflects solar radiation, reducing the need to use either air-conditioning or heating to counter the effect of the glass roof and deplete the battery in doing so. It also means that the vehicle can save weight by eschewing a retractable sunshade.

Heater vents are positioned at the driver’s and passenger’s knee level. Rather than using the air conditioning to heat the whole cabin, they can be used as part of a more efficient combination of heated seats and heated steering wheel to generate “the feeling of a warm blanket around the legs.”

Lexus hasn’t released much detail regarding the RZ 450e’s driver and safety assistance features. However, new features include Proactive Driving Assist, which uses a front camera to determine the angle of a bend and adjust the steering accordingly when making the turn.

The e-Latch system is an electronic door-opening mechanism linked to the RZ’s Blind Spot Monitor to provide Safe Exit Assist and stops the door from opening if it detects an approaching vehicle or cyclist. Lexus aims to prevent 95% of the accidents caused by door opening.

As with most purpose-built electric cars, the RZ 450e’s e-TNGA underpinnings integrate the 71.4kWh battery pack into the chassis, leading to a lower overall centre of gravity, with better stability and driving dynamics as a result. Lexus estimates that the RZ 450e should be good for around 250 miles between charges.

A pair of motors power all four wheels, with 201bhp going to the front and the rear receiving a further 107bhp resulting in a maximum total power output of 308bhp.

Power distribution is constantly monitored by Lexus’s new Direct4 all-wheel-drive system, which reacts to a range of factors to deliver the power when and where required.

Pricing for the Lexus RZ 450e is due in May, with deliveries commencing towards the end of the year, though the usual caveats apply to delivery times in light of the ongoing global semiconductor chip shortage.