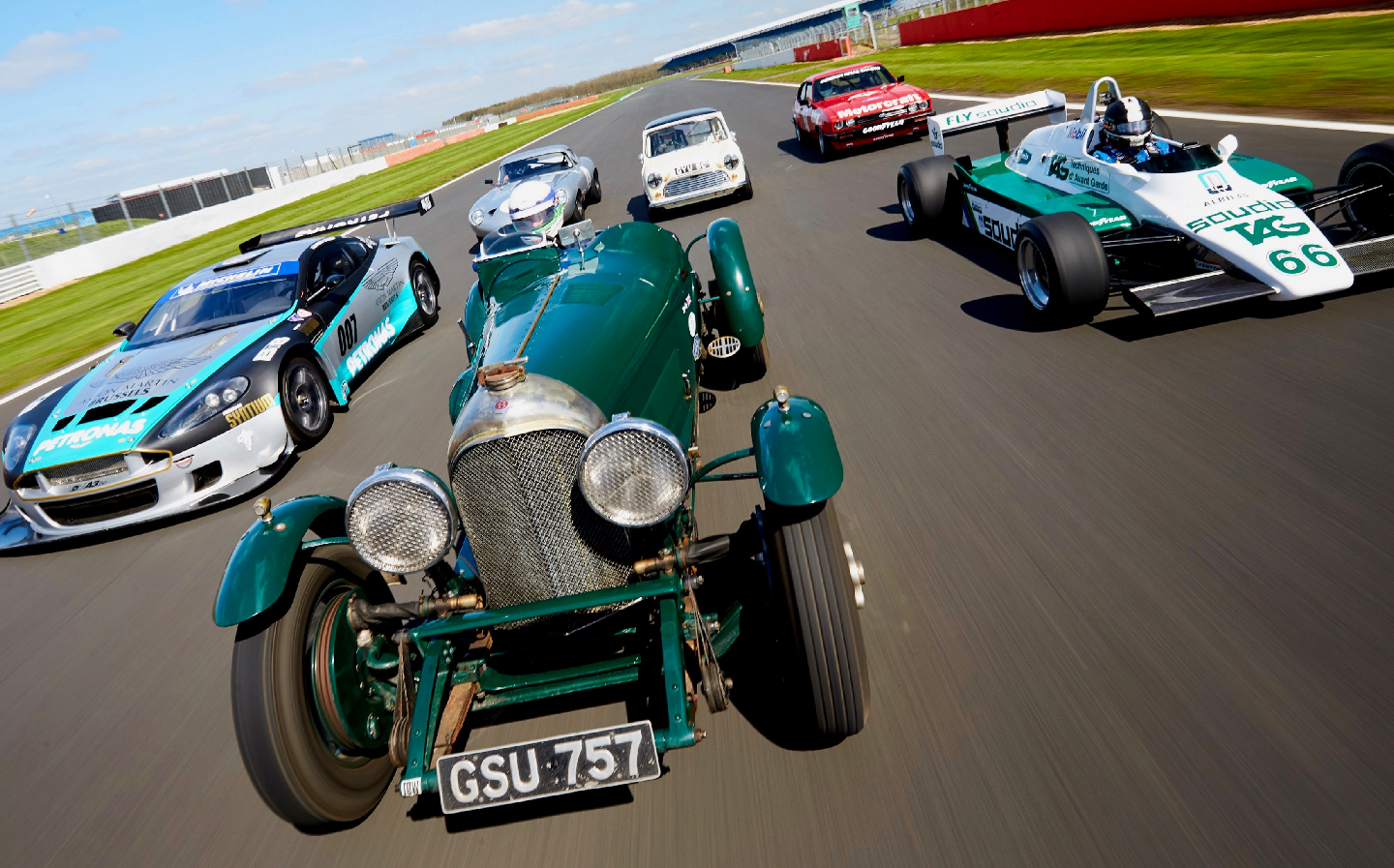 What is the Silverstone Classic?

The Silverstone Classic is an annual motor racing festival held at Silverstone Circuit, home of the British Grand Prix, in Northamptonshire. It takes place over the August bank holiday weekend, which this year means August 26-28.

As with the Goodwood Revival, there’s proper wheel-to-wheel racing on track between classic cars as well as a big effort to create a festival atmosphere with food tents aplenty, camping and always some great musical acts playing. Unlike the Revival, though, there’s no pressure to dress up in period costume.

The on-track action itself is the highlight, with everything from 1920s pre-war sports cars to the historic touring car action and demonstrations of ‘90s F1 icons.

What’s on at the 2022 Silverstone Classic?

The Silverstone Classic will feature a host of Grand Prix cars from the early days right up the the present, in both static displays and on track.

Perhaps the most fun will be Ignition GP, which will involve up to 20 F1 cars with high-revving V8, V10 and V12 engines dating from 1989 to 1997 taking part in daily displays around the circuit, in order to bring back the noise and drama of those incredible pre-hybrid era machines.

Races featuring GP cars will include the Historic Grand Prix Cars Association’s front- and rear-engined pre-1966 entrants, while the Masters Historic Formula One includes cars from the DFV era that followed.

In addition, Sir Lewis Hamilton will be honoured with a display of all seven of his title-winning F1 cars, courtesy of the Mercedes-AMG and McLaren F1 teams, marking the first time they have been united.

In all, the 2022 Classic is bringing more Formula One history back to Silverstone than ever before.

2. Celebrating the Best of British

In the Queen’s Platinum Jubilee Year, the organisers of the Silverstone Classic have decided to celebrate “The Best of British” both on and off the circuit. That means grids packed full of home-grown racing cars including Minis, Lotus Cortinas, Ford Capris, and Ford Sierra RS Cosworths.

There will also be a focus on the British F1 world champions, whether drivers or constructors, and British F1 cars at the event will include those from Cooper, Tyrrell, McLaren, Lotus and Williams.

In addition, many of the car clubs attending will honour landmarks in British motoring history, such as the centenary of the Austin 7, and the 60th anniversaries of the MGB, Ford Cortina and AC Cobra, all of whch were launched in 1962.

The legendary boss of the Williams F1 team died last November so the 2022 Silverstone Classic has quite rightly chosen to honour the great man by dedicating two blue-riband Masters Racing Legends races. The Frank Williams Memorial Trophy for Masters Racing Legends will see 3-litre Grand Prix cars from 1966 through to 1985 going head-to-head on track.

In addition, an FW07 that was raced in various guises between 1979 and 1982, winning the world championship twice, will be on public display throughout the three-day festival thanks to Williams Heritage. Find it in the Yokohama Legends area at Silverstone’s International Paddock.

One racing highlight will be the saloon cars (these days known as touring cars) of the Motor Racing Legends series, this year run under the banner of the “Tony Dron Memorial Trophy for MRL Historic Touring Cars”.

The Tony Dron Trophy usually features only 1970s “tin tops” within a larger field of saloon cars from later years, but for the Silverstone Classic the entire grid will honour the late Tony Dron (pictured above), the racing driver and motoring journalist who managed some giant-killing performances in Triumph Dolomite Sprints and died in November last year.

Tony Dron also happens to have been the father of this site’s editor, so look out for Will and his family if you’re there on the Saturday of the Classic.

Kicking things off on Friday evening will be the funky The Cuban Brothers before Abba tribute band Bjorn Again take to the stage. On Saturday, Gabrielle and Sister Sledge will be performing, and then Sunday’s acts will be country music duo The Shires and festival headliner Rick Astley.

Entry to all the epic live music shows is included at no extra cost in the ticket price.

Want to buy a scented candle that smells like Jeremy Clarkson’s bol**cks? Then be sure to visit the Diddly Squat Farm Shop, which will be the centre-piece of the Classic’s new Foodie Fest.

Clarkson’s Farm has been a huge success for Amazon Prime Video and the shop the Sunday Times writer set-up at his Cotswolds farm has proven so successful that the resulting traffic has not gone down well with locals. Here’s your chance to buy some produce without upsetting his neighbours.

Everything from eggs, potatoes, flour and bee juice (honey), all produced on Diddly Squat Farm, should be available, as well as Hawkstone beer — Clarkson’s favourite. Merchandise that can’t be found in the shop on Clarkson’s farm should also be on offer at the Classic. But we’d suggest getting there early as demand is likely to be strong.

“We started the little shop in a desperate attempt to sell a large pile of potatoes that we’d produced without really considering the consequences and now it has a life all of its own,” said Clarkson.

“Whether its tractor caps or cow juice [milk!] everyone seems to love what we are selling which helps to justify the day-to-day grind of farming the land. I’m sure all those going to Silverstone will enjoy seeing what we have to offer, and a few may even buy something!”

An auction will also take place across all three days should you find yourself tempted by all the gorgeous metal on show.

When is the Silverstone Classic 2022?

The Silverstone Classic is being held across the bank holiday weekend of August 26-28.

Where is the Silverstone Classic?

As the name suggests, the event is being held at the Silverstone racing circuit near Towcester in Northamptonshire.

Silverstone is around an hour from Birmingham and 1hr 45 mins from London. For those who aren’t driving, bus services run to the circuit from both nearby Milton Keynes and Northampton.

What is the best day to go to the Silverstone Classic?

Each day of the festival will see plenty of racing, and attendees are unlikely to be disappointed whichever day they go. Friday, however, although it’ll see tons of actions, is a qualifying day with drivers battling it out for grid position for the racing proper on Saturday and Sunday. Aside from that, both Saturday and Sunday are packed.

What is the race schedule for the Silverstone Classic?

How much are tickets?

There’s still plenty of ticket availability, with access to all three days of the festival from £133 with kids under 15 going free. Tickets for Saturday start from £84, with tickets for the slightly quieter Sunday starting from £45. Visit https://www.silverstone.co.uk/events/the-classic/ticket-info

Can you camp at the Silverstone Classic?

There’s a well-appointed and spacious campsite adjacent to Silverstone with plenty of room for tents and campers. Prices for a tent pitch start from £75 running all the way up to a starting price of £220 for a camper and two cars with an electrical connection.

Which musical acts are playing?

The Silverstone Classic has some great musical acts lined up for Friday and Saturday including Rick Astley, Gabrielle, Sister Sledge, well-known Abba tribute act Bjorn Again and plenty of others.