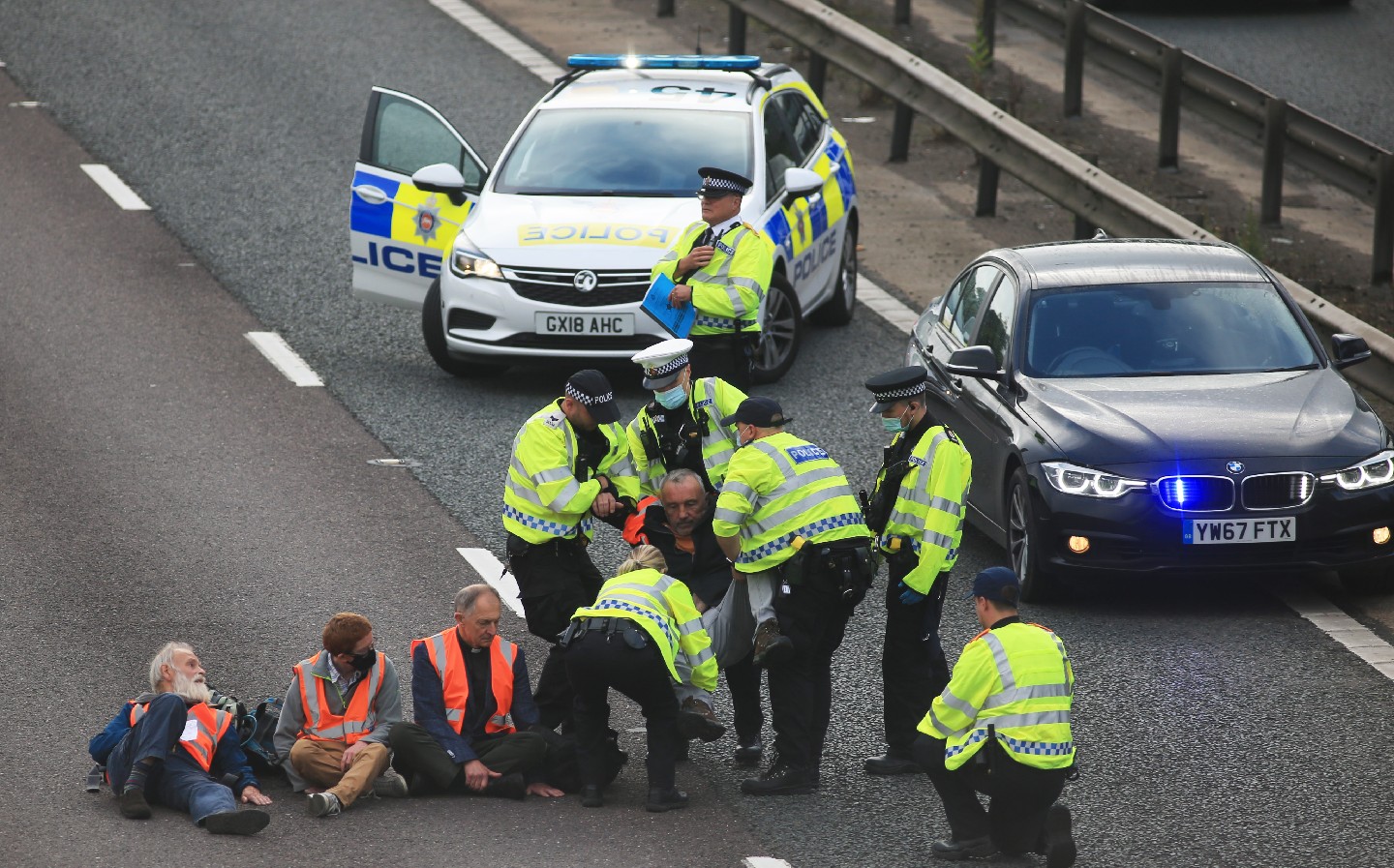 INSULATE Britain activists face prison for future M25 protests after an interim court injunction to ban the demonstrations was granted.

Effective from today, September 22, demonstrators taking part in any protests like the ones already seen could face charges for contempt of court, with penalties including a custodial sentence of up to two years or unlimited fines.

Police will also be able to detain demonstrators on remand to prevent them from returning to join future protests.

Shapps took to Twitter this morning to make the announcement.

Invading a motorway is reckless & puts lives at risk. I asked National Highways to seek an injunction against M25 protestors which a judge granted last night. Effective later today, activists will face contempt of court with possible imprisonment if they flout.

The Home Secretary, Priti Patel, who previously branded Insulate Britain’s “guerrilla tactics” as “selfish”, added: “We will not tolerate lives being put at risk.”

I can confirm this Government and @NationalHways are taking action to bring the ongoing #M25 protests to end with an important injunction so people can get moving again.

We will not tolerate lives being put at risk.

Those who continue to do so risk imprisonment.

Insulate Britain responded to Shapps’s tweet saying: “The government is reckless and is putting lives at risk with its inaction on #insulation. How many lives have been lost already due to poorly insulated leaky homes? How many will be lost because of climate collapse? #getonwiththejob.”

The injunction follows two weeks of protest that saw demonstrators from Insulate Britain block parts of the M25, London’s orbital motorway, calling for government action on insulating Britain’s homes, which it says are some of the oldest, leakiest and least energy efficient in Europe.

The protests, some of which involved demonstrators gluing themselves to the road, resulted in long tailbacks and, subsequently, over one hundred arrests in Essex, Hertfordshire, Surrey and Kent on suspicion of public nuisance and wilful obstruction. 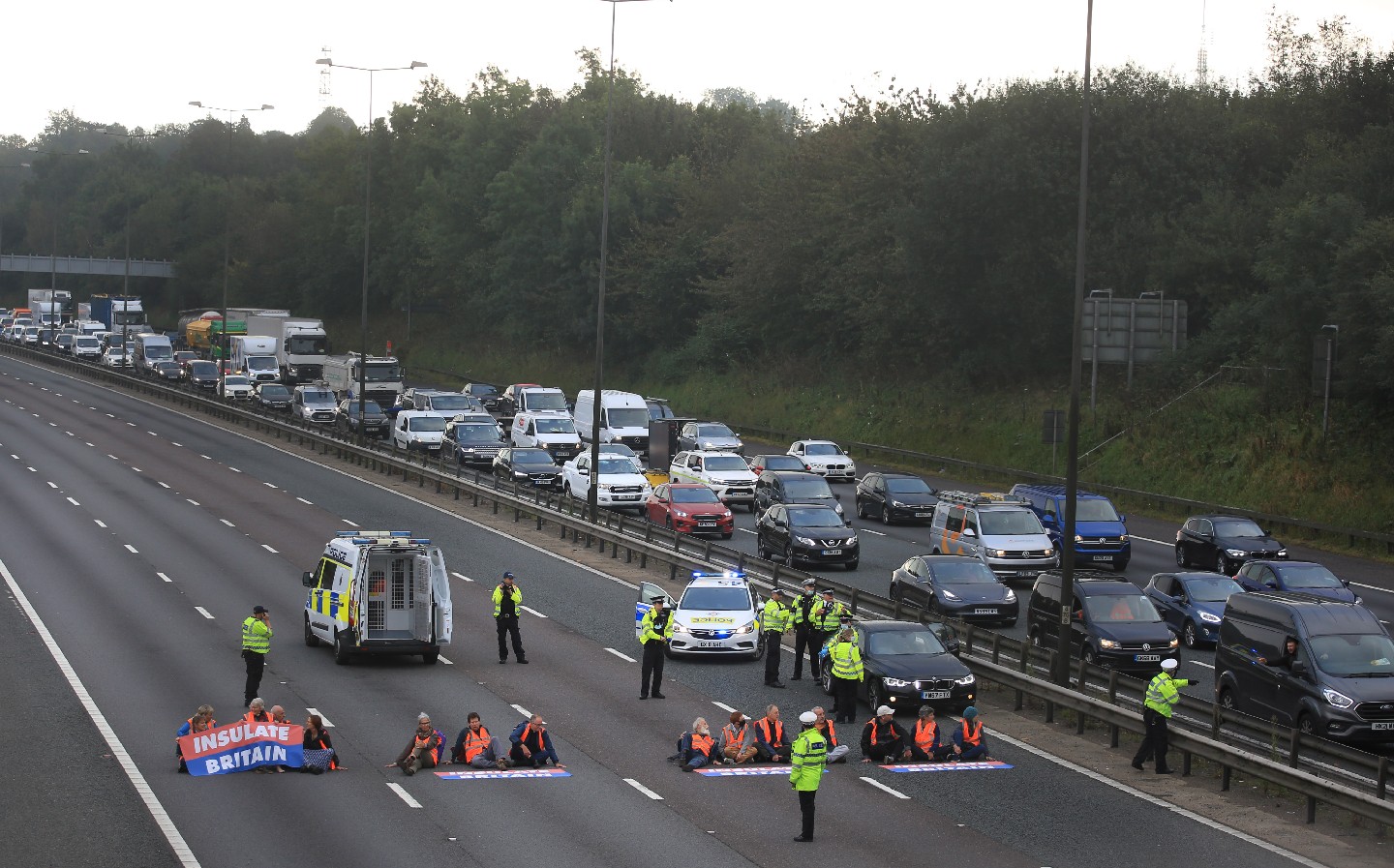 The most recent demonstration took place yesterday near Junction 10 outside Woking in Surrey, resulting in thirty-eight arrests.

George Eustice, the Environment Secretary, said on Sky News this morning that the purpose of the injunction was to “give police stronger powers to be able to intervene pre-emptively to stop these protests happening so that you are not getting a situation where you have to wait for them to sit on the road, cause chaos and then have to remove them after the event.”

Speaking to The Times yesterday, Lisa Townsend, Surrey’s elected police and crime commissioner said: “I think a short prison sentence may well form the deterrent that is needed, if people have to think very, very carefully about their future and what a criminal record might mean for them.”

Some of the protestors, however, feel that they have no choice other than to take direct action in light of government inaction towards what they consider to be the greatest existential threat of our time.

Len Herbert, 65, a retired engineer from Dorset, who was arrested a number of times in the last week said: “I would rather not block roads but for years I have participated in every other form of activity to try and get our government to take notice of the climate and ecological emergency, but they continue to ignore the scientists. Insulating homes is a quick win to reduce carbon emissions and would hugely help this and reduce bills for those in fuel poverty.”

Another protestor, 63, who was also arrested several times said: “Joining these actions has been an incredibly hard thing to do but we’re not expecting to be popular. It is a fact that now 2.5 million homes in the UK are in fuel poverty. It is a fact that children in poorly insulated and cold homes already struggle with their homework, and it is a fact that the parents of these children have to make a choice between heating or eating. In my opinion, in Britain in the 21st century that is totally unacceptable.”

Although Insulate Britain has said that its campaign would continue indefinitely, it remains to be seen what effect the injunction will have.