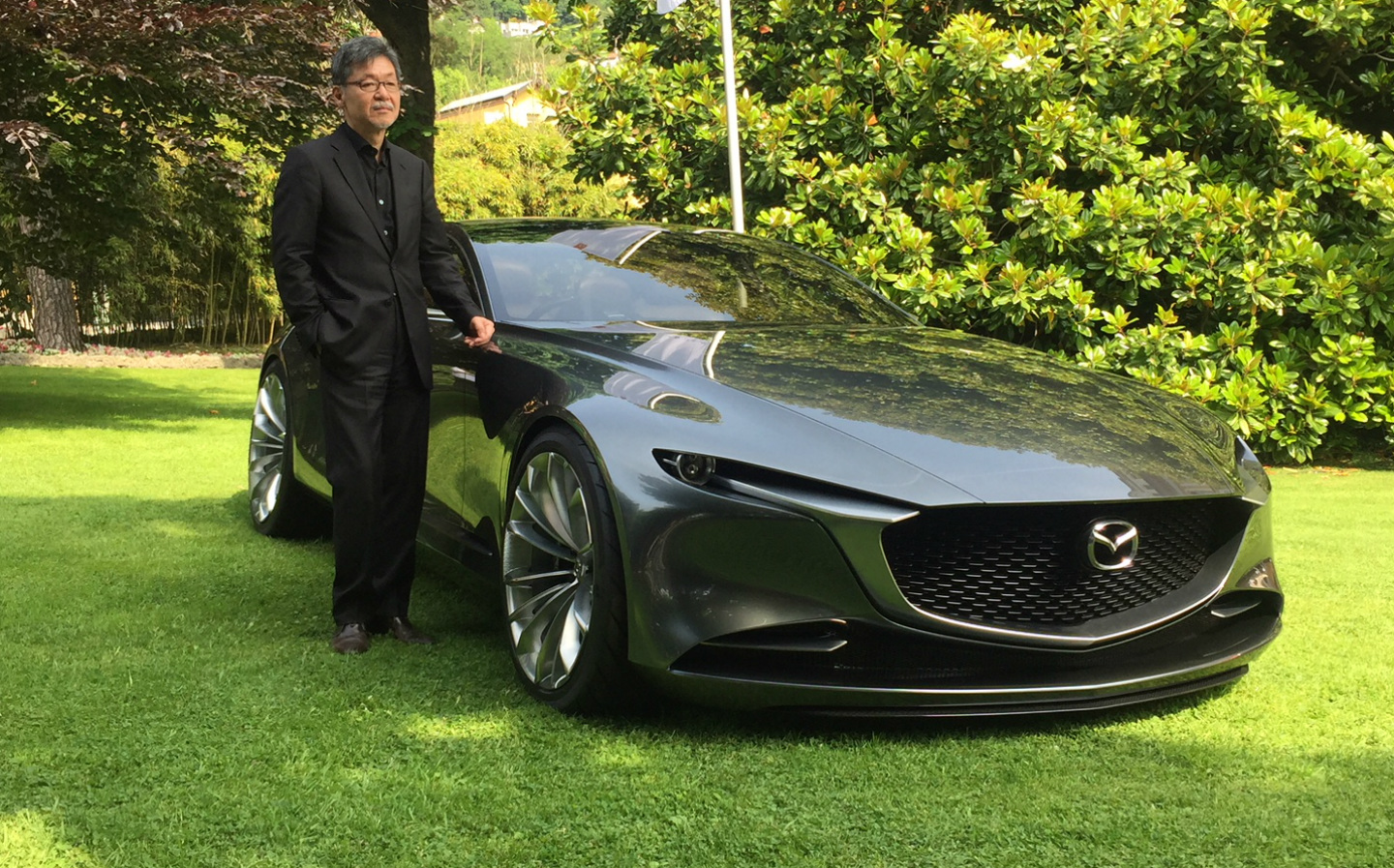 Alongside some of the most famous sports cars in the world, including the Aston Martin DB5 that appeared in Goldfinger, a Ferrari 250 GTO and a Lamborghini Miura, the Vision Coupe looked perfectly at home.

It begs the question; when will Mazda make a successor to the RX-7 sports car?

According to Ikuo Maeda, Managing Executive Officer at Mazda and the man leading its design department, the Japanese car maker is acutely aware of the need for a flagship sports car – one that could even be powered by a new generation of rotary engine, which operates in a different way to the convention piston-powered motor.

Maeda told Driving.co.uk: “If we [Mazda] give up on it, then the rotary engine will disappear.”

His father designed the original RX-7, from 1978. Asked how fulfilling it would be to continue that legacy, and create a new generation of sports car for Mazda, Maeda replied: “This is my life’s work and dream.”

In the past, Maeda has commented that Mazda can only build a new sports car when it has enough money to invest in the project.

Asked whether the company is now in that position, he said: “At the moment, we still have to earn many monies to invest in a new sports car.”

Maeda says that popular cars such as the CX-3 and CX-5 sport utility vehicles are selling well and are key to the company building the funds that Mazda needs to create a new sports car.

“If we succeed and reach our targets, then senior management [will] decide on the company’s direction and whether we produce a sports car.”

Could the process be fast-tracked by producing a new RX-7 in collaboration with another car company, similar to how Fiat turned to Mazda to create its 124 Spider? According to Maeda, that would go against the ethos of everyone within the engineering department.

He said: “They truly want to produce a car under their own philosophy.”

When the RX Vision concept car was revealed at the Tokyo motor show, in 2015, Mazda executives hinted that any subsequent production version would be a heck of a way to celebrate Mazda’s centenary in 2020.

At the launch of the RX Vision, Kiyoshi Fujiwara, Mazda’s head of research and development, said a two-seat, rotary-powered sports car would take on the Porsche Cayman, built around a new front-engined, rear-wheel drive platform that would help make it lighter than the German coupe. Another obvious rival is the Alpine A110.

A rotary engine has triangular rotors mounted in an ovoid chamber. Fuel and air are drawn into the three gaps between those rotors and the fuel ignites in each gap sequence, making the rotors spin at high speed. That force is harnessed to drive the wheels.

The system is generally not as efficient as a conventional engine. But it does have its advantages, being compact and light — and characterful to drive.

The Mazda sports car would be turbocharged but an additional plug-in hybrid version is reportedly to be in development. This would help meet Mazda meet the average emissions targets for its range of cars, as cities including London and Paris prepare to ban conventional petrol and diesel models.

He said: “We have not left rotary, we keep updating it and keep the technology alive.”

Whether the new sports car appears in showrooms by 2020 depends on how profitable Mazda remains, and whether the engineers can perfect the rotary engine’s reliability.

Engineering boss Fujiwara has previously revealed that a rotary-powered sports car requires a development period that is two or three times as intensive as Mazda’s typical timeframe for new models.

“We have had quality issues with our rotary engines in the past, and want to make certain we don’t cause customers any more problems,” he said.

Perhaps, if enough families snap up Mazda’s SUVs, drivers will be able to treat themselves to a new, rotary-powered sports car and plan their perfect road trip around the Italian Lakes.