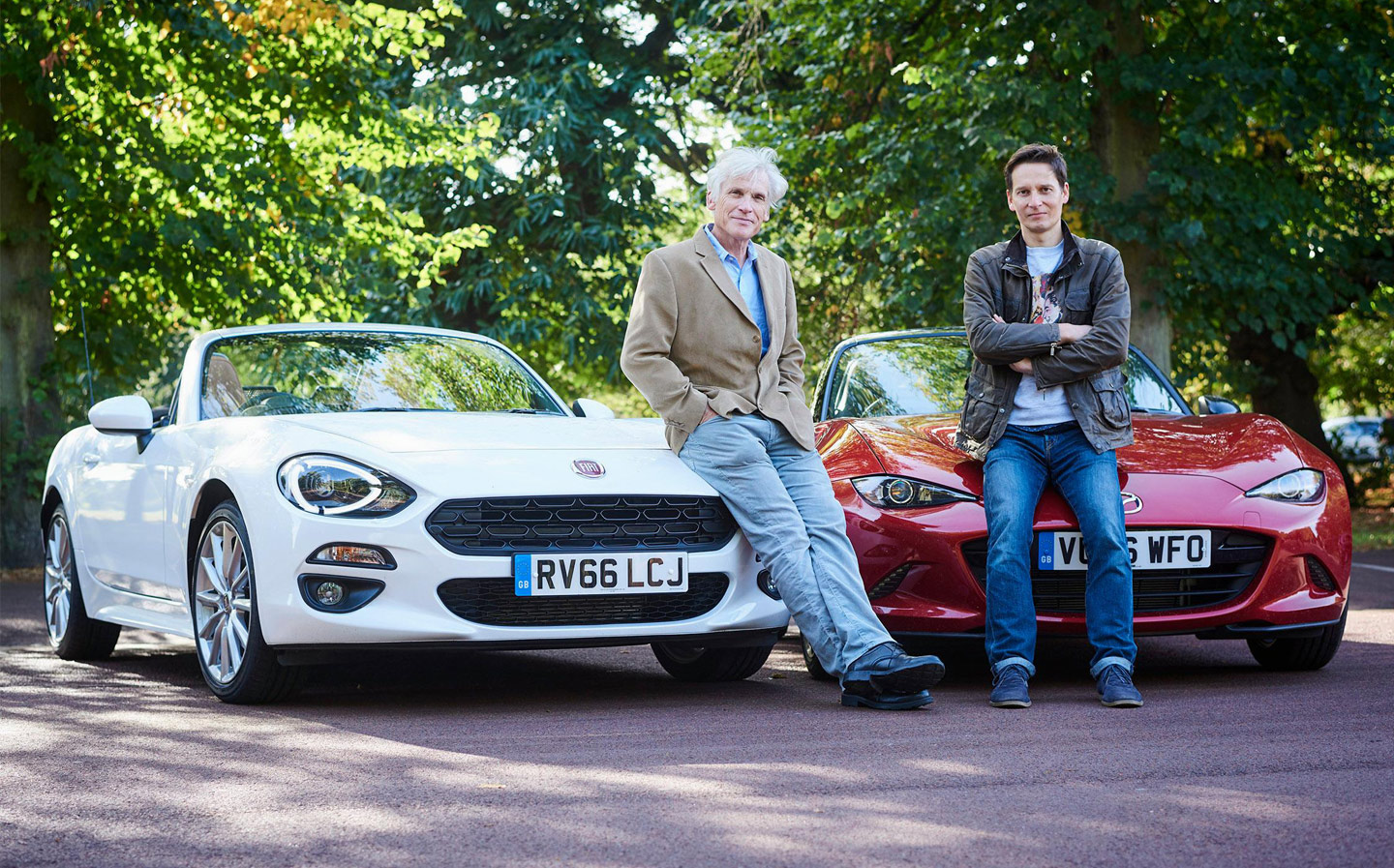 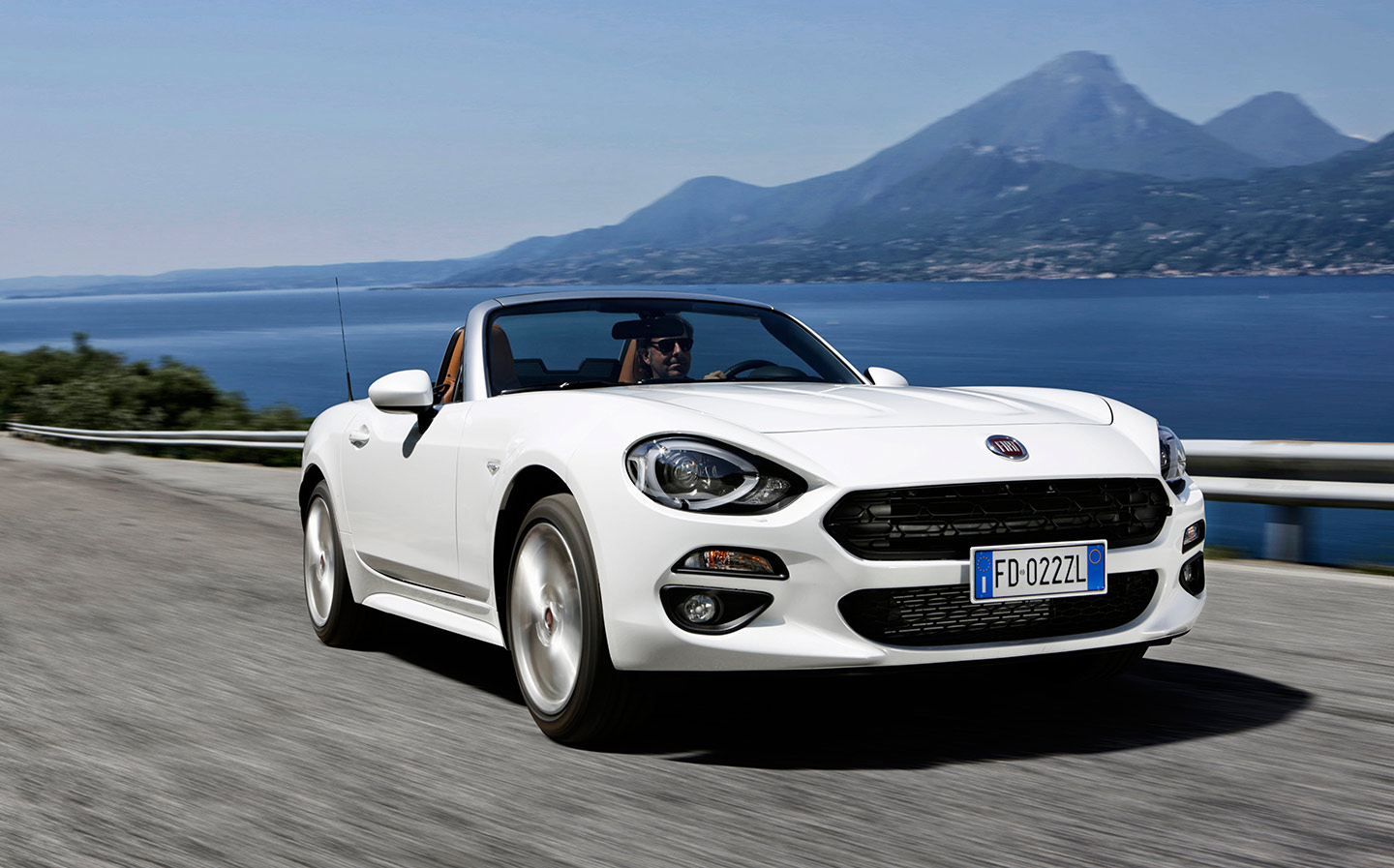 BACK IN the days when U-tube was a pipe under the sink, tweets were birdsong and we had an odd thing called leisure time, fans of open-top motoring could choose from the MGB and MG Midget, the Sunbeam Tiger, the Triumph Spitfire, the Lotus Elan, the Fiat 124 Sport Spider and various Austin-Healeys. Even until quite recently Honda made the S2000, Toyota the MR2 and Fiat the Barchetta. These days if you want a simple two-seat roadster, the choice begins and ends with the Mazda MX-5.

Car company bosses have largely baled out of making affordable sports cars to concentrate on mass-market econoboxes. Either that, or the proud names that adorned the chassis of those lightweight sports cars of yesteryear have ceased to exist. So the return of the Fiat 124 Spider — one of the great names from that era — is a thing to celebrate. But wait: the latest addition to Fiat’s range is just a rebadged MX-5, so does it really offer any more choice?

As evidence of how limited are the differences, consider the fact that MultiAir engines built at Fiat’s Termoli plant in Italy are shipped to Mazda’s Hiroshima factory, where they are installed in MX-5 chassis. Mazda makes the 124’s body, lights and interior — including the clever soft top that unclips and flips back with a one-handed movement — before sending the finished car back to Livorno, in Italy, for onward shipment to the UK.

The fact that there is an MX-5 underneath the 124 Spider’s pretty exterior is on the whole a good thing, because it means the car is all about being affordable and fun. Prices start at £19,545 for the standard Classica version and rise to £23,295 for the Lusso Plus trim. To put that into context, the cheapest two-seat roadster from Porsche — the 718 Boxster — costs £41,739. 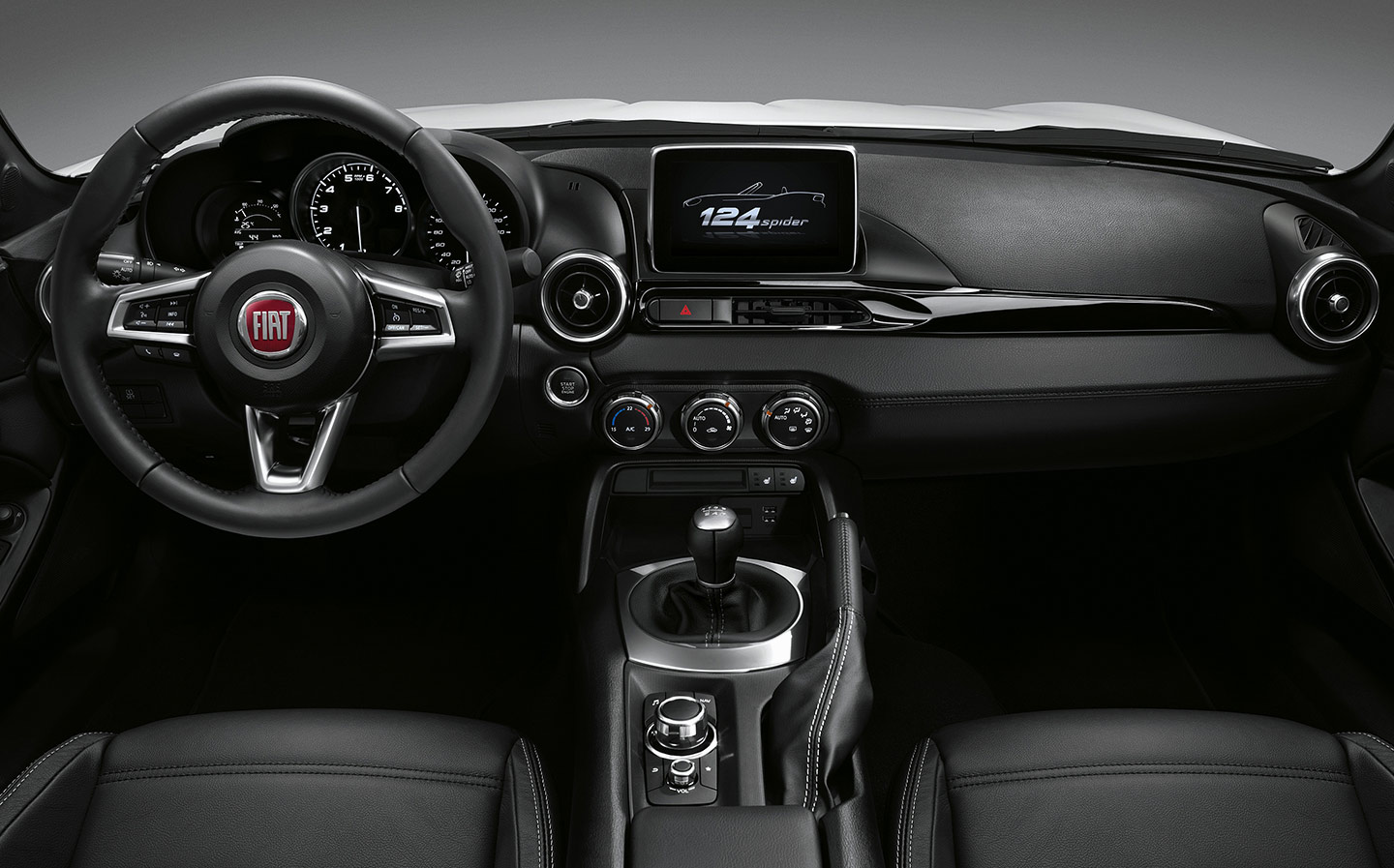 You may wonder why Fiat bothered to release what amounts to a cover version of an already successful single without really improving it. Some drivers will remember what wags once said Fiat stood for: fix it again, Tony. So rebadging can’t be about reassuring customers of the car’s excellent build quality.

Apparently it’s about marketing. There are people who want to own a two-seat sports car yet for whom a MX-5 holds no appeal. Whisper it, but some regard the MX-5 as a little tame and unadventurous. Hence Fiat’s advertising campaign with the caption “Rebel rebel” and “Reborn to be wild”. In other words, the 124 Spider is for people who want something more racy and with a bit more attitude. Fiat’s marketing people liken it to the way fans of Sid Vicious’s version of My Way would never buy the Frank Sinatra original.

Which is strange because when you put the two cars side by side, that analogy is the wrong way round. The Mazda is more gritty, the 124 more aloof and sophisticated. The latter is the car that Audrey Hepburn would have driven in How to Steal a Million, but for the fact that the film had already started production when the original Sport Spider came out 50 years ago (she ended up driving an Autobianchi Bianchina Special cabriolet instead). Certainly when you’ve driven both, it’s the MX-5 — far from being a poser’s car — that feels the more red-blooded.

That said, the 124 would still be my choice, just for the fact that it will be rarer and its looks will turn more heads. The two-tone finish inside is an improvement on the Mazda’s rather bland interior. But where’s the rebel under the bonnet? On a chilly day, you flick back the top to grab some autumn sunshine, hoping to enjoy a blast through the fallen leaves. All good, until you put your foot down and, instead of a dollop of power, the 1.4-litre MultiAir delivers a dribble. 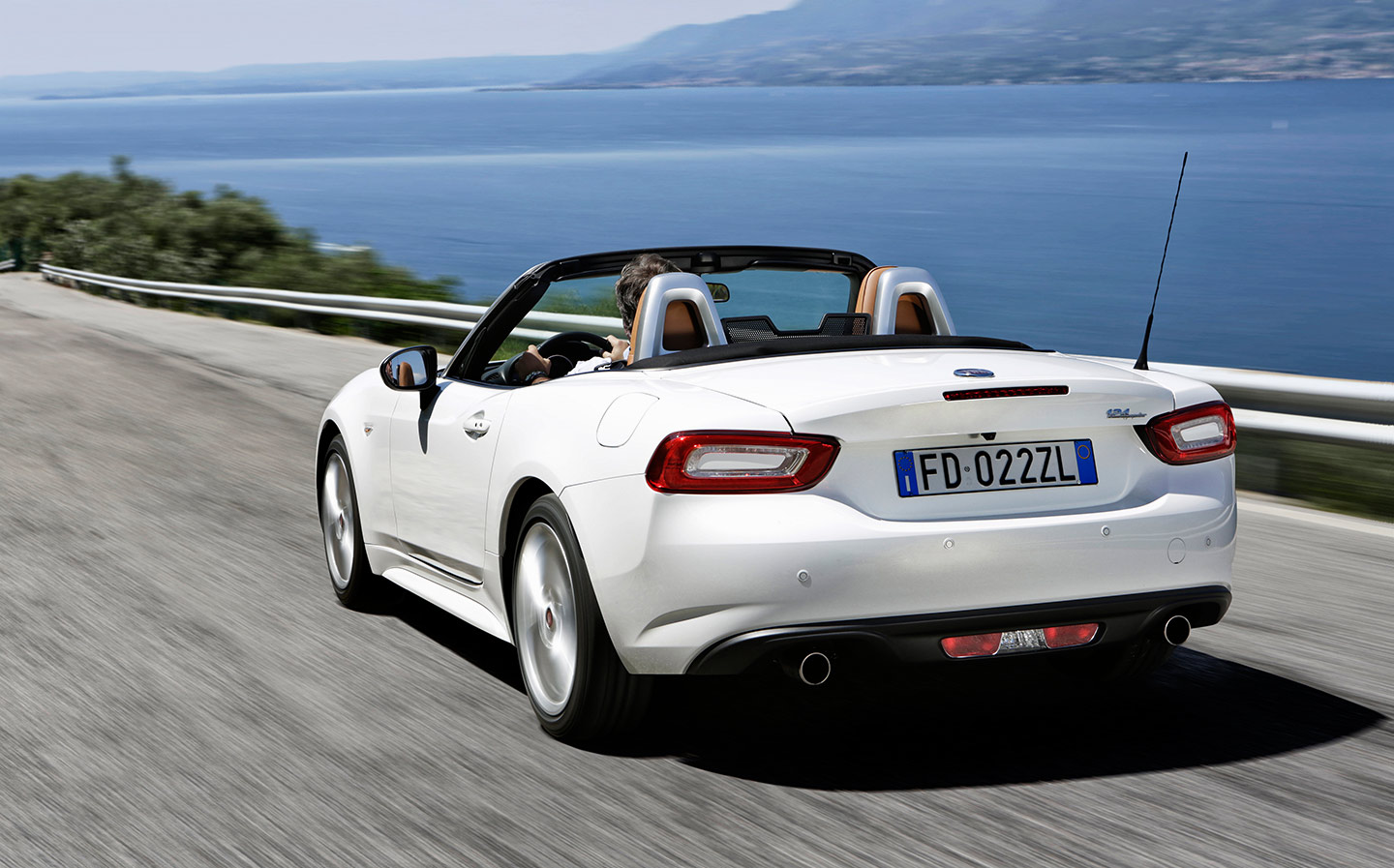 Fiat says it will zip from 0 to 62mph in 7.5 seconds, but it never feels that energetic. Hepburn could have removed her headscarf without risking her hairdo. If Fiat wants to live up to its advertising, it should install the 1.75-litre engine from the Alfa Romeo 4C. That would be wild.

There is an Abarth version of the car that promises more oomph. It costs an extra £6,270, though, and the engine is the same, albeit retuned. Fiat is on to a good thing here but — memo to Turin — turn up the power, please, if you want to do it Sid’s way. 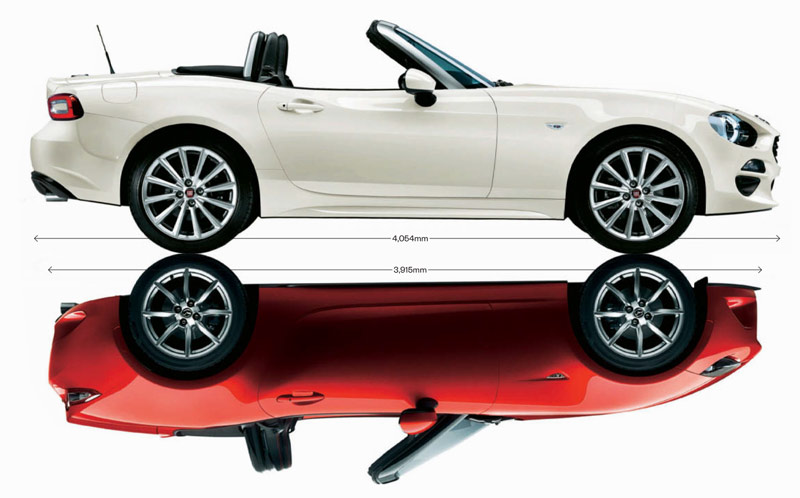 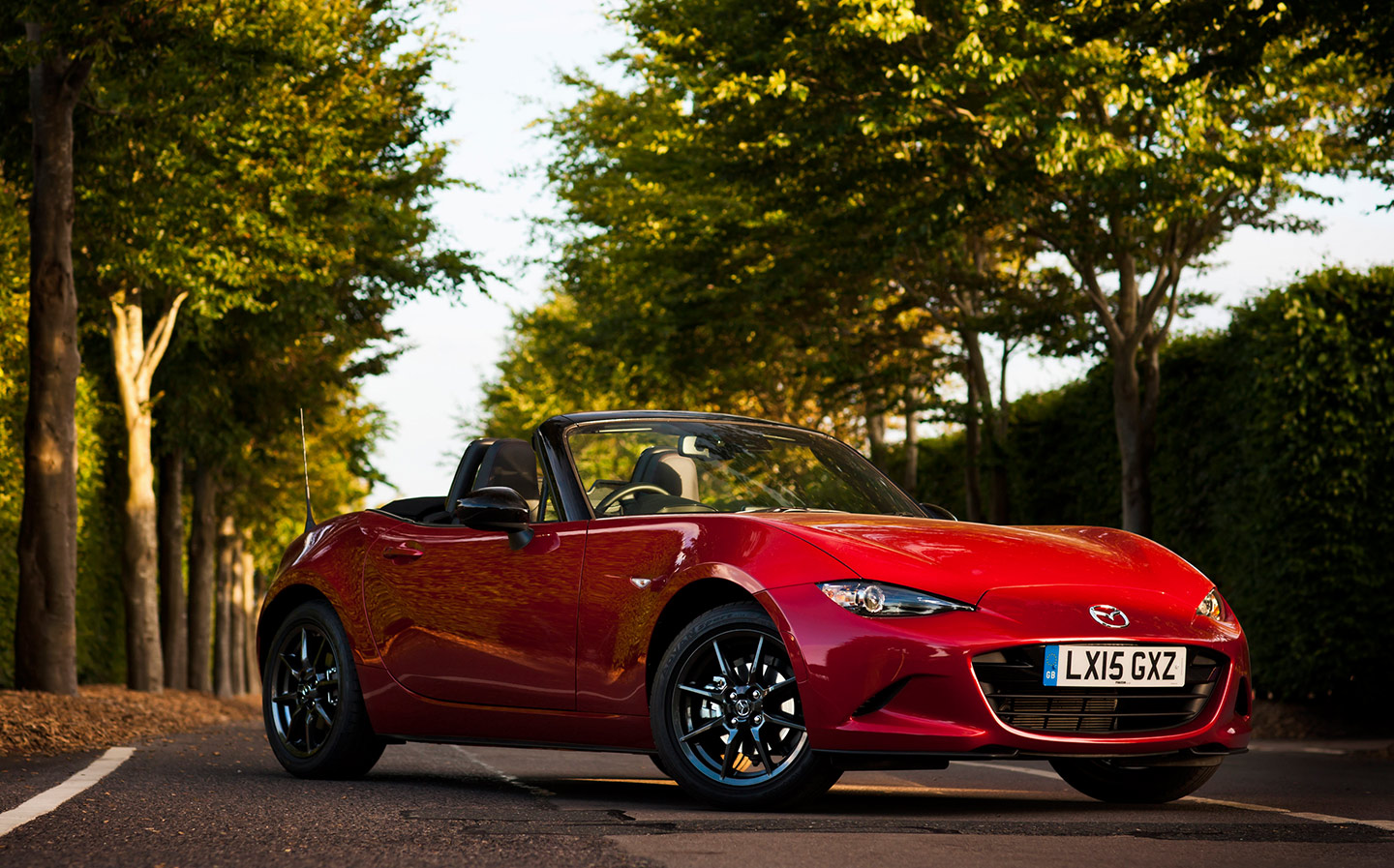 WHEN YOU find a formula that works, stick to it. Coca-Cola, Kellogg’s cornflakes, Church’s brogues — they seem all the more appealing for standing still in a fast-paced world. Mazda’s MX-5 is one of the few cars to stick to its guns. It is small enough to scoot through a width restrictor without fear, light enough to feel responsive at all speeds and priced low enough to clinch the deal.

Time and time again, the Japanese company has resisted the temptation to make it larger or more comfortable or to festoon it with hi-tech trickery. It’s an approach that means Mazda has long had the market for roadsters around the £20,000 mark sewn up. In fact, as the company never tires of telling us, the MX-5 is the bestselling roadster of all time.

So it’s hard to fathom the logic in giving your opponent the ammunition with which to shoot you by sharing the MX-5’s platform with it. Had the sake fund run dry? Did an executive blow all the company’s money in the casino? What was Mazda thinking? We’ll never know. But the good news, perhaps, is that the choice of £20,000 roadsters has now, er, doubled.

The Fiat 124 Spider will need to be good if it’s to hold a candle to the MX-5. The Mazda is one of Driving’s few five-star cars. Even a certain J Clarkson described it as a “full-on five-star gem”. 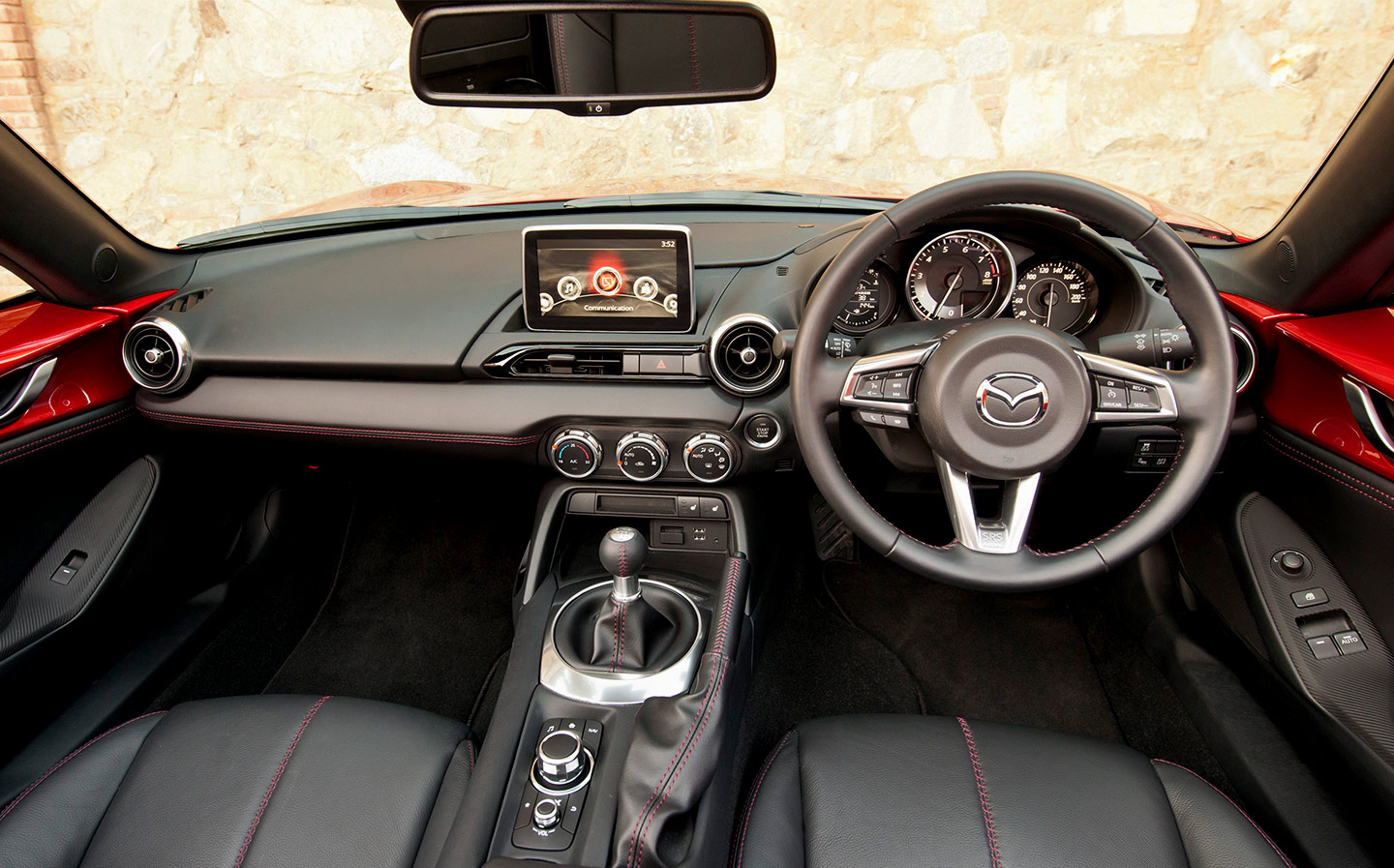 If the Mazda looks as dainty as a daisy, the Fiat appears bloated. Its blunt nose and big bottom suggest someone’s enjoyed more than their fair share of the pies. And the retro-design thing doesn’t do it for me; the Mazda looks forward, with a modern twist on a classic formula, whereas the Fiat attempts to ape the past and trace the bodywork from an era when it made its own crowd-pleasing sports cars. Can you imagine Apple trying to bring back the original, colourful iMac G3? No. So why is Fiat happy to admit to the world that it doesn’t have any new ideas?

You don’t need to rev the engine and shift the stubby gearlever to feel tingles of excitement in an MX-5. Your bum’s a few inches from the ground, your toes are almost stroking the engine and the roof drops with the flick of a catch and shove of an arm. “Enjoy the ride,” it seems to say.

OK, so you’re swimming in a sea of black plastic trim, black leather and black carpet. But, importantly, the heater and heated seats will keep the driver and passenger toasty on a crisp winter’s day, and the Bose audio system is never drowned out by the roar of air overhead.

There are two engines to choose from: a 1.5-litre with 129bhp and a bigger 2-litre unit producing 158bhp. You’ll probably be able to justify paying the extra for more oomph if you are a fully fledged petrolhead who counts cars to get to sleep. But, to be honest, the sweet-sounding 1.5-litre engine is just fine.

It enjoys being taken by the scruff of the neck and revved to the red line. And because there’s not a turbocharger in sight, the throttle response is immediate and the engine note is as crisp as a snare drum. 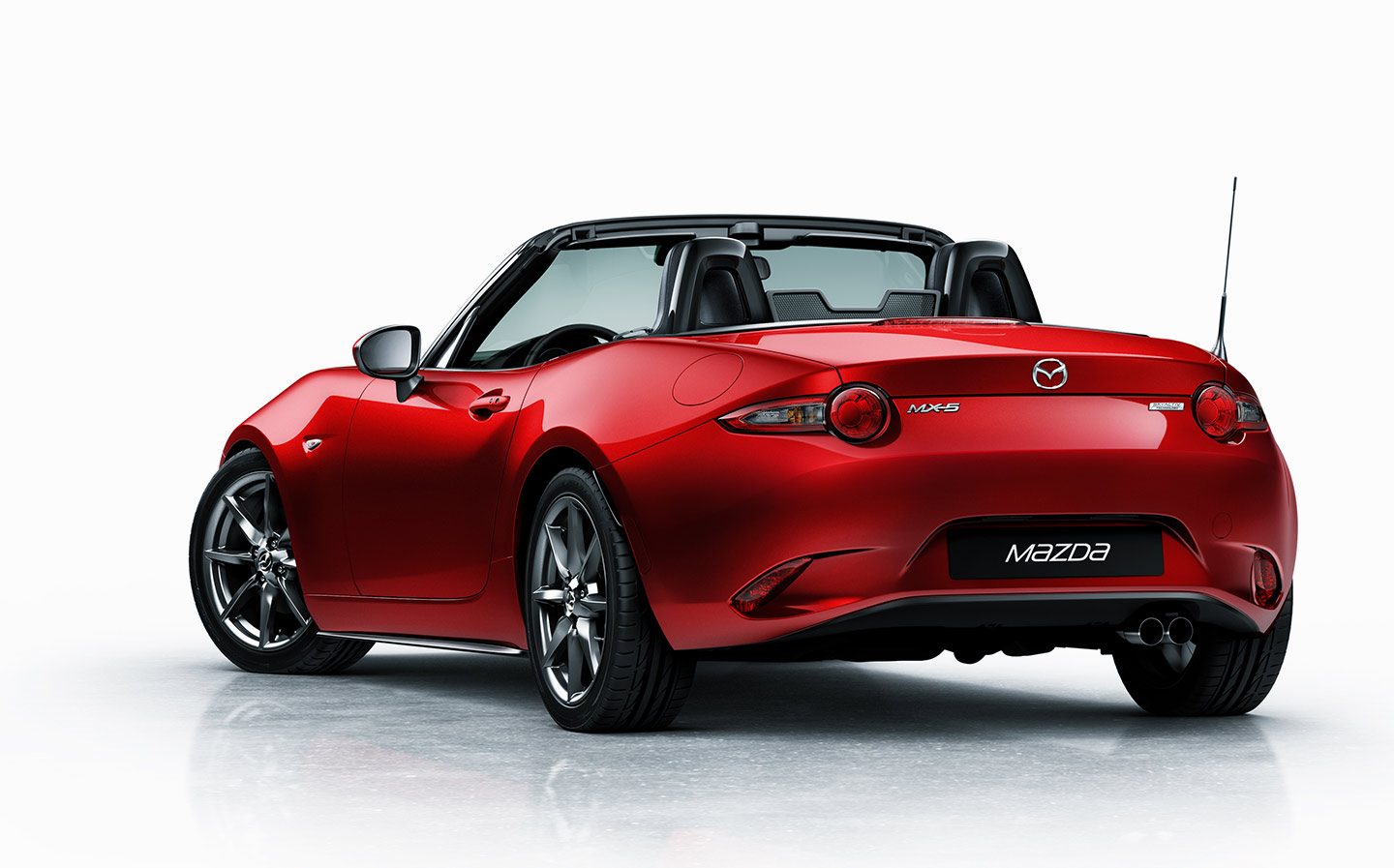 Turbocharged engines such as the one in the 124 Spider are in vogue, and most car makers say they are needed if increasingly stringent emissions targets are to be met, but Mazda has proved that’s nonsense. The likelihood is that it’s cheaper to bolt on a turbo and hope for the best rather than run a fine-tooth comb over every single component of the car and find efficiencies that way — as Mazda has done.

It’s not a quick car, but the MX-5 party trick is that it feels fast. It feels alive. You can play around with the brakes, gearshift, steering and throttle, and every little input has the car up on its tiptoes and responding obediently.

It’s an antidote to the hordes of vastly more expensive sports cars with stiff suspensions, angry engines and huge tyres. Proof that money may buy you a Ferrari but it can’t buy you happiness.