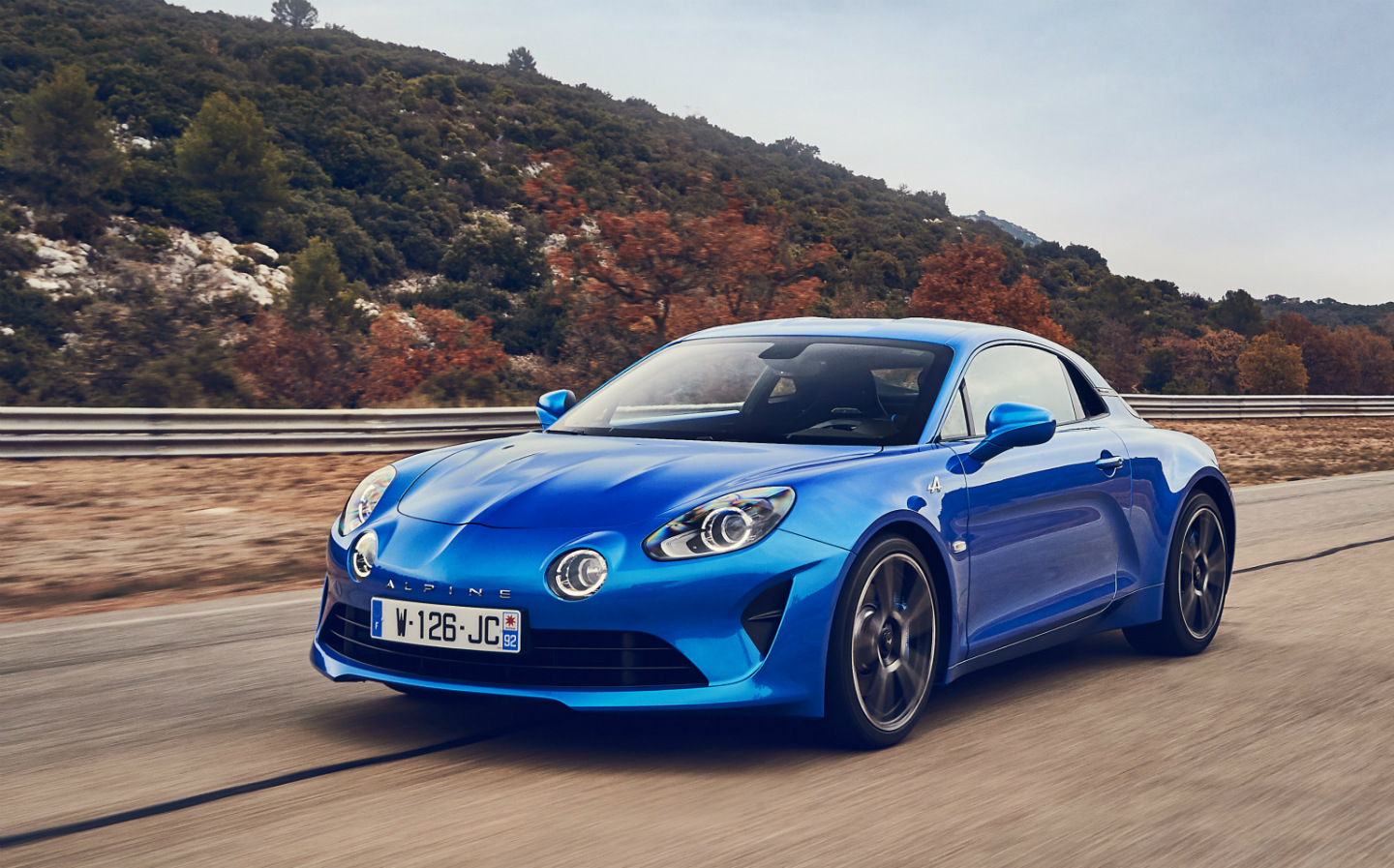 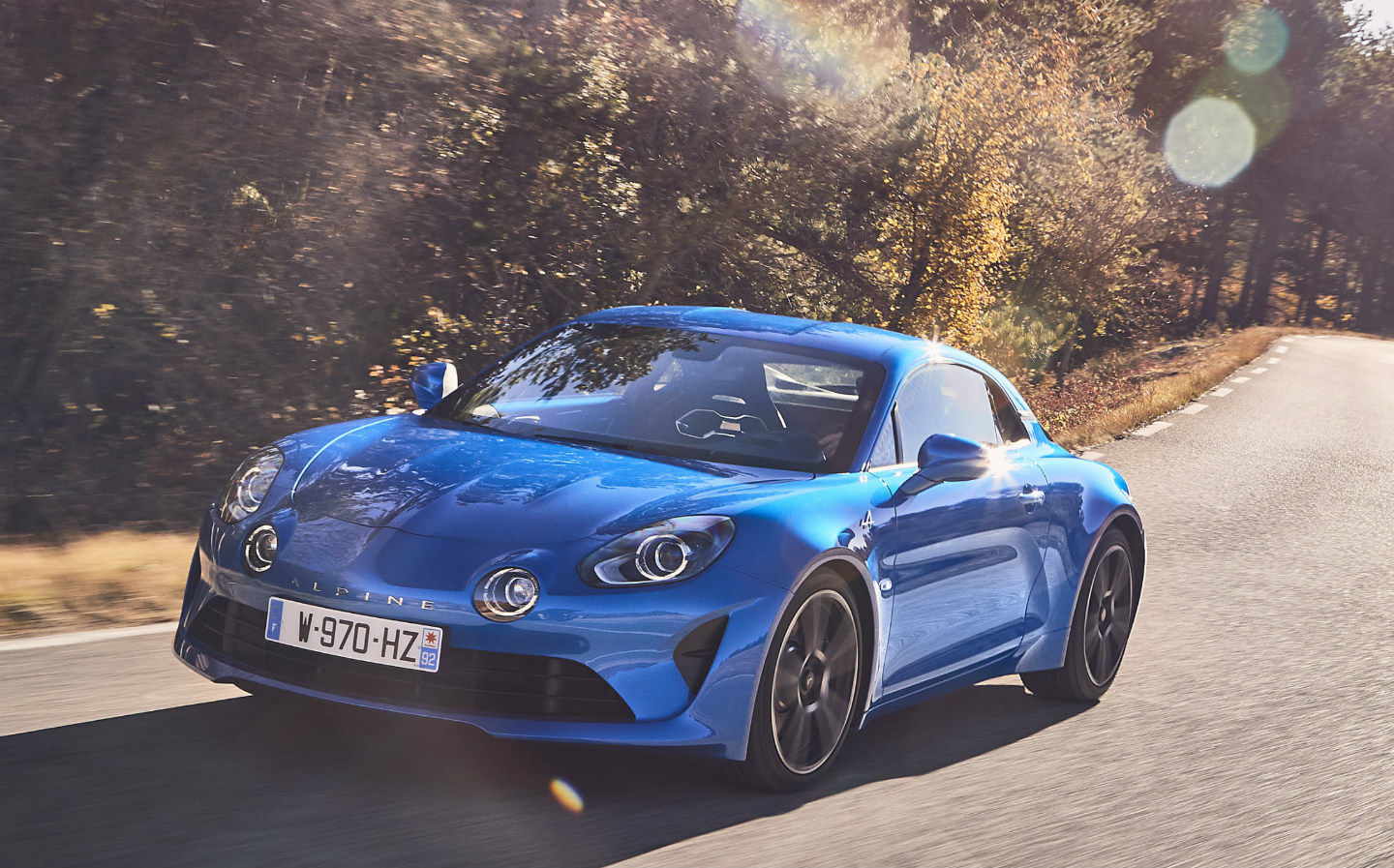 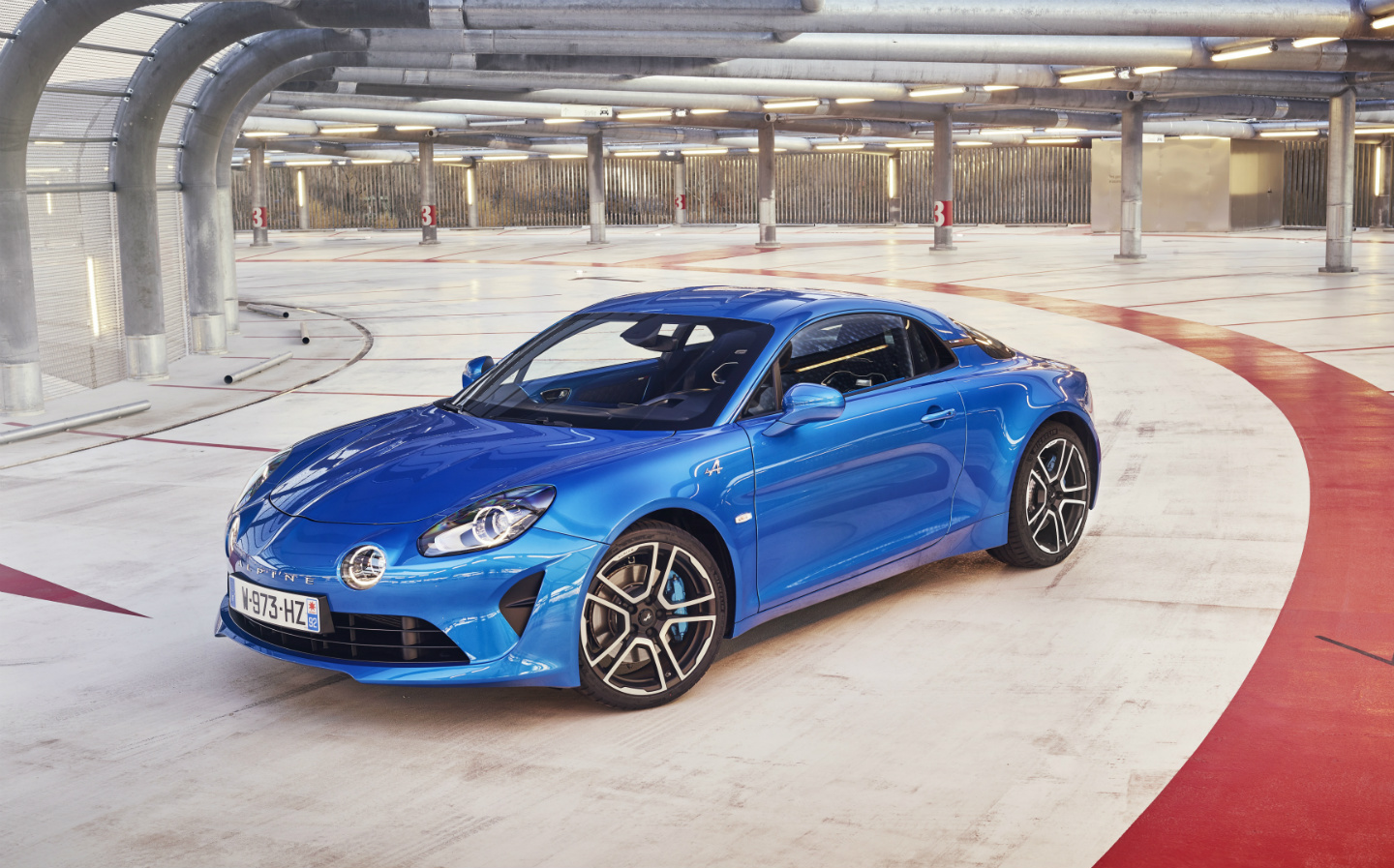 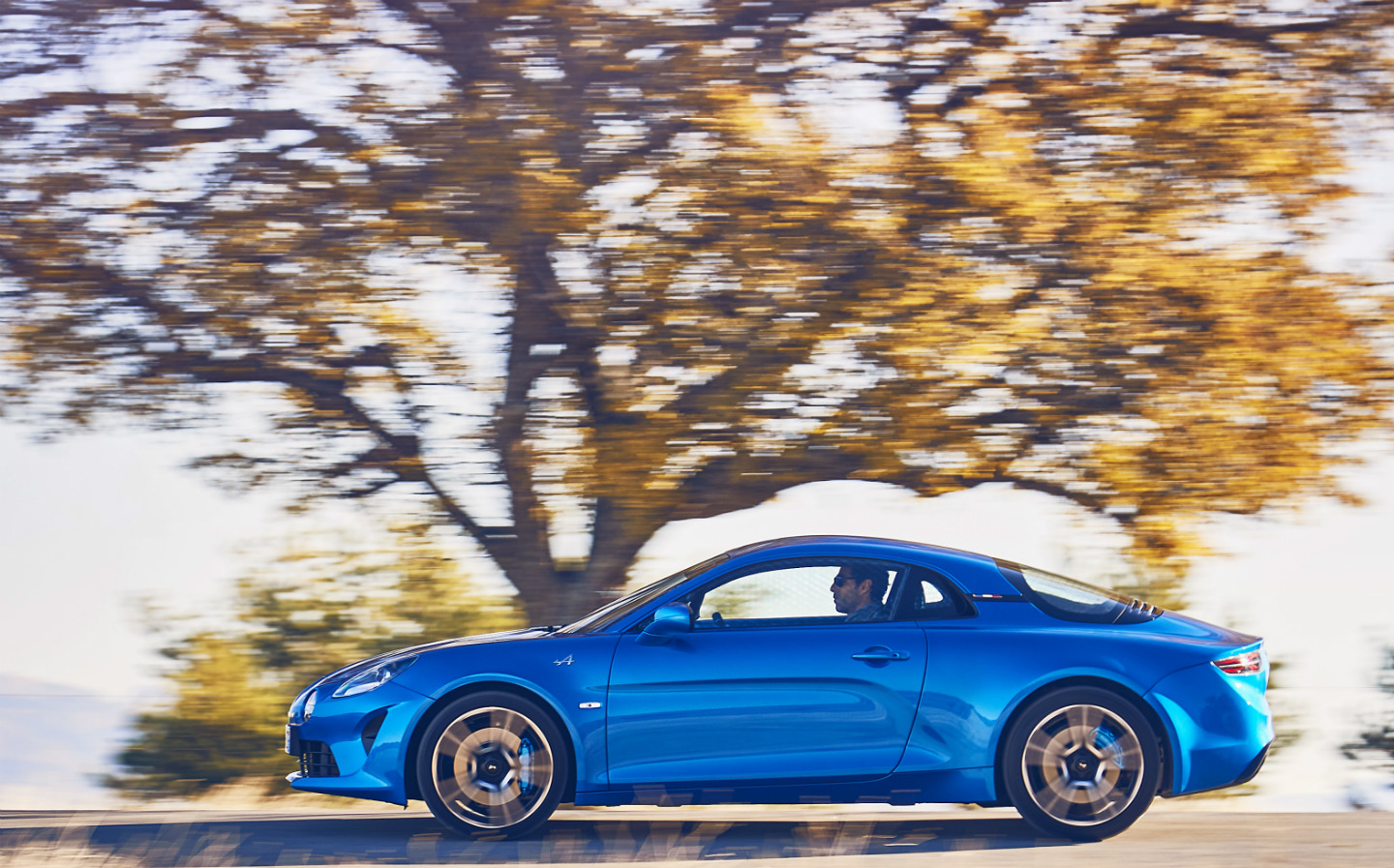 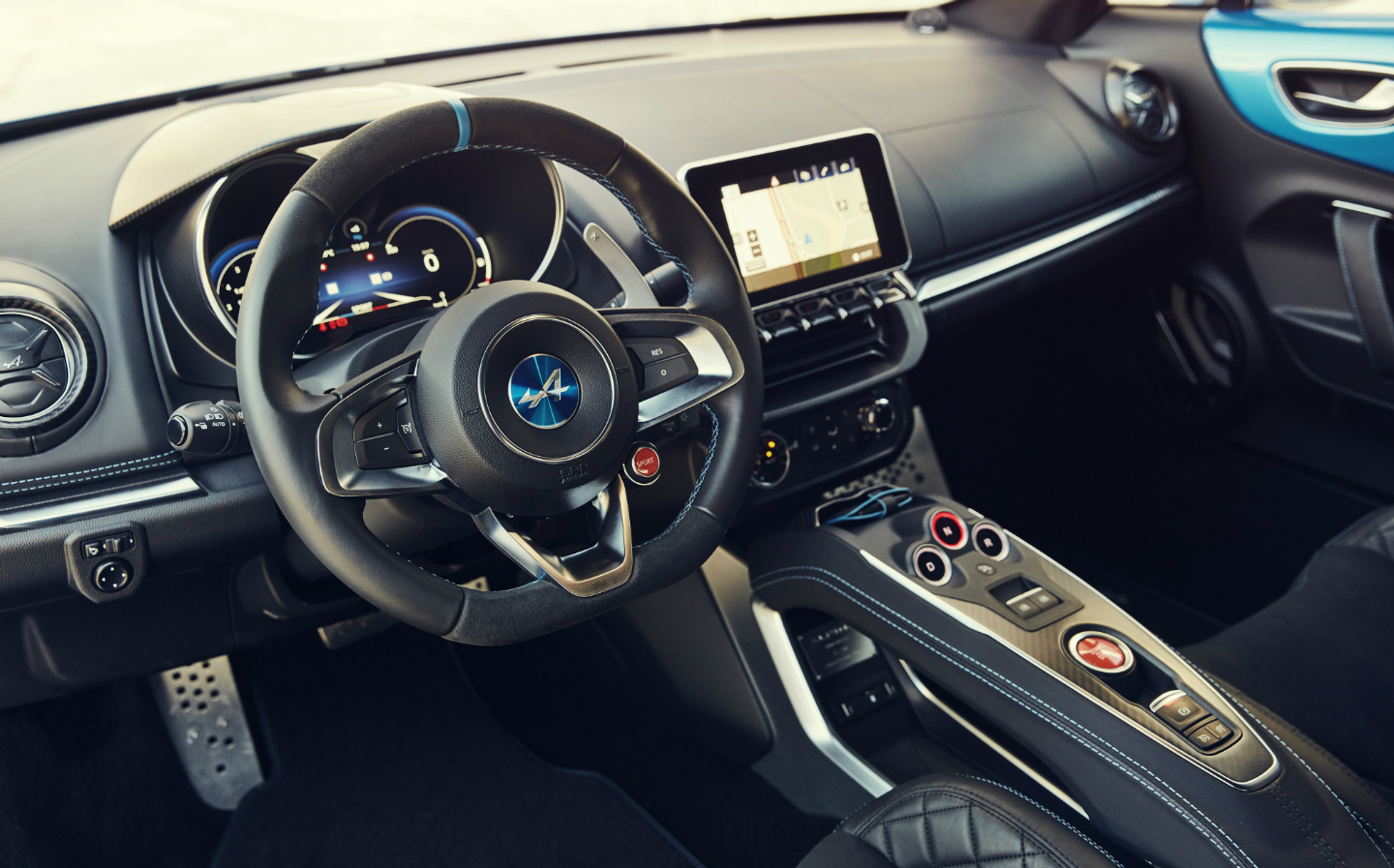 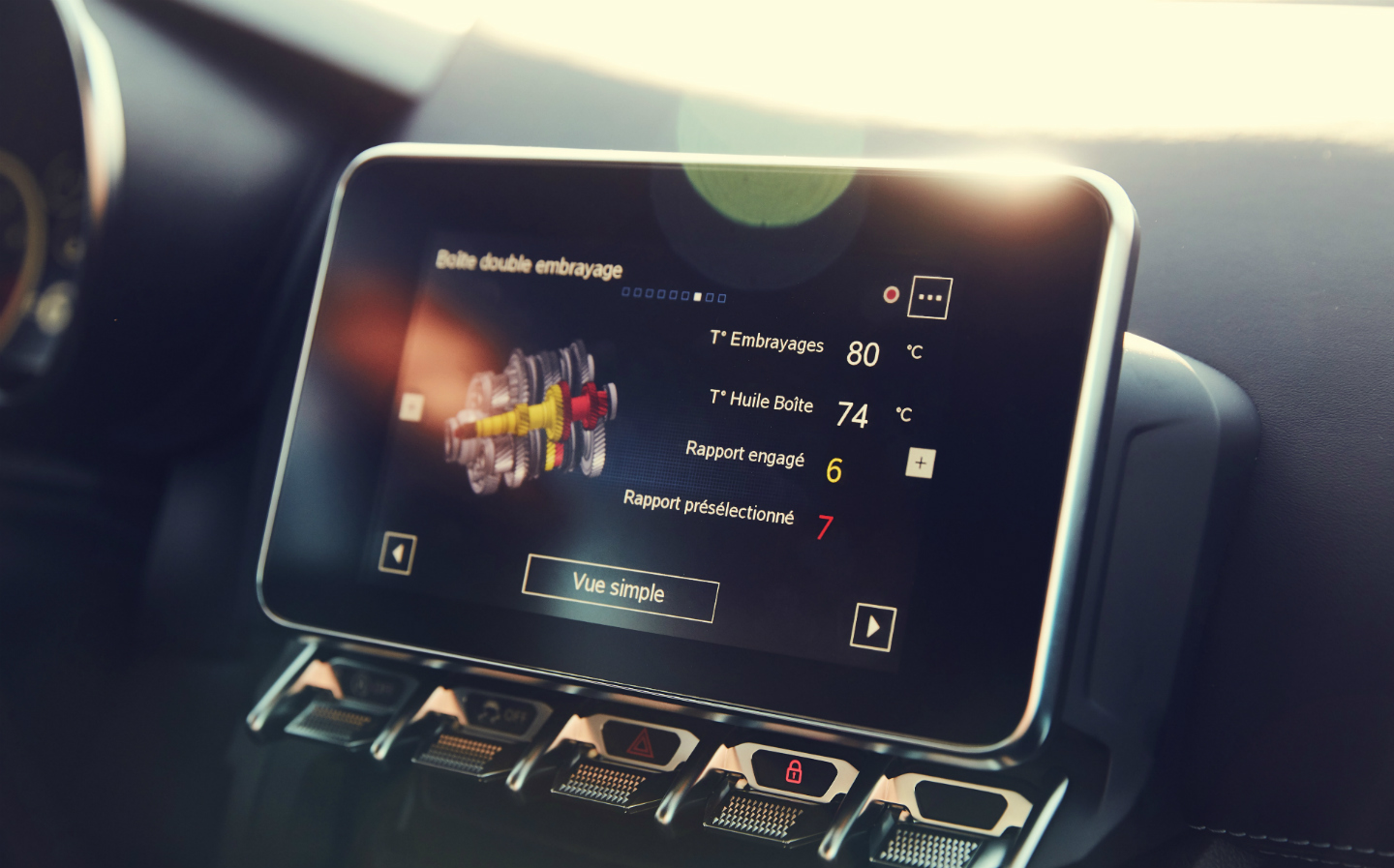 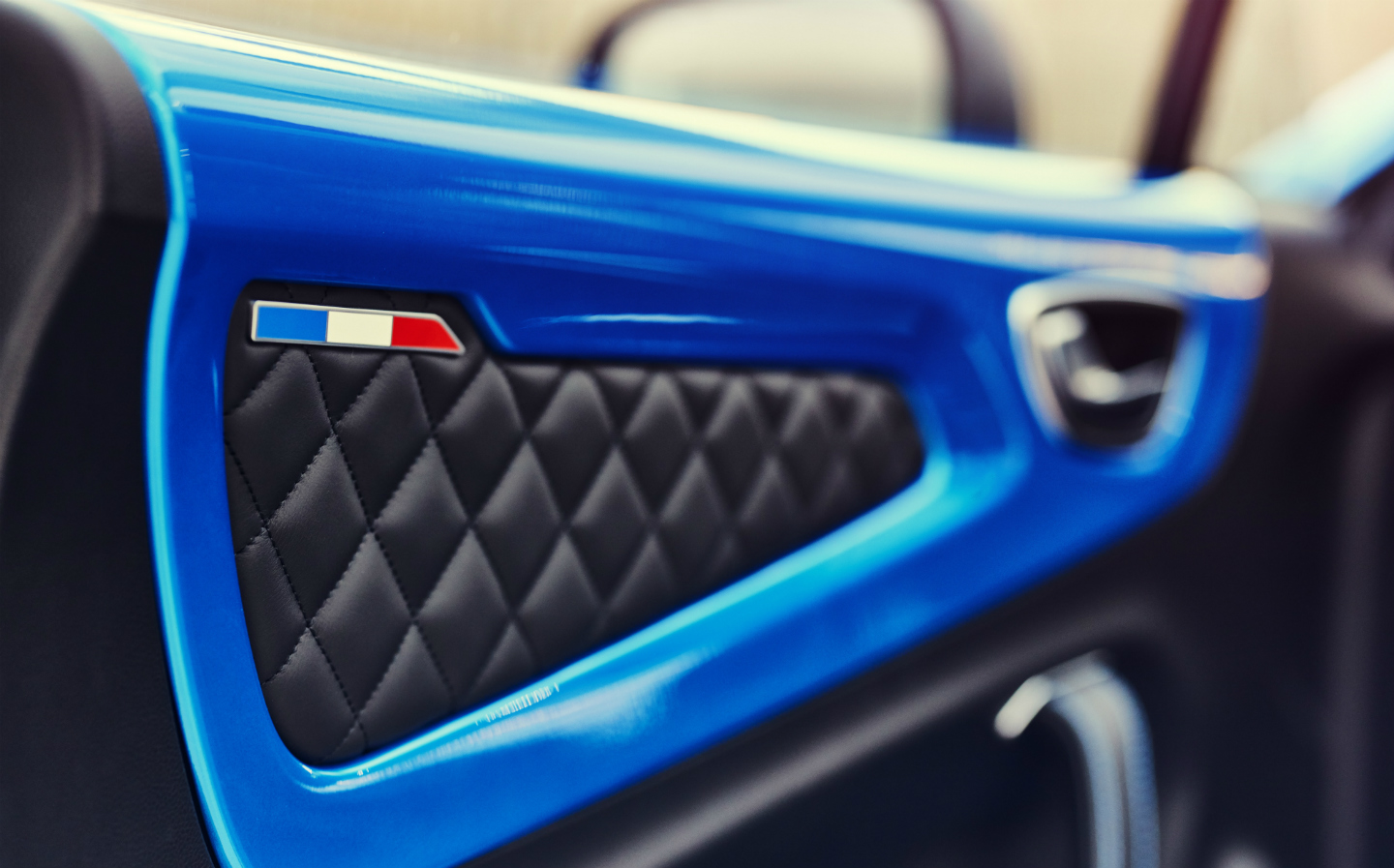 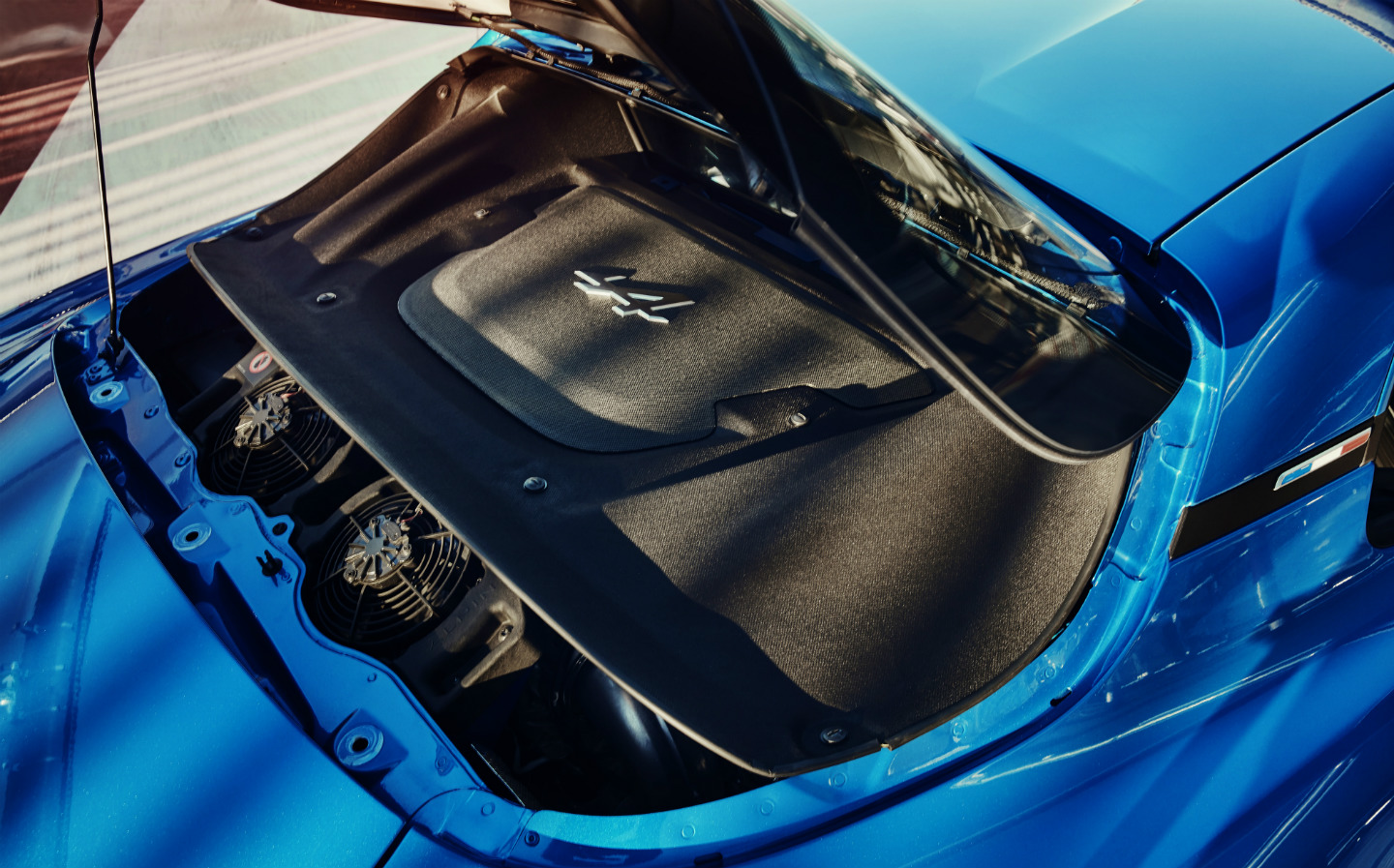 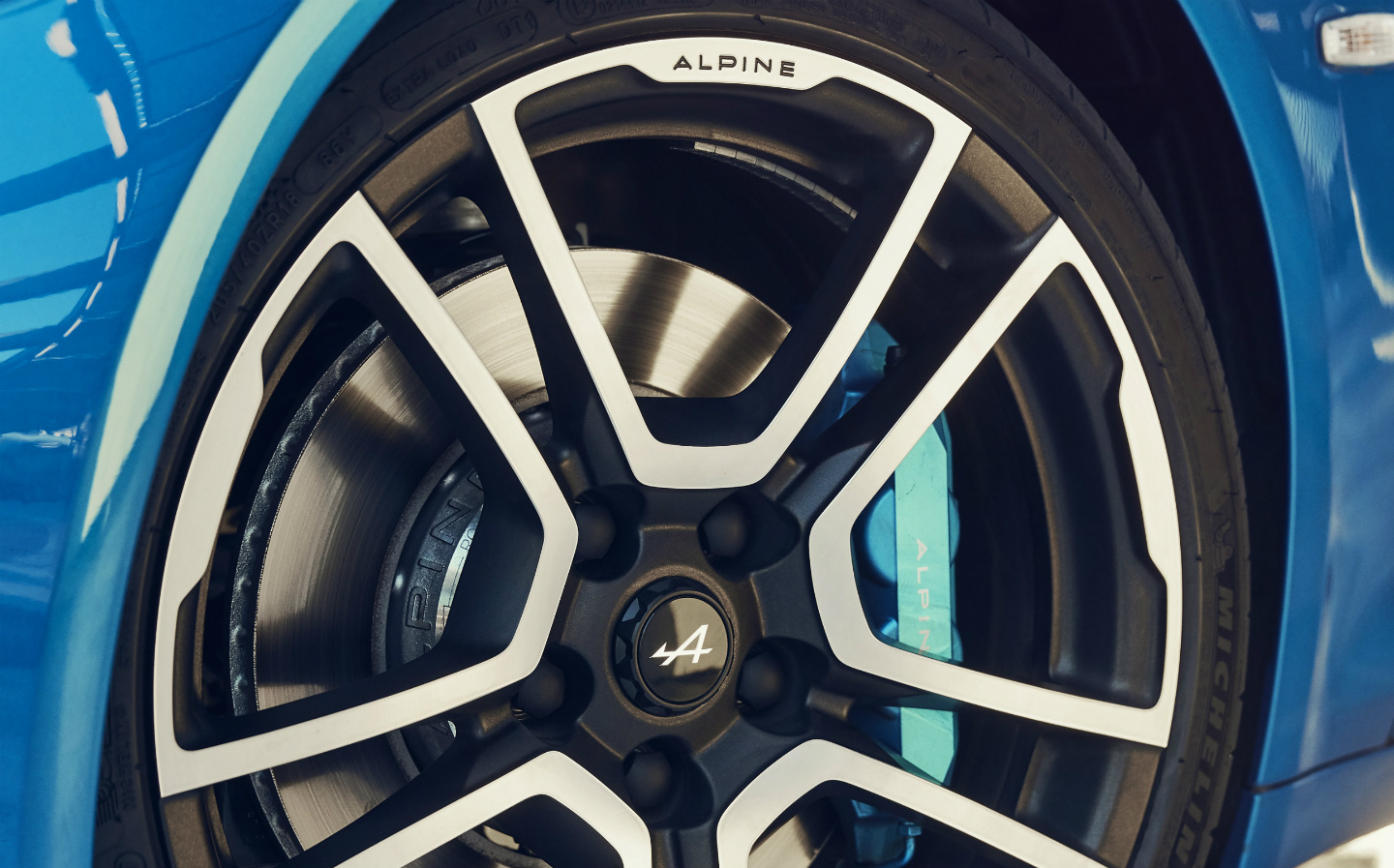 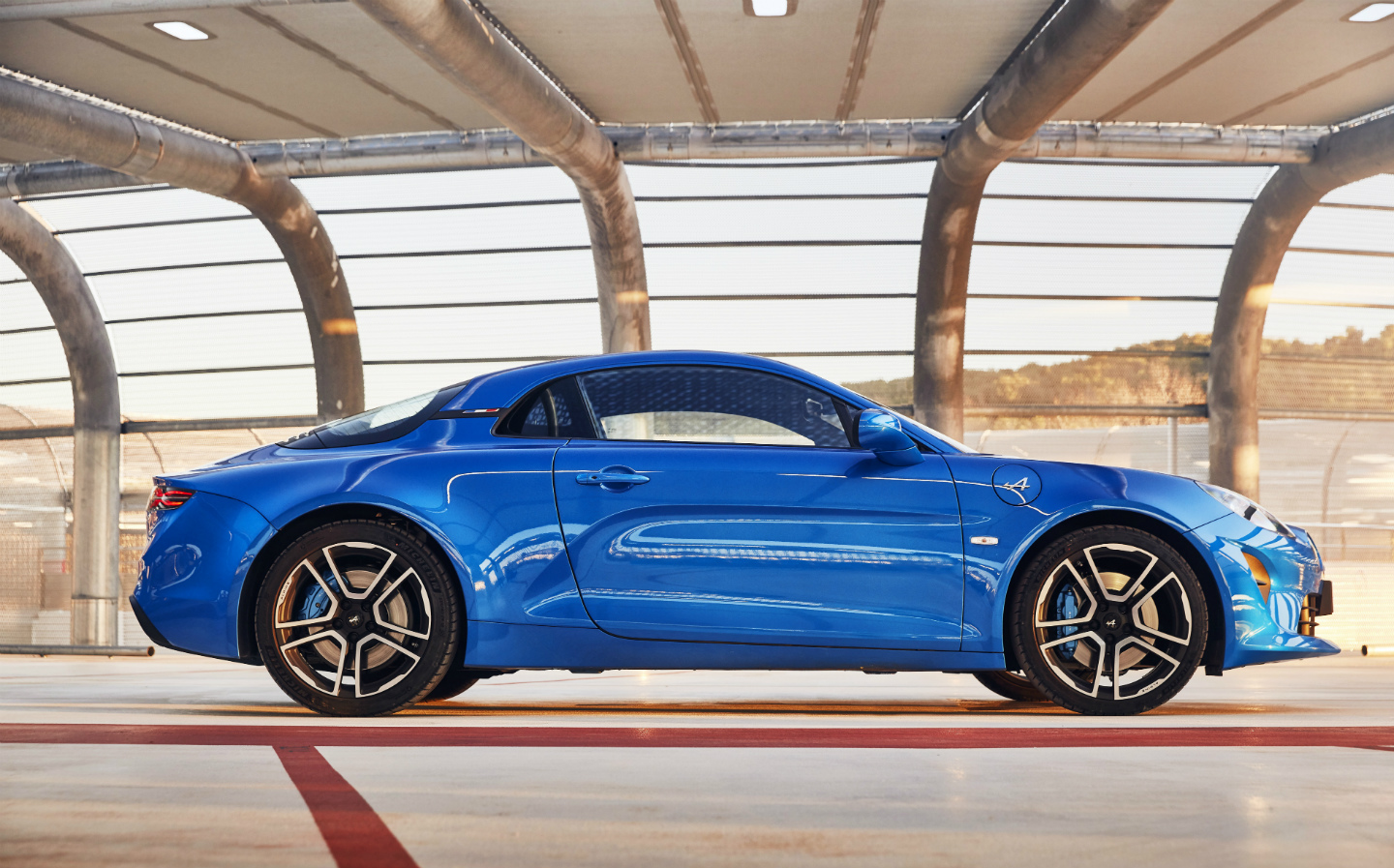 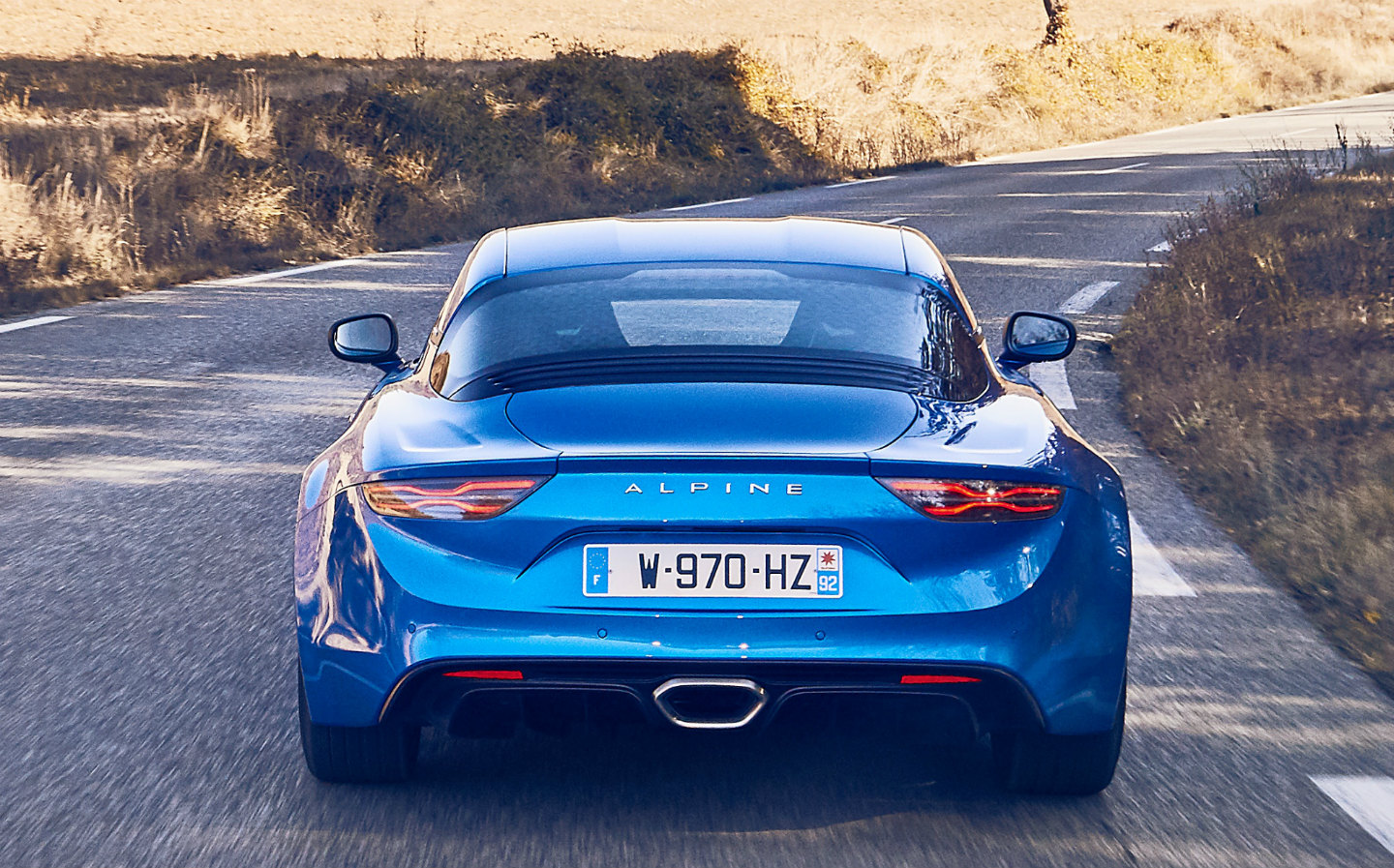 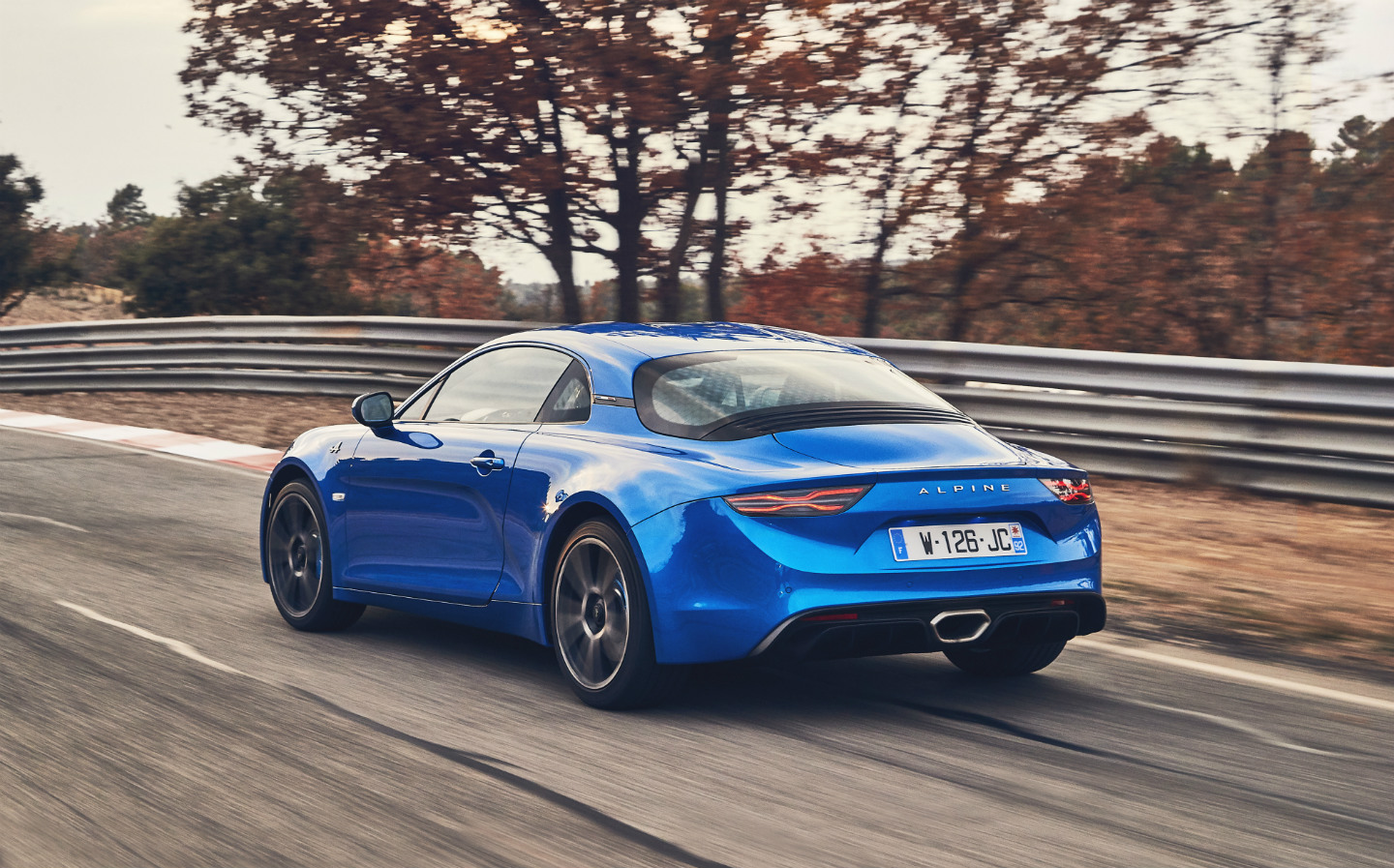 THE FRENCHMAN pulls up behind us at the roadworks, jumps out of his car and dances a jig around the Alpine, putting both thumbs in the air and asking, “Ça marche?” as he reaches the driver’s window. “C’est bien! C’est la meme couleur comme la berlinette!”

Evidently, Jean-Claude is thrilled to see a new A110 on the road. Pleased, too, that the petite proportions and blue paint mimic the original, 1962 ‘A-one-ten’.

But away from the car’s homeland, will drivers give this new two-seat sports car such a warm welcome? After all, who in Britain grows up dreaming of owning an Alpine sports car? How many have even heard of Alpine? It’s a question that must give the designers, engineers and marketing wonks at the revived brand restless nights.

Most car enthusiasts can picture their perfect Porsche. The sound of the engine, blare of the exhaust and shift of the gearstick play out in their mind.

But an Alpine? What do you see? More likely than not, nothing at all, unless you own a 100 year back catalogue of Autocar magazines.

If you haven’t heard of the French marque, you’re not alone. In its home country, where the sports car company is undergoing its second resurrection at the hands of parent company Renault, the name is as familiar as Camembert or Beaujolais. In Britain, more people have dined on a dinner of escargot than seen, let alone owned, an Alpine.

The company hopes to change all that by building a light sports car that’s fun to drive at any speed — a modern interpretation of the original A110, the car that put Alpine on the map.

That last point is important. Increasingly, car enthusiasts can be heard complaining that today’s sports cars are, essentially, too quick for their own good. They often have faster acceleration than an old Formula One car and grip the road as though their tyres have been superglued to the surface. That’s all well and good on a race track, they grumble, but somewhat meaningless when the maximum legal speed on a winding stretch of British country road is 60mph.

Alpine thinks there is demand for a sports car that can be made to dance like Fred Astaire when the driver’s in the mood for fun. One that delivers a two-fingered salute to setting lap times at the Nürbrgring Nordschleife circuit.

To do this, it needed to create a small, light car which would be agile and responsive. This would allow for supple, long-travel suspension and skinny tyres, as there’s less bulk to manage.

“Adding lightness” is Lotus’s philosophy, and you may remember that Toyota and Subaru went down the skinny wheel, comfortable ride tack with the GT86 and BRZ sports cars. However, they have proved about as popular as week-old shellfish.

But the Japanese cars’ technical specification is nothing like as exotic as the new A110. Alpine’s engineers started with a clean sheet of paper – a rare privilege in an industry where economies of scale can make or break a car company and parts-sharing is standard practice.

They wanted a mid-engined car with double wishbone suspension. Carbon-fibre was ruled out for the chassis construction, on the grounds that it’s too expensive, so the structure is aluminium, bonded and riveted like a Lotus Elise, and the rear section is welded, to better cope with the heat of the engine.

The first 1,955 cars — chosen for the year Alpine was founded — are called Premiere Edition. Unlike a Lotus Elise, they aren’t as sparse as a confinement cell. Alpine is adamant this is a car for everyday use.

So there’s carpet, Sabelt sports seats, leather on the dashboard and doors, carbon-fibre trim, a touchscreen infotainment system, digital instruments, climate control and storage compartments in the nose and behind the engine bay. It has a great driving position and feels special — the aluminium footbraces for the driver and passenger are nice touches.

More importantly, the kerb weight of the car is 1,103kg. The regular Pure edition, which will follow and have a little less equipment, will weigh 1,080kg. It makes a Porsche Cayman 718 (1,410kg) look like a walrus.

Engineers from rival car companies privately admit this is impressive; they’re envious of the way Alpine has been let off the leash by Renault and given free rein to go its own way.

It doesn’t take long behind the wheel to appreciate that this approach has paid off: Alpine has created something special. The A110 flows down a winding, bumpy country road with the calm composure of Mary Poppins rounding up children.

It glides where modern sports cars thump, the long-travel suspension soaking up undulations. And bumps in the middle of a bend don’t phase it. Yet there’s little body roll, because there’s relatively little mass to contain.

Use the Normal driving mode and it will happily potter around town or cruise along a motorway in comparative calm. The ride comfort is something of a revelation. Switch to Sport and the powertrain comes alive, responding with added urgency.

At somewhere called Circuit du Grand Sambuc, things get even better. “Whatever you do, don’t switch off the ESP” came the warning from Alpine’s people, worried that cold weather and over-exuberant journalists might see cars laid to waste. Disclaimers had to be signed and promises made.

A handful of laps are permitted in Track mode, which gives the throttle and gearchange the equivalent of a legal high and gets them all excited, lets the driver get away with enough tomfoolery to put a smile on their face, but prevents any embarrassing contact with the crash barriers.

Of course, I did turn off the ESP for the next five laps. We’re here to test the car, are we not? And the A110 really does dance. The track is damp and cold, admittedly, but as you exceed the tyres’ grip the car is eager to use the rear weight bias to the driver’s advantage, setting off a pendulum motion that progressively pivots the tail around the centre of the car.

In most mid-engined sports cars, this would be the point that you close your eyes and hope for the best. In the Alpine, the surprise is that everything happens so gradually that you have time to decide what to do next; correct the slide or apply the throttle and make things even more exciting. So I opt for the latter and the car smoothly drives itself up the road at a jaunty angle to the direction of travel, before pulling straight.

It does this time and time again, out of every corner. Turn-in the nose, feel the weight begin to unsettle the back of the car, get on the gas, unwind the steering and do your best impression of The Stig.

Truth be told, this car will make every driver feel like a driving god, as Richard Hammond once put it. Even on an unfamiliar race track in difficult driving conditions, you trust it implicitly.

After misbehaving in such a fashion, it dawns on you that your heart isn’t racing and your palms are dry. Alpine has made a sports car with which the driver feels at one.

Is it time for drivers to place a deposit? Well, there are a few quibbles. This is a very brisk car, capable of accelerating to 62mph in just 4.5 seconds. But the engine is nothing special. The exhaust does a passable impression of an original A110 1300 on carburetors, gurgling at low revs and popping and banging during gearshifts or as you decelerate. But the engine note is ordinary, especially in a car costing the best part of £50,000.

A manual gearbox would have complemented this car’s personality, but the chief engineer says there wasn’t the budget to offer a choice. The driver’s sun visor needs a cover over the mirror, as it’s distracting when in use, and the view out of the rear window is pretty poor. There’s also nowhere to put a drink – but Alpine says it will have an accessory sorted soon.

But complaining about such things is like grumbling that you don’t care for Cindy Crawford’s beauty spot.

The bigger issue is the price. It’s likely to cost nearly £50,000 (Alpine is still to announce the UK price, before the first cars arrive ahead of the summer) which is more than a Porsche Cayman 718. But the A110 is refreshingly different.

Here, then, is an example of what can be done when you let your hair down. It shows how car makers have been wrong to obsess over building cars that are at home around the Nürburgring. There is more to driving than horsepower, grip and lap times: it’s called fun.

Only time will tell whether that’s enough to ensure Alpine can make a name for itself in the UK.