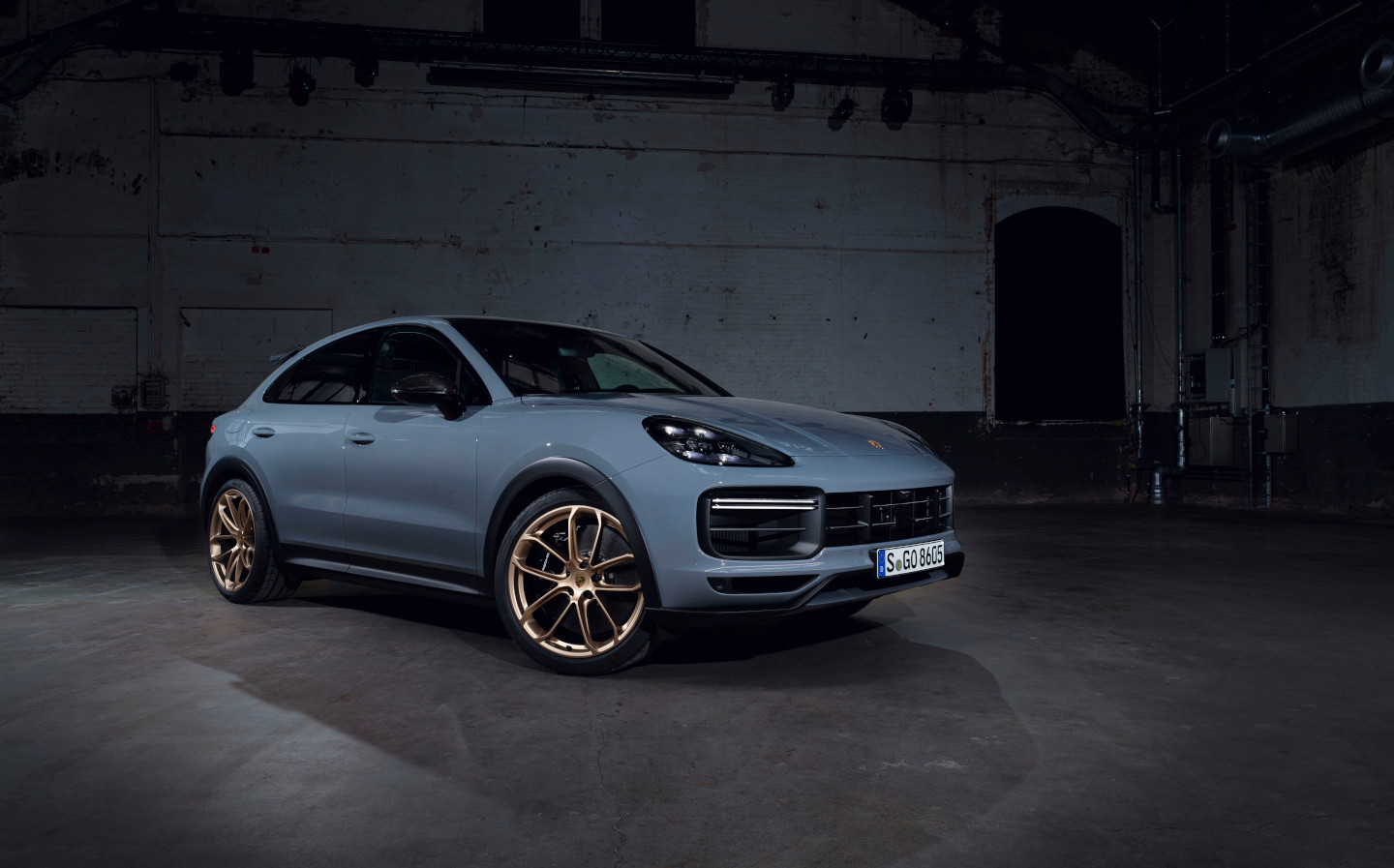 PORSCHE has revealed a Turbo GT version of its Cayenne SUV that it says is “tuned for maximum performance and handling”.

The car is powered by an uprated version of the Cayenne’s 4-litre twin turbocharged V8, tuned to produce 631bhp and 627 lb ft of torque — 89bhp and 59 lb ft more than the engine makes in the Cayenne Turbo Coupé.

This enables a 0-62mph time of 3.3 seconds — shaving 0.6 seconds off the sprint time of the Turbo Coupé — and a top speed of 186mph, making it the most powerful eight-cylinder engine built by Porsche. 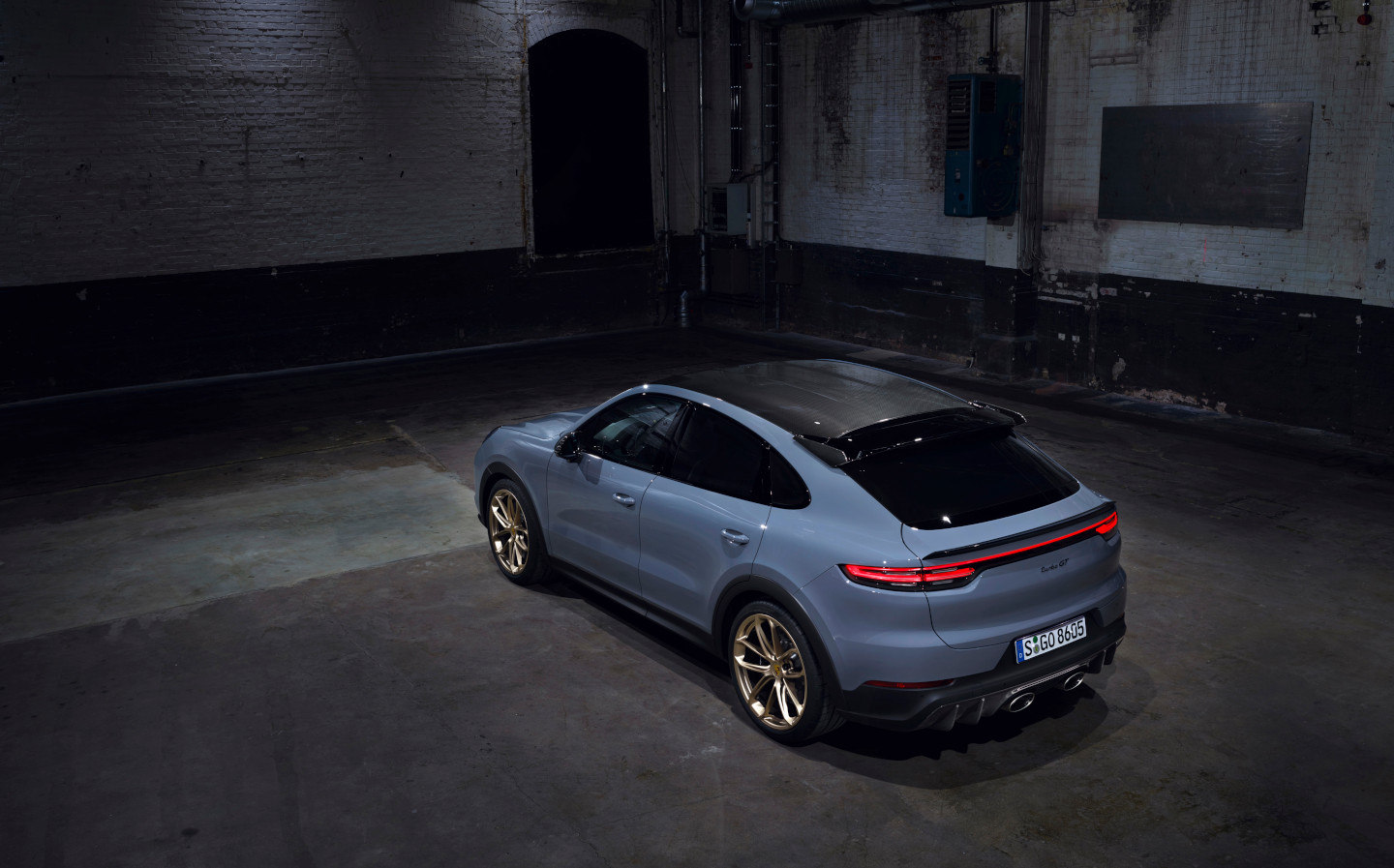 Unsurprisingly, this doesn’t do much for the Porsche’s environmental credentials — fuel consumption is a claimed 20mpg, with CO2 rated at 319g/km.

The Porsche Cayenne Turbo GT will be available exclusively as a four-seat coupé and comes equipped as standard with bespoke Pirelli P Zero Corsa performance tyres and a powertrain and suspension setup that is exclusive to the model.

It sits 17mm lower than the Turbo Coupé, while the rigidity of the air suspension has been increased by 15%. In order to save weight, the standard exhaust system has been replaced with one made from lightweight and heat-resistant titanium. 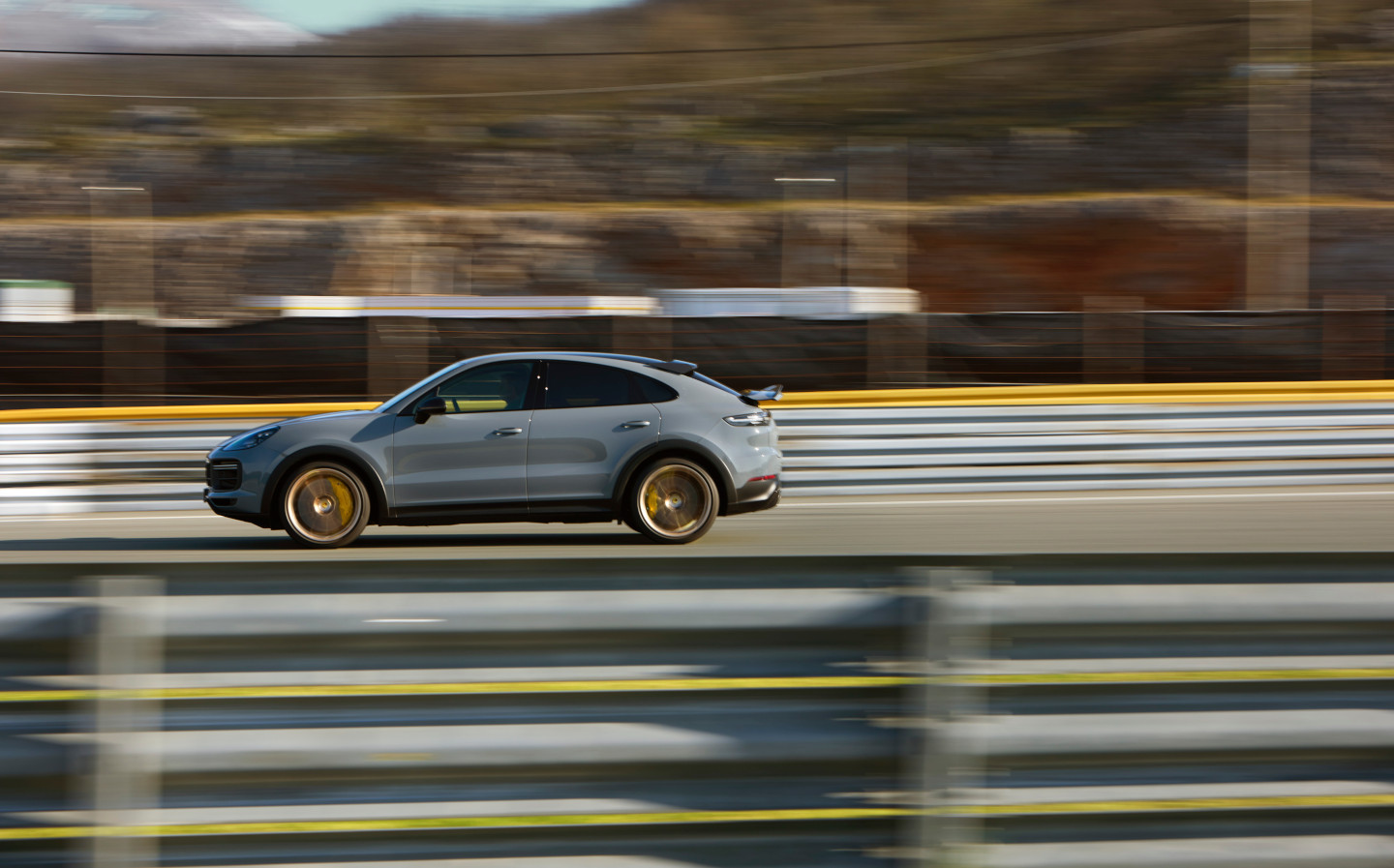 These power increases and chassis tweaks are proven to have a big impact on the Cayenne’s performance — driving the Turbo GT, Porsche test driver Lars Kern set a new lap record for SUVs at the Nürburgring Nordschleife race circuit in Germany (where else) with a time of 7 min 38.9 seconds.

The most noticeable design feature of the Porsche Cayenne GT turbo are huge 22in wheels, which are not only large but broad — an inch wider at the front than the ones used on the Turbo Coupé. 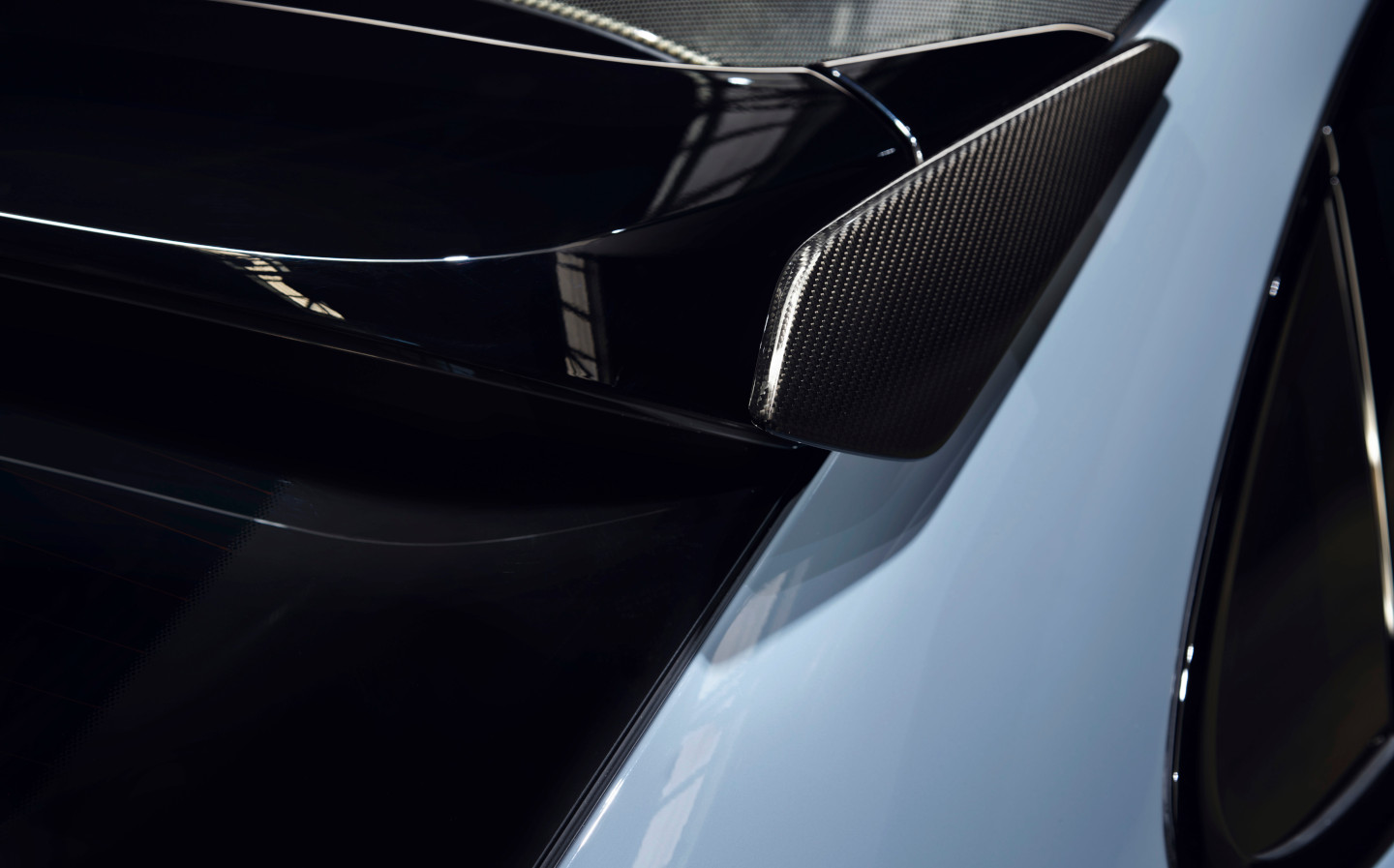 There’s also an adaptive rear spoiler that when deployed does nothing for the aesthetics of the rear end but adds 40kg of downforce at top speed, according to Porsche.

The design is rounded off by a bespoke front apron and a carbon rear diffuser, while a new hue has been made available: Arctic Grey.

Porsche has upholstered the inside of the car in swathes of Alcantara. Front seats are eight-way adjustable, while two sports seats in the rear come as standard.

Porsche has been careful not to make the interior too Spartan, and has included its next-generation infotainment system, making it one of the first Porsche cars to be Android Auto-compatible. 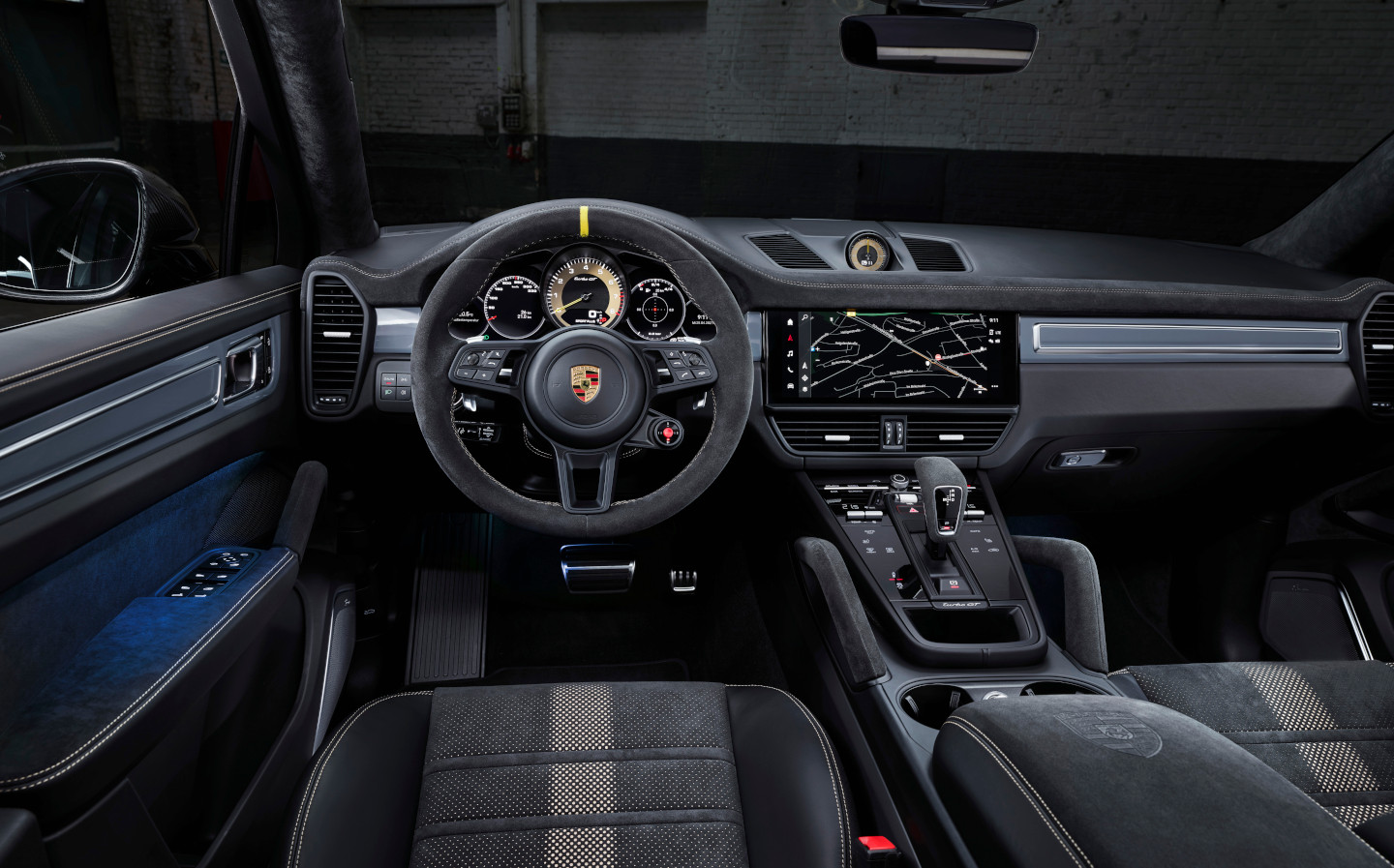 It will come as no surprise that the range-topping Cayenne comes with a hefty price tag — prices start at £143,910, nearly £83,000 more expensive than the standard model. It is available to order now, with deliveries expected to commence this autumn.