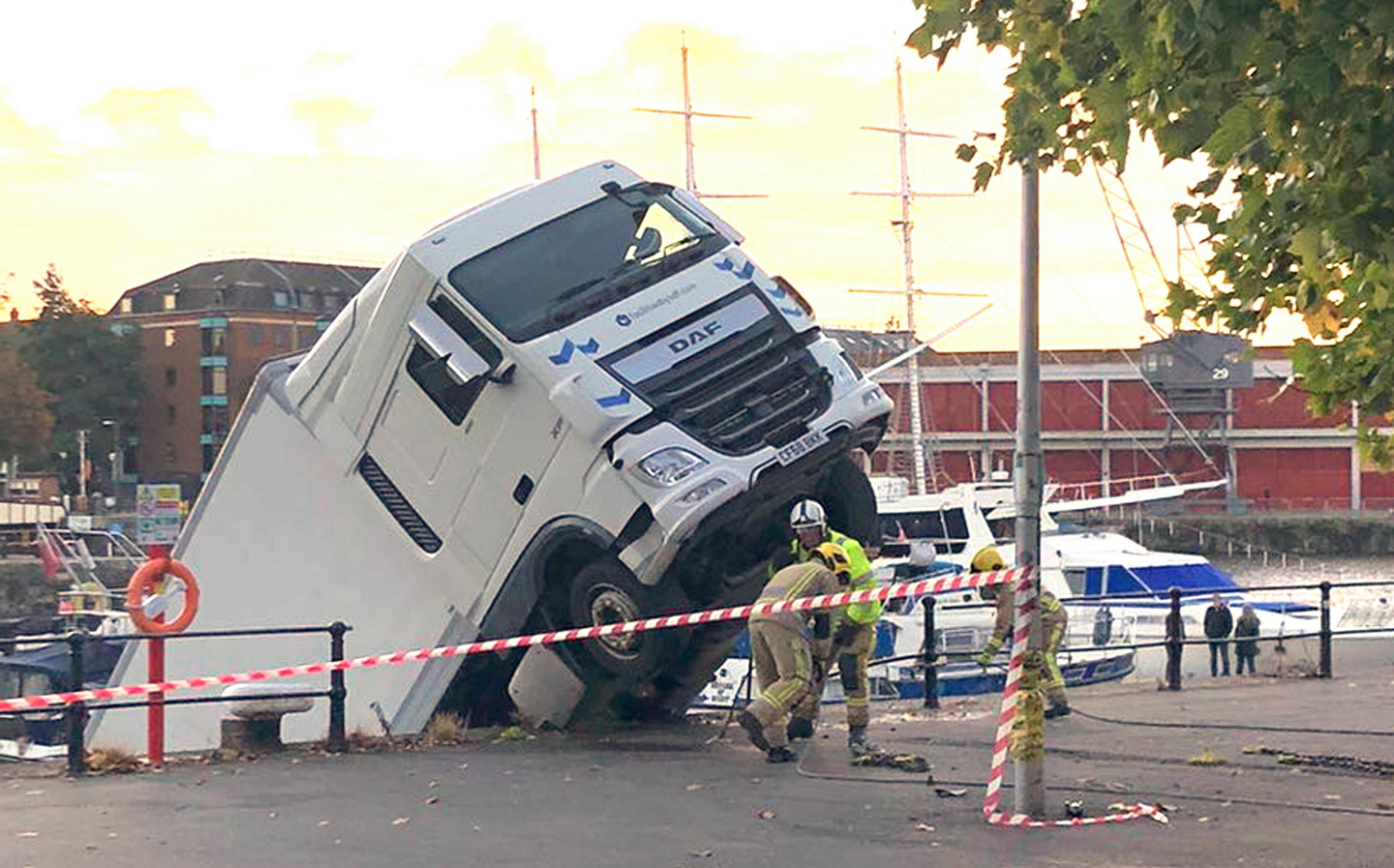 A LORRY and trailer have fallen into a harbour in Bristol during the filming of a new BBC comedy series.

Emergency services arrived on the scene at around 7.20am on Thursday morning to find a lorry with its Daf tractor unit balanced precariously on the edge of the harbour wall and its trailer partially submerged in the water.

The driver, though said to have been shaken-up, managed to escape uninjured from the lorry cab before the rescue services arrived.

In order to prevent the lorry sinking further into the harbour, rescue services deployed three fire engines, a heavy tender and a boat. A cordon was put around the area and other boats in the vicinity were evacuated as a precaution. The lorry was then hooked to two winches using nearby trees for support and secured, according to the fire services, before the fuel tanks were drilled and syphoned.

“Getting out of the harbour is much harder”.
A film production trailer has ended up in Bristol docks pic.twitter.com/z59bJaKwHd

One witness, Phil Worgan, who was staying on a nearby boat and heard shouting followed by a large crash said:

“I thought someone was about to jump or was in the water but when I looked, it was a truck. Apparently, they were trying to hook it up and it just rolled in.”

Another witness, David Hill, arrived at the scene after the lorry had gone in:

“I’ve seen people go into the harbour, even a statue, but never a lorry,” referencing the fact that the harbour was the site into which protestors rolled a toppled statue of the slave trader Edward Colston, in 2020.

“I was just heading out of the door on my way to work, and made a small detour out of curiosity to see what happened. There were several fire engines, a couple of ambulances and police cars, and then right in front of me was the partially submerged lorry.”

The trailer is owned by Wandering Star Facilities and was being rented as part of the costume unit of a BBC comedy series, The Outlaws, which is set in Bristol and was filming scenes in the area.

The Outlaws stars Christopher Walken, Eleanor Tomlinson and Stephen Merchant, the latter of whom is one of the series’ creators. Merchant also co-created with Ricky Gervais the breakthrough UK comedy series The Office. The Outlaws concerns an unlikely group of lawbreakers thrown together on a community service scheme.

It is understood that the crew was packing up to leave the area after completing night time filming earlier.

A production spokesperson for the series said: “We are investigating what happened and working on removing the vehicle as quickly and safely as possible.”