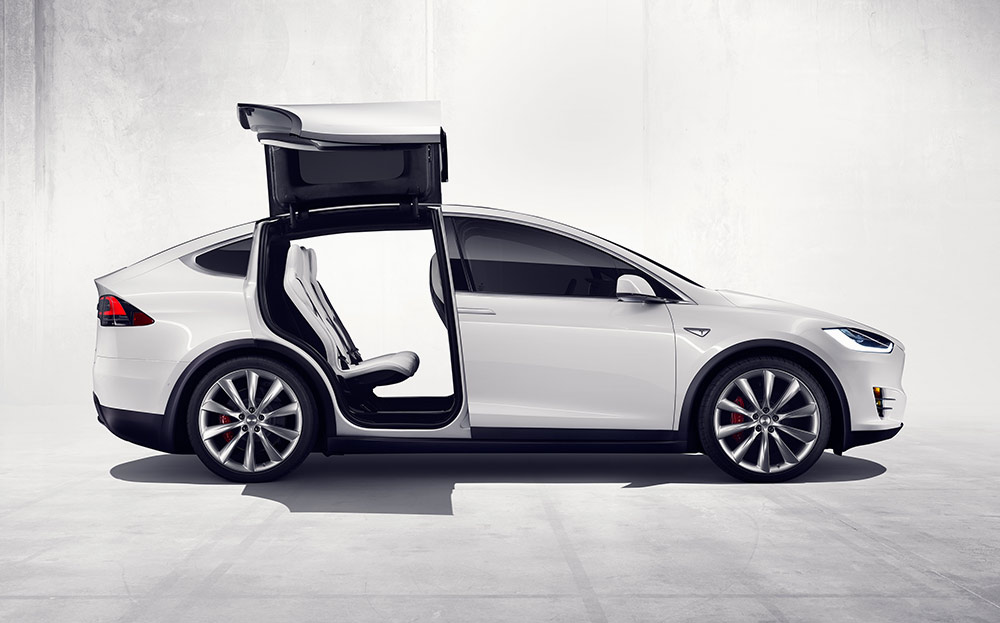 ELON MUSK has been making headlines around the world as the real-life version of Iron Man’s eccentric alter ego, Tony Stark. As well as creating reusable rockets and dreaming of a super-fast “Hyperloop” transit between Los Angeles and San Francisco, the 45-year-old is an evangelical enthusiast of electric vehicles.

His Tesla car brand has gone from a quaint sideshow to a real player in a few apparently easy steps. First he launched a low-volume sports car, the Roadster, partly based on a Lotus Elise. Then there was the Model S, which has sold in big numbers, especially in its California heartland. The third incarnation, which is just hitting these shores in right-hand drive, is the Model X. Unlike the S, which looked much like an everyday saloon, the X is unashamedly futuristic.

While there is a host of technology built in, its party trick is undoubtedly its “falcon” doors, which open at the touch of a button. They must have cost a great deal of time and money. The company’s investment in them — where others might have given up — provides an insight into Musk and Tesla. Both have attracted a cult-like following that may yet pay dividends.

If the doors are its obvious showstopper, then speed is its hidden one. I have always been a fan of “sleepers” — cars that don’t look fast, but are surprisingly so. The X takes this to another level. Sitting at traffic lights, this car blends in with the sea of SUVs. That is, until you put your foot down.

It’s staggeringly quick, taking 2.9 seconds, in range-topping P100D form, to reach a silent 60mph. There’s no blasting away in a roar of engine noise and cloud of smoke. It feels more like being catapulted into the air in a theme park ride.

I like to think of myself as a red-blooded male with a fondness for thumping V8s, but I came to enjoy the near-silent propulsion, which feels calm and civilised. After all, silence is what luxury car makers have been striving (and charging) for. However, if you tire of peace and quiet, the sound system more than makes up for the lack of engine noise. In a typical Tesla quirk, the volume goes up to 11.

I like to think of myself as a red-blooded male with a fondness for thumping V8s, but I came to enjoy the near-silent propulsion from the all-electric power

The lack of engine makes for a spacious cabin with three rows of seats and no transmission tunnel. There’s also a boot in the back and a trunk in the front (or frunk, as Tesla likes to call it). Inside, the dashboard is dominated by a huge touchscreen. Except for the steering wheel, wipers, indicators and cruise-control stalks, almost everything is controlled by it, which is handy for anyone used to a smartphone.

The Model X has the feel of a next-generation electric car that may bring more converts. It’s the first electric car I have driven that didn’t make me feel as though I work for Uber. Range anxiety, the bête noire of electric power, is largely eliminated: you’ll get nearly 300 miles on a full charge, and the navigation system estimates when you need to stop and gives you directions to the nearest power point.

Strong competition will be arriving soon from Jaguar, with its I-Pace model, Audi’s Q6 e-Tron and the Mercedes EQC. All will be cheaper than the Tesla. For the moment, there is nothing else quite like it on the market, and the order books have been filling up fast.