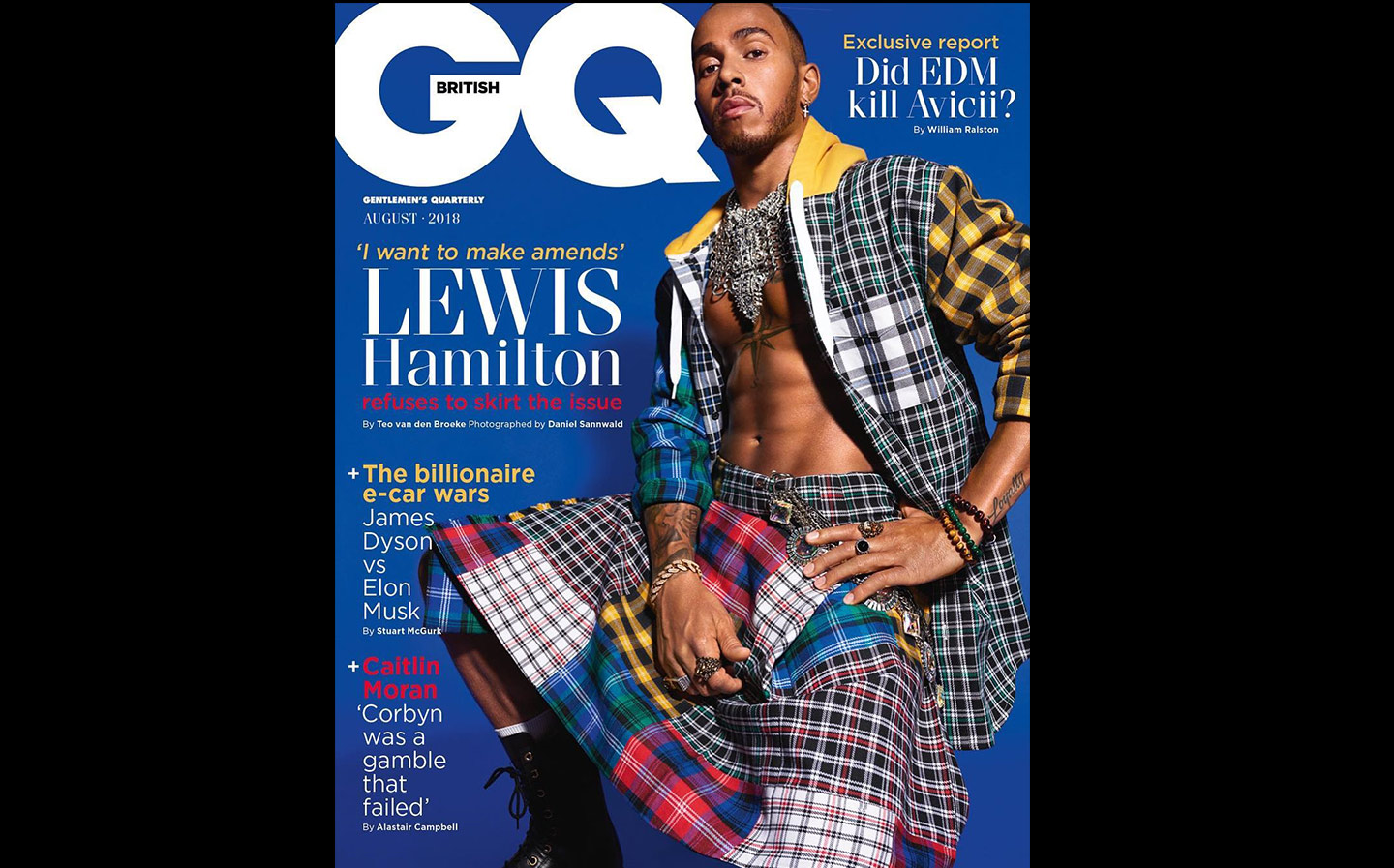 LEWIS Hamilton has appeared on the cover of British GQ wearing a kilt in response to the controversy he sparked at Christmas, when he told his nephew that “boys don’t wear dresses”.

In December last year, the F1 driver, 33, an avid user of social media, sparked outrage when he shared a video on Instagram berating his young nephew Kaiden for wearing a pink and purple princess dress.

The clip opened with Lewis filming himself saying: “I’m so sad right now…look at my nephew.” Hamilton then turned the camera on his nephew, who looked over the moon while waving a wand.

As an ‘Instagram Story’, the video dropped off the social network within 24 hours but it was preserved by others on YouTube.

Hamilton later apologised, saying that his nephew should feel “free to express himself as we all should.”

He wrote: “Yesterday I was playing around with my nephew and realised that my words were inappropriate so I removed the post. I meant no harm and did not mean to offend anyone at all.

“I love that my nephew feels free to express himself as we all should. ‘My deepest apologies for my behaviour as I realise it is really not acceptable for anyone, no matter where you are from, to marginalise or stereotype anyone.

“I have always been in support of anyone living their life exactly how they wish and I hope I can be forgiven for this lapse in judgement.”

The racing driver has now gone even further to demonstrate his apparent repentance, donning a patchwork tartan kilt, designed by Tommy Hilfiger, for which he is a brand ambassador, before swapping into a black kilt as an acknowledgement of his mistake.

‘I want to make amends’ Why @lewishamilton refuses to skirt the issue. At Vogue House we think of the cover as a powerful act of personal conviction, which acknowledges Hamilton’s increasingly brave fashion sense, while offering a very public apology, a multicoloured tartan mea culpa. Story by @teovandenbroeke, styling by @luke_jefferson_day, creative direction by @paulsolomonsgq. BIO LINK TO BUY THE ISSUE! (?@danielsannwald) Kilt by @tommyhilfiger. Boots and shirt by @tommyhilfiger x @lewishamilton // Follow #GQ Editor @dylanjonesgq

Speaking about the video of his nephew, Lewis said: “I still hold regret for it today, but ultimately I think it’s important in life for people to be held accountable for their actions and particularly their words, and I was.

“I’ve been through quite a lot [of criticism], although there are things I regret in my life, I wouldn’t go back and change them, because if I did I wouldn’t be the man I am today, I wouldn’t have the mindset I have today. ‘I wouldn’t have grown if I hadn’t fallen and stumbled and gotten back up.”

To mark the 2018 British Grand Prix, Lewis Hamilton will feature in an exclusive and extended Me and My Motor interview with Driving in this weekend’s Sunday Times Magazine. Available wherever you pick up your paper, online at thesundaytimes.co.uk or on mobile and table editions. Subscribe from just £1 per week here.

Lewis Hamilton’s £165,000 luxury Maybach limo is up for sale … on Auto Trader