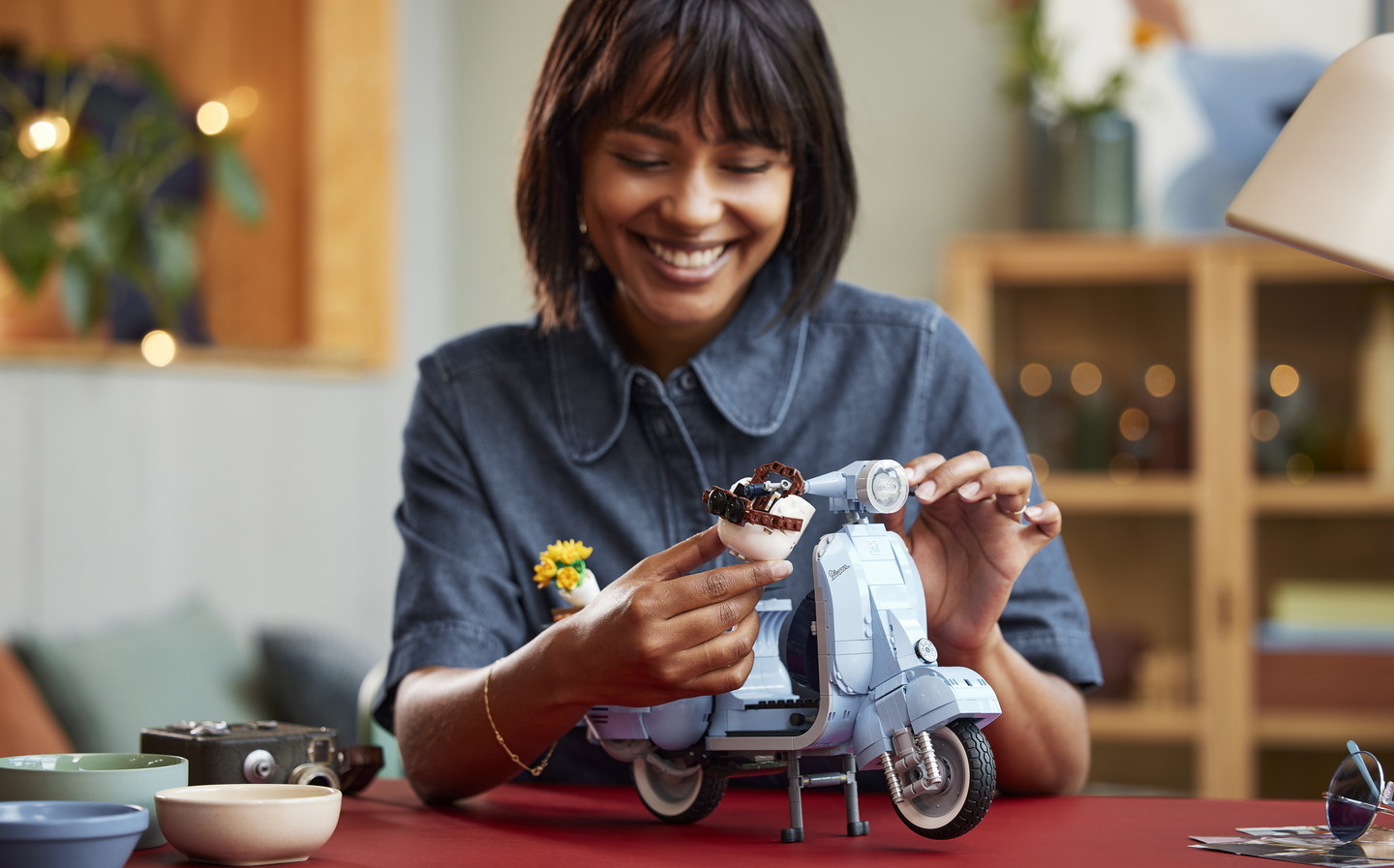 Lego has announced the launch of the first official brick version of the Vespa scooter, the classic and ubiquitous Piaggio motorcycle that saw millions of Italians motorised and mobilised in the period following the World War II.

The 1,106-piece kit is “designed to help style lovers find a moment of mindfulness through Lego building” and is a detailed rendition of the Vespa 125, a version of the scooter from its 1960s heyday.

Finished in pale pastel blue, the Lego Vespa 125 features attractive little details such as a bunch of flowers in the bike’s basket (which attaches to the luggage rack), the rider’s helmet, kickstand, working steering and a removable cover to reveal the brick-built engine.

“Recreating the details of the original model to celebrate the classic 1960s Vespa was one of my favourite parts of designing this set,” said Florian Muller, senior designer at Lego. “The set offered me a chance to step back in time and let my imagination flow while designing, and we hope the experience is the same for fans.”

With more than 1,000 parts and its 18+ designation, the Lego Vespa is more aimed at adults than children, though assembling kits like this can often be a fun activity for parents and kids to work on together.

This isn’t the first time that Lego has released a rendition of such a quintessentially Italian machine. Its Lego Creator Expert Fiat 500, finished in the same pale blue colour, could potentially provide a companion piece to the scooter for Italophiles, even if the scooter model towers above the car.

Working with the Lego on creating the officially licenced Vespa was “an extraordinary experience” according to Marco Lambri, head of design at Piaggio.

“As designers, the challenge was to have the soft shapes of Vespa coexist with the form of Lego bricks, a challenge I believe we met with flying colours,” he said.

Following World War II, with supplies limited and wartime aircraft companies such as Heinkel, Messerschmitt and Piaggio essentially banned from building aeroplanes, many turned to scooters to keep their factories open.

Piaggio’s scooter, the MP6, was known as the Vespa (the Italian for “wasp”) thanks to not just the buzzing noise its engine made but also the shape of its body and handlebars, which are said to resemble the shape of the winged insect.

Over time, in addition to being a fun, classless runabout for Italians, it became a global design icon, partially thanks to films such as Roman Holiday, a 1953 Audrey Hepburn and Gregory Peck picture that saw one of the scooters being ridden through the streets of Rome.

Other stars such as Marlon Brando, John Wayne and Charlton Heston were photographed riding Vespas while filming in Italy, making the utilitarian scooter synonymous with style and glamour in much the same way as the Mini in Britain.

Vespa clubs began to crop up worldwide and, for a time in the ’60s, the UK was Piaggio’s largest market for the scooter.

Vespas, along with Lambrettas, took a starring role in the 1979 film Quadrophenia, the mods v rockers feature set in 1960s London.

To date, close on 20 million have been sold in addition to countless imitations and knock-offs from other manufacturers. Britain remains the company’s second biggest market for the Vespa.

The Lego Vespa 125 goes on sale from March 1 from Lego.com, Lego stores globally and other stockists and is priced at £89.99.

Driving.co.uk may earn revenue if you purchase the products featured via a link in the article.